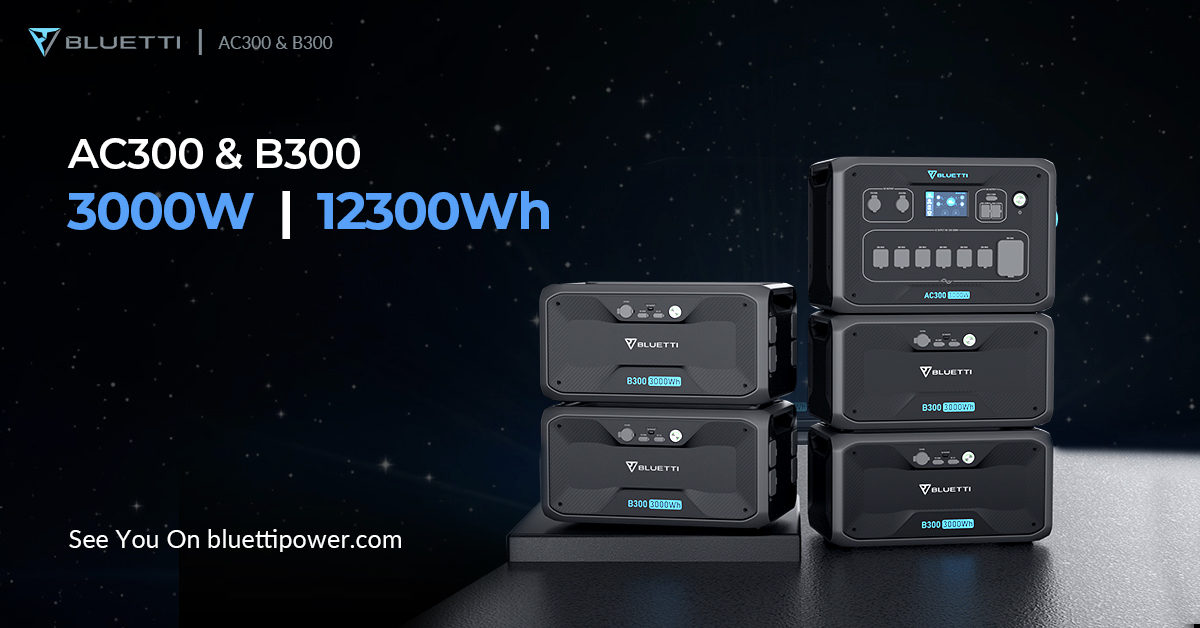 Bluetti, makers of battery backup systems both large and small, have announced its modular take on the home battery backup. With the Tesla Powerwall only available to solar roof customers (and backorders up the wazoo), many are dipping their toes into vehicle or home backup systems from the likes of Bluetti.

Bluetti’s popular kickstarter campaign for the EP500 funded a large battery backup tower intended to sit quietly out of sight. It’s a neat-looking R2-D2-sized unit, but running cables down to the garage doesn’t work for some customers. With power demands located deeper in the home, Bluetti has made a modular system to take power where you need it.

The main AC300 unit has a max output of 3000W to power the its various outputs: 110v home outlets, USB, USB-C, 12v car output, and more. Unlike the AC200, the AC300 has no internal battery pack. The adjoining B300 battery unit holds 3072Wh each, and can support the various outputs of the AC300 unit. Up to four B300 batteries can be connected in parallel, making for a max energy storage of 12.3kWh.

This way, the modules can be separated and carried individually to take power where you need it, and you can customize the needs of your home. If you’re only powering a small camping trip, Bluetti also has a smaller modular battery (the B230) that has a capacity of 2048Wh.

Using the Fusion Box Pro (center in the above image), homeowners can combine two of the total systems together for double capacity. The total capacity of these systems can reach staggering levels. Bluetti writes:

Under the hood, there is a 3,000W pure sine wave inverter and an MPPT controller which can support up to a staggering 2,400W of solar charging. A single AC300 supports up to four battery packs for a whopping total of 12.3kWh of capacity. Do you still feel like that’s not enough power? With Bluetti’s Fusion Box Pro, you can connect two AC300s to double the power and capacity at the same time! Boast up to 6,000W of continuous power, 24.6kWh capacity in total, and 10.4kW of groundbreaking solar input capability! This setup can be an emergency power center and run your home essentials for over a week, or with enough solar panels, you can even run your entire whole house, off-grid… indefinitely.

If the smaller all-in-one system suits your lifestlye, you’re in luck. Bluetti has also upgraded their AC200 power supply to the AC200 MAX. We previously covered the AC200, and you can watch the video review on this page here. The upgrades are based on customer feedback and include:

Bluetti is also teasing a larger system in the works. The AC450 Apex will have 4,500W of power, and presumably fit into a rectangular black box with a question mark on it.