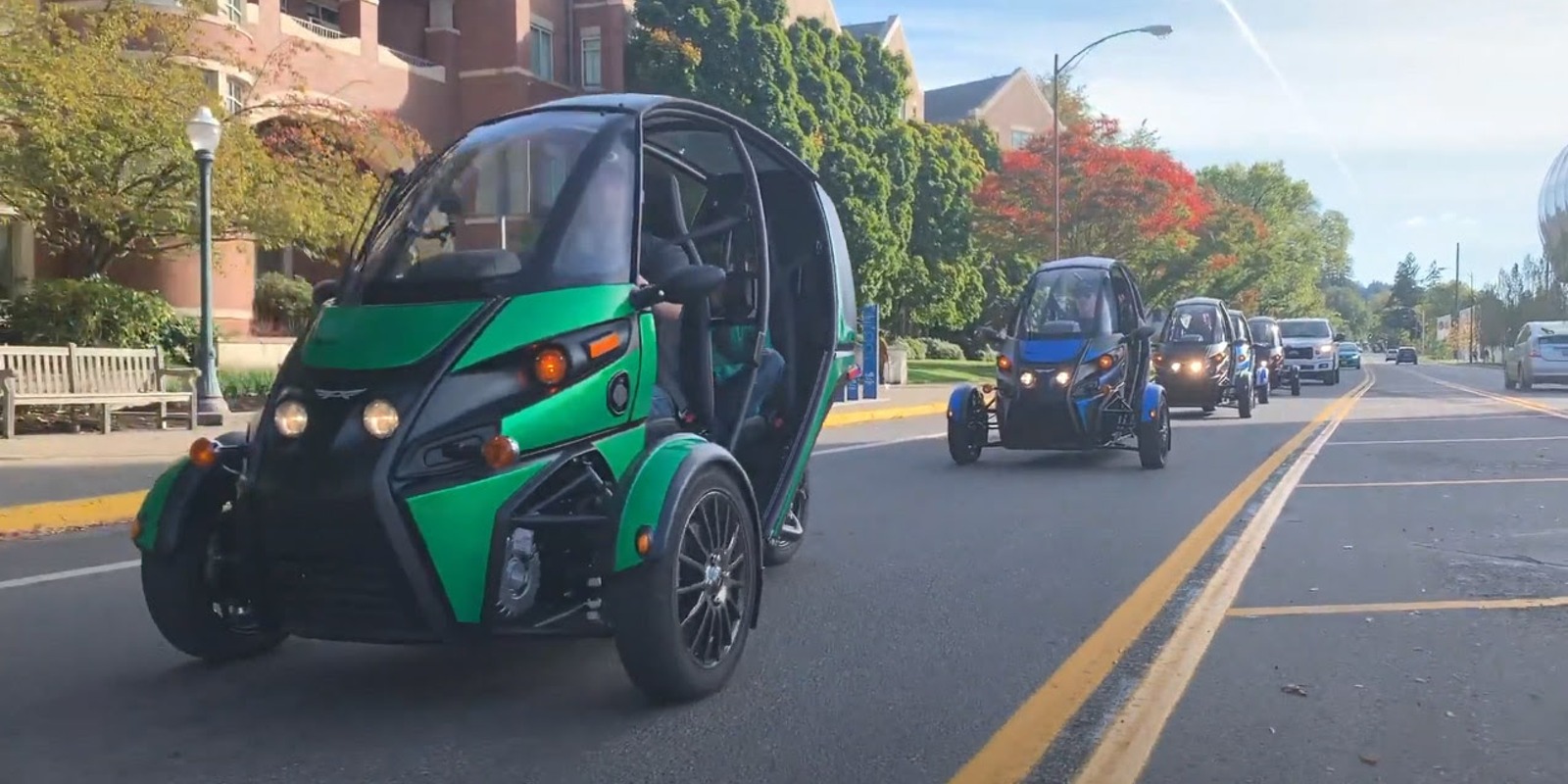 Arcimoto knows its stuff when it comes to three-wheeled electric vehicles, and Lightning Motorcycles is no stranger to breaking speed records. Now the two companies are combining their expertise in an attempt to build the fastest-tilting electric motorcycle in the world.

The project is enabled by Arcimoto’s acquisition of Tilting Motor Works earlier this year.

Tilting Motor Works developed the TRiO kit, which is one of the most popular three-wheel conversion kits used for touring motorcycles.

The tilting technology in the TRiO kit allows riders to lean naturally into turns, making three-wheelers handle more like conventional two-wheeled motorcycles. It also adds stability when stopped, meaning riders don’t need to put their feet down to balance the bike at red lights.

All of Arcimoto’s current three-wheeled electric vehicles are non-tilting models, so they aren’t able to lean into turns. They are still a blast to ride, as you can see in my review video below from my test ride, but the tilting technology makes leaning 3-wheelers even more natural to operate.

To send the three-wheeled conversion kit flying faster than ever before, Arcimoto has teamed up with California-based Lightning Motorcycles.

Now the bike is set for the three-wheeled treatment as it attempts to set a new record.

As the world’s leading manufacturer of high performance electric motorcycles, we are excited to bring our technology and know-how to the collaboration with Arcimoto for the three-wheel market. The convergence of our proprietary technology, the market adoption of EVs, and the widely recognized environmental benefits of clean energy propulsion make this an excellent and exciting time to bring these vehicles to the mass market. Our vision is to see Lightning’s electric motorcycles provide performance-oriented and environmentally conscious transportation, as well as adrenaline inducing fun, for both new and experienced riders all over the world. This collaboration amplifies our vision. It’s an honor to build the first electric bike outfitted with the TRiO alongside ‘Bonneville Bob Mighell,’ who has proven throughout his career that trikes can, and should, fly.

He set his own land-speed record for three-wheeled motorcycles at the 2013 Motorcycle Speed Trials held at the Bonneville Salt Flats.

From the moment I met Richard Hatfield and saw the Lightning for myself at Bonneville, I knew there was the potential to create an electric trike unlike anything in the history of motorcycles. This will be the first time we outfit an electric bike with the TRiO kit, and it certainly won’t be the last, as we drive toward a sustainable future faster than ever before.

This is a pretty cool project and will be a great way to showcase the TRiO tiling kit on an electric setup. But we can’t ignore the elephant in the room here.

While the LS-218 has long been Lightning’s major claim to fame, the company’s opaque rollout of a more mass market motorcycle, the Lightning Strike, has often overshadowed the record-setting superbike and marred Lightning’s reputation in the industry.

The Strike was unveiled in early 2019, right around the same time as the Zero SR/F. While the latter has gone on to see large global sales and a wide range of media reviews (including my own), the Lightning Strike has more or less faded into obscurity with unclear sales numbers and no reviews from major media. There are only a handful of documented owners, and those bikes have come with severely underwhelming performance compared to the lofty promises originally made ahead of the Strike launch.

So while this should be an interesting project, and while Lightning has proven that it can build high-performance electric superbikes, the company has a long way to go to rebuild industry faith in its ability to deliver on its promises.