Unlike the legions of interesting but questionably vaporware concept electric motorcycles floating around the internet these days, the Zero SR/F is a powerful, sporty bike that you can actually find in dealerships. It combines high power with an aggressive ride that is sure to turn a boring commute into an ear-to-ear grinning experience.

Zero Motorcycles let me borrow a 2020 SR/F Premium for a little over a week so I could get the full experience of the bike.

From flying fast on five-lane highways to carving up single-lane canyon roads and even doing a bit of plain ol’ grocery shopping, I integrated the SR/F into my daily life and came away majorly impressed.

As the highest power bike in Zero’s lineup (now tied with the new Zero SR/S built on the same platform), the SR/F isn’t for the faint of heart. But that doesn’t mean it’s difficult to ride, either. It somehow combines the ferocity of a beast with the ease of a beginner bike. That’s partly due to how easy all electric bikes are to ride, but is also a testament to Zero’s extensive experience in the electric market. The company has been building electric motorcycles for well over a decade now, and that experience shows.

Pictures aren’t enough. You’ll want to see this bike in action. Check out my video review below, then keep reading for the rest of my SR/F review. 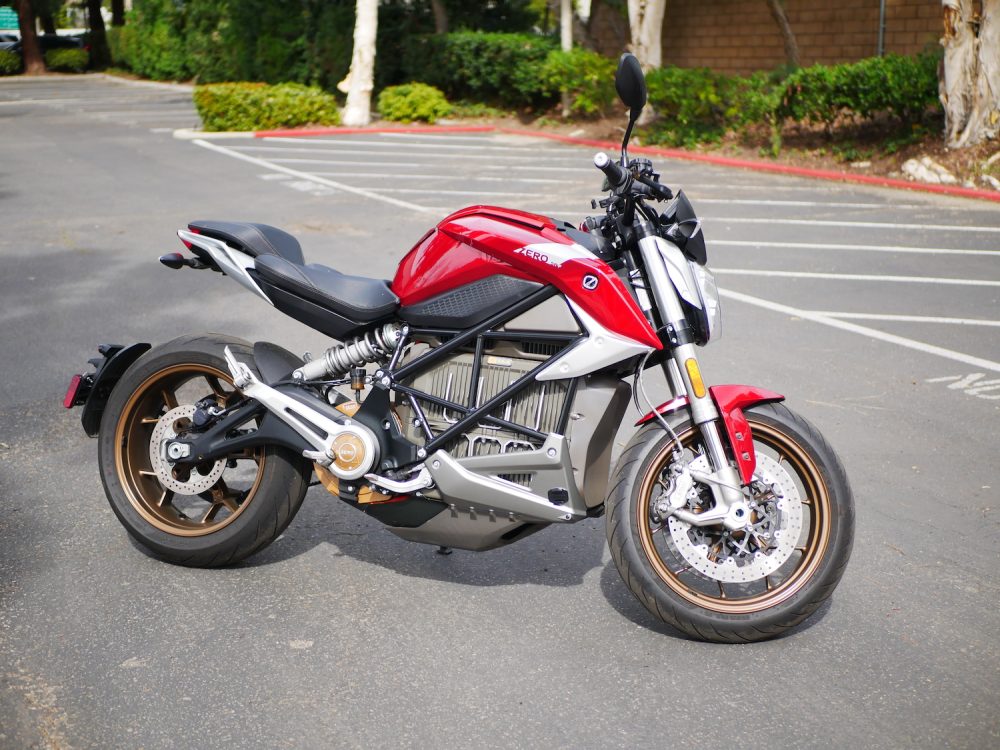 As I mentioned, the SR/F isn’t one of these concept motorcycles or a low-volume production bike like the Lightning Strike.

It’s in showrooms across the country, and you can ride one home today. So that already puts it in a fairly select group.

There are two models available. I was on the Premium version, which runs for $21,495. There’s also the Standard version that starts at $19,995. The major difference is that the premium version has a 6kW on-board charger instead of a 3kW on-board charger, which cuts charge time in half at Level 2 charge stations. 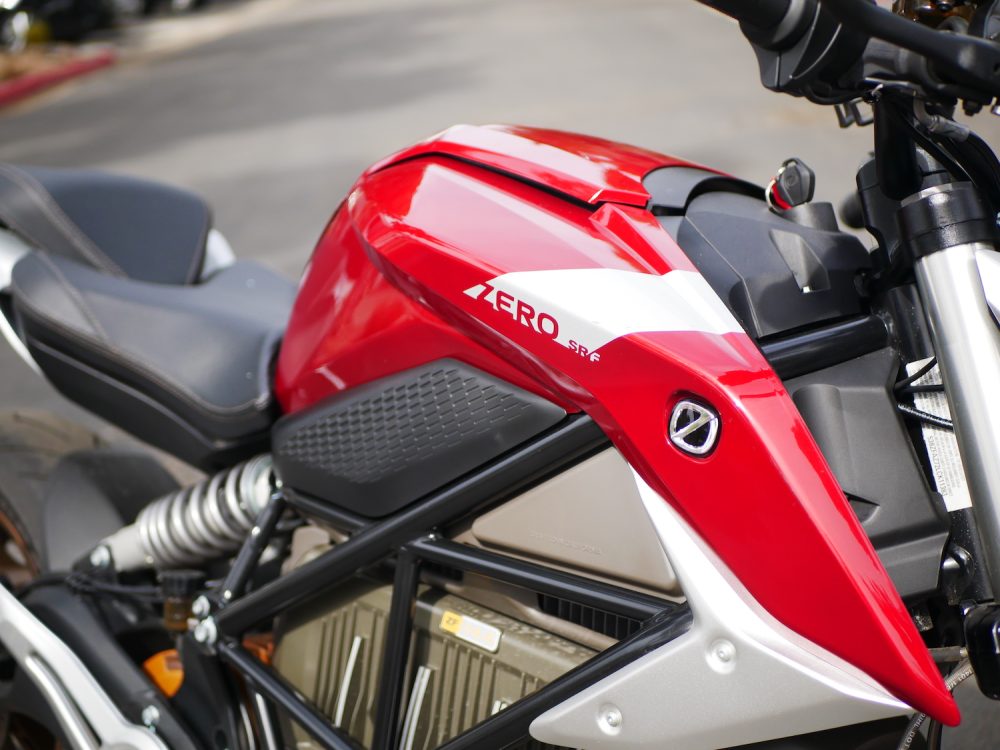 The Premium version of the Zero SR/F also has a few other upgrades like heated bars, but despite doing my testing in February, I was riding around Los Angeles and didn’t really need heated bars. 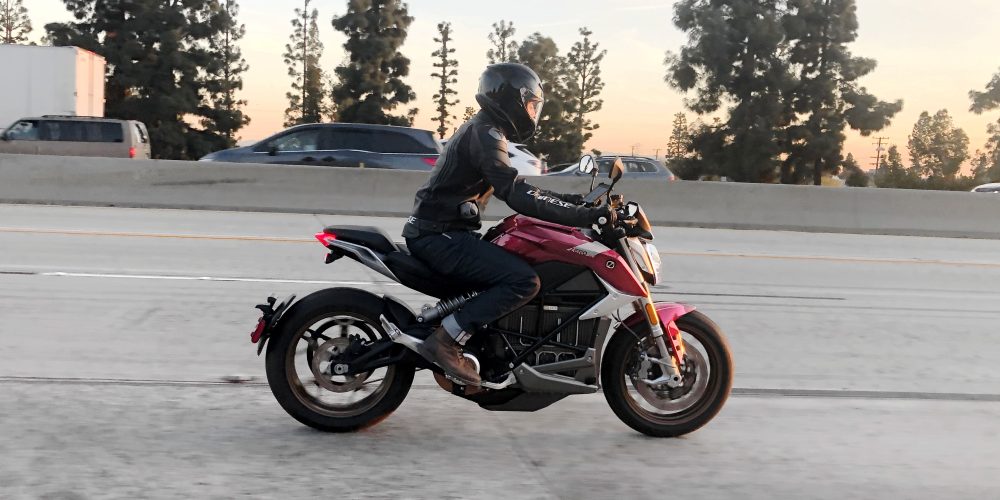 A ride as aggressive as it looks

The best word I can think of to describe the SR/F’s ride style is “aggressive.” And I mean that in a good way. It’s sportier feeling than the rest of the Zero lineup and tucks you up into an aggressive stance with high foot pegs. To be honest, I felt a little more tucked than I would have liked, but I’m more of a roadster kind of guy anyways, so sport bike lovers will certainly take a liking to the Zero SR/F’s geometry. At high speeds I felt perfectly positioned to lean down over the “tank” (actually a glove box with plenty of storage space for a long charging cable — or whatever else you want to keep in there).

The sporty stance also makes it feel quite comfortable during launches, which will rip you toward 60mph (97 km/h) in a hair over three seconds when you put it in SPORT mode. You also get ECO, STREET and RAIN modes, as well as custom profiles. I mostly kept the bike in STREET mode as I liked the extra regenerative braking when I rolled off the throttle. Speaking of launching, keep in mind that this is an electric motorcycle, which means you can get near perfect, repeatable launches again and again. There’s no timing the shift or matching revs, there’s just twist and go. 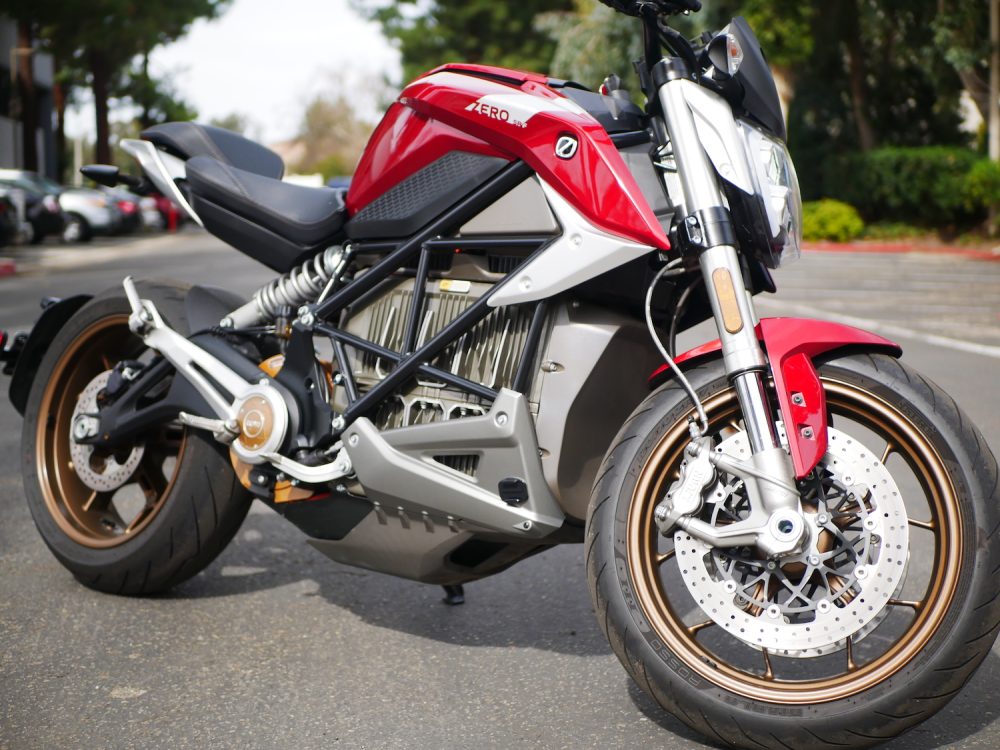 With a top speed of 124 mph (200 km/h), no one can complain that there isn’t a high enough top end. I didn’t test it all the way to 124 mph, but I got a lot closer than I had originally planned. That 82kW motor pulls and pulls, happily giving you more horses anytime you want them. As I approached and then passed triple digits, the ride felt as smooth as it did at slow speeds in the city. The bike wasn’t screaming underneath me but rather egging me on for more, like it was meant to do it.

This is the same motorcycle (albeit with a few modifications) that tackled the 2019 Pike’s Peak Hill Climb Challenge with an impressive showing.

The SR/F was built as a performance-oriented motorcycle and you can feel it. The bike just wants more and more.

That doesn’t mean it won’t make a good commuter. Like all electric motorcycles, the Zero SR/F is a great commuter option because it is so easy to ride. But I’m excited to test the Zero SR/S soon and compare it on the commuter aspect, as the SR/S is designed with a slightly more comfortable geometry that I think will shine in commuting.

This certainly isn’t Zero’s longest-range e-bike. That’s still the Zero SR, which offers around 10% better range. But the SR also has a lower power motor. The SR/F makes no excuses for its raw power, even if that costs the bike a bit of range.

From my experience, I found mixed riding to eat away the battery at around 1% per mile, giving me an effective range of around 100 miles or 160 km. That included everything from cruising city streets to 80+ mph highway riding. With an all-city range of 161 miles, the bike can of course go further when you keep the speed down. That’s also true on the highway, where I could see a considerable difference in consumption between 60 mph and 80 mph riding, though that’s true of any bike. The problem is that you need some serious self control to keep the Zero SR/F down to just 60 mph — it begs for more.

To put the range in more realistic terms that Southern Californians might appreciate, I did a 50-mile trip from Hollywood down to Newport Beach to visit the Electric Bike Company, and used almost exactly 50% of my battery. Between the 705 and the Pacific Coast Highway I was riding fairly fast. And while I charged at my destination just to be safe, I theoretically could have done the entire round trip on a single charge.

Speaking of charging, I did that charge during a lunch stop using a Level 2 charger and was pleased to see that I returned to a 100% full battery. While DC fast charging is great (and I’d love to see Zero adopt it), the smaller batteries on electric motorcycles compared to electric cars mean that Level 2 chargers are almost like DC fast charging for electric cars, at least in terms of charge time. With dual 6kW on-board chargers, the SR/F Premium can Level 2 charge to 95% in around one hour, though mine had a single 6kW charger and took closer to two hours for a nearly full charge. While an hour is a long time to wait while tapping your foot on the side of the road, it’s a nice lunch break or a chance to walk around at an interesting stopover point. And realistically speaking, no one charges to 100% while road-tripping anyways. You charge to perhaps 80% or 90% to make use of the faster portion of the charging curve, then continue on your way. That means half hour charge stops can get you most of the way to a “full tank,” assuming you don’t roll in on empty.

Is it as good as DC fast charging? No, it’s not. DC fast charging will still dump more power into the bike quicker and get you back on the road in less time. That’s important for touring or when you don’t really want to hang out at a charge stop. Sometimes all you want is to fill up and get back on the road. But in the meantime, I was quite happy with Level 2 charging when necessary, and even Level 1 charging (8 hours overnight) for my normal daily riding. 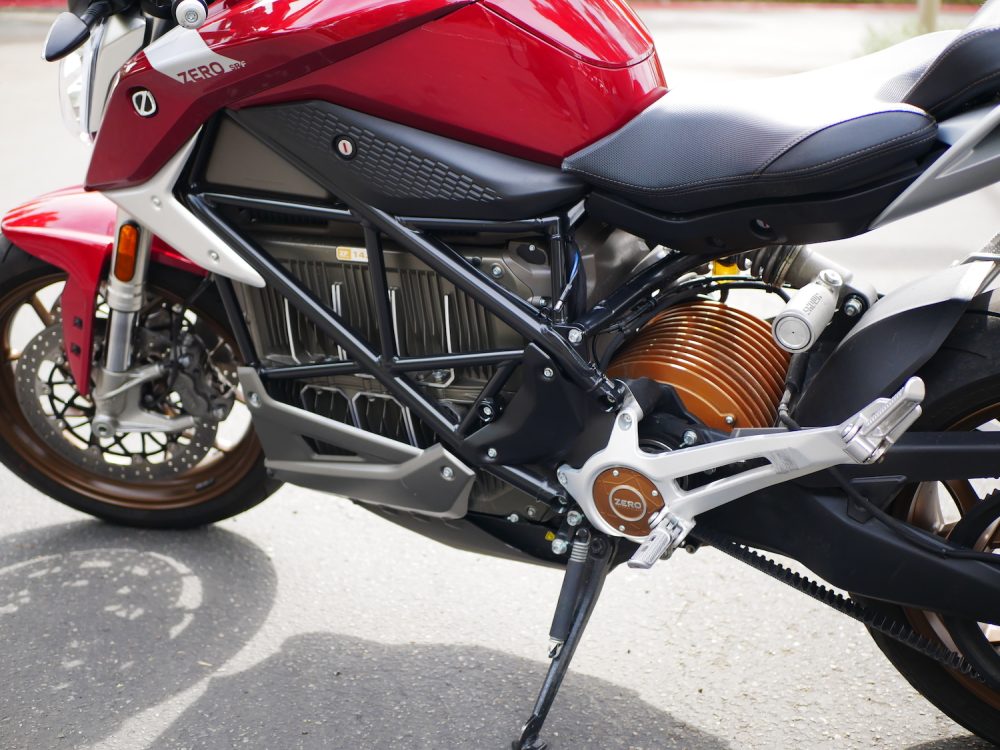 Who is the SR/F for?

To me, the SR/F feels like the perfect sporty ride for someone who primarily wants a functional, utilitarian bike but wants to be able to rip as much performance out of it as possible.

The SR/F can do everything that Zero bikes are so prized for — they make great bikes for riders who want a bit of everything. Zero’s bikes are meant to make a great Sunday morning adventure ride and then a great Monday-morning commute. But the SR/F simply cranks up the energy compared to the rest of Zero’s lineup. And as someone who was happy with Zero’s smallest and lowest power bike, the Zero FXS, I was blown away by not just the power of the SR/F, but also the smoothness of the ride. When I wanted a thrilling launch, I could get aggressive. When I wanted a smooth experience, a soft wrist gave me that, too.

So the SR/F feels like the right electric motorcycle for riders who want power on a whole other level, but in a package that can handle daily life as well. It ain’t cheap, but we’re still in the early days of electric motorcycles, believe it or not. For now, you’ve got to pay to play. But at least it looks downright affordable when compared to a $30k LiveWire!

What do you think of the Zero SR/F? Let me know in the comments below!