The Lightning Strike electric motorcycle, which was teased for months, was just unveiled minutes ago.

The bike features an impressive array of specs and a low entry price of just $12,998.

The Lightning Strike isn’t quite as fast as its big brother, but still ties Energica for the second fastest commercially available production electric motorcycle at 241 km/h (150 mph).

All three use the same liquid-cooled motor, but offer different levels of power, speed and battery capacity. 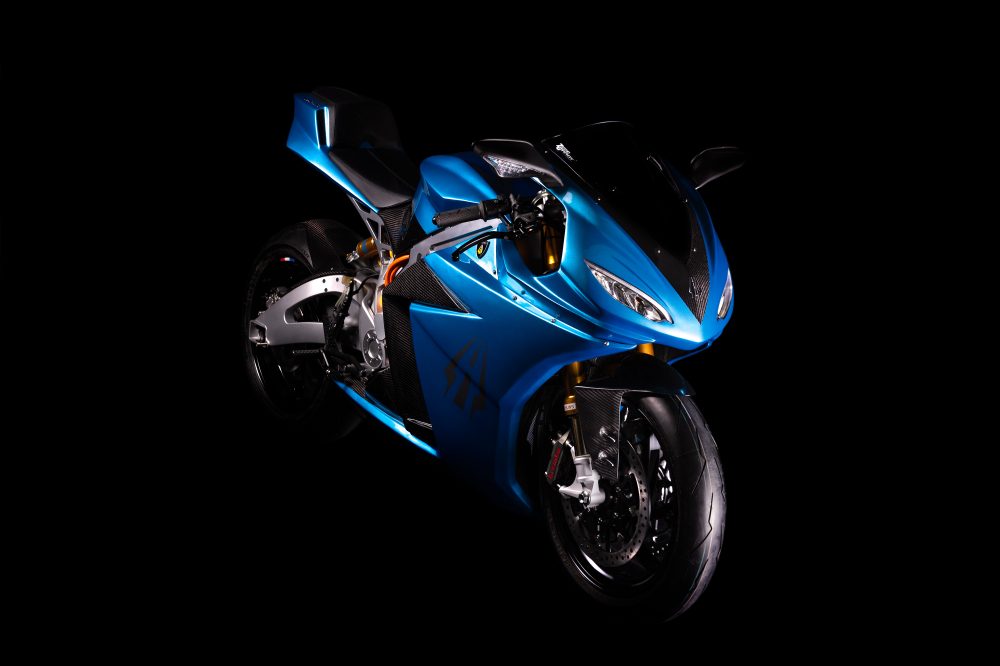 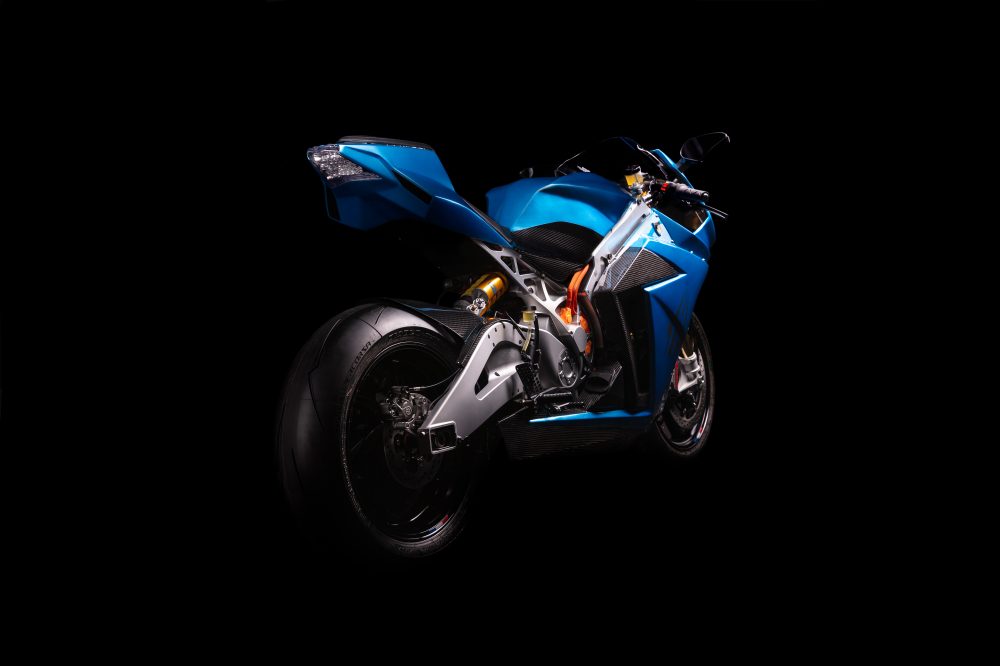 It is nearly identical to the Strike Standard, except with a larger 15 kWh battery.

That larger battery bumps the range up to 169-241 km (105-150 mi) of range (highway/city). The charging time will also be a bit longer due to the larger battery. Adding the 6.6 kW charger option can bring that charge time down below 3 hours again though. 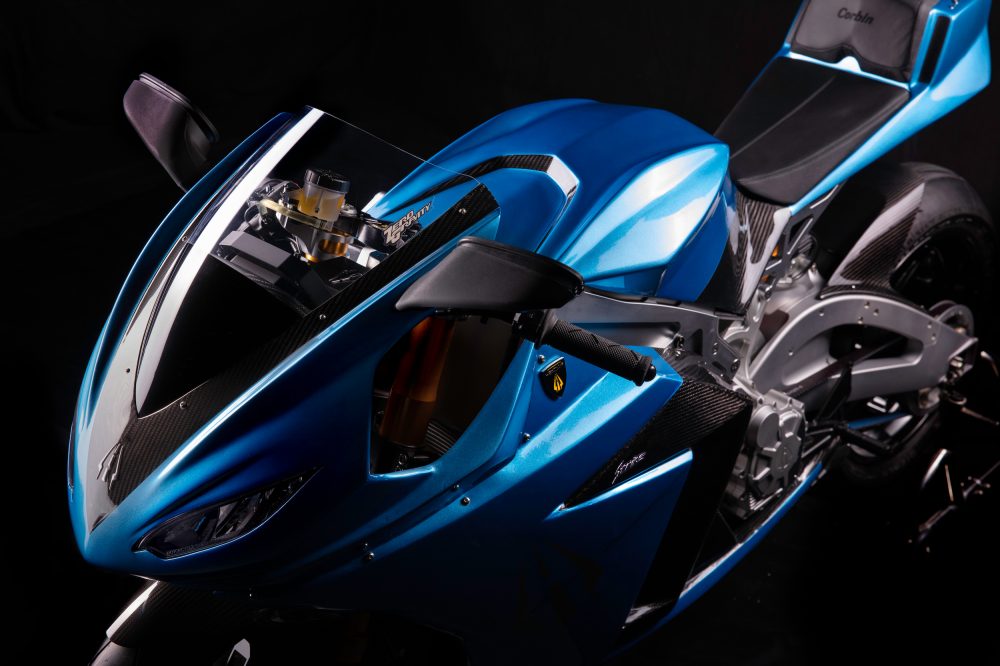 For the extra cost, riders get more power, speed and range, as well as faster charging, higher end braking/suspension components and a carbon fiber body package.

The motor on the Strike Carbon Edition is boosted to 90 kW (120 hp) and the battery is upgraded to 20 kWh.

The 6.6 kW charger option comes standard on the Strike Carbon Edition, as does native support for Level 3 DC fast charging. Level 2 charging should recharge that massive 20 kWh battery in just over 3 hours. DC fast charging will do the trick in as little as 35 minutes or provide 160 km (100 mi) of range in just 20 minutes. 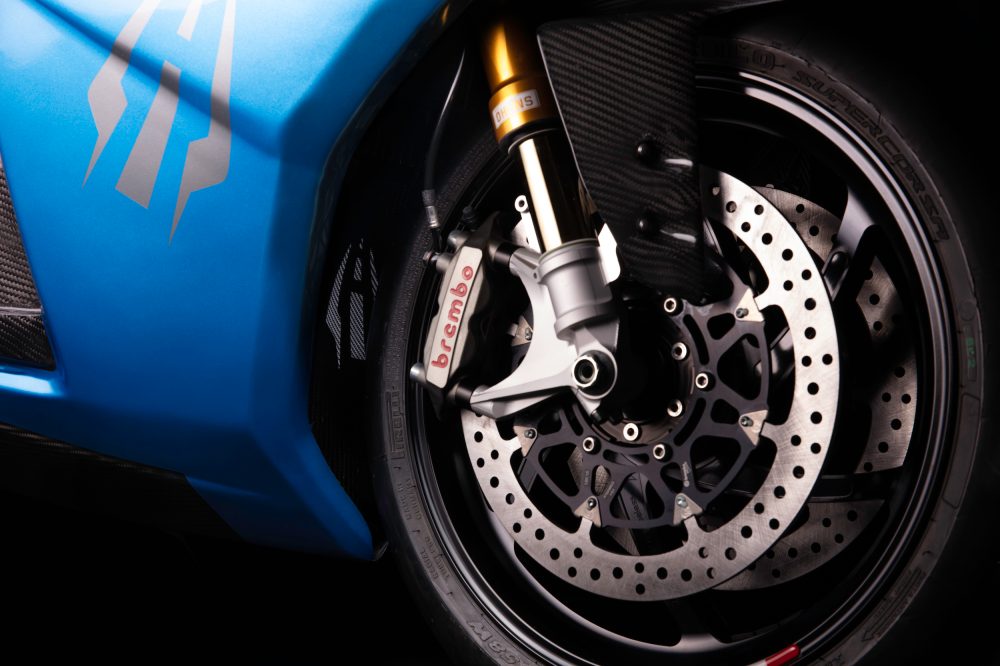 The Lightning Strike Carbon Edition is outfitted with every possible upgrade option, including Öhlins suspension, Brembo Monoblock brakes, AIM Strada racing dash with lap timer and GPS-based data logging, plus a carbon fiber body package. There’s no need for customers to configure their Strike Carbon Edition — it comes with all boxes checked.

The Strike Carbon Edition will be the first version of the Strike produced, with deliveries beginning in July.

Lightning has pitched the Strike as an electric sportbike that was engineered for the track but designed for the street. According to the company:

“Strike’s design is intended to blend elements of track-ready performance, daily rideability and comfort, as well as aerodynamic efficiency to extend range at higher speeds. With a beautifully dynamic sportbike esthetic, Strike shares clear design DNA with the LS-218 halo bike in a slightly more compact package. Ergonomic focus on rider triangle geometry positions the seat, handlebars and footpegs to make Strike feel like a natural extension of the rider.”

The body was designed with extensive wind tunnel testing, which Lightning claims makes it the most aerodynamically efficient electric motorcycle on the market today. They say it has a 30% reduction in aerodynamic drag at 112 km/h (70 mph) compared to “other non-faired electric motorcycles”. 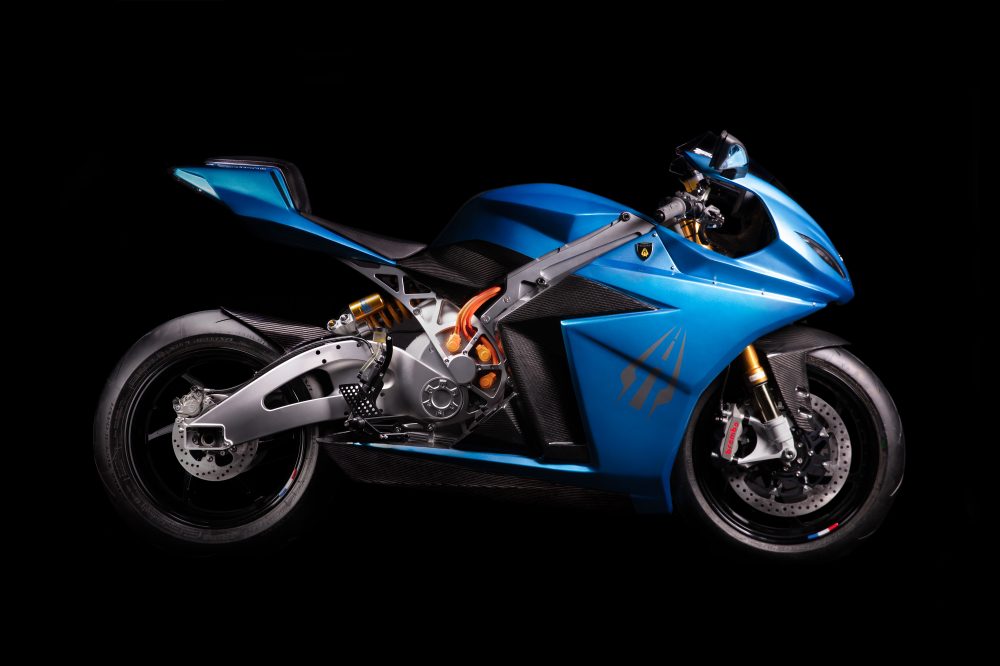 The company will perform much of the component production at a facility in China. Many of the parts will be produced in a 20,000 sq ft (1,860 sq m) facility in Quzhou, south of Shanghai. They’ll then be assembled in California at Lightning’s own San Jose facility, which is similar in size to their Quzhou factory.

The carbon fiber bodywork found in the Strike Carbon Edition will all be done in-house at Lightning’s California facility.

And for all of you non-Americans out there, Lightning will announce plans for international expansion later this year. So it’s likely coming, just hang in there!

I’m quite impressed, though I’m not knocked off my feet as I had secretly hoped to be. I’d call the Strike a major step forward in the electric motorcycle industry, but not the paradigm shift that some had anticipated.

Even so, the base model’s specs are still great for the price. Let’s compare it to some offerings from Zero Motorcycles.

The Zero S ZF7.2 is the entry level model of the S line, which would make it comparable to the Lightning Strike Standard entry level model, but the ZF14.4 has a larger battery closer to the Strike range. Let’s look at both.

The entry level street bike for both companies are nearly identically priced (again, assuming the Zero Charge Tank is added).

What we see is that for the entry level models, the Lighting Strike Standard offers approximately one third more speed, double the power, more than double the torque and between 10-50% more range.

Compared to the higher spec’d Zero S ZF14.4, the Lightning Strike still blows it away on speed, power and torque, though obviously can’t match the nearly 50% more battery of the ZF 14.4. At that point though, you could compare the $16,998 Strike Mid Range with 15 kWh battery to the $16,290 ZF14.4 with Charge Tank. Now they’ve got approximately equal battery capacity and range (depending how its measured), yet the Strike Mid Range still blows away the Zero S ZF14.4 on speed, power and torque.

The big differentiator really comes down to charging time. You can shave off $2,290 from those two Zero prices if you only need slow overnight charging on a standard 110V outlet. One of the big differences with the Strike is that it supports Level 2 charging natively, no accessory chargers required. And the $19,998 Strike Carbon edition even offers that 35 minute DC fast charging as standard, though now you’re getting into Zero SR/F pricing territory ($20,995).

When comparing the Strike Carbon Edition to the Zero SR/F, the Strike saves you $1,000 while still offering a 26 mph speed advantage (150 mph vs 124 mph) and slightly edging out the Zero SR/F on power, torque and range. It also blows away the SR/F on range, offering nearly 50% more range. And the Strike has arguably better components, including the Brembo brakes and Öhlins suspension.

Energica’s line of racing electric motorcycles also make an interesting comparison. Even just the entry level Strike Standard is competitive with a $21,000 Energica Eva. The Energica packs nearly 50% more power, but the Strike Standard is actually faster by 10 mph (16 km/h) and has approximately the same range. For $8,000 less! So if you’re spending more time on the highway than the race track, the Strike Standard is probably the better bike and much more affordable.

The weight of the Lightning Strike is throwing me for a bit of a loop though. Where’s that extra weight coming from, compared to the Zero? I imagine the motor is heavier, as is the liquid cooling system. But the weight increase from model to model is also strange. Moving from Strike Standard to Strike Mid Range adds 5 kWh but only 10 lbs (4.4 kg)? That’s either the world’s lightest 5 kWh battery or the Mid Range shaved off some pounds somewhere else. Or it’s a reporting error on Lightning’s part.

Anyway you slice it though, the Lightning Strike is an impressive bike with impressive specs. The entry-level price for the Strike Standard offers high performance at a more affordable price than was previously available on the market. While I would have loved to see a 150 mph and 150 mile bike for $13k, I still think the Strike Standard is more than fair.