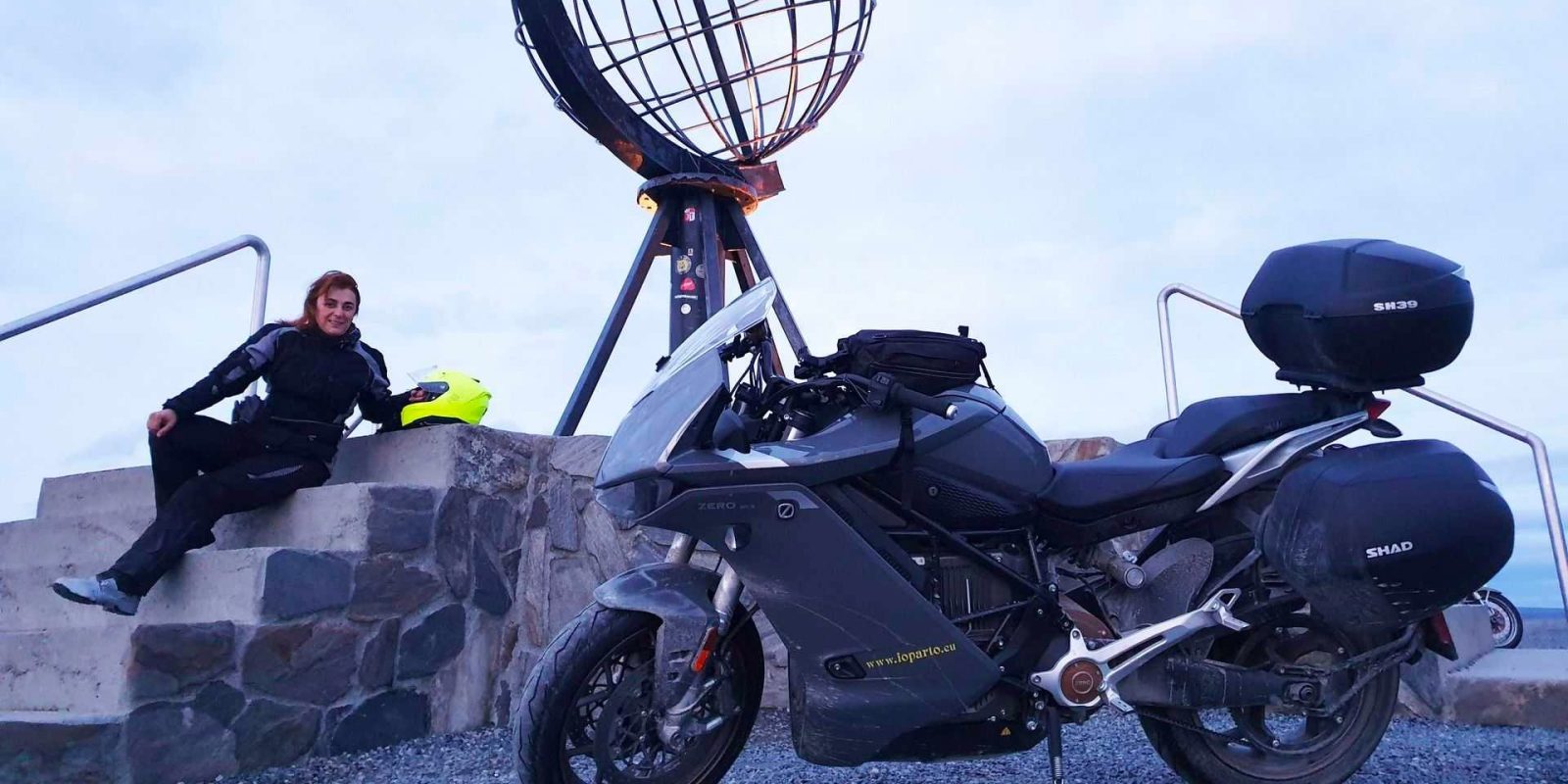 While electric motorcycles have demonstrated their advantages over typical gas-powered motorcycles in a broad sweep of areas including power, torque, rideability, and maintenance, their range and recharge times have long been their Achilles’ heel, especially when it comes to motorcycle touring and cross-country trips.

Recently we’ve covered a number of long-distance electric motorcycle rides, including Diego Cardenas’ trip from the US-Mexico to US-Canada border as well as Felix Stellmaszek’s spontaneous cross-country trip. Both of those were completed on Harley-Davidson LiveWire electric motorcycles.

An electric Iron Butt (1,000 miles or 1,600 km in 24 hours) on an Energica EsseEsse9 electric motorcycle also made the list.

And of course there is Ewan McGregor’s and Charlie Boorman’s 13,000-mile (21,000 km) trip from Argentina to Los Angeles on LiveWire electric motorcycles.

But Miriam Orlandi’s 4,350-mile (7,000 km) journey is a first in a number of ways: She’s the first to do such a long-range trip on the new fully fared Zero SR/S electric sportbike, she’s the first to ride an electric motorcycle to the northernmost tip of Europe, and she boosts the underrepresented female presence in long-distance e-moto riding.

In just 21 days, Miriam rode from Brescia, Italy, to North Cape, Norway. That 4,350-mile (7,000 km) journey took her deep into the Arctic circle to arguably the northernmost point in Europe.

Technically there are European islands and archipelagos such as Svalbard that are further north, but since they can’t be reached by an electric motorcycle on land, we’re going to give this one to Miriam.

Miriam’s journey averaged around 207 miles (333 km) per day. And since the Zero SR/S doesn’t offer DC fast charging, she charged with a combination of Level 2 charging (around two hours to a nearly full charge on an upgraded Zero SR/S) or Level 1 charging (overnight on a standard home wall outlet).

When I tested the similar spec’d Zero SR/F electric motorcycle, I found I was achieving an average range of around 1 mile per battery percent, or around 100 miles (160 km) per full charge.

Assuming Miriam had a similar experience, that means she likely performed between 1-2 charges each day, plus an overnight charge.

The goal of her journey was to help demonstrate how these types of trips could be performed more sustainably.

In fact, Miriam said that one of the most enjoyable aspects of her journey was being able to enjoy the nature she was riding through without disturbing it.

Along the way, Miriam found that she was welcomed in by strangers, often staying the night and charging her bike as well. That’s an experience that Ewan McGregor reported on his Long Way Up motorcycle tour as well, where he and Charlie Boorman often relied on the kindness of strangers for a night’s rest and a charged battery.

As charging networks continue to expand and electric motorcycle ranges continue to increase, long-distance riding is becoming easier and more accessible than ever.

Many have cited half-hour DC fast charging as a prerequisite for such journeys, but Miriam’s trip demonstrates that even a Level 2 charging electric motorcycle can perform long-distance rides. At a certain point it comes down not just to the motorcycle, but to the rider as well.