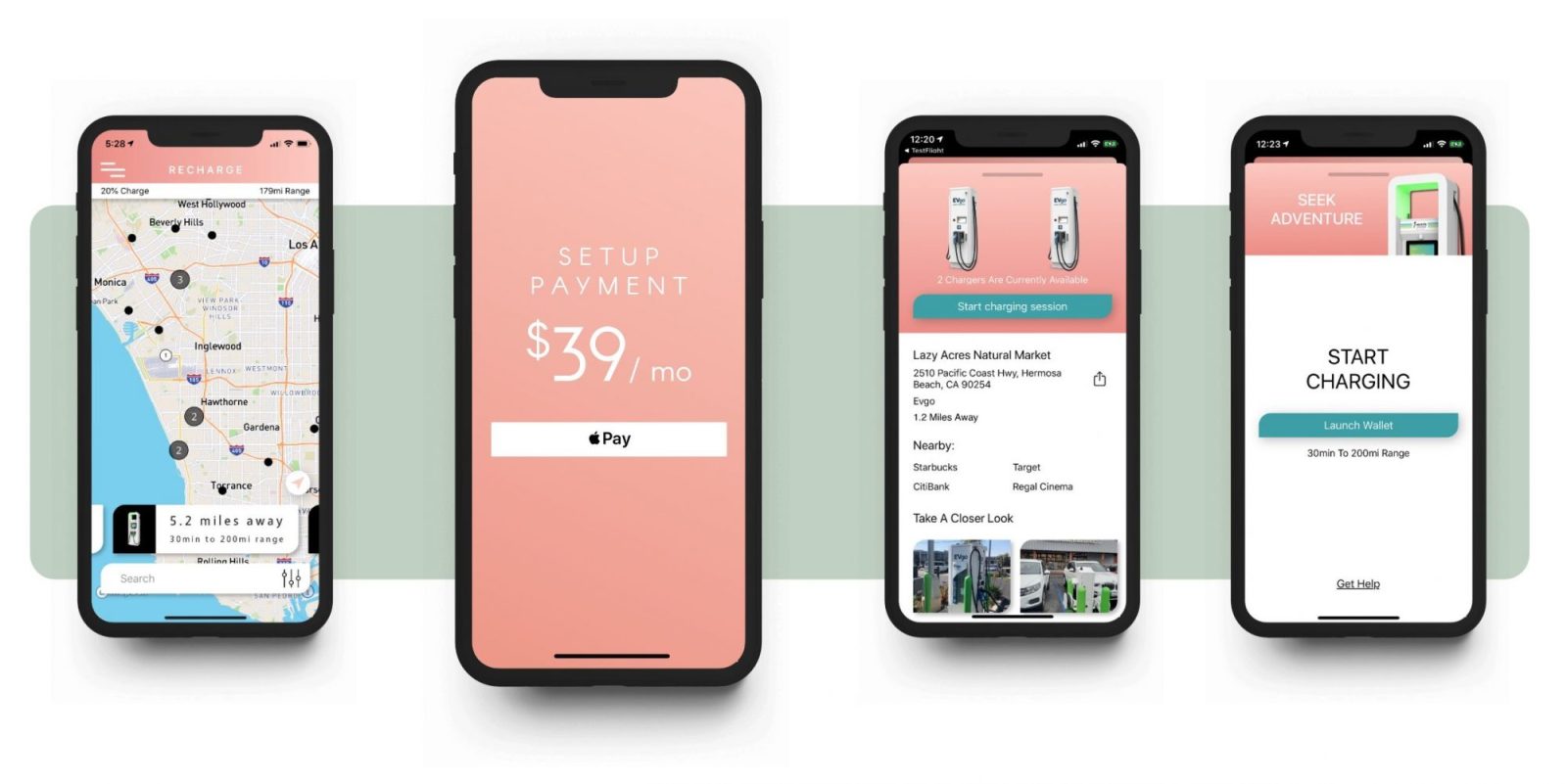 EVPassport is an upcoming app that promises $39/mo unlimited charging on major EV charge networks. The included networks are Electrify America, EVgo, Chargepoint, Hubject and Greenlots, along with some smaller regional networks on the US West Coast. The app plans to launch in “a few weeks” but is taking wait list signups now.

The app will start with support for iPhone and DC fast charging in the US at first, with initial support for 2,500 DC chargers. It will expand to Android later this year, along with European support (including IONITY). If all goes well, it plans to add Level 2 AC charging support next year.

EVPassport is a collaboration between Recharge, a relatively new angel-backed startup, and Smartcar, a connected car API company. Recharge has advisory support from several auto industry veterans including a Ferrari executive and a Tesla autopilot engineer.

Recharge says that their goal with the app is to simplify charging interactions for EV drivers in several ways.

Initially the system will focus on a subscription model with a flat monthly fee for all users, paid for by in-app purchases. The charge will be month-to-month, so you are essentially pre-paying for the next month of electricity, and can cancel any time. It’s possible they may consider a pay-per-use model in the future, but for now, they think that a subscription fee will be simpler for the end user.

Also, rather than listing cost or kilowatt speed of charging, EVPassport will quote charging speeds in “minutes to charge.” When searching for chargers in the app, you’ll be able to see how long it will take to get back on the road without having to do your own calculations.

By putting everything into one app, users will be able to see real-time availability of charging stations across multiple networks without having to switch apps, which simplifies the process of finding an open charger, especially on busy travel weekends.

Finally, Recharge says they will be purchasing carbon offsets for all charging done through their app.

While Recharge itself is not working in direct collaboration with any of the listed charging network companies in the US (they are working directly with Hubject in Europe), they have been working on ensuring compatibility with these charging networks via site surveys. So far, EVPassport claims compatibility with all EA stations, most EVgo stations, about half of Chargepoint stations (in particular, not the ones at dealerships), and all “new” Greenlots chargers.

This has only been possible due to a recent opening of charging payment standards in the US, where some states (notably California) have mandated more open access to charging.

Notably, Tesla Supercharger stations are not included. Tesla drivers could still sign up for EVPassport to use other DC charge stations with Tesla’s CHAdeMO adapter, or level 2 stations in the future (though this is unlikely to offer a better user experience than Superchargers do, but might present cost advantages for a few individuals).

EVPassport plans to support every EV with DC quick charge capability. To use some features, such as the “minutes to charge” feature, the car will have to have some sort of internet connection which EVPassport can access. Most recent EVs have this, but a list of compatible cars will be available soon.

The company had been planning a public launch a few months ago, but pushed things back due to COVID travel concerns. Now, the plan is to launch in a few weeks — and this timeline will partially be affected by how comfortable the company feels with encouraging travel during the current pandemic.

You can sign up to get on the waitlist at EVpassport.com and hear more about the app when it’s ready to launch.

EV drivers have been waiting for a long time for something like this. There are a lot of charge networks out there, and it’s annoying and confusing for new owners and existing owners alike to maintain separate accounts for each of them.  A unified charging standard has been overdue for a long time. This new app promises an end to that wait.

The pricing, also, seems reasonable. On the one hand, it’s more than most people will spend on fast charging, so it gives EVpassport a chance to make money in exchange for convenience – assuming enough people continue their subscription on months they don’t use the system very much. On the other hand, it’s not really all that expensive, particularly when compared to energy costs for a gas car.

But there is an element of “too good to be true” here. While this sounds like a great idea, we haven’t seen it in practice yet. There are still some open questions as to whether this can roll out effectively and actually follow through on the promises above.

We’ve heard a lot of “ease-of-use” promises that haven’t quite worked out in the past, from bigger, better-known, and better-funded organizations. And then there’s the question of whether the company can make it work, profit-wise, in the long term.

So while this looks like a great idea, there’s always the chance that it doesn’t work out as well as we’d like. We hope it does, but we’re going to have to take a “wait-and-see” approach before thinking that we’ve finally found a solution to every public charging problem.