The first 500 units of the all-electric Aiways U5 SUV are on their way to Europe. Their arrival will mark the first batch of Made-in-China EVs to be put on European roads, paving the way for a new level of affordability for long-range electric vehicles.

The market introduction of the U5 EV was planned for April 2020. But it was delayed until August due to the global pandemic. The U5 SUV will be made available as a leased vehicle at first, and then for purchase or in a subscription. The U5 will be available in Germany, Norway, Switzerland, The Netherlands, and most likely France. Pre-orders opened in April.

The Aiways factory in Shangrao, China, has an annual capacity of 150,000 vehicles. The first batch of 500 battery-powered U5s, which arrive in July, will be put into service by Hertz Corsica as rental vehicles on the Mediterranean island.

At a virtual press conference held in March in place of the canceled Geneva Motor Show, Alexander Klose, vice-president of overseas operations, said:

With the launch of the U5, we will become the first Chinese EV brand to bring an electric vehicle to Europe. This is a very important moment for Aiways and the Chinese car industry as a whole. We will show that EVs from China can compete with the best in the world.

Using a modest 63 kilowatt-hour, liquid-cooled battery pack, the U5 is rated for 250 miles of range in the WLTP cycle. A single 140 kW (187-horsepower) motor powering the front wheels will mean modest acceleration but likely good efficiency. We guess the real-world range will fall below 200 miles. Earlier reports indicated that multiple battery pack sizes would be available. 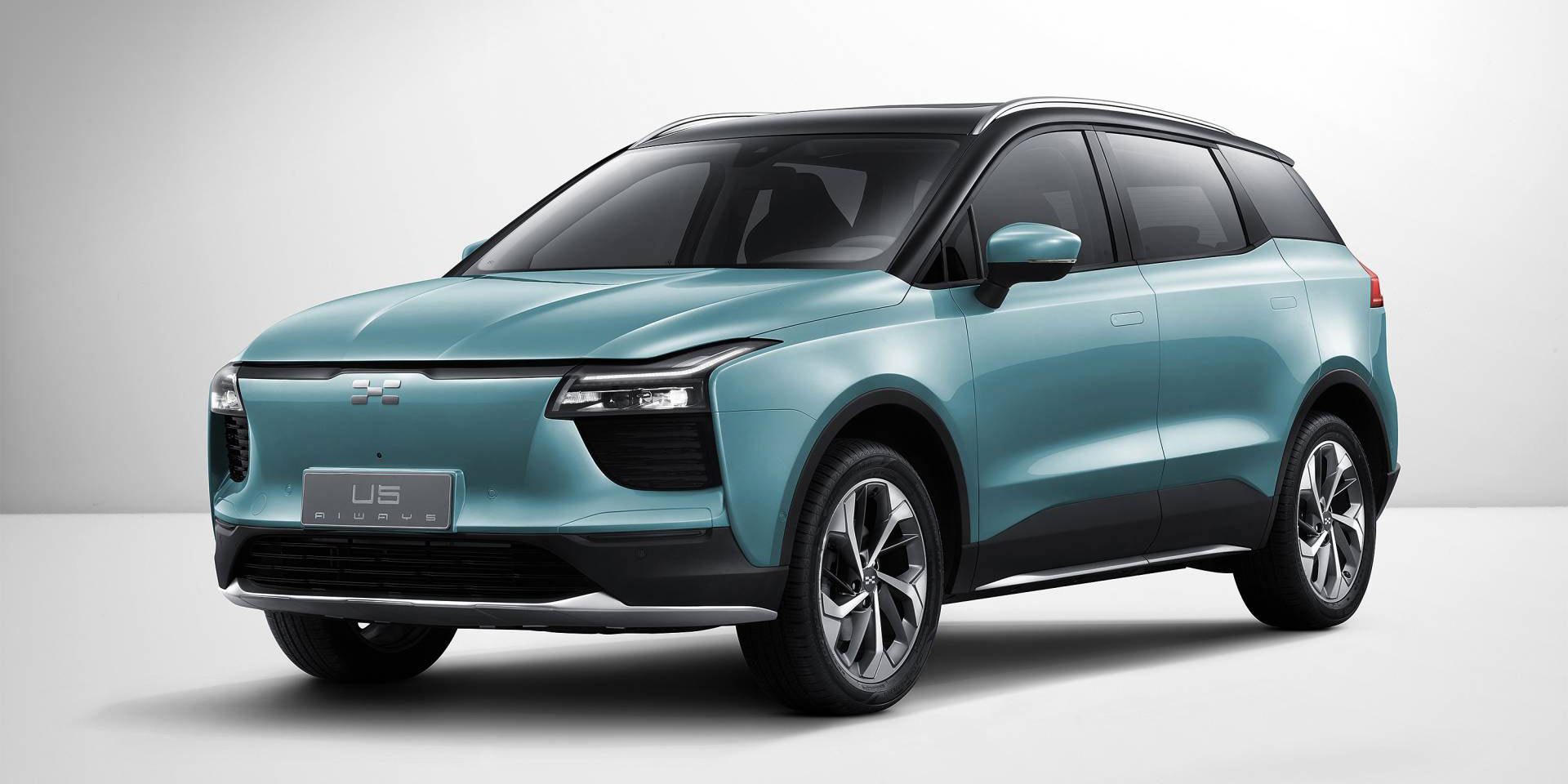 Chinese media reports indicate a starting price of the U5 at the equivalent of about $28,000 – that is, in domestic markets after incentives. Klose did not yet disclose the lease pricing for the U5 in Europe but pegged the “value” of a fully-loaded top-spec version of the U5 EV at €40,000 ($45,300) before incentives.

That top-spec U5 will be well-equipped. It’s expected to provide semi-autonomous driving, a 12.3-inch touchscreen infotainment system, automatic climate control, a sunroof, and a foot-controlled tailgate.

Battery cells come from CATL. Bosch supplies key electric components. A Mobileye EyeQ4 camera (along with a set of radar and ultrasonic sensors) power a Level 2 driver-assist system. The spec for quick-charging is not known, although the company is promising to charge from 30% to 80% in less than 30 minutes.

A crossover about the size of Model Y

Aiways styling is hard to place, a somewhat generic mashup of elements similar to a Mitsubishi and Toyota. The tape measure for the U5 reads: 184.3 inches long, 73.6 inches wide, and 66.9 inches tall. Fold down the rear seats to get 55 cubic feet of cargo space.

Compared to a Tesla Model Y, the Aiways U5 SUV is two inches shorter, nearly three inches taller, and almost identical in width. In other words, its dimensions match the specs of the current wave of electric crossovers, like the Ford Mustang Mach-E and Audi Q4 e-tron.

Aiways will use a direct-to-consumer sales strategy with a partnership network providing local service and repairs. The company claims zero maintenance is required until 100,000 kilometers. 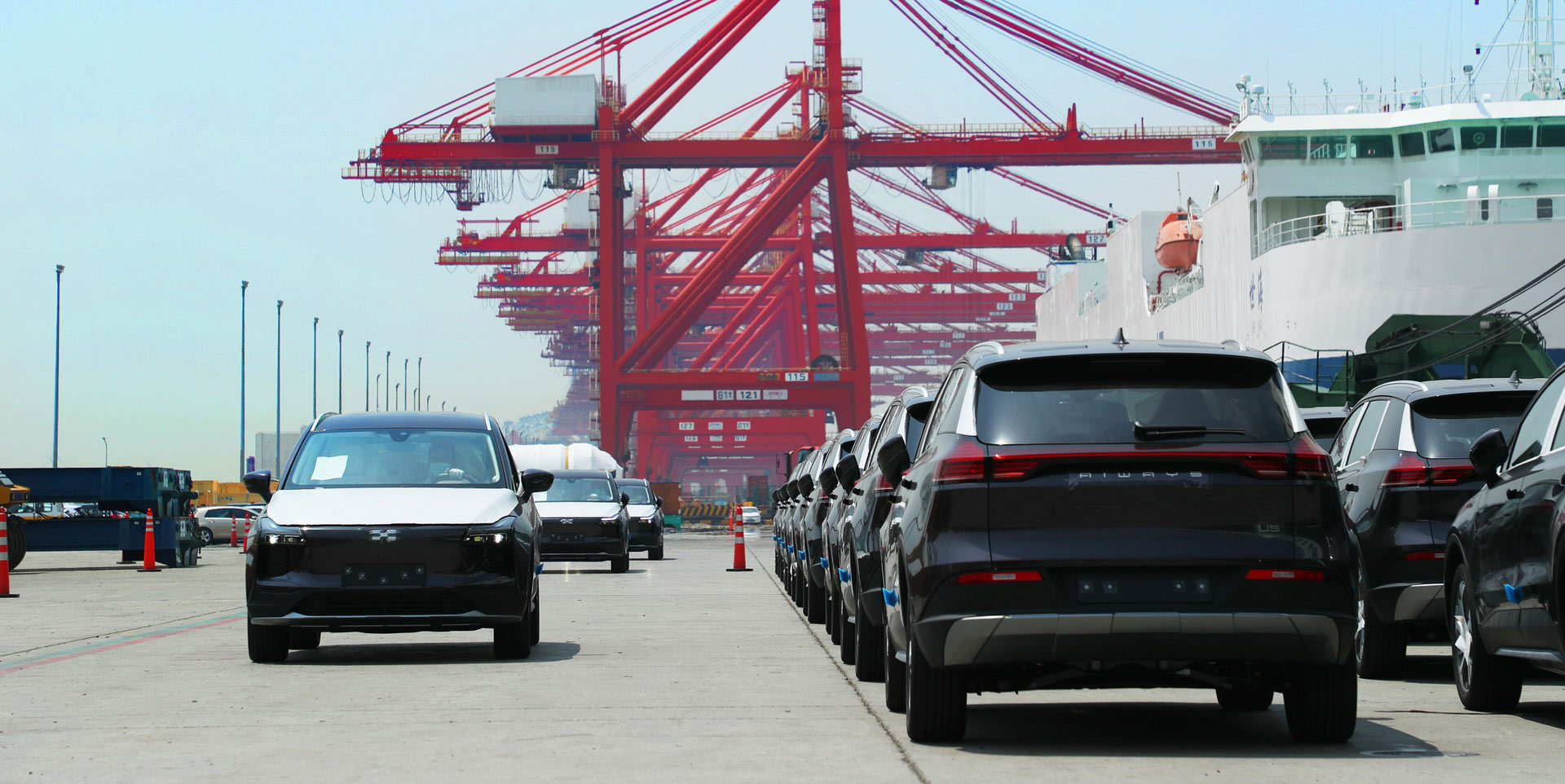 In September 2019, Aiways became the first Chinese EV-maker to obtain approval from the German TÜV Rheinland agency — thereby certifying its U5 EV for sale in Europe. For the TÜV presentation ceremony, two U5s were driven more than 9,000 miles from China across Russia, through the Baltic states and Scandinavia, before reaching Frankfurt.

Critical details about the Aiways U5, such as the price of a base model, are still unknown. Build quality and reliability are obvious questions. And a batch of 500 EVs is not a lot.

But the arrival of a Chinese EV in Europe is an important milestone. It won’t be long before other Made-in-China electric vehicles arrive in Europe and the United States. Of course, we know about Byton and Nio, as well as Geely-owned Volvo and Polestar.

However, the ability for countless other lesser-known Chinese EV makers to produce electric cars at a much larger scale and with a laser-focus on lowering the purchase price is a potential game-changer. In previous generations, American and European automakers scoffed at the quality of Japanese and Korean cars, only to become highly competitive international players.

The immense scale of electric-vehicle production in China is unique. Leveraging its capacity to make EVs, much like it produces many other electronic consumer products, could help reduce electric-car prices. It won’t happen immediately, but the arrival of the first shipment from China to Europe is another step in that direction.

World’s largest electric cargo plane unveiled, here’s how far it can fly on its own