Earlier this year we reported that Suzuki was finally in the process of bringing an electric two-wheeler to market. We pined the fact that it was intended to be a seated electric scooter instead of a full electric motorcycle, but were withholding judgment until we could see the final Suzuki electric scooter.

While we don’t yet have a look at the production prototype, we’ve got the next best thing: Patent image leaks that give us insight into the design.

As you can see in the image below, the scooter uses a conventional frame not all that uncommon in both gas and electric scooters. Square tubing and structural gussets all indicate a no-frills design likely inspired by the company’s existing line of gas scooters.

Suspension consists of a standard telescopic fork and a rear swingarm with dual shocks. The batteries appear to be mounted in a box under the seat. That is also the traditional storage area on a scooter, and it is too soon to say how much space will be left for storage once the batteries are installed.

The placement of the batteries could also indicate removable packs for charging off of the Suzuki electric scooter. Non-removable batteries are often mounted lower in the scooter, taking advantage of space under the floorboard and lowering the center of gravity of the scooter.

The patent images show that the motor will be a central-driving unit, not a rear hub motor like is found in many electric scooters. Belt or chain drive could be selected for the final drive transmission – neither is quite visible yet, though a chain or belt guard can be seen on the left side of the swingarm. 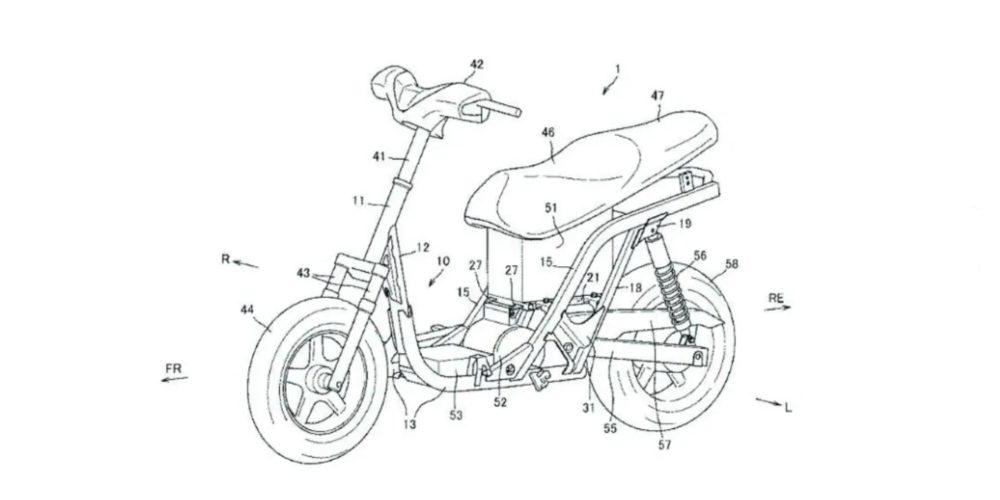 The motor speed controller appears to be mounted under the floorboard of the Suzuki electric scooter, an area where it may be able to take advantage of ducted cooling air.

The scooter sports a seat for two riders. Mounting points for body panels are visible on the frame, though the images don’t include the actual body panels. Thus, we don’t yet have a clear picture of the scooter’s styling. For that, we’ll need to wait until Suzuki is ready to spill the beans.

The scooter is scheduled to debut in the Indian market first, where it will be produced locally. Original estimates indicated a 2020 launch, though there is no word yet on whether the COVID19 pandemic will delay that timeline.

As much as I was hoping to see Suzuki finally roll out an electric motorcycle, I can put up with a scooter if it means the company is making progress.

I don’t see anything in this design that jumps out as particularly eyebrow-raising, but perhaps that’s ok too. Suzuki will be entering a crowded market in India, and there are already plenty of wild designs from Indian companies like Blacksmith as well as traditional Vespa-clones from other Indians companies such as Bajaj. The Bajaj Chetak, pictured in the lead image of this article, is likely to be of particular competition to Suzuki. So perhaps Suzuki is hoping to come in with a simple, tried-and-true design that doesn’t take risks and instead just offers a no-frills electric scooter option for the common man.

If it sells well then that could be the motivation that Suzuki executives need to finally push forward with a full-size electric motorcycle.

What do you think? Let me know in the comments below.