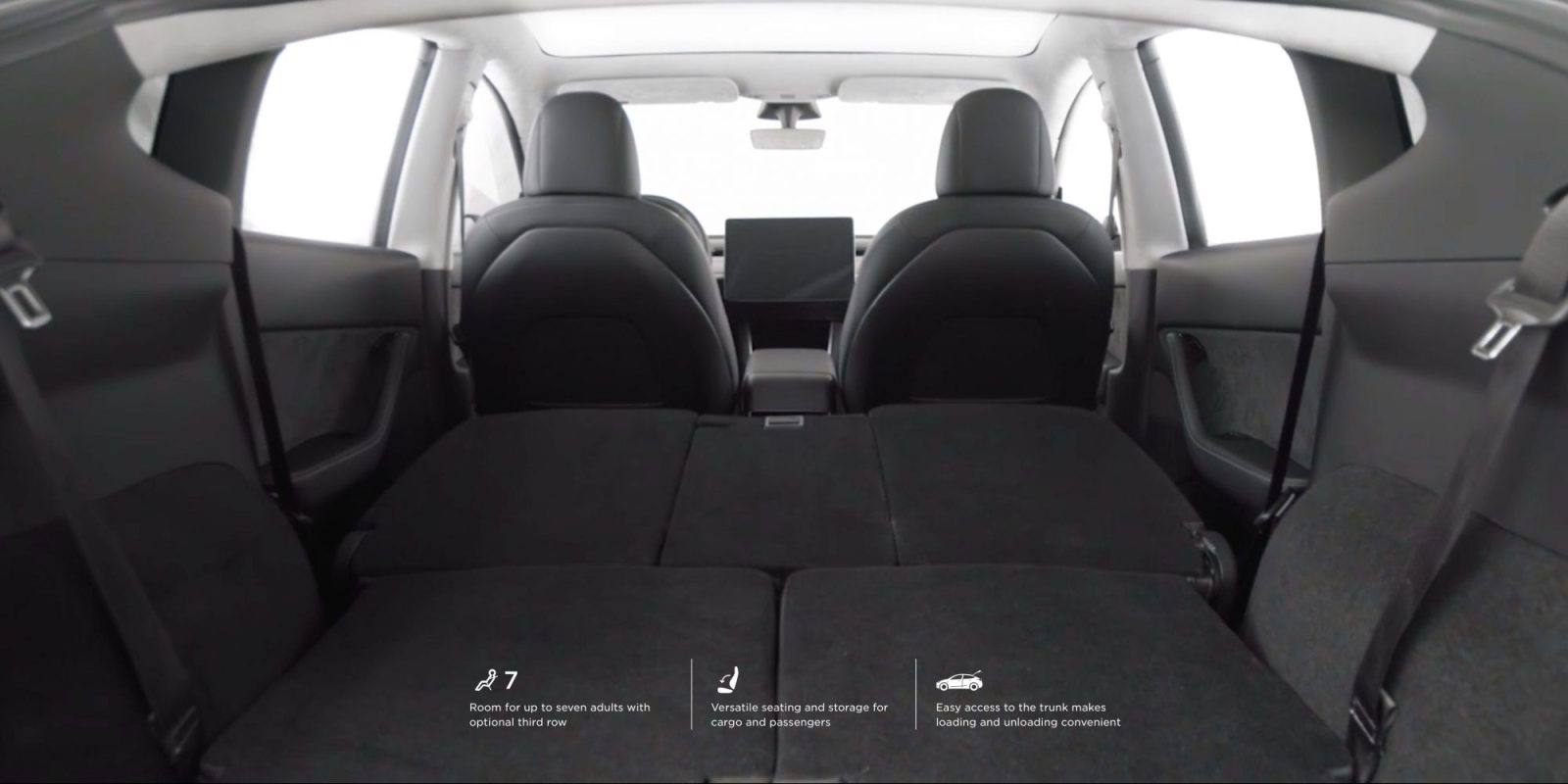 We haven’t seen much of the Model Y interior, and have assumed it would mostly look like the Model 3, just a bit bigger. But we have seen that the third-row seats aren’t very large, at least in prototype form.

But now that cars are shipping from the factory, we’re starting to see photos and video of the Model Y interior, including more charging options for devices than on the Model 3.

It’s getting repetitive now, but… the Model Y comes out in just a couple weeks, and there’s still a lot we don’t know about it. Since Tesla’s spec list is somewhat lacking, we’ve resorted to size comparisons using whatever objects people happen to have on them and even the people themselves.

As for the interior, we’re mostly relying on spy shots through windows or whatever else we can get.

But now we’ve got a short (vertical…) video showing a quick walkaround and the interior of a Model Y as it gets on a car hauler out of the Tesla factory.

The video was posted to YouTube on a new channel:

(edit: it appears the video was made private. So we’ll leave the words up talking about what was in it, but we’re sorry you can’t see it anymore)

On the exterior, we can see the chrome delete, new induction wheels, and this production model is notably missing a tow hitch. Part of the driver’s side is missing the chrome delete, but it looks like this is protective tape, rather than chrome peeking through.

Our quick scan of the interior shows that it “looks like a 3” in most ways. The seats look to be Model 3 seats, but lifted up on a base for a higher seating position.

The video also gives us the briefest look at the Model Y’s enormous glass roof, which one-ups the Model 3 by removing the crossbar above the front headrests. It looks pretty expansive, even though we only get a tiny glimpse of it.

We also saw some photos of the interior taken through the windows, but with quite good quality. These were posted to twitter by mrleetesla:

Those two narrow ports with rounded edges just below the rear air conditioning are USB-C ports.

It also has two USB outlets in the rear, allowing rear passengers to charge their devices, but there’s no data connection to the sentry mode system for those two ports.

Each of these ports are USB Type A, the traditional flat USB connectors you’ve seen for years. But a new type of USB is in town, USB C, which is faster and more flexible. Most devices are moving over to using this port, since it’s much better than the old USB.

Tesla does currently offer adapters between USB-A and various other plugs: Lightning, micro-USB, and USB-C. But moving to a USB-C port on the car is an improvement, since the port is simply better than other ports. Plus, it means you won’t have to flip the plug up and down a bunch of times before it’s in the right orientation (!!!).

Further, there’s also a 12V “cigarette-lighter” style connector in the trunk of the car (see the sunlit area in this pic). These are used in a lot of automotive accessories — for example, there are a number of 12V car power inverters available which let you tap into your car’s battery for portable power. This opens up several possibilities.

It could be big for lots of applications, including car camping. Though, that said, it may still be possible to drain your 12V battery by using devices from this outlet, because it’s not clear how Tesla distributes power from the high-voltage battery to the 12V system inside the car. In previous Tesla vehicles, except the original Roadster, the 12V system uses a separate lead-acid battery. We expect the Model Y will do the same.

What do you think of the Model Y interior? Are you happy that it “looks like a 3,” or were you expecting something else? What would you use the rear 12V outlet for? Let us know in the comments below.