Ride1Up 500 Series e-bike review: Could this be the best bang for your buck?

The Ride1Up 500 Series e-bike isn’t the fanciest e-bike I’ve ridden. It doesn’t have the nicest parts or the longest list of features. But it is a solidly manufactured e-bike with a powerful motor, high top speed, and bargain price of $1,099. Could this be the best bang-for-your-buck electric bike out there? Read on to find out…

Check out my video review of the Ride1Up 500 series electric bicycle below, then keep reading for even more details.

The 500 Series was the first model introduced by Ride1Up, and it has proven to be the company’s most popular model. At just $1,099 with free shipping, it offers incredible value that has yet to be matched by the larger direct-to-consumer electric bike companies like Rad Power Bikes or Juiced Bikes.

We’re talking about a high-speed electric bike here that can hit 25 mph (up to 20 mph with throttle-only operation with the higher speeds unlockable via pedal assist) and a realistic range of around 25 miles on throttle or even further when adding some pedal power.

Add that to a quality e-bike with a solid frame, nice multi-use tires, built in LED headlight and decent mechanical disc brakes, and this is a seriously high-value combination.

There are other, cheaper electric bicycles out there. Amazon is full of e-bikes in the $600-$700 range. But they usually use cheap batteries or motors and include no-name components that will fall apart on you.

With the Ride1Up 500 Series, you get decent parts like a Shimano transmission, Tektro mechanical disc brakes, Suntour suspension fork, Selle Royal comfort saddle (which really is comfy!), genuine LG-based battery, genuine Bafang motor, etc. These are all good parts, though not top shelf. At this price though, they’re a good deal.

And the difference they make in the ride is noticeable when compared to cheaper components.

I found the bike to be comfortable for commuting and pleasure riding, even though I opted for the straight handlebar option instead of the swept back bars. That puts me in a bit more of a forward position instead of a more upright, cruiser style position. For those that like the more relaxed, slower-paced cruiser position and choose the swept back bars, the bike might be even more of a pleasure. I generally like the straighter mountain bike-style bars on my bikes, though.

The pedal assist works well and is fairly smooth, though it of course can’t match the smoothness of a nice mid-drive electric bike. But at less than half the price of most mid-drive e-bikes, I’ll take a cadence-based hub motor pedal assist system any day of the week. The only thing odd I found about the pedal assist was that the lowest setting was a bit stronger than I would have thought, and the highest setting wasn’t as strong as I had expected. Basically, it seems that all of the pedal assist levels are a bit more geared toward medium power than I had anticipated. There’s not a wimpy level 1 or an extreme level 5.

Even though the pedal assist works decently well, I still found myself throttling most of the time. 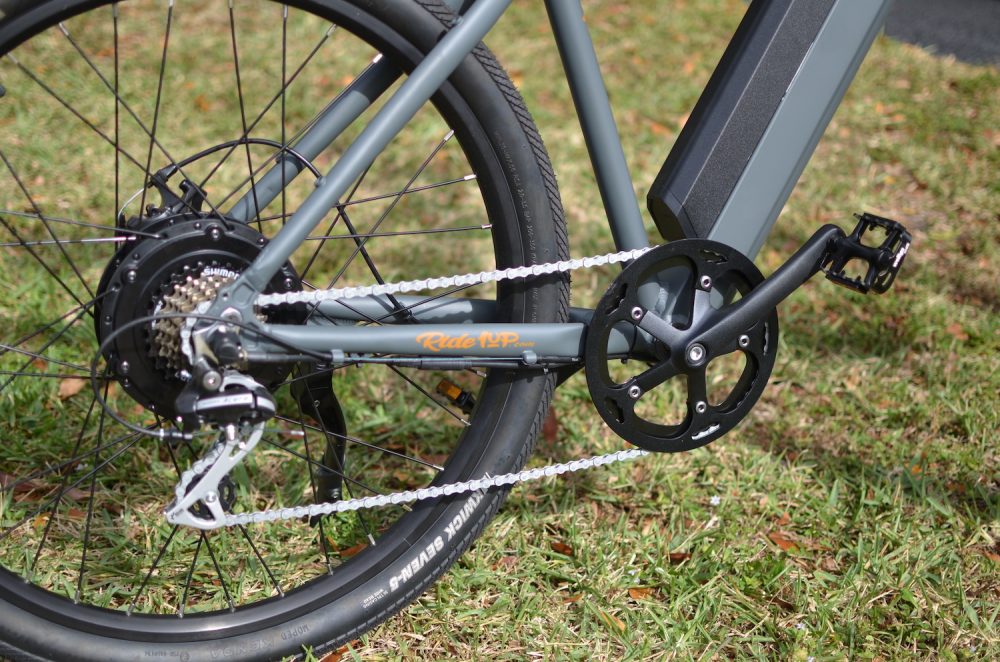 The area where I found the throttle most useful was when riding off-road. This isn’t just a city bike. With a strong frame and a front suspension fork that actually works, I had some fun jumping the Ride1Up 500 Series e-bike around in the local park. It’s still a hardtail, meaning you won’t have any suspension help in the rear, but between the 2.2-inch-wide tires and the front suspension, the bike felt fine for recreational off-road riding.

I wouldn’t take it on a downhill course though — it’s absolutely not meant for that. This is still a modestly priced e-bike intended for mostly road use, lest you forget.

As much as I like the Ride1Up 500 Series, you don’t get an e-bike with this kind of value without a catch — and that catch is that there’s a bit more assembly to do on this e-bike than most. There’s your standard wheel installation, pedal, and handlebar tightening, etc. But you also have to put the fork on yourself. It’s probably under an hour of assembly for anyone that is reasonably handy, but it can still be a bit intimidating for those who aren’t used to putting together a boxed-up e-bike. If the latter sounds like you, then I’d recommend taking the bike in the box to a local bike shop. They’ll probably charge a couple hundred bucks to put it together, but you’ll be sure it’s done right.

At the end of the day, the Ride1Up is a great option for a commuter or recreational bike. At $1,099, it’s an absolute steal. Sure, there are better e-bikes out there. I do love hydraulic disc brakes, integrated batteries hidden in the frame, 1,000W motors, and built-in racks/fenders — but those all add to the cost. And Ride1Up even has another nice bike that offers all of those upgrades and more. But if you are looking to minimize your investment while maximizing the utility of your e-bike, this 500 Series is the ticket.

With the money you’re saving, you can even splurge on some upgrades. Perhaps add in your own set of fenders, a rack, or upgrade to the 70% larger battery that Ride1Up offers, and you’d have a serious urban assault e-bike that still comes in at less than the cost of a Rad Power bike (and goes faster and farther too).

But let’s hear what you think of the Ride1Up 500 Series electric bike. Do you see the value, or am I full of it? Let me know in the comments below!