2020 WideWheel Pro review: One of the best e-scooters just got even better

If you’ve been looking into consumer e-scooters for any period of time, you’ve undoubtedly run across the WideWheel electric scooter. It was a runaway hit last year with its dual motors, full suspension and combined 1,000 Watts of power.

And with this year’s release of the WideWheel Pro from Miami-based Fluidfreeride, the famous scooter has gotten even better!

First off, take a gander at the scooter’s impressive specs below.

You’ll want to see this scooter in action, trust me. Check out my video review below. Then read on for the rest of my review.

The 2020 WideWheel Pro retains much of what made it such a successful scooter in the first place: the wide wheels, the powerful motors providing all-wheel drive, the full suspension, etc.

But it received some very nice upgrades that make it a more usable scooter for everyday commuting in addition to simply tearing up the neighborhood.

My original complaints about the first generation scooter over a year ago were centered around the display and the desire to see some structural improvements. As it turns out, the WideWheel Pro has made all of those upgrades and more!

The first and most visible upgrade is the new display. It replaces the simple LED interface with a data-packed LCD screen that is bright and visible, even in direct sunlight. You can use it to easily change gears (or more accurately: speed modes) as well as set your cruise control preference. To be honest, I’m not a cruise control fan and so I used the display to easily turn that feature off. It just weirds me out that I hand off control of the throttle to a machine. But I can see it being nice for long straightaways, so it’s a cool feature to have. 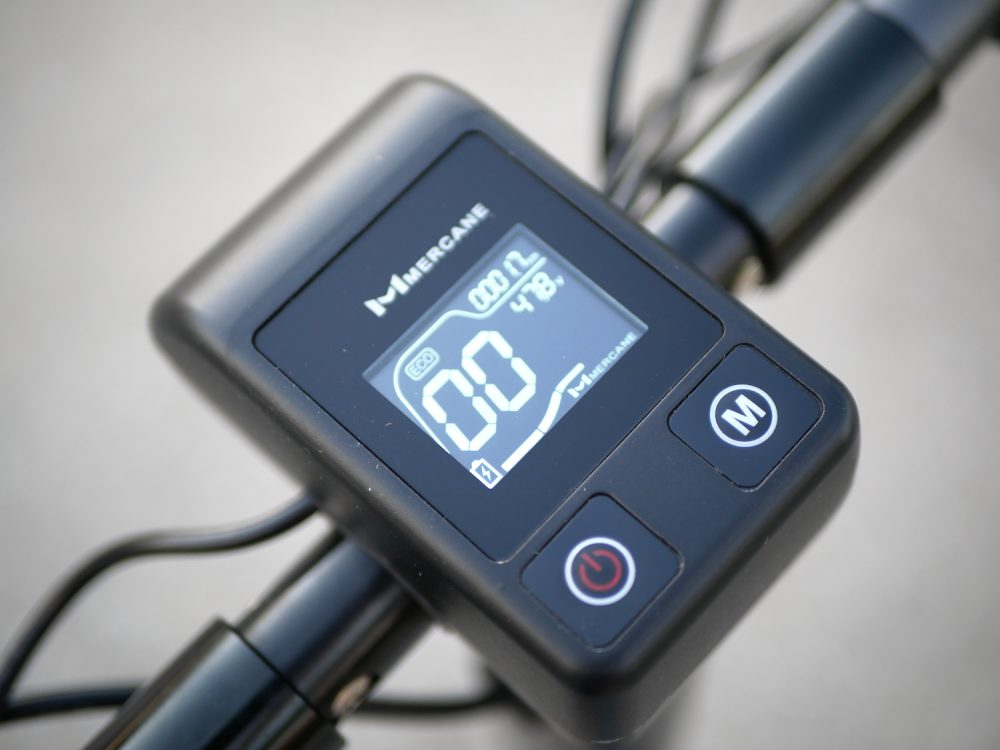 Next, the WideWheel Pro electric scooter got a new disc brake added to the front wheel, complimenting the existing rear wheel disc brake.

There was an issue with the original WideWheel’s single brake last year, but that was cleared up on the old model and the WideWheel Pro is coming in hot with upgraded front and rear braking right from the factory. 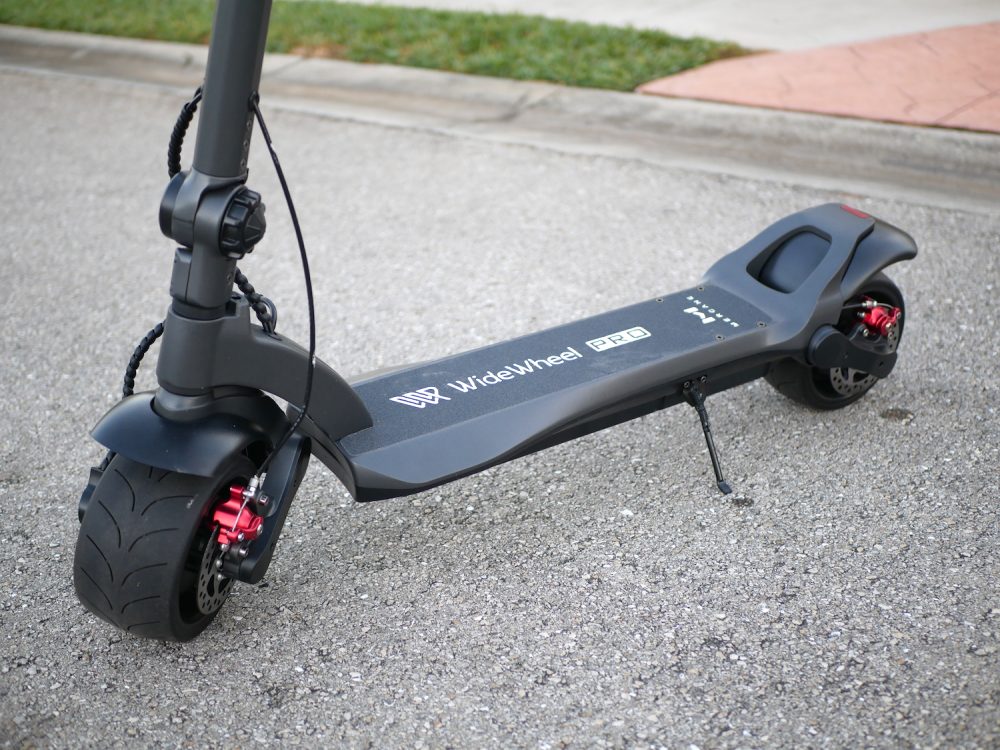 There are also new LED headlights that are SUPER bright. I don’t know why I still test LEDs by looking directly into them. You’d think I’d learn.

The battery has also been upgraded to a 720Wh pack, boosting the range of the WideWheel Pro compared to its predecessor. While high-speed riding will drop the range closer to 20 miles (32 km), riders should be getting upwards of 30 miles (48 km) of range in ECO mode. Mercane, the scooter’s manufacturer, actually rates the scooter for even more range, but the exclusive US distributor Fluidfreeride publishes the more real-world figure of 30-ish miles. Good for them!

And lastly, a number of structural upgrades were made to the stem, locking mechanism and fork to strengthen the scooter and make it even more ruggedized.

All in all these upgrades have improved what was already a great scooter, with a single exception: Weight. The 2020 WideWheel Pro is around 9 lb (4 kg) heavier than the original version. That’s actually kind of nice while riding because it feels more firmly planted, but it gets a bit heavy when carrying it around.

If you can look past the extra holiday weight that the scooter is still carrying, then the 2020 WideWheel is better in just about every way.

But that also means you have to be careful with it because it’s a powerful scooter and it really wants to ride. With just a bit of throttle, it is ready to take off, so you better be holding on. 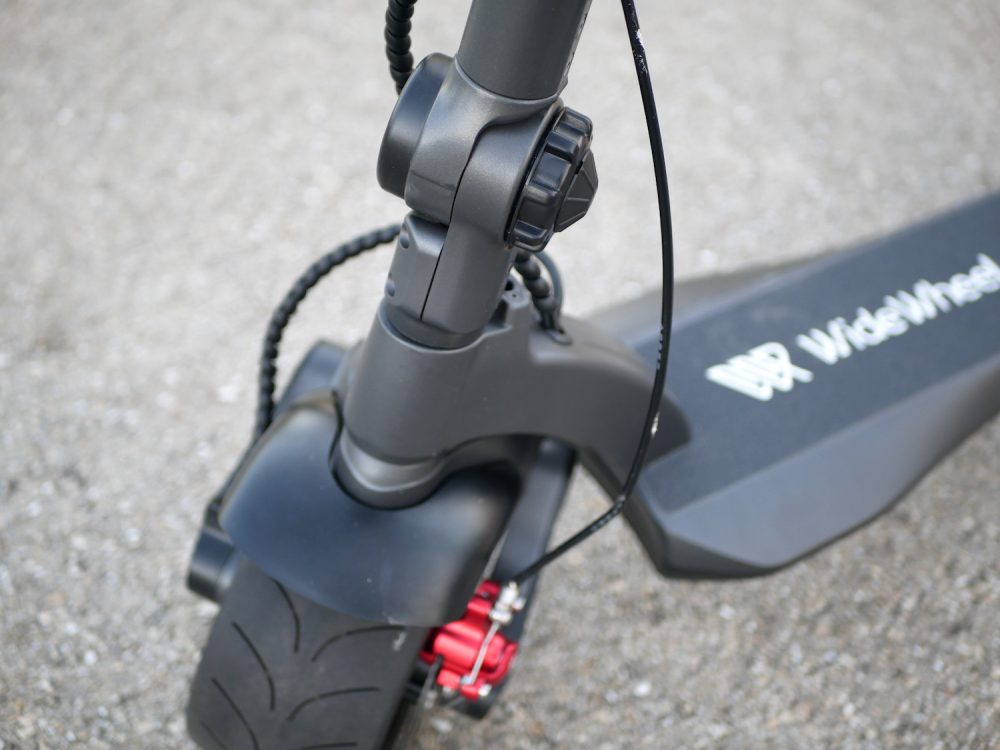 The dual brakes (and thus dual brake levers) are confidence-inspiring because they give you that familiar bicycle feel. You’ve got all the brakes you’ll need. And you’ll need them. Speeds of 26 mph (42 km/h) are no joke and you better be prepared. This is not an entry-level scooter. It’s a machine that flies.

It certainly feels stable at those speeds, but that doesn’t mean this is a beginner scooter. The suspension is forgiving, though it isn’t the longest travel suspension I’ve ever seen on a scooter. So you can’t go hitting potholes with reckless abandon like you can on some scooters.

Instead, the suspension on the WideWheel Pro is all about comfort. It smooths out surface imperfections, sidewalk cracks, train tracks, etc. But it’s not going to take you down mountain trails. It just doesn’t have the travel for that. Instead, I use it to hit things like smaller speed bumps without slowing down as much or hopping down from a curb without shattering my ankles like I would on a Lime scooter.

So while I might ding the weight a bit and be left wishing for a bit more suspension travel, I’m otherwise super happy with the WideWheel Pro. It’s a fast and long-range electric scooter that folds down into a tiny footprint and features a pile of upgrades that make it better than ever.

The WideWheel Pro is regularly priced at $1,349, but you can get it for just $1,299 with free shipping in the US right now thanks to Fluidfreeride’s sale.

And before you go, let us know what you think of the 2020 WideWheel Pro electric scooter in the comments below!