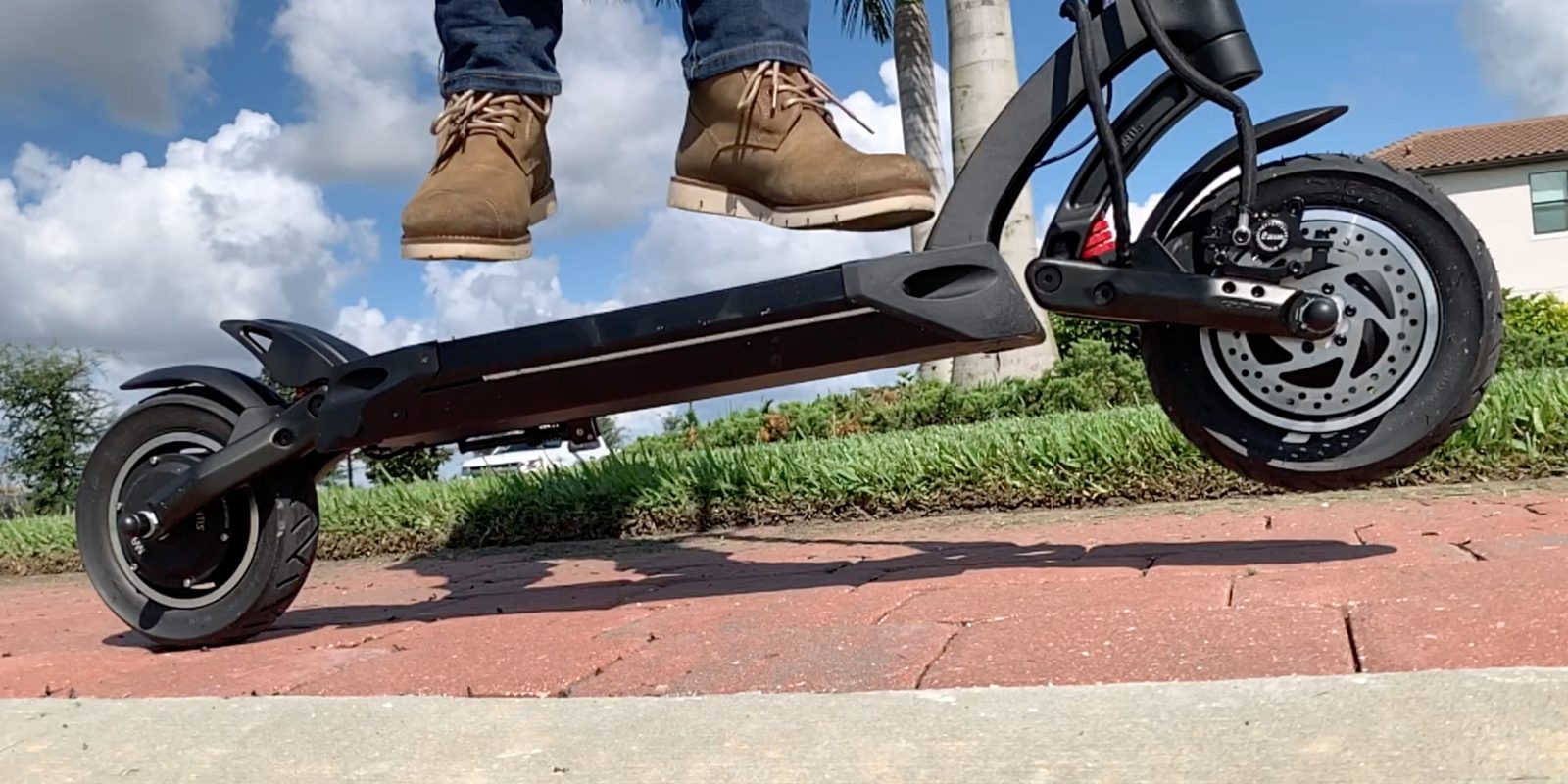 I never thought I’d be as comfortable going 40 mph (64 km/h) on an electric scooter as I am on the Mantis electric scooter from FluidFreeRide. This scooter is not only crazy fast — it’s also crazy comfortable to ride. Check out the full review including the video below.

Let’s start out with a bit of safety disclaimer here: Fast electric scooters can be dangerous. There’s no way around it. You have to be careful on these things. And wearing proper protective gear when riding at high speeds is highly recommended, such as a jacket, pants, helmet, and gloves.

But despite the higher risk of high-speed scooters, they can also be amazing commuting tools, as I discovered on the FluidFreeRideMantis electric scooter. And if you’ll let me, I’ll show you what I mean.

There’s no substitute for seeing it with your own eyes, so make sure you check out my video review below. Then join me for the tech specs of this powerful electric scooter, and learn why I think it works so well as an urban or suburban commuting e-scooter.

First of all, there are two versions of the Mantis electric scooter available. I’m on the Pro version, which comes with the larger 24.5 Ah battery with brand name LG cells, plus full hydraulic disc brakes, and an upgraded Minimotors display. 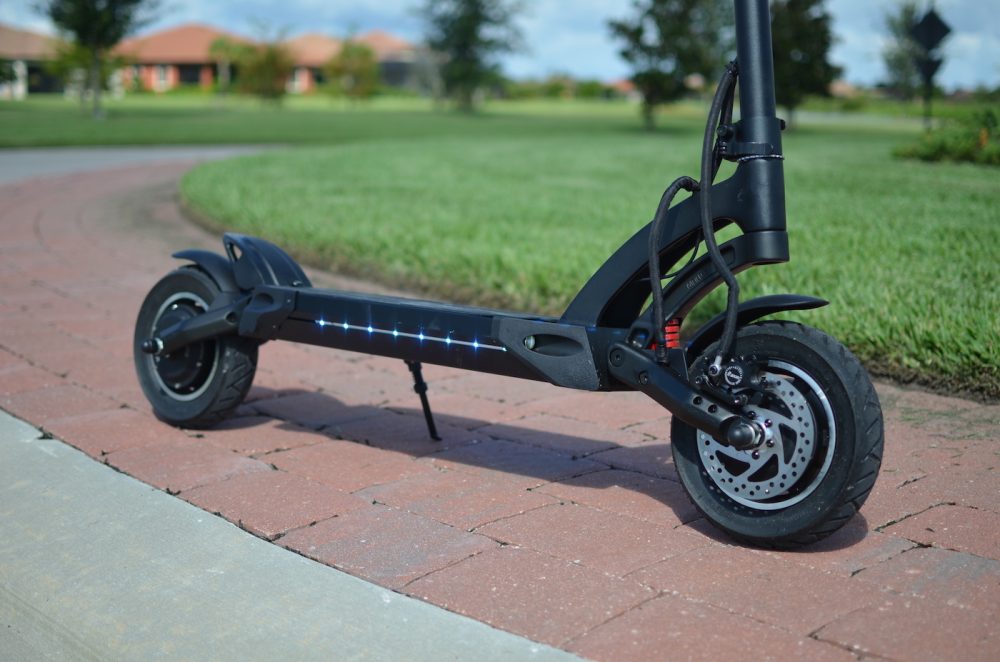 First things first: How does it ride?

This is the most stable I have ever felt on a 40 mph (64 km/h) scooter. And I’ve ridden my fair share of them.

There’s just something about the geometry of the Mantis electric scooter that makes it ride so smooth and true. I feel like I can literally let go of the handlebars and it will just track perfectly. Obviously, I’m not about to do that, but I did play with just having the tips of my fingers on the bars and I honestly think it would work. I’m just not going to bet my skin on it. 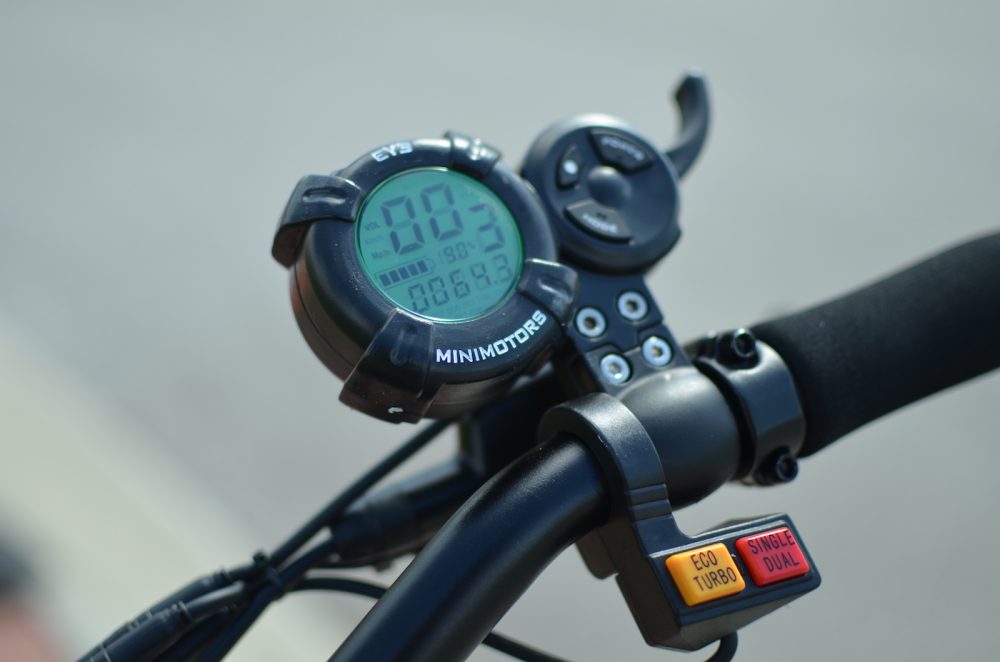 The settings menu accessible via the display really lets you tune the scooter to your desired performance. You can adjust how strong the acceleration/torque feels, how strong the braking is, set speed limits and more. Plus you can make macro adjustments on the fly by using the single or dual motor engagement button or the Eco/Turbo button, both reachable with a thumb while riding.

I kept mine in dual motor and turbo mode most of the time, but to be honest some people might find that to be too much power. With a slight blip of the throttle, you can take off faster than you intend. In fact, I was usually doing front-wheel burnouts when I kept it in high power Turbo mode.

If you’re maneuvering in a parking lot or just don’t want as much power as the Mantis electric scooter has on tap, a quick switch to Eco mode or single motor drive can reel in the power quickly and easily.

Next, look at this suspension. Both wheels have swingarm suspension and it simply works great.

The ride on the street is super smooth. Hitting small potholes or manhole covers is almost unnoticeable. Big potholes can still be a problem though since the wheels are only 10.5 inches. So you still need to watch out for those.

I also took the scooter off-roading where I had a blast. There’s just so much power in those dual motors that the FluidFreeRide Mantis electric scooter can climb up and over just about anything. Wet grass was almost tricky simply due to the power and the ability to easily start drifting. On rocks and gravel, the suspension really shined. The scooter still bounces around a bit — that’s the nature of these small EVs. But it was more bouncy than bone-shattering, which is what you’d feel on scooters with poor or absent suspension. 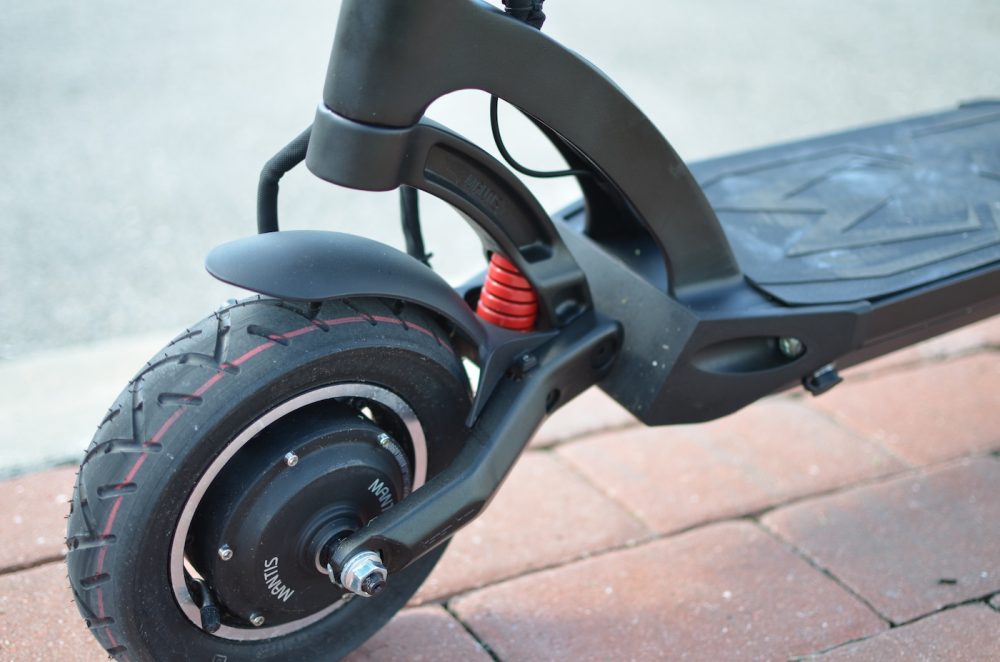 One thing that actually surprised me about the Mantis electric scooter is that it isn’t massive. I was expecting a giant scooter — and while it isn’t small, it also isn’t gigantic.

The Pro version weighs in at 65 lb (29 kg) and the base version is 61 lb (27 kg). That’s not lightweight, but it’s a lot less than the 77 lb (35 kg) Turbowheel Lightning I reviewed and which has similar performance specs.

The foot deck is also large enough to feel comfortable but not so massive that it feels like it needs its own zip code. I’m currently riding the Currus NF electric scooter which also hits 40 mph (64 km/h). I don’t want to spoil the upcoming review too much, but that one has a deck so big that I seem to catch it on corners when I wheel it around the house. It’s still a great scooter but it’s an example of a deck that is almost too big. The FluidFreeRide Mantis electric scooter has a comfortably large deck without adding excess weight or bulk. 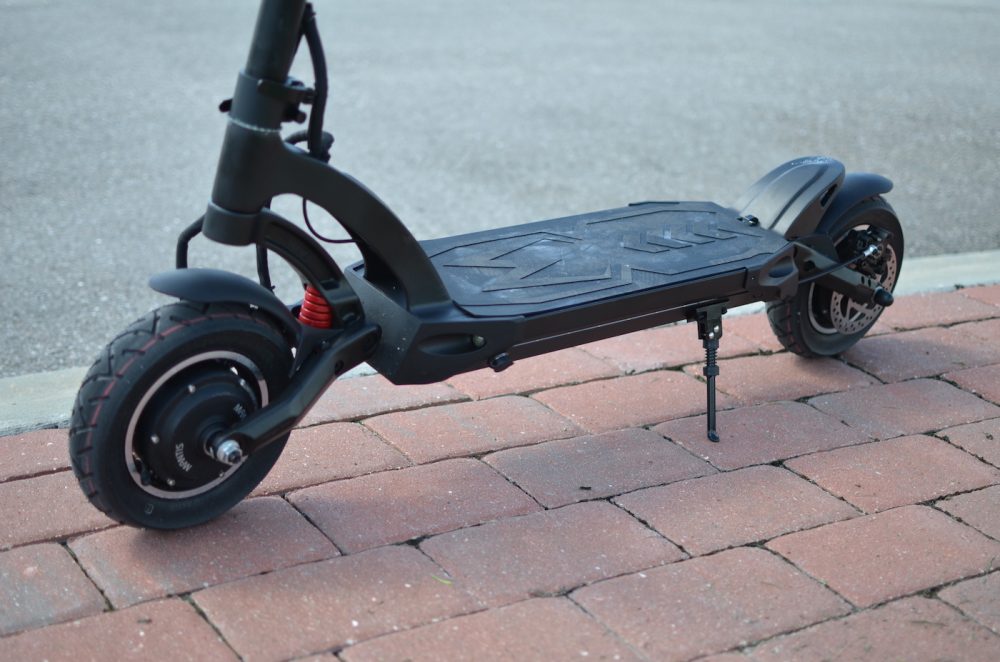 When it comes to range, I didn’t hit the 55 miles (88 km) of promised range, though I also didn’t keep it in Eco mode. I was getting somewhere around 41 or 42 mi (66 or 68 km) of range while riding around at nearly top speed, which I think is pretty darn good. This is the Pro version, by the way. So expect closer to 25-30 miles (40-48 km) of range on the base version if pushing the scooter to the max.

For those that actually commute on their electric scooters and need both speed and range, the FluidFreeRide Mantis can deliver it.

One area that often goes overlooked on electric scooters is the lights. While the Mantis doesn’t have a large main headlight up on the handlebars, it’s got plenty of bright deck mounted head and tail lights, plus it has under deck lighting.

I really like underdeck lighting because it creates a cloud of light that the scooter seemingly floats around on. There’s no way to miss it and you are immediately obvious to anyone around you.

If you plan on doing actual off-roading at night then you’ll want to add a big honkin’ headlight anyways, since these lights are mostly for becoming visible to cars. In fact, it wouldn’t be a bad idea to add a big headlight higher up anyways for that purpose, even on-road. But right out of the box the FluidFreeRide Mantis electric scooter is highly visible at night.

In my opinion, the Mantis electric scooter is an excellent commuter.

The fact that these electric scooters can hit speeds of 40 mph (64 km/h) doesn’t mean you have to ride that fast. I was plenty happy riding around at 30 mph (48 km/h) as well. But it’s nice to be able to hit higher speeds when I’m riding on larger roads and bike lanes on the sides of highways.

In my opinion, the higher speed is a safety feature in those scenarios. And of course, I’m wearing proper protective gear, including a jacket, pants, and full-face helmet — something I recommend everyone should wear. Gloves aren’t a bad idea either, while you’re gearing up. 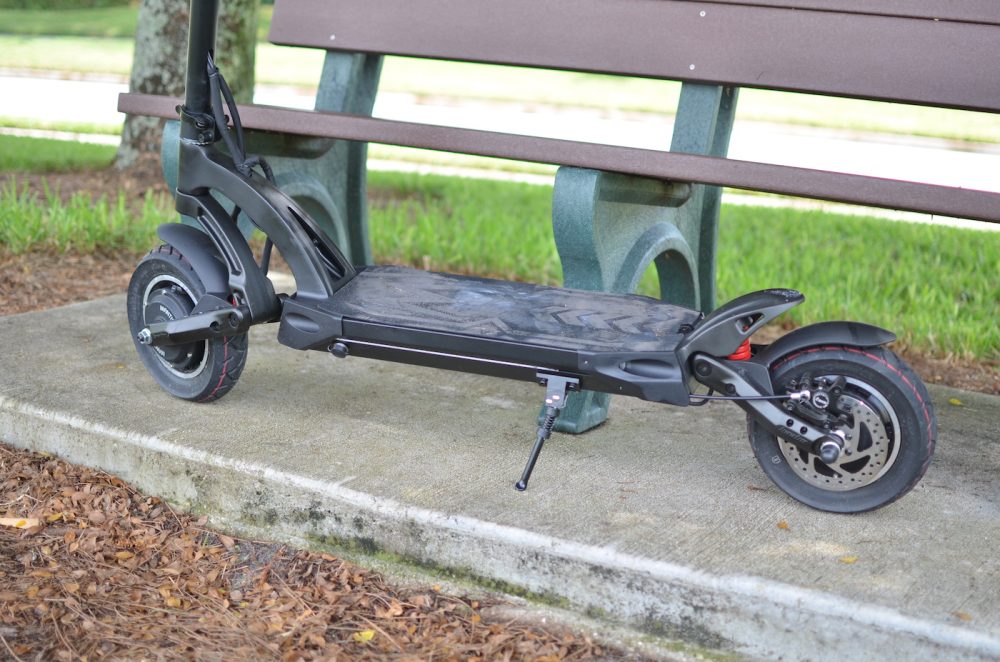 And I don’t necessarily recommend a fast scooter like this for everyone. It takes a certain level of maturity and responsibility to ride these vehicles safely. They have a lot of power on tap and you need to know when to use it and when to ride more slowly and gently.

But if you need a scooter that will stand up to daily use and abuse, and will go the distance while hitting high speeds, the FluidFreeRide Mantis is likely a great option for you! And you can save between $200 to $300 on the scooter if you buy one in the next few days, so hurry before the sale ends!

Behind the scenes look at Jeep's new high power e-bikes

Polestar to bring this cool EV concept to production