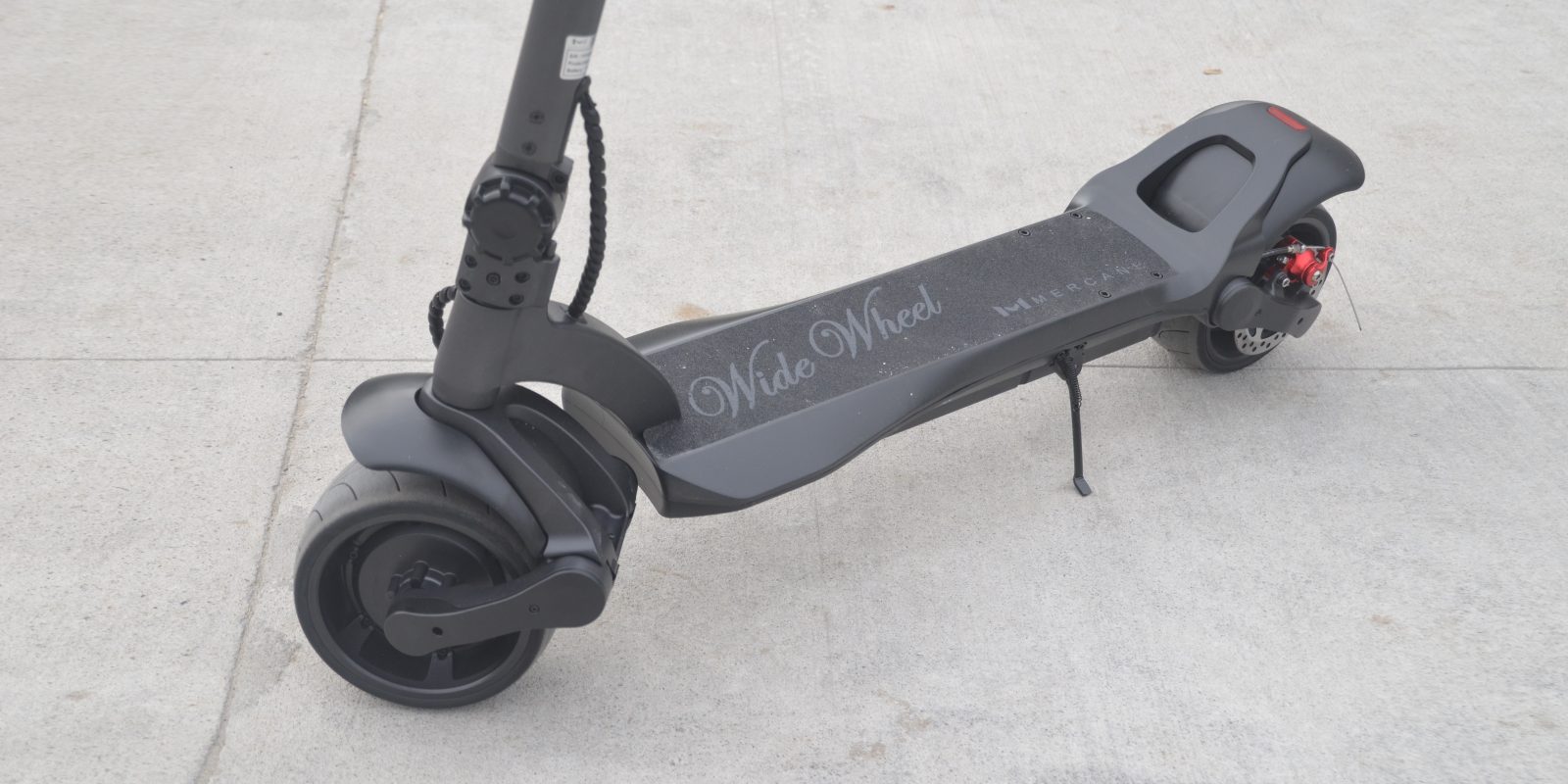 I’ve ridden a ton of electric scooters, but I’ve never ridden anything quite like the Mercane WideWheel electric scooter from FluidFreeRide. With dual 500 W motors (that are almost certainly each putting out closer to 1000 W), dual front and rear suspension, crazy acceleration and high top speed, this scooter is just too much fun!

Most people who have ridden an electric scooter are more familiar with the Bird and Lime scooters.

Studies have shown that the majority of the public has been supportive of the electric scooters, even if there has certainly been some controversy.

While those scooter sharing programs are great for introducing the scooter concept to a larger audience, the actual scooters they use are notoriously underpowered.

The Mercane WideWheel electric scooter is a lot of things, but underpowered is not one of them. Just check out the tech specs below. 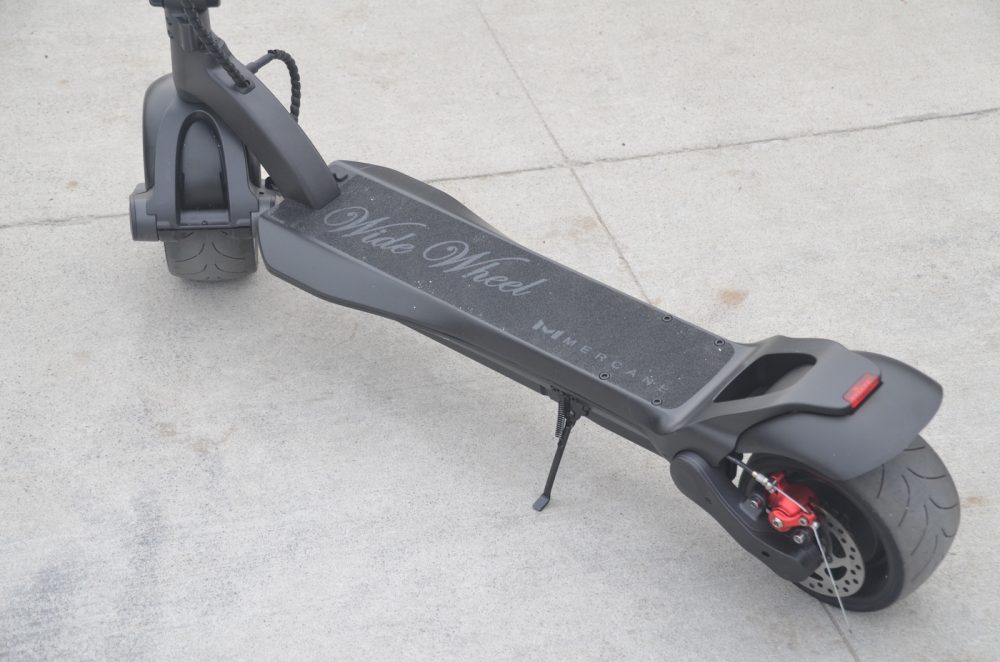 This is where things get fun. When I hopped on the WideWheel and gave it throttle the first time, I almost fell off the thing. I certainly wasn’t mentally or physically prepared for the torque and power that those two motors had, but they shocked me with their performance. This is not a cheap, dinky scooter.

There’s a single motor version of the WideWheel that I’ll bet is still quite punchy, based on how hilariously powerful the two motors were. Even though the motors are marked as 500 W, there’s no way they are only putting out 500 W. I’ve ridden plenty of 1,000 W rides that don’t have this much power. The performance of this scooter feels more like 1.5 kW at a bare minimum.

If you have big hills that other scooters have struggled to climb, this is the scooter for you.

The WideWheel’s wide wheels are pretty much a necessity to get any traction out of those torquey motors. With 4″ wide treads, they still just barely manage to hang on and transfer the power to the ground. Did I mention how impressive this scooter’s power is?

On asphalt roads and concrete sidewalks, I felt pretty confident giving wide open throttle and hanging on as I took off like a rocket. But when I moved to dirt trails, I had to ease on the throttle to keep from spinning the tires. While the sensation of all-wheel drifting an electric scooter is fun, it’s probably not the safest way to ride, so I tried to reign in my inner child for the rest of the off-road testing.

One of my favorite parts of the scooter, besides the ridiculously powerful dual motors, is the super responsive suspension. While most other electric scooters don’t have any suspension, and some have a weak suspension fork, the WideWheel offers true swingarm suspension in both front and rear. While riding on dirt trails the scooter took everything I threw at it – tree roots, tire tracks in hardened mud, even chunks of ice left over from a recent ice storm. The suspension ate it all up and asked “what’s next?”

Performance back on the road was even better. The suspension makes you feel like you’re positively gliding along the road surface. Small bumps literally disappear, and larger potholes turn into minor nuisances. The wheels are still just 8″, so don’t expect to completely ignore potholes. But at least they become much more comfortable with the WideWheel electric scooter.

What the WideWheel offers in performance, it somewhat lacks in user interface. Don’t get me wrong, it’s easy to operate and feels comfortable to use. But don’t expect any fancy features. There’s no speedometer to check your speed. Instead, I just gauged the speed by how large my goofy grin was growing.

There’s also no screen to display battery percentage. Instead, you get the old fashioned LED light bar. It works fine, but I’m a data person and always like having more resolution in my battery reporting.

I will say that the disc brake works great, and it’s nice to have a true brake lever like on a bicycle. Some scooters rely entirely on regenerative braking which sounds nice but isn’t very strong in practice. I’ll take a mechanical clamping disc brake any day.

The lights are also pretty good, though if I could make one change it would be to increase the head light size. The tail light is plenty visible and also functions as a brake light when you pull the brake lever – another added touch. 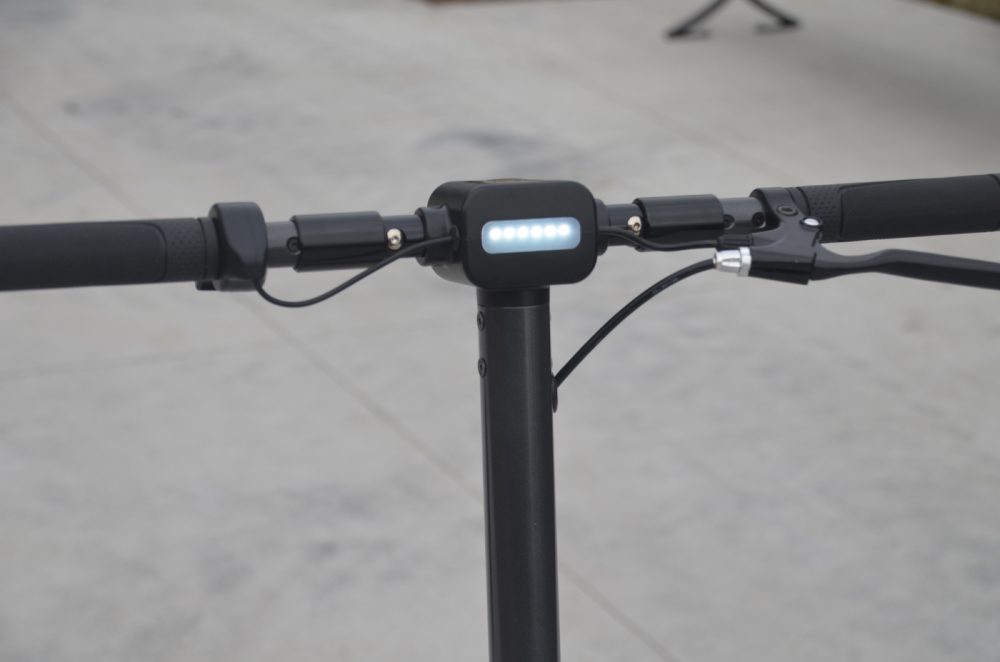 The Mercane WideWheel electric scooter folds up surprisingly small. The hand grips fold in meaning the entire scooter is no wider than the baseboard. You could stash this scooter under your desk and probably forget that it’s there. Folded, the scooter is about 43″ x 16″ x 8″ (109 cm x 41 cm x 20 cm).

The folding mechanism just above the front wheel is a bit odd compared to most other scooters. You have to unscrew it about 5 or 6 turns until it slides out enough to let the stem fold down. The good news is there is no way it’s going to fold on you during use. The bad news is that you never really know how many turns to spin it without just trying to fold the stem until it works. The first time I actually backed it out all the way on accident and had to screw it back together. After a few times I got used to it though and now it’s second nature. It’s just a bit different compared to other scooters I’ve used.

At 45 lbs (20 kg) for the dual motor version with the larger battery, the scooter isn’t lightweight. But let’s be reasonable here. You can’t ask for two high power motors with a big battery and still expect to one-hand-toss the thing in your trunk. So I’m not even going to hold that against it.

If this scooter doesn’t put an instant smile on your face then you’re just dead inside. Who hurt you?

The Mercane WideWheel from FluidFreeRide is simply a hands down funmobile. This thing is crazy strong and super comfortable thanks to its powerful dual motors and plush suspension. If you are looking for a powerful scooter to handle hills, keep up with cars and still collapses down to a small size, you’d be hard pressed to find one better or more exciting than the Mercane WideWheel.

At $849 for the single motor version or $999 for the dual motor and larger battery version, this scooter is quite reasonably priced. You can’t get this much power for cheaper elsewhere without buying direct from Asia, and then you wouldn’t get a warranty and service from a US company like you do from FluidFreeRide.

I definitely recommend this scooter to those looking for something more powerful. If you can get past the minimal interface and slightly finicky folding mechanism, then the scooter is an absolute blast to ride and a much better commuter than any dinky 250W scooter.

What do you think of the Mercane WideWheel electric scooter? Let us know in the comments below.