GM says opposition to California emissions rules has a goal: a faster shift to EVs

Earlier this week, Electrek spoke with Mark Reuss, GM’s president, about the dedication of the company’s first all-EV manufacturing plant. Our first question to Reuss was about why GM sides with the Trump administration and against California emission standards. He replied that GM’s motivation is about one thing: avoiding further investments in conventional hybrids, instead leapfrogging to an all-electric future.

Our question to Reuss: “Your plans for EVs sound good, but how do you resolve that with your position on the battle between Washington and California on clean-air rules?

“It started with me saying, can we have a national ZEV standard that’s based on zero-emission vehicles? What we really want is one national standard first. The multiples on a business basis in that regulation favor hybrids.”

“You have to look at the multipliers on greenhouse gas credits. It doesn’t favor battery electric vehicles in the short term.”

Let’s be clear: there are no hybrid “multipliers” in existing legislation. What Reuss probably meant was that no-plug, gas-powered hybrids could conceivably play an important role for some automakers in meeting Obama-era emissions standards. Those rules state that an automaker must achieve an average fuel economy of 54.5 miles per gallon by 2025. (That number equates to about 40 mpg on published EPA fuel-economy values.)

Reuss assumes that the agreement signed by BMW, VW, Honda, and Ford with California will limit the number of EVs that an automaker can produce. Yes, there are caps on the number of EVs that can be used to reach GHG-emission targets, but obviously carmakers (if they believe in EVs) can voluntarily exceed those targets.

What’s been made public from the four-automaker California “framework” is not much more than a few bullet points. But as the official statement notes, the framework “would speed the transition to electric vehicles” and sets a goal of working to a national standard. That’s exactly what GM professes to support. 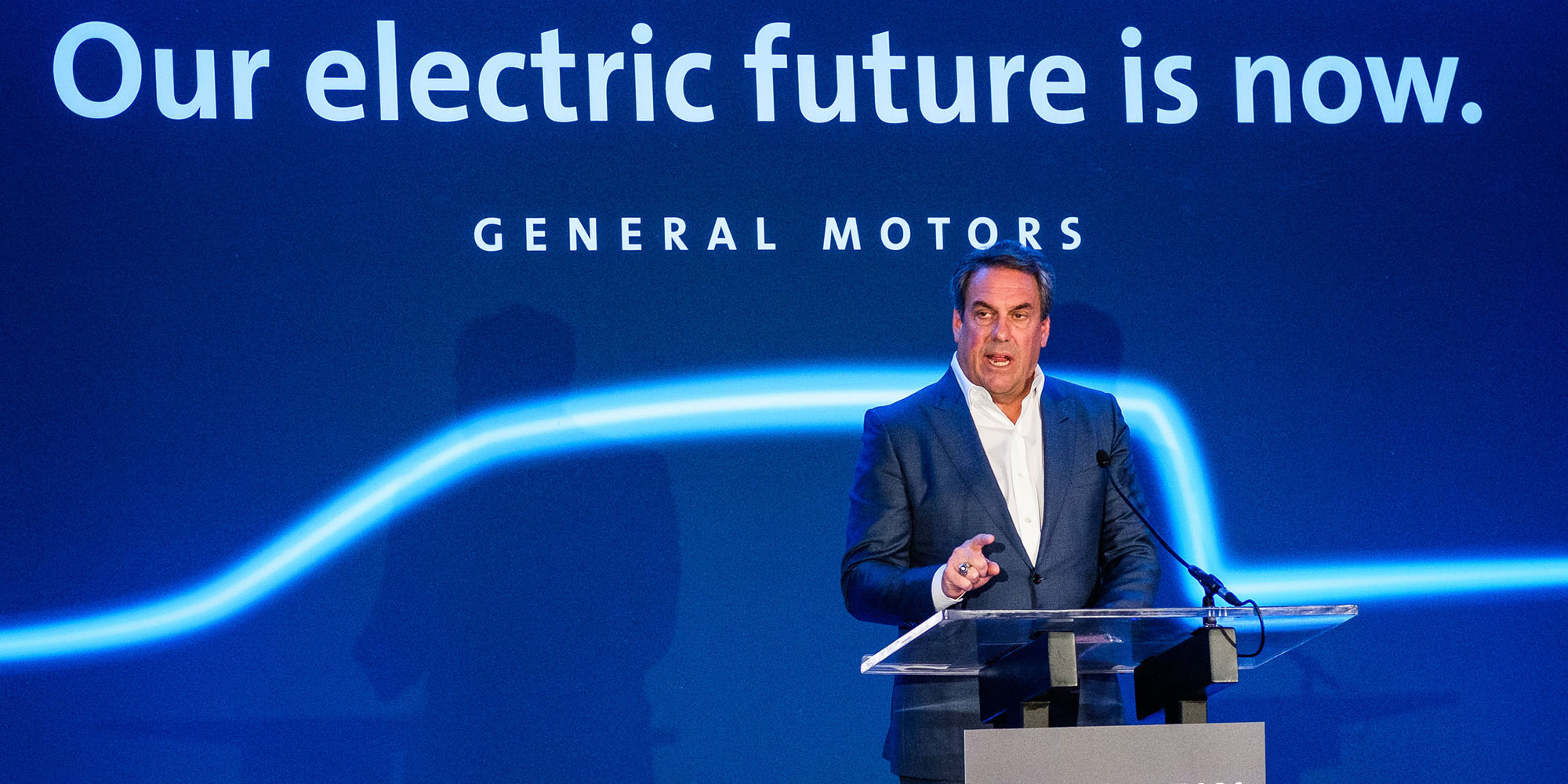 GM insists that its motivation is to avoid splitting the nation into two regulatory markets. And that the company doesn’t want to take a side. But it’s a hard fact that the company continues to back The Coalition for Sustainable Automotive Regulation, and that group’s motion to intervene on behalf of the Trump administration.

“We believe in regulation going forward. We believe that it should shift even faster to EVs. We want to be prepared for an even faster adoption rate for EVs. It’s going to take a lot of engineering and scale and everything else to make EVs work and be profitable and flip us to where we want to be. So it’s not that we sided necessarily with, you know…It’s not our intention to side with the Trump administration.”

“What we’re trying to do is get involved, have a seat at the table, try and drive towards a single standard.”

It’s hard to square that GM’s “intention” is not to side with Trump, but the company, as a matter of legal action, supports the administration’s authority to revoke California’s pollution waiver. The wavier allows the state to set more stringent tailpipe emissions standards than those established federally. California regulators, who have the right to set standards under the Clean Air Act, are arguably the globe’s most powerful government body ensuring a zero-emissions future.

Parks re-asserted how GM plans to work toward that same zero-emissions future:

Meanwhile, inside industry sources told me that the four-automaker framework would provide more, not fewer credits for pure EVs. What’s frustrating and confusing is that GM is already in compliance with California ZEV standards. And based on the company’s $4.5 billion in an electric future, it will continue to exceed those standards or requirements that are likely to emerge.

Environmental organizations believe that GM is playing an odd game of stiff-arming California to get a longer runway for very-real emissions in the short-term, even as it works toward achieving its longer-term (yet still unproven) environmental aspirations.

Short-term, Long-term, or Both?

David Reichmuth, senior engineer for the Union of Concerned Scientists Clean Vehicles Program, believes GM can do the right thing for clean air and carbon emissions short-term and long-term at the same time, regardless of the battle between California and the federal government.

“There’s a need for us to go quickly to electrification, but we also need standards for gasoline vehicles, including non-plug-in hybrids,” said Reichmuth. “EV sales will rise. But in the next five years, the vast majority of vehicles will be internal combustion. Having standards for gasoline cars will be critical. Those vehicles will be on the road for another 15 to 20 years.”

To be clear, by GM siding with the Trump administration on the waiver, General Motors states that it is neither advocating for Trump’s plan to freeze fuel-economy standards at its current level or the Obama-era 54.5-mpg target. To hear president Mark Reuss and other GM leadership, they just want a national standard and an all-EV future. Full stop. Reuss this week told me:

“I want to go to battery-electric vehicles. I’m not going to spend money on hybrids. I want to get to EVs in a responsible way from a business standpoint so that we are the leader in zero-emission vehicles. We are trying to go as fast as we can for the long-term solution. You’ll see how deep and far our electric portfolio is.”

He’s referring to GM’s goal of introducing 20 new EVs by 2023, a couple of which have already been revealed in China. GM openly admits that it will raise those billions of dollars by continuing to sell vehicles using existing technologies rather than investing in hybrids, which it considers a stop-gap measure. GM emphatically says no more hybrids.

Reichmuth and other experts believe that GM’s 2018 National ZEV proposal was poorly designed. He believes that the proposal allows the company to game the system (and thereby produce fewer EVs). And colleagues at Electrek call it “garbage,” because it sets targets that are way too low.

GM believes those assessments are unfair. It was only intending to create a strawman proposal as a starting point for further discussion.

For UCS’s Reichmuth, it’s not a matter of GM increasing the output of EVs over the next few years ­– OR improving the efficiency of the hundreds of thousands of big pickups GM currently sells. “They should be doing both,” he said. Similarly, GM could remove itself from the Trump lawsuit, have robust discussions with California, and build a gazillion compelling EVs – all at the same time.

Tesla, Rivian, and other pure EV makers don’t have to phase out gas cars. That’s a huge advantage.

But GM and other legacy automakers need to heavily invest in EVs while also reducing emissions of their existing lineups. The regulations, except for the pitiful Trump proposals, will require them to balance expenditures for both. That’s the right thing to do, even if it’s challenging.

And if they put out proposals for a ZEV standard, even in draft form, it should be aspirational and aggressive, without any question about how it compares with what’s already on the books now.

Reuss, Parks, and others at GM make exuberant statements about the company going electric. Amen. And they express a strong commitment to engaging with both California and the feds to enshrine a pure zero-emissions future into law.

But then (psych!) GM for some inexplicable reason can’t remove its backing from its support of the Trump administration’s intervention. They invoke the need for a “national standard” as the reason. It’s a red herring.

That said, I’m not in the camp that believes GM’s objections to California are an evil smokescreen designed to allow the company to pollute and reap profits? You make your own call. Of course, the company’s checkered history with EVs doesn’t instill much trust. As we stand today, GM offers only one small electric car that doesn’t sell in high numbers. (BTW, I love my Chevy Bolt.)

To understand if General Motors will indeed deliver on its EV banner-waving and plans for 20 new, high-volume EVs in the next three years, we have to wait and see. Today’s announcement for the GMC Hummer EV pegs production in fall 2021. The company hints at many more EV announcements coming early this year.

“Don’t give up on us. The proof is going to be in the pudding. Everybody’s debating this. We will continue to try and articulate our position. We’re deeply committed to this electric future.”

But the company does not have to wait for a year-and-a-half to show us the pudding. GM could withdraw from the Trump lawsuit today – while still moving with haste toward its EV goals. In fact, there is no other action it could take that would send a stronger signal about its commitment to the environment.