SEMA is a show where hot rodders and customizers come together to show off interesting projects that push the boundaries of what people can do with aftermarket parts. Lots of manufacturers show off one-off concept builds here.

We’ve already seen a heavily modified Model 3 by Unplugged Performance, an old C-10 pickup with 450 hp from two Bolt batteries, and a ’69 Camaro with an electric “crate motor” from Chevrolet.

Now Ford has a concept to beat them all, the Mustang Lithium one-off concept built in collaboration with Webasto, an electric car equipment manufacturer. 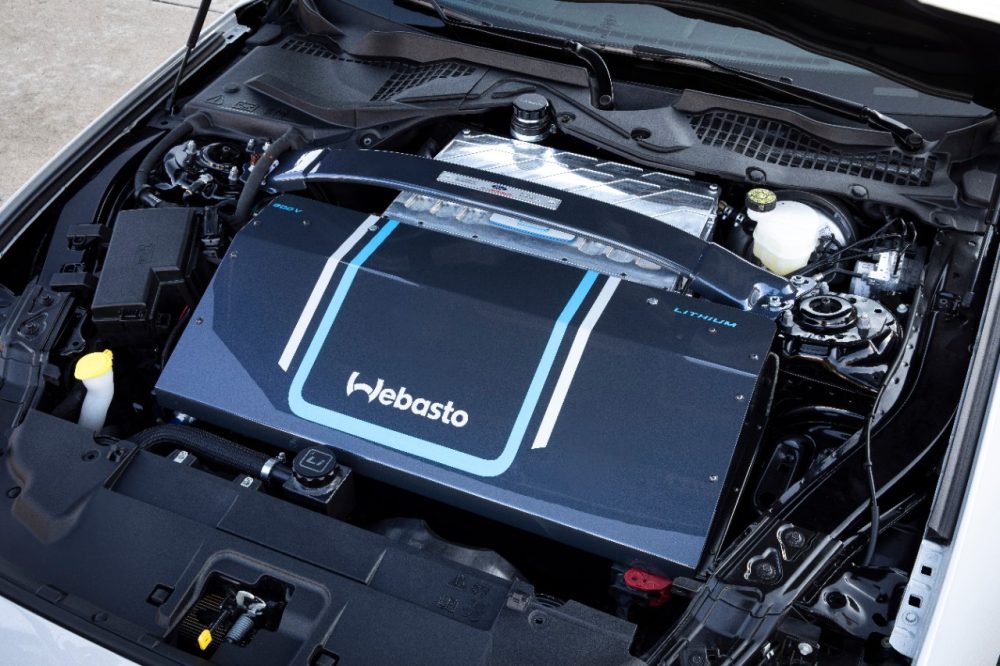 The Mustang Lithium produces double the horsepower of Chevy’s C-10 concept, with over 900 hp (671 kW) of power and 1,000 ft-lbs (1355 Nm) of torque. This power is delivered from an 800 volt battery system, a rarity among electric cars. Porsche is the only other manufacturer currently building a car with 800 volt EV systems.

The Mustang Lithium uses Webasto’s “TurboDX” charging system, which is basically just a standard level 2 charger.  Their website suggests that it only charges at 16 amps, which translates to around 3.3 kW charging.

While we don’t know the size of the Mustang Lithium’s battery, yesterday’s photo made it seem fairly small. So the car is likely to have a relatively small amount of energy storage, and seems to focus more on drag strip or short track performance, rather than being roadtrip-ready. 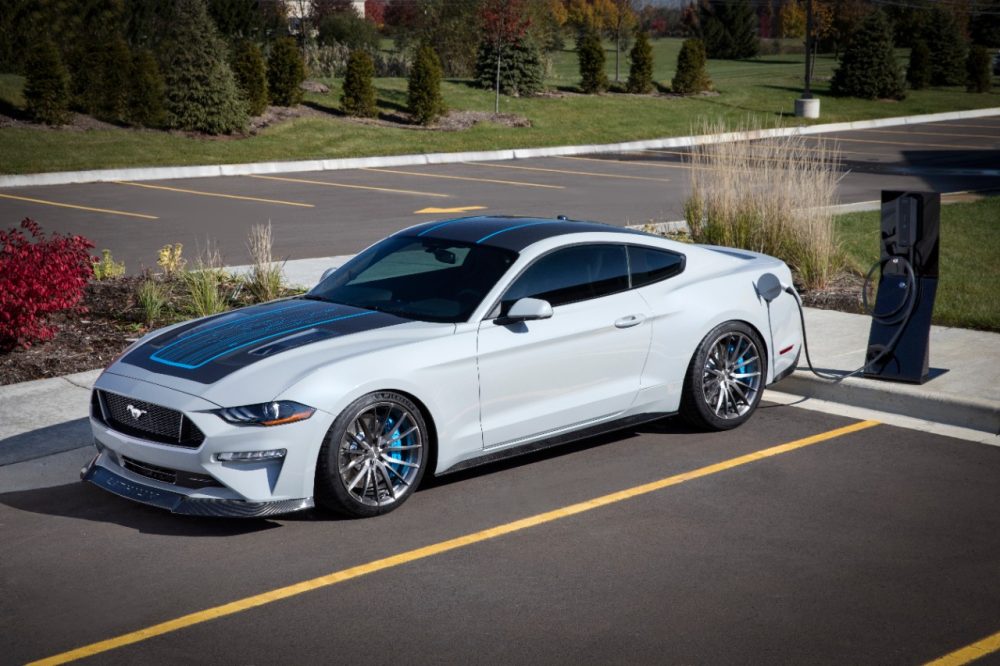 While the electric Mustang Lithium is only a one-off concept, Ford states that it is being used as a testbed for battery and thermal management technologies they are developing with Webasto.  It also exists to gauge interest among the relatively staid muscle car crowd.

The hope is that showing off a concept with such high performance chops, at a show where all kinds of crazy high-power builds get shown, will make customers more receptive to an electrified future for the Mustang. “Ford has made no secret of the fact that we are electrifying our most popular nameplates,” said Hau Thai-Tang, Ford’s chief product development and purchasing officer. 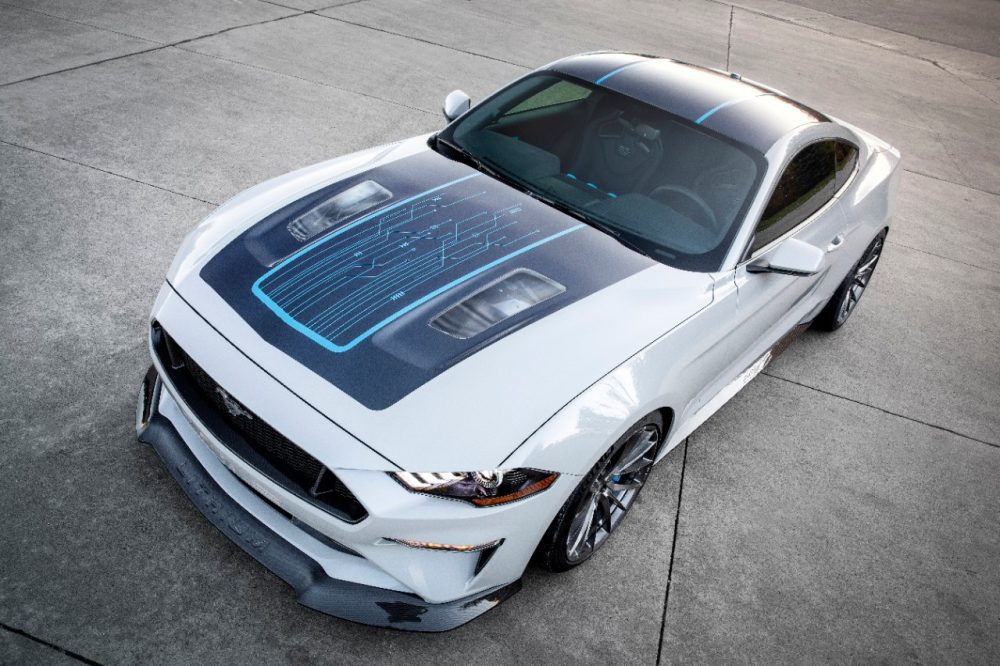 Ford says the Mustang Lithium has “lightning-quick performance that only fully electric powertrains can deliver” and “stunning quarter-mile acceleration.” Their press release did not state a quarter-mile time, but with 900 hp it must be fast. A stock Tesla Model S P100D, which has less horsepower and is likely heavier than Ford’s concept, can run a quarter-mile in the mid-10s.

Most interestingly, Ford has given the prototype a “drag-strip proven” manual 6-speed transmission. 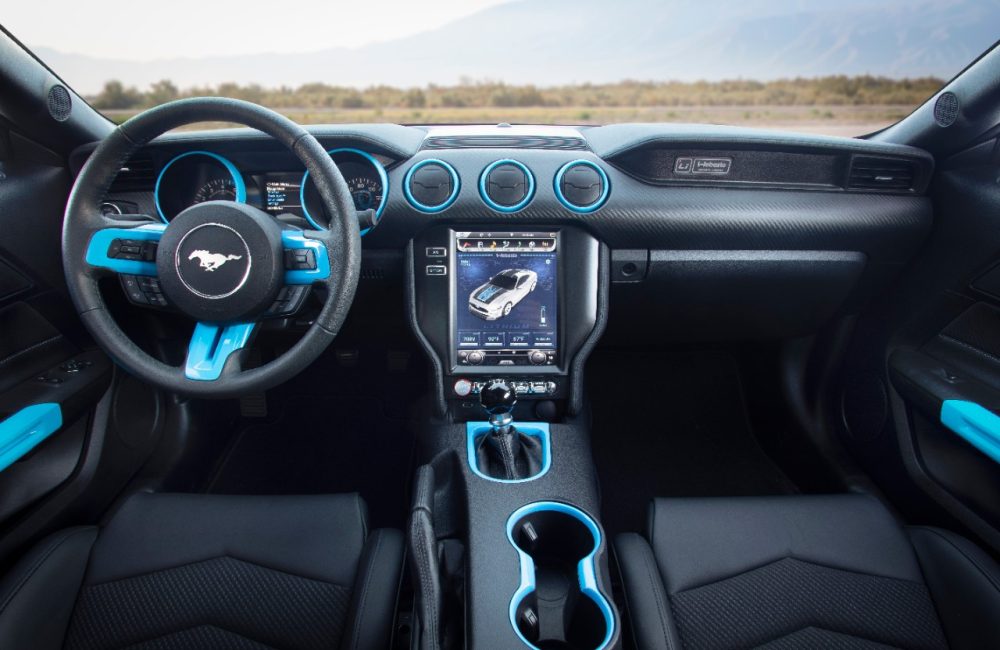 Hi, Ford. Can I please drive this car ASAP? Thanks.

Really though, this is a pleasant surprise. We thought for sure this would be some sort of plug-in hybrid Mustang, but going all-electric with one of the most recognizable sports car brands in the world is a big step. It’s been done before, but never as an official Ford project.

The disappointing part is that this is just a one-off, and isn’t going to be publicly available anytime soon, if ever. We had hoped that Ford’s announcement would be of a consumer-available plug-in Mustang of some sort, whether it be a hybrid or fully electric.

Instead, we get a one-off that is cooler than expected, but not available. It’s a bit sad, but then again, SEMA isn’t really the place for new vehicle announcements, but rather for interesting builds, so it stands to reason that we would just get a concept. Oh well.

Ford is refreshing their Mustang line for 2020, and a hybrid is expected to be part of the lineup. Many assume this will be a conventional hybrid without a plug, but perhaps given Ford’s recent big overtures toward electrification, we might get a plug after all.

Ford is planning to debut their “Mustang-inspired” Mach E electric SUV later this month. We don’t know if this will be the sole “electrified” entry into the Mustang line, or if Ford has more electrification to add to the Mustang.  We hope there will be more, at least.

And, Ford, please let me drive it.