A plug-in Mustang? What’s Ford got under wraps at SEMA?

The auto industry is gearing up for SEMA, its annual aftermarket expo, which starts tomorrow in Las Vegas. We’ve gotten an inside photo of Ford’s stage which suggests they’re planning to reveal a plug-in electric Mustang of some sort tomorrow morning when the show opens.

SEMA is a showcase of souped-up custom vehicles and draws a big presence from the hot rod crowd.  Major manufacturers often attend to show off their aftermarket parts lines and to feature custom vehicles and show car modders what can be done with their products.  Sometimes, manufacturers show off interesting new concepts, and it looks like Ford has a real doozy in store for us this year.

The photo, as can be seen above, features a Mustang-like vehicle under a cover on a stage, in front of a logo stating “Performance through electrification.”  On its own, this seems like it might just refer to a Mustang hybrid, which we’ve been expecting for a couple years now.

But next to the car there’s something particularly interesting: a J1772 electric car charging connector.  The charge connector doesn’t look like the Ford-branded charger they unveiled last month, but it’s obviously a J1772 connector.

Here’s a blown up and overexposed version of the photo showing a closer look at the charge connector, which is hard to see in the original photo above: 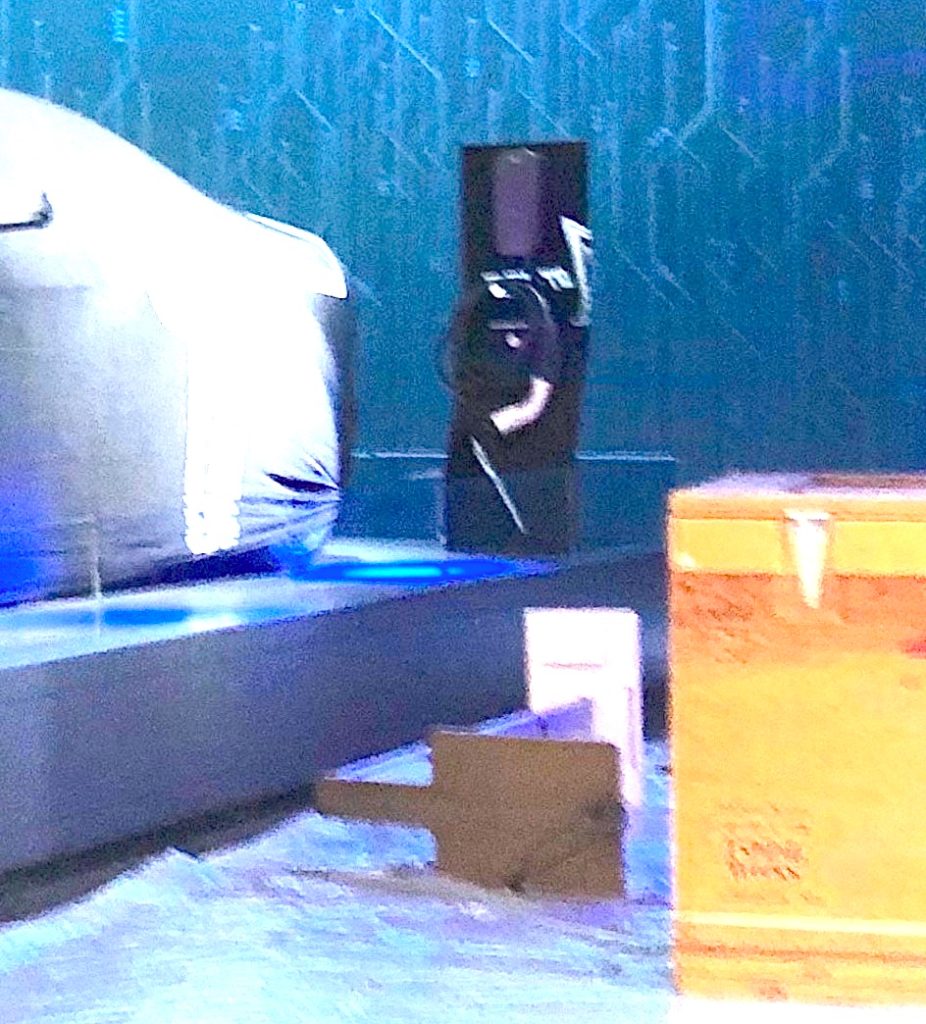 Ford did announce a future hybrid Mustang two years ago, but most assumed it would be a conventional hybrid, rather than a plug-in.  This photo suggests that Ford is getting ready to announce a Mustang which is at least a plug-in hybrid.

It’s possible the car could be fully electric, but we think that is unlikely.  We probably would have heard something more about it, or Ford would want to debut it at LA or Detroit auto show.

Our source did state that they didn’t see exhaust on the car.  But many cars recently have had exhaust pipes which are flush with the car’s body shape and thus wouldn’t stick out from under a car cover, so they could just be well-hidden.

Adding credence to the idea of the car being a plug-in hybrid rather than fully electric is the object on the left side of the photo that looks like a battery pack: 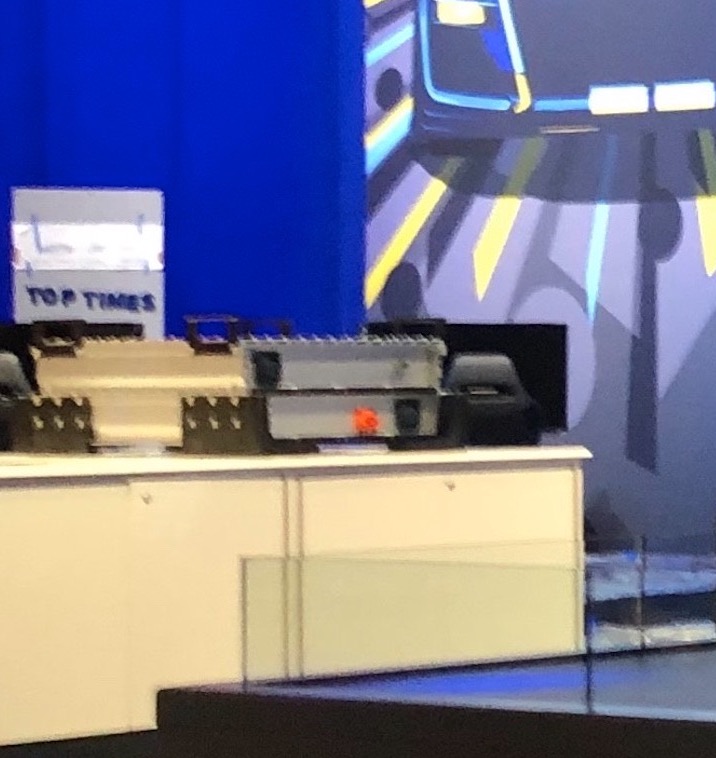 Our source says that the red and black plastics are definitely power terminals, and that the whole object is about the size of a conventional gas tank.  If that’s the case, then the car wouldn’t have enough energy storage to be fully electric, as batteries are significantly less energy dense than gasoline.

There have been other one-off Mustang electrification projects (like this super cool Mustang conversion shown at Goodwood this year), but this would mark the first “official” Ford entry into electrification of the Mustang.

This news comes just weeks before Ford is set to debut the Mach E, its “Mustang-inspired” electric crossover SUV on November 17, which the company is positioning as a Tesla Model Y competitor.

According to Ford’s recent union deal, “Mustang-derivatives” will all be built in their Flat Rock assembly plant.  This is the same plant where Ford originally said their hybrid Mustang would be built, when they first announced it in 2017.

Since then, we figured that rumors of an electric Mustang mostly referred to the Mach E, but it looks like Ford is doing more than we thought they were.

It’s also clear from the photo that the Mustang at SEMA is not the Mach E, because the Mach E will have a much higher rear end than the Mustang on the stage.  It looks like just a regular Mustang profile, but next to an EV charger.  Besides, Ford isn’t showing the Mach E for another couple weeks.

The Mustang is under a cover, so we can’t see specifics as to whether there are any design differences, but the cover gives us another big hint: the word “Shelby” and a picture of a cobra.

Shelby is the designation that Ford gives to its highest-performance vehicles.  This designation is named after Carroll Shelby, the famous racer who led Ford in their racing campaign against Ferrari in the 60s, in a car called the AC/Shelby Cobra.  Shelby will be played by Matt Damon in the upcoming movie Ford vs. Ferrari which tells this story.

Ford has also referenced this battle in communications regarding their upcoming performance EV projects, which they say will “go like hell.”  This is the phrase Henry Ford II, then-President of Ford, told his racing drivers.

So if Ford is lending the name “Shelby” to this new electrified Mustang, it’s gonna have to be fast.

We know nothing about specs yet, though the hints above suggest that it will have to be performance-oriented and will probably be placed at the upper end of the vehicle line in terms of price.  And with the Shelby Cobra designation, perhaps it will function as a halo car for the whole vehicle line.  While the starting price of a Mustang is around $26k, the price of a Shelby Mustang GT350 starts at nearly $60k.

SEMA opens tomorrow at 9am Pacific time, and hopefully we’ll manage to get some communications from Ford about this vehicle then.  Stay tuned.