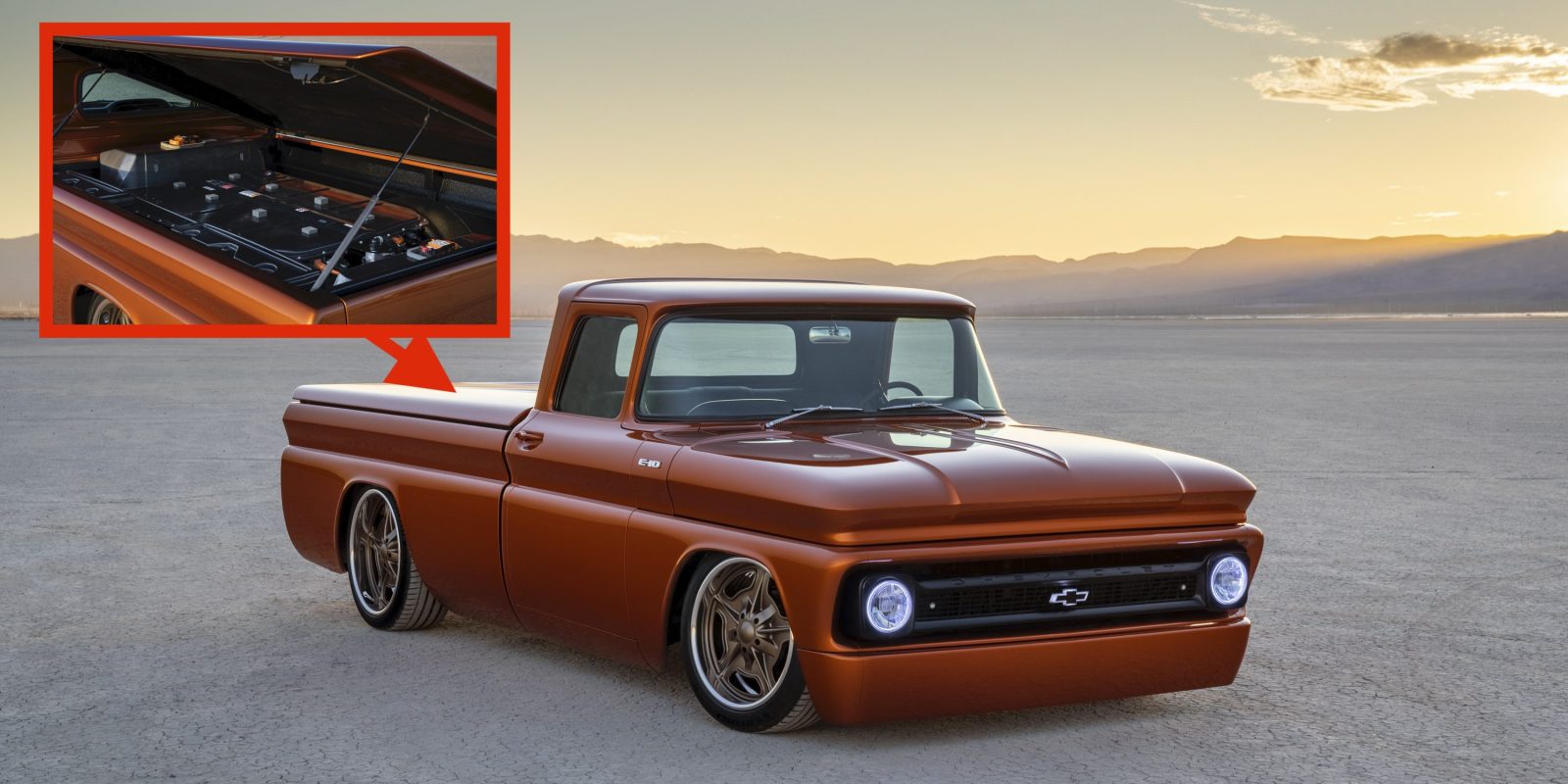 At Sema in Las Vegas today, GM has unveiled a new electric pickup hot rod concept based on the Bolt EV. The automaker says that the concept demonstrates “electric conversion possibilities for classic vehicles, blending vintage styling and high performance with zero-emissions driving.”

GM says that they wanted to develop a “Connect & Cruise concept crate propulsion package” to install in the vehicle.

It basically consists of two Chevy Bolt EV powertrains mounted in the bed of the truck:

The E-10’s Connect & Cruise concept propulsion system is composed of a double stack of Chevrolet Performance concept electric crate motors (eCrate), two 400-volt batteries and a conventional SuperMatic™ 4L75-E automatic transmission. The double stack eCrate motor replaces the truck’s original gas engine under the hood and is connected to the automatic transmission, which transfers torque to the rear axle. Power to the drive stack comes from the pair of independent Chevrolet Bolt EV power electronics and two production Bolt EV battery packs. Mounted in the truck’s bed, each offers 60 kWh of usable energy under a hard tonneau cover.

Jim Campbell, vice president of Performance and Motorsports, commented on the concept:

The Chevrolet E-10 electrified Connect & Cruise concept system reimagines the performance crate engine for hot rodders. As General Motors continues to work toward our vision of a zero-emissions world, concepts such as this help us get there, while still supporting the enthusiasts who love to drive vintage vehicles.

General Motors has the in-house talent required to create a concept like the E-10. With the innovative thinking and expertise our performance team, electrification team, and many others at GM bring, this project went from concept to running vehicle in 18 weeks to demonstrate what the future of an eCrate propulsion system and hot rodding could look like.

The new electric powertrain results in “an estimated 450 horsepower to the rear wheels,” and GM says that the concept can deliver “0-60 mph times of around 5 seconds; and quarter-mile times in the high 13-second range.”

Russ O’Blenes, director of Performance Variants, Parts & Motorsports, commented on using the new electric “eCrate” with production component in a hot-rodding project like this one:

We designed this system to deliver both power and range. The exciting part is that we’re just getting started. Just as we have done over the years with our performance crate engines, we will continue to refine and improve electric propulsion Connect & Cruise concept systems. Our goal is to provide greater power with greater range, suiting the different needs and priorities of all types of enthusiasts. In this case, we will use higher current and voltage-capable inverters, batteries, and related components rather than carburetors and cylinder heads.

While the vehicle is all-electric, don’t be surprised if you hear the sound of an engine roaring when it is on the drag race track.

The Chevrolet E-10 Concept is equipped with a sound emulator and three speakers to “simulate an induction sound in the front and two banks of a V8 engine.”