KYMCO announces RevoNex electric maxi scooter — or is it an electric motorcycle?

And based on KYMCO’s announcement just hours ago, this year, the company plans to return with another powerful electric two-wheeler known as the KYMCO RevoNex.

KYMCO only released a single teaser drawing, shown below, which features a rear quarter view of the RevoNex.

And despite describing the RevoNex as a maxi scooter, the bike certainly gives off more of an electric motorcycle vibe to me. With its faux gas tank, near lack of a step-through design, large wheels, and sportbike-style pillion pegs, KYMCO appears to be playing fast and loose with the term “maxi scooter.” 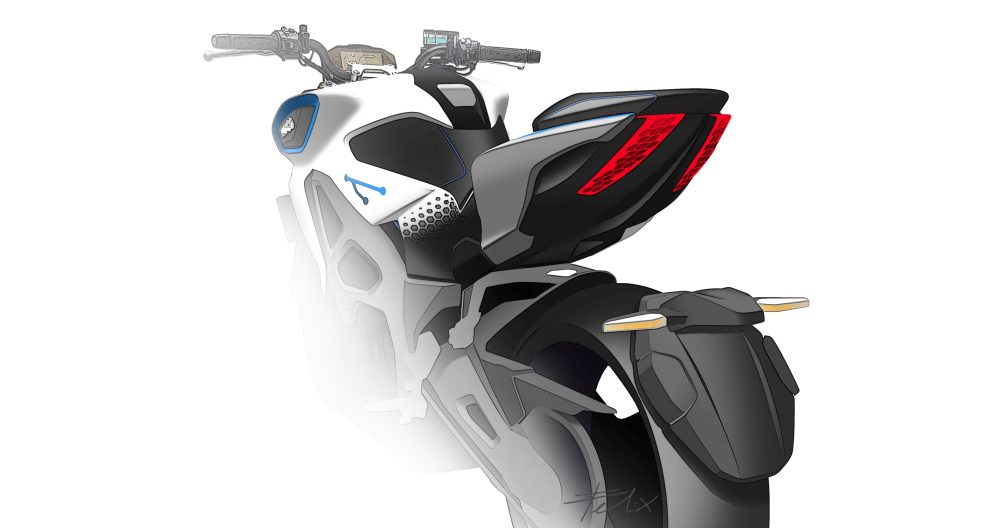 Maxi scooters are generally defined as a class of automatic transmissions scooters featuring larger engines and capable of higher speeds. This often means a shift toward larger wheels to safely and comfortably accommodate those speeds, as well as an increase in standover height to accommodate larger motors (or larger batteries, in the case of electric scooters, which have physically smaller electric motors). So in a way, maxi scooters are already encroaching upon motorcycle territory. But this seems more like hopping the fence to me.

To be fair, there aren’t very many electric maxi scooters on the market yet for comparison. The best examples are currently the BMW C Evolution and the Silence S01.

The BMW C Evolution is a high-power maxi scooter, packing a 35 kW (48 hp) motor putting out 72 Nm (53 lb-ft) of torque. It has a max speed of 129 km/h (80 mph) and includes a BMW i-series battery with 12.7 kWh of capacity. That gives the scooter a range of 159 km (99 miles). Those specs put it in a similar performance class as a Zero FXS electric motorcycle, though with a bit more range than the Zero.

The Silence S01 has a smaller 11 kW peak rear hub motor and a max speed of 100 km/h (62 mph). The scooter’s novel trolley-style 5 kWh rolling batteries offer a maximum range of 115 km (71 miles), though likely at a slower average speed.

We don’t yet have any specs on the KYMCO RevoNex, so it’s hard to say how it will compare to the few existing electric maxi scooter options on the market.

Between the two, the Silence S01’s price of around US $7,000 is certainly more enticing than the BMW C Evolution’s price of approximately US $14,000. But KYMCO’s production capacity and Taiwanese manufacturing advantage could help the RevoNex severely undercut both of those competitors.

It’s also hard to say if and when you’ll be able to buy a RevoNex, since KYMCO has a bit of a habit of unveiling new electric vehicles and then dragging its feet on bringing them to market.

So while the RevoNex looks like a very attractive addition to the market, I’m looking forward to seeing them out on the road more than on the EICMA show floor.