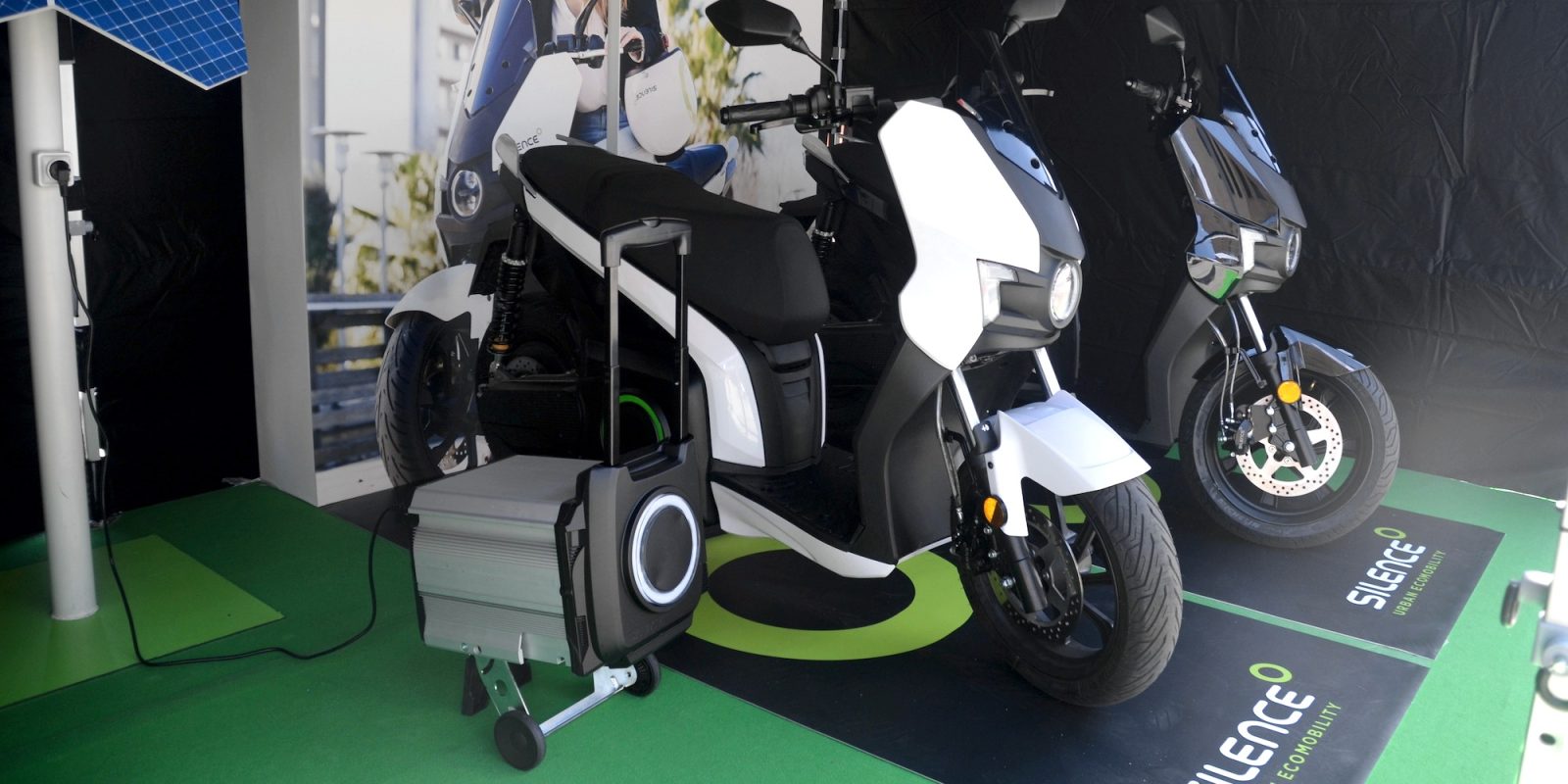 The 100th anniversary of the Barcelona International Motor Show is currently underway, and automakers from every corner of the planet are in attendance. Fortunately for Barcelona-based electric scooter company Silence, they didn’t have to travel far. This year they brought Electrek out to see their newest consumer electric scooter in the flesh, the Silence S01. And I must say, this is one slick scooter that will have you wondering why you even need a car anymore.

I also got a chance to sit down with CEO Carlos Sotelo to learn more about what Silence is currently working on. And I was not disappointed; there are some exciting new products coming down the pike. Read on to learn more.

We previously covered the beginning of pre-sales for the S01 scooter. If you saw that article then you are likely familiar with what makes Silence’s scooter so unique: its removable wheeled battery. While most electric scooters have limited battery capacity due to heavy removable batteries, the S01 has 2-3x the capacity of the competition – up to 5.5 kWh. 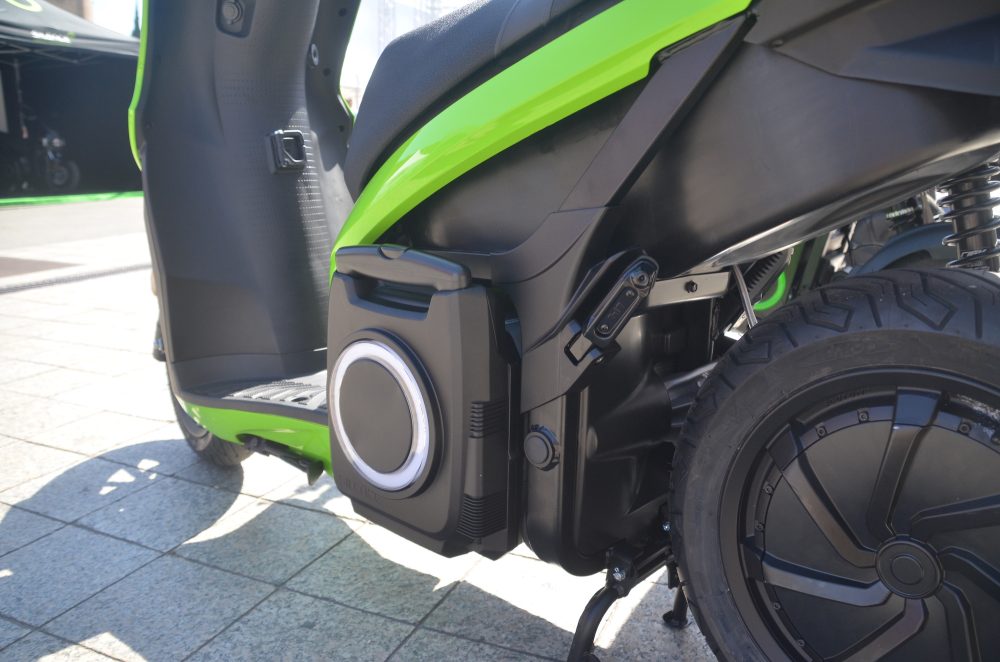 To stuff that much battery into a scooter and keep it removable (and manageable), Silence designed in an ingenious rolling trolley system. The battery has a telescoping handle, similar to a piece of rolling luggage.

When the user releases the battery latch on the scooter, wheels drop down from the battery and it slides out the side of the scooter. From there, the user can simply roll the battery around, take it inside to charge, or even use it to power devices off-grid with an optional 220V AC inverter attachment.

Check out the video below to see the removable battery in action, and also to check out my behind the scenes peek at Silence’s local factory.

While most electric scooters in Europe and Asia fall into the 50cc class with speeds up to 45 km/h, the Silence S01 is designed to be more versatile. It reaches a top speed of 100 km/h (62 mph) and a range of up to 115 km (71 mi). Power comes from a 6 kW continuous, 11 kW peak rear hub motor mounted in a single-sided swingarm.

I got the chance to ride the S01 electric scooter as well as the three-wheeled tilting version, the S03. The power in these scooters blew me away. Forget 50cc scooters, the Silence S01 is more like a 125cc class scooter but with 250cc acceleration. When you put it in the highest performance mode and punch it, the scooter simply takes off. There’s no lag, you’re just holding on while grinning ear to ear as you silently speed away. The hydraulic disc brakes include a combined braking system for safety, giving you as much stop as you have go. 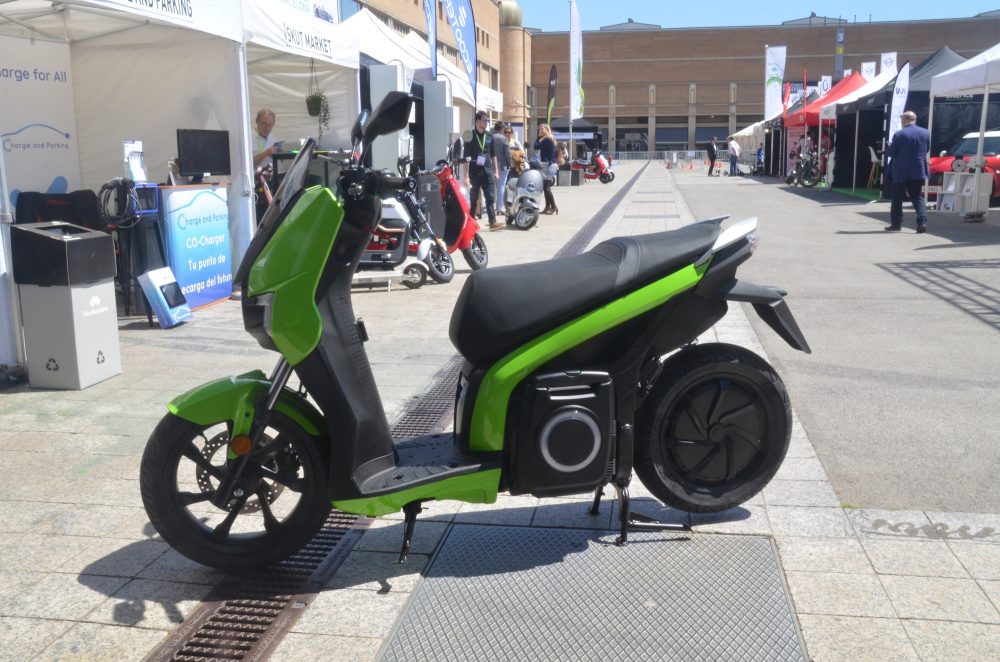 Fortunately, Barcelona is not without its fair share of cobblestone streets, giving me a great chance to test out the suspension. The damping in the front hydraulic fork and rear offset monoshock are on point! I was probably going faster than I should have been on those kinds of surfaces, but it was still comfortable. Not smooth-street comfortable, but much better than many other electric scooters I’ve tried with cheaper suspension.

I was also impressed with the storage on the scooter. Most electric scooters offer either big batteries or large under seat storage. Very few can do both. But the Silence S01 manages to offer enough under-seat storage for two 3/4 helmets while still having one of the largest batteries in the industry – if not the largest.

The S03, Silence’s three-wheeled version of the scooter, was also a hoot to ride. It is weird not having to put your feet down when you come to a stop. The titling feature means that the scooter rides and feels just like a two-wheeled scooter, yet offers the hauling capacity (and convenience) of a three-wheeled scooter. It isn’t much wider either, considering the handlebars and mirrors are already the widest point on most scooters. Plus, the S03 is designed as a cargo vehicle, so the dual rear wheels give more room for a large cargo box to be added to the rear.

Check the video above to see part of Silence’s presentation of the scooters from the Barcelona International Motor Show. And for those of you who are citizens of the internet, you’ll be happy to see that the demo scooter was named “Bikey McBikeface” in the application demonstration. 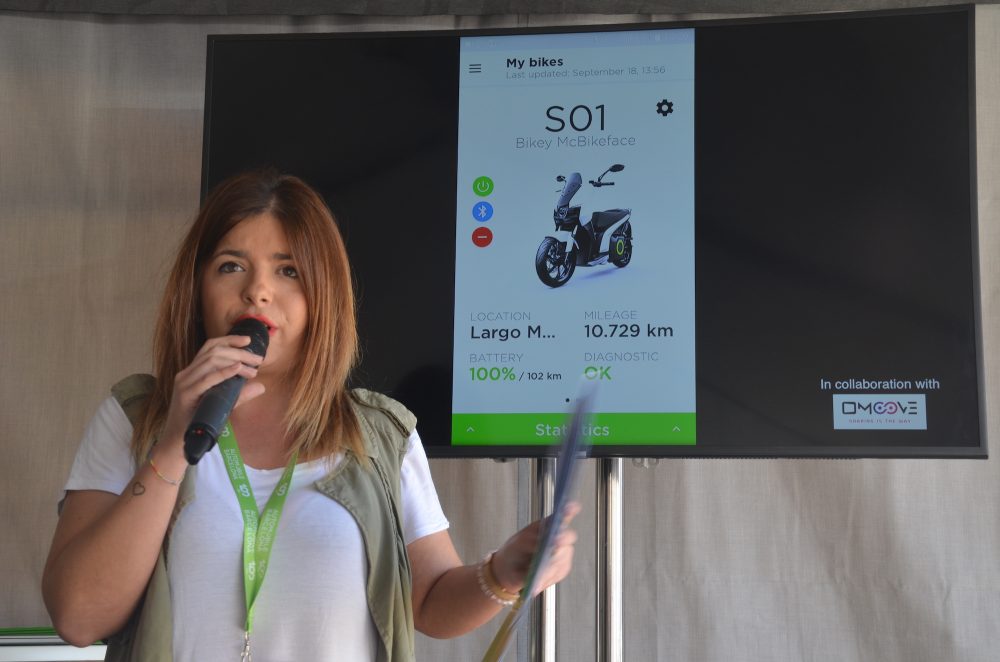 While in Barcelona, I got the chance to check out Silence’s factory and see the assembly line at work.

Silence prides itself on the company’s local design and production, which makes a big difference when compared with cheaper imported scooters. With a local factory and skilled workers, Silence has 100% oversight and can maintain the highest quality control standards – which is important when producing scooters at Silence’s rate. 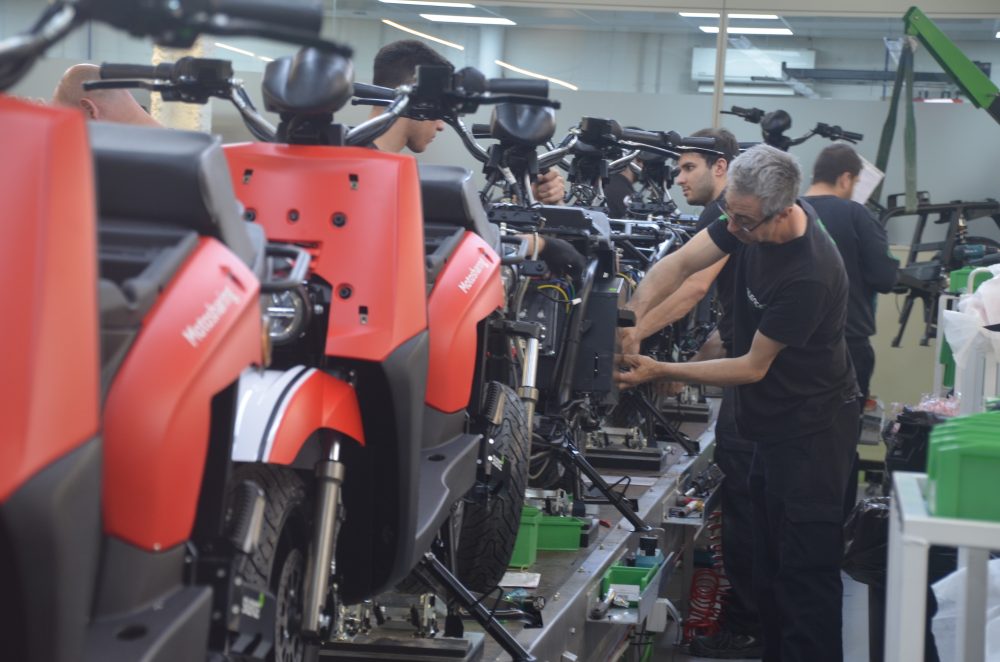 Last year the company produced around 3,000 electric scooters. That was pretty good for an electric scooter startup in Europe, but Silence is already blowing past that number this year. They are expecting to produce at least 8,000 electric scooters in 2019, and perhaps many more. They are currently negotiating deals with many commercial partners which could result in more large orders. They are also trying to hire enough skilled workers to increase production and add more shifts to keep the factory open longer during the day.

Last year, scooters were rolling off the line every 30-40 minutes. Now a new scooter is produced nearly every 8 minutes. Just while walking around the factory floor for 30 minutes, I saw the line shift forward and 3 new scooters pop out the other end. And they weren’t even operating at maximum capacity yet.

And with the success of their scooters combined with the increase in production, Silence is now receiving partnership offers from all over the world. While they’ve already begun locally with thousands of electric scooters in use by scooter sharing companies like Scoot and Acciona, and racked up over 14 million kilometers (8 million miles) of testing, Silence is receiving offers and inquiries from other international companies including Lime and Bird. And while Silence doesn’t currently have plans in place for expansion to North America, they are very interested in the prospect.

“We are always looking for the right partner to come along and help bring our scooters to more countries. It requires the right team with local knowledge as well as the ability to support our scooters in the country. We are mainly expanding now into France, Italy, Germany and the UK, but have recently found a partner in Luxembourg where we are opening out second flagship store – the first outside of Barcelona.”

I asked Carlos if he feels any competition from the growing number of electric scooters in Europe, both from locally produced models and imported Asian scooters. Surprisingly, he explained how he welcomes such scooters and doesn’t feel that they are competition – at least not yet. For one thing, most imported Asian electric scooters are 45 km/h (28 mph) moped-style bikes that can’t match the long range, high speed, or premium build quality of the Silence S01. But even among the longer range and higher quality European designs, such as Piaggio’s Vespa Elettrica scooter, Carlos wants to see them succeed: 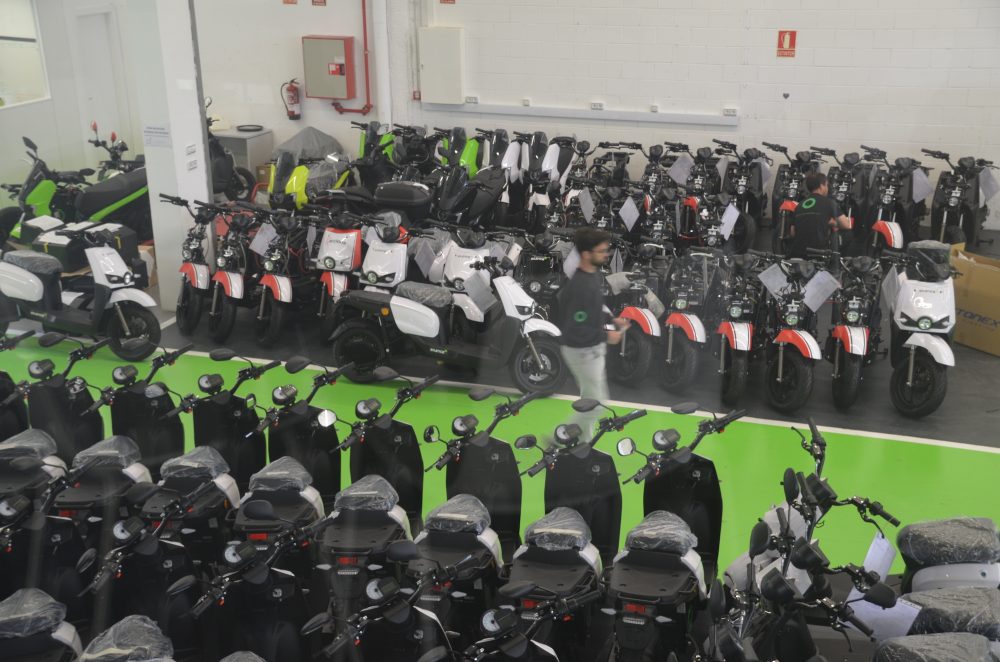 What’s coming next? Hint, it has four wheels…

But Silence isn’t ready to simply rest on its success so far. The company is hard at work on new developments.

“We’re expecting two new announcements every 6 months for the next few years, based on our current rate of development. That’s including updates to our existing scooter line and brand new products.”

And while I couldn’t get too many details on the upcoming new product lines, I was able to get a sneak peek at what will likely be the biggest announcement next year – a four-wheeled vehicle. What will likely become the S04 is designed as an enclosed four-wheeled quadracycle. These types of small vehicles can still carry two passengers, but use much less energy, require less room to park, and make more efficient use of available streets.

Silence’s four-wheeler will likely use its own high capacity removable batteries, meaning you could park your “car” on the street and then potentially wheel your battery inside for charging in your apartment. 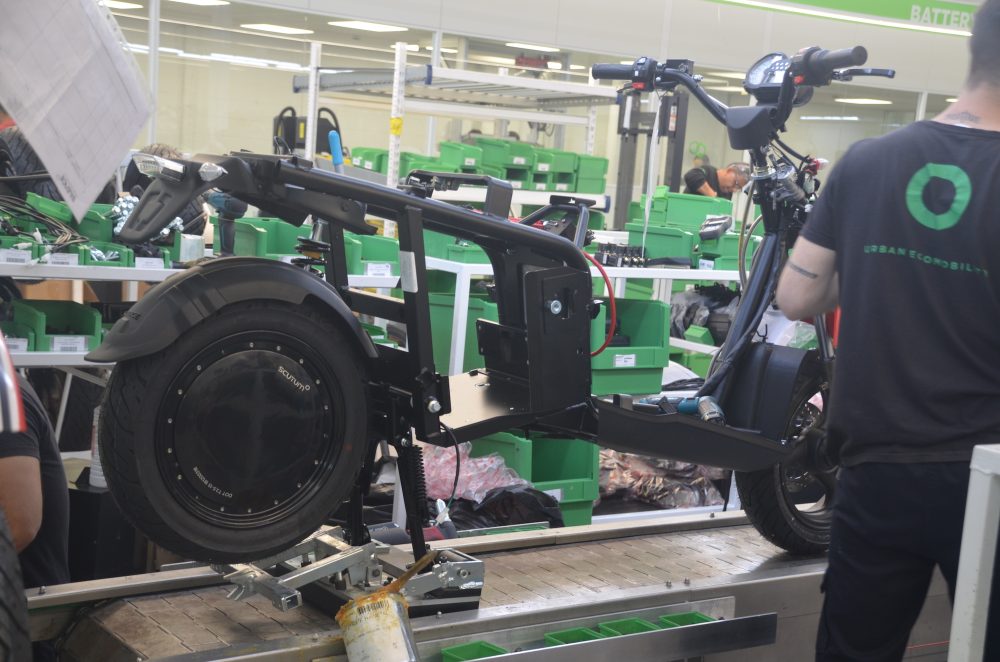 I wasn’t permitted to take photos of the prototype as it is still under development. And there’s no guarantee that it will see the light of day, as it is still in the early project stage. Sitting inside, I was able to buckle into a standard seat belt and I felt more or less like I was in a real car – except that I could have opened the doors and touched all four wheels without leaving the driver’s seat.

Silence seems to be expanding at breakneck speed. With a number of new products on the way and a string of recent announcements about partnerships and production milestones, I expect to see some very cool new things coming out of Barcelona soon.

What do you think of Silence’s electric scooters? Let us know in the comments below.