KYMCO, the largest motorcycle and scooter company in Taiwan, has set its sights on producing electric scooters and a compatible network of battery swap stations, plus a new standard of universal removable and swappable batteries.

As part of the first step to achieving their goal, KYMCO just unveiled their two new electric scooters lines.

The new KYMCO scooters are part of the company’s Ionex line of EVs and are being marketed locally as the New Many 110 EV and Nice 100 EV.

The Nice 100 EV is slightly more muted, reaching 45 km/h (28 mph) but with a similar range, and will be available in October for approximately $1,430 USD after local subsidies.

Neither of these are speedsters – they’re city commuters. 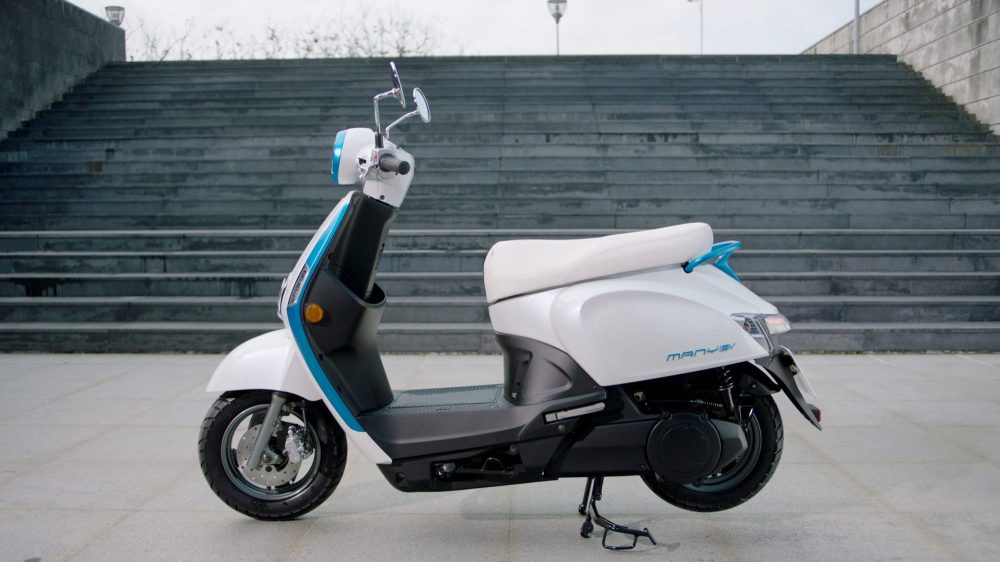 The scooter’s have a typical European Vespa-style step through design and specs that are fairly standard, though not remarkable by themselves.

What makes this announcement by KYMCO special is the planned charging infrastructure that will accompany their new electric scooters.

Both scooters will have a small built-in battery for auxiliary and backup power, and will draw their main power from two removable batteries.

Customers would buy the KYMCO electric scooters but not the batteries, instead just leasing the batteries and/or renting batteries from the battery stations for around $10 USD per month.

Battery swapping and/or charging would take place in KYMCO’s battery stations, which are essentially battery vending machines that charge batteries to prepare them for riders. 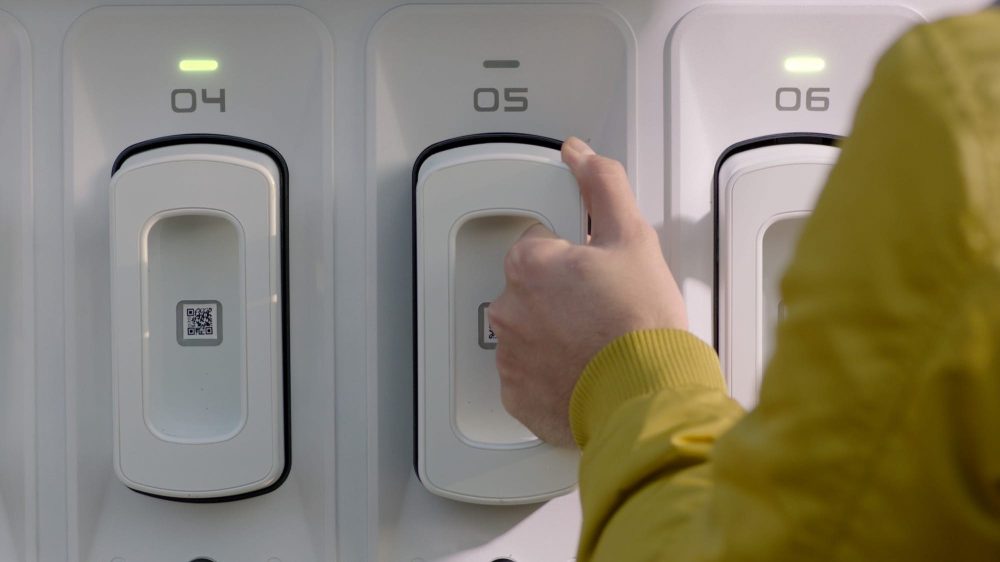 This puts KYMCO in direct competition with Gogoro, another Taiwanese electric scooter maker that has already deployed battery swap stations for its swappable battery scooters. The KYMCO stations aren’t exactly the same as Gogoro’s, as the currently KYMCO model user charges their own battery instead of swapping for a fresh one like Gogoro’s. But with a simple shift in policy, KYMCO battery charge stations could easily function similar to Gogoro’s.

By comparison, Gogoro is a much smaller company than KYMCO. Compared to the over 500,000 vehicles sold by KYMCO last year, Gogoro sold only 34,000. In Taiwan alone, KYMCO has the largest marketshare, while Gogoro sits in 4th place with only 7.3%.

However, the vast majority of KYMCO’s sales have been gas scooters. While they have a few small models of electric two-wheelers designed for the Asian market, this marks their first large scale entry into the electric scooter industry.

Plus, Gogoro’s marketshare increased by over 15% from just March to April of this year, an indication of the company’s quick growth and a clear threat to the much larger KYMCO. Gogoro has even expanded internationally, partnering with ‘Coup’ in Berlin to operate a similar scooter rental program in the city.

According to Gogoro, over 60,000 riders have swapped around 10 million batteries in their swap stations in the last 3 years.

In order to compete with Gogoro, KYMCO is taking a slightly different approach. Their battery stations will also offer traditional charge points that will be open to scooters from other manufacturers as well – an option that Gogoro does not currently support. 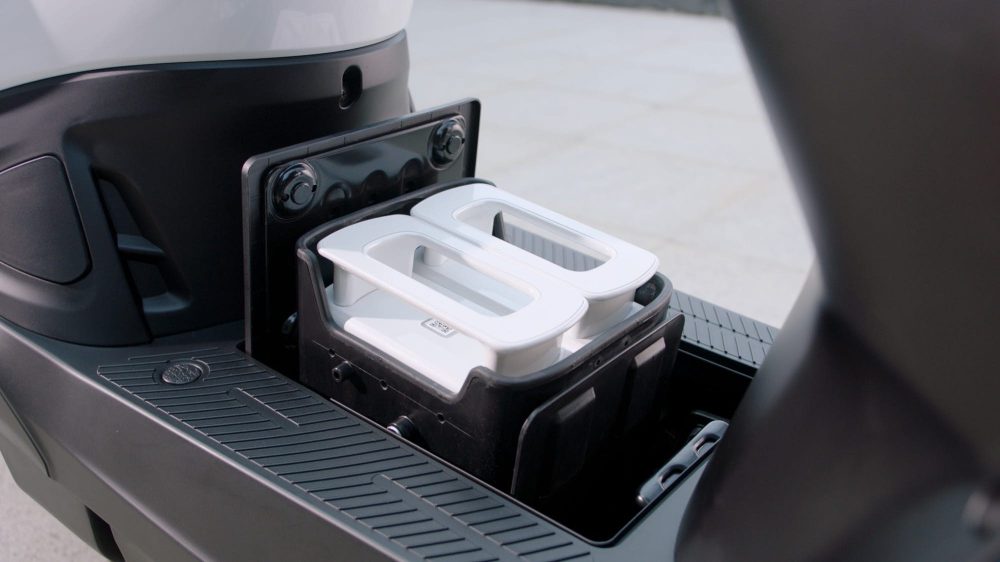 Going even further, KYMCO has also offered the possibility of allowing other scooter and EV manufacturers to design around their batteries, which could make them one of the first universal removable battery standards in the world.

KYMCO believes that this removable battery approach can help them catch up in the EV marketplace and become a dominant player just like they have done in the gas scooter industry. The company already plans to increase their EV product line dramatically as they expand operations.

According to KYMCO chairman Allen Ko:

“In the next three years, KYMCO plans to launch 10 electric models, establish charge networks in 20 countries, and sell over half a million electric vehicles worldwide. With the Ionex, together we start an open movement that celebrates one of the most important social missions of our time.”

With the first KYMCO Ionex scooters hitting the streets later this year, time will tell if they can compete with the already established Gogoro network and whether other manufacturers will sign on to their swappable battery program.

The scooters are nice, I’d ride one. But that’s not what’s important here.

What’s important are the batteries.

Removable and swappable batteries make a ton of sense for scooters, which have limited space on board to bump up their range. But if you could pull into a battery station and charge or trade your batteries from a battery vending machine in just a few seconds, well then frankly that would be huge.

But even more importantly, by creating a removable battery standard, KYMCO could be pushing the industry towards more universal battery swapping programs. Instead of having to find the “right” battery swap stations just like you used to have to find the “right” cell phone charger, the same batteries could be used in a variety of electric scooters, motorcycles, bicycles, and NEVs.

Heck, you could even toss a dozen or so in a car for some decent city-range.

Unfortunately, KYMCO has been tight lipped on the exact specs of their batteries, including total capacity, but other swappable scooter batteries have been around the 1.5 kWh mark. Too much larger than that and the batteries get fairly heavy and unwieldy for smaller users.

I actually have a fairly large amount of experience in building Li-ion battery packs, having written the book on the subject. To me, based on the size of the packs in publicity photos and their reported weight (5 kg or 11 lbs), I don’t expect these swappable packs to be much larger than 1 kWh.

But with more details expected to come soon and the first scooters to be available in August, I’m looking forward to seeing how this technology shapes up. With KYMCO’s large size and worldwide dealer network, they could certainly lead the industry in a new direction.

What do you think about a swappable battery standard? Let us know in the comments below.