BMW’s C Evolution electric scooter is one of the largest, fastest and longest range electric scooters on the market. And now it seems that the scooter might be getting a safety bump in the form of a covered passenger cell.

At least that’s how it appears in a German BMW patent for the C Evolution electric scooter.

The patent shows a BMW C Evolution paired with a passenger cell featuring a roof, backrest and even a seatbelt.

BMW C Evolution could be getting a roll cage of sorts

The passenger cell is modular in design, meaning it could likely be offered as an option to be swapped onto the current scooter model. If BMW actually explores a semi-enclosed electric scooter further, that is.

The design basically creates a roll cage that is built into the electric scooter. A full seat and harness keep the rider strapped in. During a slide, the rider would be protected from the road and potentially from impacting other objects – at least depending on the speed.

The BMW C Evolution is a powerful maxiscooter, featuring a 35 kW (48 hp) motor that outputs 72 Nm (53 lb-ft) of torque. It can reach a top speed of 129 km/h (80 mph). It features a BMW i-series battery with 12.7 kWh of capacity which provides 159 km (99 miles) of range. Those specs put it in a similar performance class as a Zero FXS electric motorcycle, though with a bit more range. 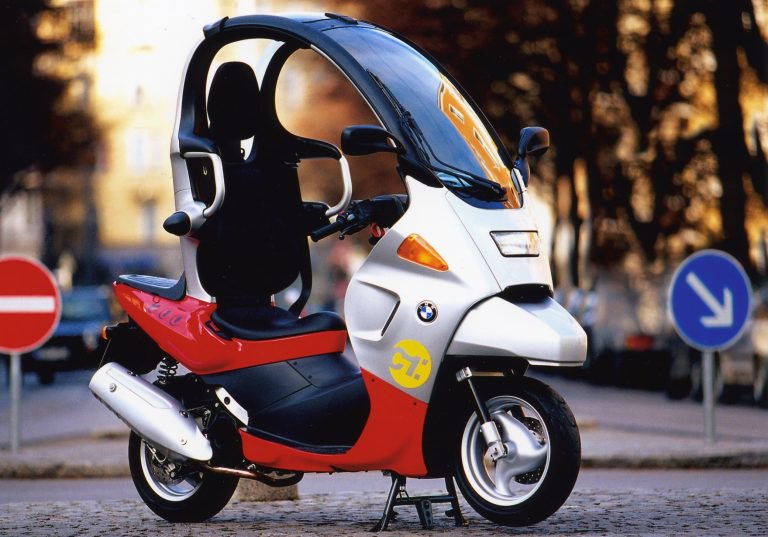 BMW’s turn of the millennium take on a covered scooter, the C1

Will Germany actually build and market the new BMW C Evolution passenger cell? Maybe, maybe not. Covered scooters haven’t had a huge market in the past, but perhaps the electric drive combined with the added safety will be enough to woo riders this time. 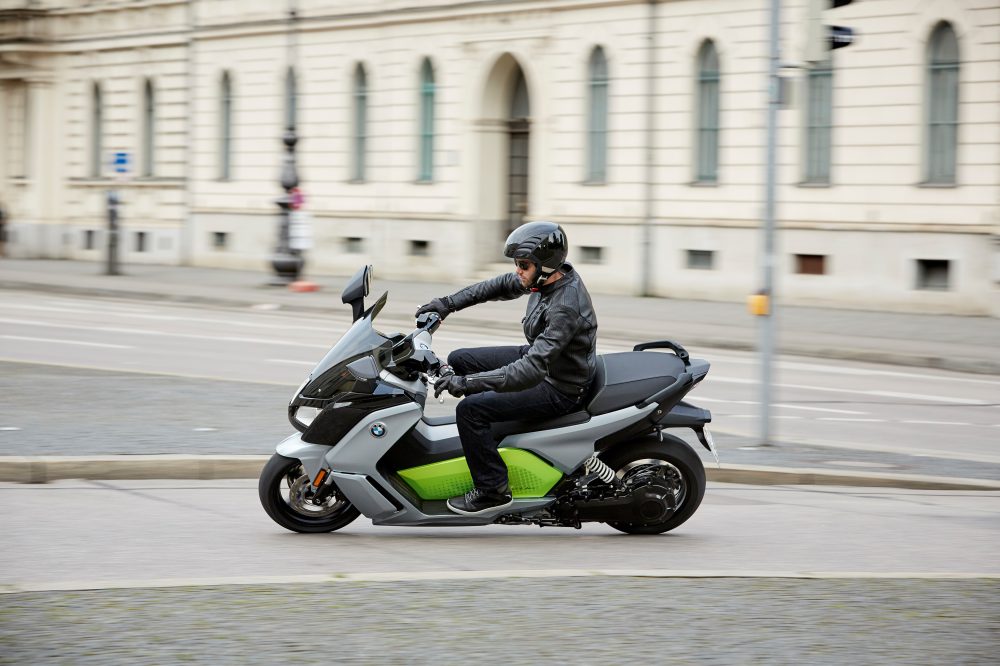 Well, it’s interesting to say the least. BMW is really branching out into some interesting scooter territory lately.

You can’t deny the safety aspect of it. If you were to slide on a normal scooter, you’d be in for a bad time. But with the passenger cell on the C Evolution, you could be strapped in and sliding sideways, completely protected from impacting other objects.

Sliding along the pavement in a roll cage is something I actually have experience in. During engineering school I used to do unsanctioned DIY soap box car racing. All of our cars were basically welded out of bike parts and reclaimed steel from dumpster diving. I was one of the few to build in a roll cage. My car got rolled in a collision and I skidded on my side for about 50 feet of pavement. Between the roll cage and the 4-point harness (the only non-DIY part of the car), I escaped with only a scratch on my wrist from it hitting the pavement. These roll cages or passenger cells really do keep you nicely cocooned and prevent you from being dragged across the road like cheese on a grater.

The problem is that while they do add to safety, they are designed to get otherwise non-riders onto scooters. And part of the danger of scooters is new riders who aren’t accustomed to them or aren’t confident enough to ride them. By lowering the bar too much, you may give people too much undeserved confidence and allow them to get themselves into sticky situations. And as good as a passenger cell is at keeping you in the scooter during a slide, you can still get injured in a high speed crash with a car or other solid object. You don’t want to get T-boned in this thing any more than on a regular scooter.

So while I like the safety addition, I think it is important to remember what it can do and what it can’t.