The original prototype immediately won praise and awards after its unveiling in 2018.

Ever since, Curtiss has rolled out a series of updates and design changes to tweak the bike before it heads to full production.

Late last year the company divided the electric motorcycle world with the introduction of their V8 battery concept. While some praised the visually striking design, others derided the throwback to the dying gas-powered motorcycle era.

But the naysayers haven’t stopped Curtiss, who is now charging forward with the V8 battery design. The company’s latest update to the Zeus electric motorcycle shows the flared, cylindrical battery cases in the iconic V8 style. 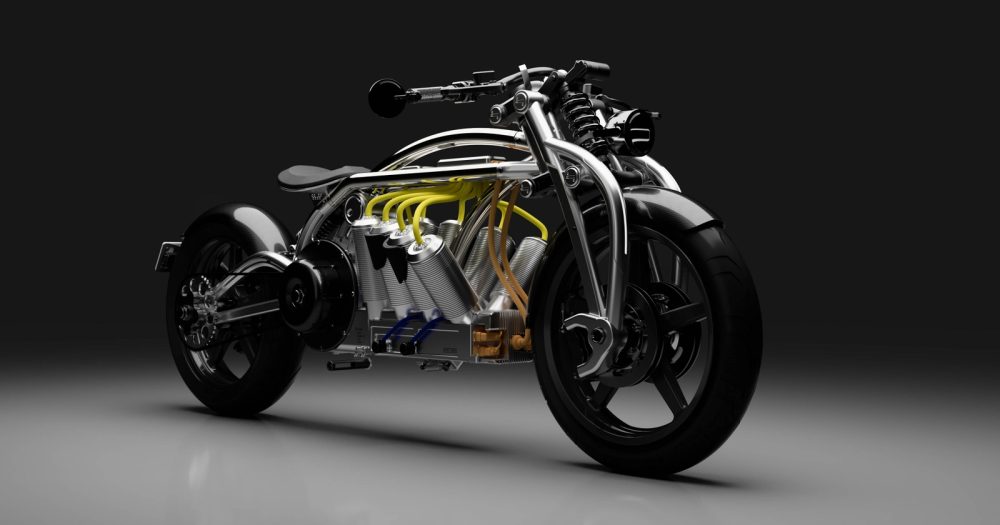 “With the battery cells packaged inside eight cylindrical towers configured in a flaring radial ‘V’ pattern, we’re not only able to tap into Glenn’s iconic V8 form language, but we’re also able to achieve maximum battery cooling efficiency. In this case, there exists no compromise between form and function.”

Those eight cylinders hold 16.8 kWh of battery, which is more capacity than most other electric motorcycles. Without accessory or add-on packs, Zero’s largest battery currently tips the scales at 14.4 kWh.

Curtiss was originally using motors from Zero in a dual motor setup on the Zeus, but ultimately switched to a proprietary Yasa P400 R series motor.

The Curtiss Zeus V8 is slated to enter production next year. It won’t come cheap though, with a current price of $75,000. You could buy two Harley-Davidson LiveWire electric motorcycles for that price and still have enough left over to pick up a 150 mph (241 km/h) Lightning Strike electric motorcycle.

The Zeus may sound expensive… and it is. But at least you’ll be getting an extremely unique bike for that cash. The front suspension is an eye-catching aluminum girder fork, the chassis is a hand welded titanium/chromoly tubular frame with machined 6061 aluminum fusion and the wheels are carbon fiber.

Is all of that strictly necessary? Of course not.

But the Zeus is an extremely powerful rolling work of art with high performance to match the high price. If you’re looking for a urban runaround, this isn’t the bike for you.

If you’re looking for a status symbol that actually comes with some pretty insane engineering and electronics, not to mention enough power and torque to peel the rubber off your tire, the Zeus might be for you.

I know that I’ll never be able to own a bike like this, but I still love that it exists. I’m holding out hope that I’ll get to try one someday. If that ever happens, I’ll take all of you Electrek readers along with me for a first ride report!