Curtiss Motorcycles presented its new dual motor Zeus electric motorcycle concept for the first time publicly this week at the 2018 Quail Motorcycle Gathering in Carmel, California. In addition to winning the attention of the thousands in attendance at the 10th annual meet, the powerful electric motorcycle quickly secured the coveted “Most Innovative Motorcycle” award as well.

In an Electrek exclusive interview, director of design at Curtiss Motorcycles Jordan Cornille shared more information with us about the impressive new Zeus electric motorcycle concept.

With standard ICE motorcycles, designing around a gas tank and large engine leave very little room for innovation and creativity. While electric motorcycles are becoming more popular, many have failed to push the design envelope very far, often retaining much of the conventional motorcycle aesthetic with mock gas tanks and conventional frame geometries.

What we were really trying to do at Curtiss is redefine the American motorcycle, and so with this new electric technology we didn’t have any limitations on what a motorcycle needed to be, so we were able to completely rethink the packaging of the motorcycle and invent an all new genre.

As reported by EVNerds, The Zeus’s chassis is machined billet aluminum, opting for bolted members over welding. The rear suspension uses a center-line cantilever mono-shock, and the front suspension uses a four-link girder mono-shock. Together, each of these pieces of the puzzle combine to give the Zeus a one-of-a-kind, futuristic look that is unapologetically different from anything a motorcycle has ever looked like before.

Under the hood, so to speak, is where things get even more innovative. In a partnership with Zero electric motorcycles, Curtiss has developed the all new Curtiss E-twin platform, consisting of two Zero electric motors coupled with a single output shaft and capable of twice the power and torque. 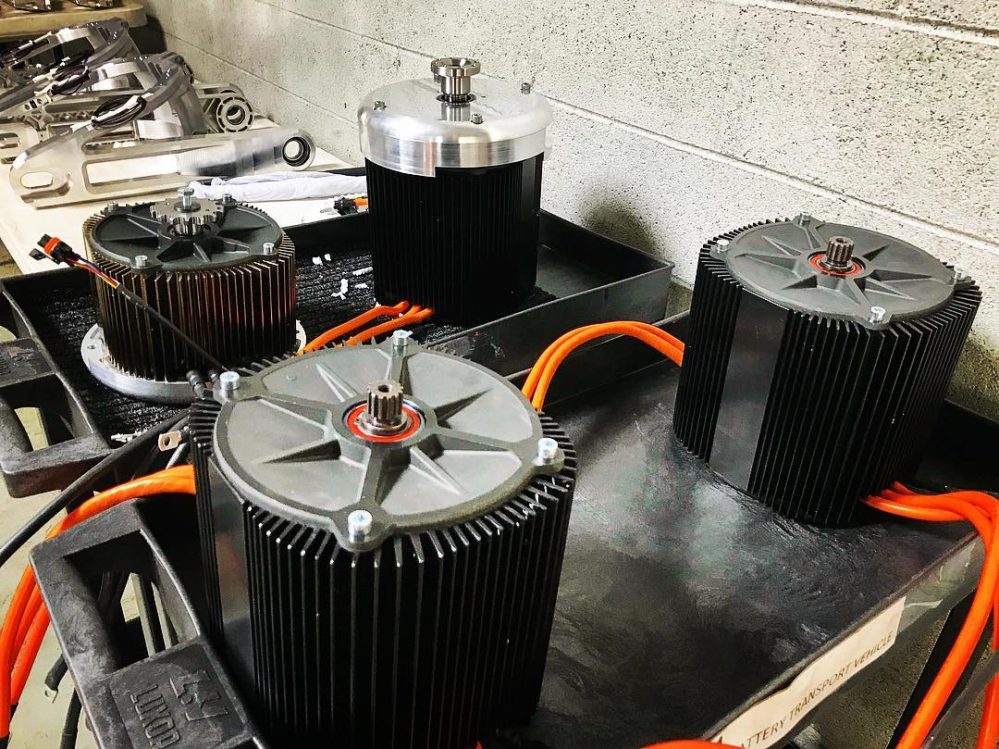 The new E-twin platform has a special significance to the company, according to Cornille:

In 1903, our founder, Glenn Curtiss, invented America’s iconic V-Twin motorcycle. 115 years later, we are introducing its contemporary, the first E-Twin!

I tried to press Cornille for more specs on top speed and range, but he was admirably tight-lipped – not yet ready to spill the beans on some of the specs that have yet to be officially released. He did tell me that the Zeus concept is sporting a 14.4 kWh battery pack today, but that he expects the capacity to increase by the time the bike is ready for production. A 14.4 kWh pack is already larger than all but the very largest battery option offered by Zero, but with this much power, that battery could go quickly.

Production is slated to begin in 2019 in order to make a 2020 model year Zeus available to the public.

And this isn’t the only exciting Curtiss product on the road map. Cornille informed me:

There are several Curtiss models currently in design and development. [Our] long-term product strategy includes models that will fit every genre and pocketbook. For the past 8 years, Curtiss has been working internally on building its brand. Zeus introduces a fresh, new design DNA that will define every Curtiss product moving forward. This all-new Curtiss DNA is organic, pure, and simple minimalism.