While the 2018 EICMA Milan Motorcycle show doesn’t begin until tomorrow, Curtiss Motorcycles is getting a jump on everyone. Today, they just unveiled two new versions of their super high power electric motorcycle known as Zeus.

The original Zeus electric motorcycle concept was unveiled by Curtiss earlier this summer at the Quail Motorcycle Gathering.

The original concept was striking, to say the least. Zeus’ chassis was machined billet aluminum and used bolted frame members instead of conventional welding. The rear suspension used a center-line cantilever mono-shock, and the front suspension employed a four-link girder mono-shock. These unique stylings combined to give Zeus a one-of-a-kind, futuristic look that is unapologetically different from anything a motorcycle has ever looked like before. 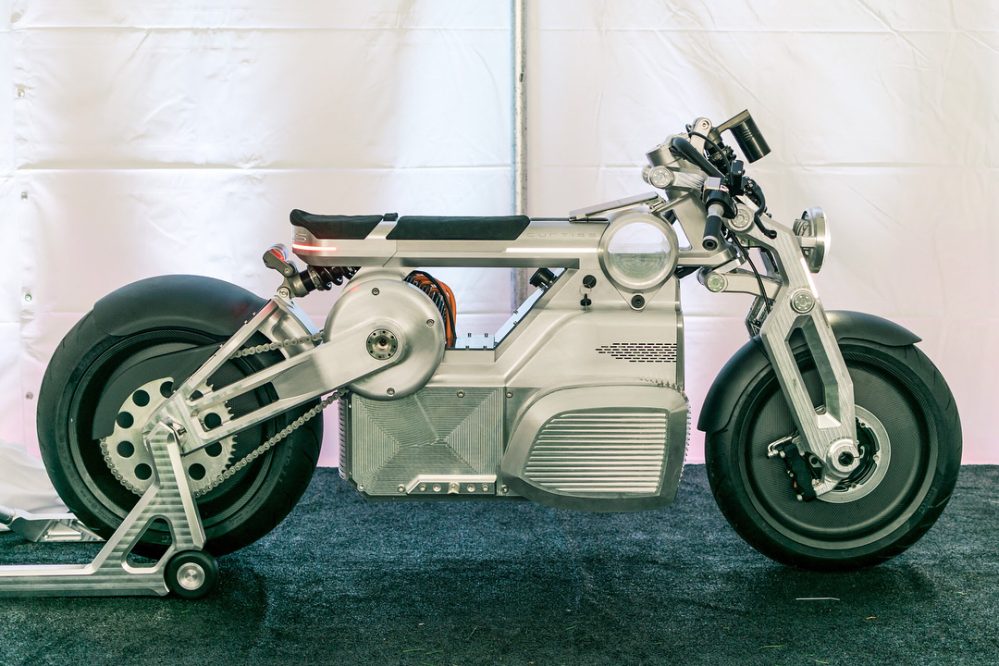 “Our original Zeus concept prototype featured obsolete battery and motor technology that was as graceful as a cinder block. This made it difficult for our team to engineer the machine we all aspired to create. With our new Advanced Technology division, we are developing new battery, motor, and control system technologies that enable us to deliver on our clean, modern aesthetic vision.”

Now the company has unveiled its new designs, fleshing out the Zeus electric motorcycle concept into two new production-ready versions: a Cafe Racer and a Bobber-style motorcycle.

Curtiss is planning to bring the two new electric motorcycle configurations to production in 2020.

The electric motorcycles will sport more than just radical designs – they’re also venerable powerhouses. Curtiss’ new Advanced Powertrain Division, headed up by Paul Ogilvie, has been hard at work packing some serious muscle into these e-motos.

“We are excited to showcase what we believe is the best technology in the industry. By utilizing cutting-edge energy storage systems to balance power and range, we aim to deliver a range of 280 miles (450 km), 145 foot-pounds of torque, and a 0 to 60 time of 2.1 seconds, all with a 140 kW motor.”

The original Zeus electrical motorcycle concept was kind of neat with its bare aluminum, industrial styling. However, these updated designs look more like something I could see someone spending an ungodly amount of money on.

The Cafe Racer still doesn’t look very comfortable to me. But then again, I’ve never looked at any Cafe Racer and thought “now that looks like a comfortable bike.”

I can’t see myself personally owning a bike like Zeus, but I still think it will play a very important role in pushing the industry forward. They will serve as a direct competitor to Harley-Davidson’s upcoming LiveWire electric motorcycle. In fact, Curtiss even says as much:

So there you have it, H-D. I hope you’re listening. You better start seriously innovating with your new line of electric motorcycles, and fast. Otherwise, companies like Curtiss will be happy to step in and take the money of customers looking for shiny, powerful and American-made electric motorcycles.