Wait, why is Facebook patenting a robotic electric motorcycle?

Facebook has apparently been working on developing a robotic electric motorcycle. A recent patent shows more detail than previously known about the strange vehicle.

As other major tech companies are getting into the electric vehicle market, Facebook appears to be hopping on the bandwagon. The exact purpose of Facebook’s robotic electric motorcycle isn’t known, but we’re starting to get a better idea of how it works.

Based on the patent drawings, the electric two-wheeler appears to feature two-wheel drive.

There are two independent drive motors mounted in a pair of opposing swingarm-style wheel mounts. The motors are connected to the single-side supported wheels via a belt drive system.

However, the drive isn’t direct. Rather, the belts spin a short driveshaft that transfers power to the wheels through what appears to be a 90-degree miter gear coupling. 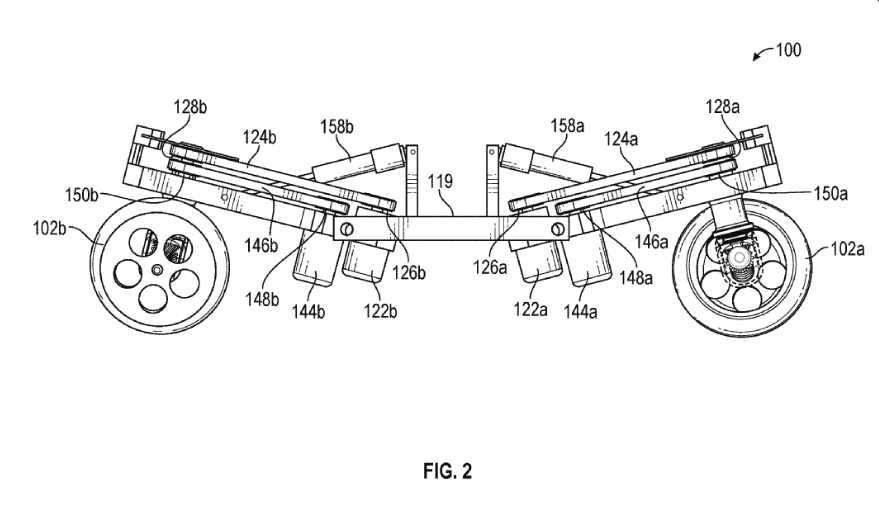 Both drive wheels feature disc brakes, but the brakes aren’t mounted like in a typical motorcycle. Instead of placing the rotors on the wheel and calipers on the fork or swingarm, both components are mounted inboard. That would keep the braking system enclosed once the robotic electric motorcycle receives its body. 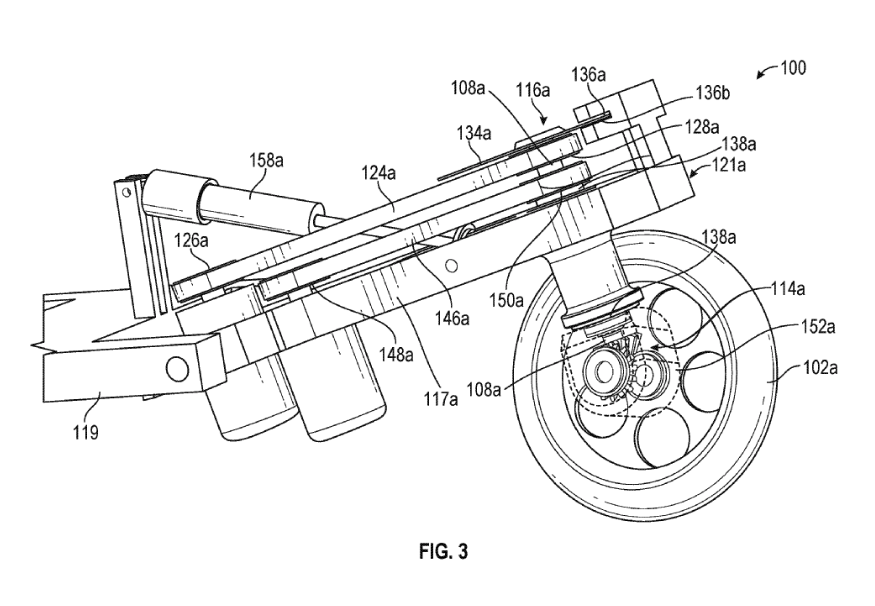 Steering can be accomplished by one or both wheels via a second belt just below the drive belt. Interestingly, the wheels can rotate through an entire 360-degree arc. While this wouldn’t make much sense at higher speeds, it could theoretically provide enhanced low-speed control. The motorcycle could potentially even move sideways for parking or other purposes that require nimble driving.

The robotic electric motorcycle is intended to be self balancing via a control loop stabilizer. As described in the patent:

I mean, it’s a pretty cool setup. Props on the design. But what the hell is it going to be used for? The patent drawings and description give a good idea of how it works, but not why it works.

The 360-degree steering and rather small wheels (though the scale is confusing) make me think this isn’t meant to be a terribly high-speed vehicle. So then what could it be? A lower speed electric scooter-style motorbike?

Tech and automotive companies have been buying up electric scooter startups to get in on the micro-mobility market, but this seems like a far stretch for Facebook. Are they planning to battle Bird and Lime by introducing their own shared electric scooter? A robotic scooter that drives passengers around would certainly be interesting and might remove the issue of people riding electric scooters in places they don’t belong. But it sounds a bit out there to me.

Could Facebook be getting ready to battle Bird’s new electric moped?

Bird did just announce its own electric moped project, so maybe it’s not a 100% crazy idea for Facebook.

Maybe Facebook is working on its own consumer product instead, hoping to compete against scooter sharing with a light electric motorcycle for urban applications. Other companies have seen success in the US with inexpensive urban electric motorcycles, so why not Facebook?

Or maybe this isn’t a people mover at all. Maybe it is meant to be some type of cargo robotic electric motorcycle for factories or even local deliveries?

At this point, Facebook’s robotic electric motorcycle patents could be leading to anything, or to nothing if they never make it off the page. We’ll all just have to wait and see what is up Facebook’s sleeve. Until then, let’s speculate wildly some more. Let us know what you think Facebook is doing in the comments section below!