Electric water sports is definitely a niche industry. Don’t get me wrong, there are some awesome electric watercraft out there, including electric boats powered by BMW i3 batteries, electric trucking company-owned electric jet skis even more radical options such as an electric bicycle with hydrofoils to let you pedal across the water.

But if you’re looking for something in between those options, something with the speed of a sport boat or jet ski combined with the thrill of a motorbike, all designed for skimming the surface of the water, then Swedish company Awake might have you covered.

Their new premium electric surfboard goes on sale tomorrow and is set to redefine what you thought you knew about surfing.

You no longer need to wait for the perfect wave, or any wave for that matter. That’s because the board, known as the RÄVIK, is an aquatic beast that can tear up the water either in the ocean or in flat lakes and rivers.

The board is designed to travel at speeds of up to 30 knots (that’s 35 mph or 56 km/h for us landlubbers) and can hit those speeds in around 4 seconds. In water!

I can barely climb out of the pool in 4 seconds. 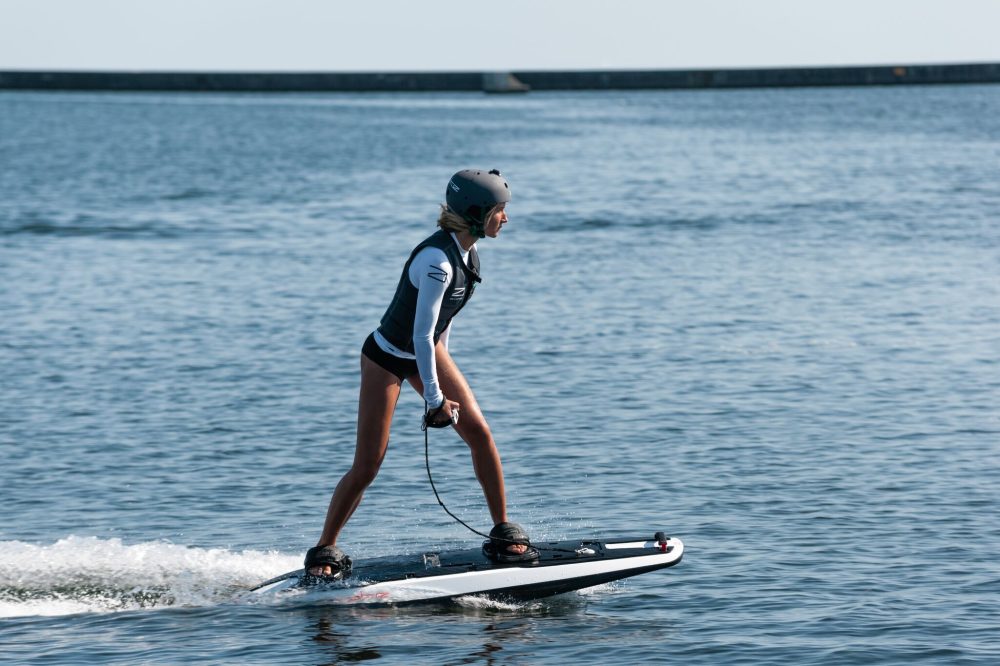 “The superior torque in the RÄVIK is thanks to it’s patent-pending drivetrain. Awake Direct Drive™ enables highly efficient water propulsion that bypasses the major losses that are usually experienced in traditional, jet-propelled water crafts.

The development of the RÄVIK is a collaboration between senior designers, electro- and mechanical engineers, software developers, and production industry professionals. Our goal has been to deliver a new benchmark within the electrical crafts segment, and no compromises have been made in our pursuit.”

The 35 kg (77 lb) and 1.79 m (5’10”) long board is comprised of a streamlined, hydrodynamic carbon fiber shell that houses the jet propulsion and enough Li-ion batteries for 40 minutes of carving up the water.

The board’s jet propulsion throttle is controlled by a wireless and waterproof handheld remote, while steering is left up to your leg and core strength.

The RÄVIK isn’t the first electric surfboard, but it may be one of the most powerful.

As described by Awake’s CEO and founder Philip Werner:

“The market for electric surfboards has seen a stagnation in new products that push the limits of what these machines can do. Not much has happened in respect to power and agility, and even less attention has been given to exterior design and user experience. The Awake RÄVIK completely disrupts the existing electric surfboard arena, and is our statement that great design and great performance belong together.”

After extensive testing, pre-orders will be going live tomorrow, August 1st, with delivery slated for September. The price? €18,900 ($22,100). VAT not included.

Hey, it is called a “premium” electric surfboard, after all.

I haven’t ridden one of these, but I’m dying to. Check out the video, this board looks absolutely crazy.

Yes, I know you could buy an electric car for this much money and still have change leftover for an electric motorcycle. And I know that I’ll never own one of these in my wildest dreams.

But, this electric surfboard makes absolutely no financial sense. But I’m glad to live in a world where things like this exist.

And maybe, just maybe, I’ll be able to rent 20 minutes on one during my next Florida vacation. Because that’s alright with me.