Review: Ride1Up Roadster Ghost electric bicycle is a great e-bike for under $1,000 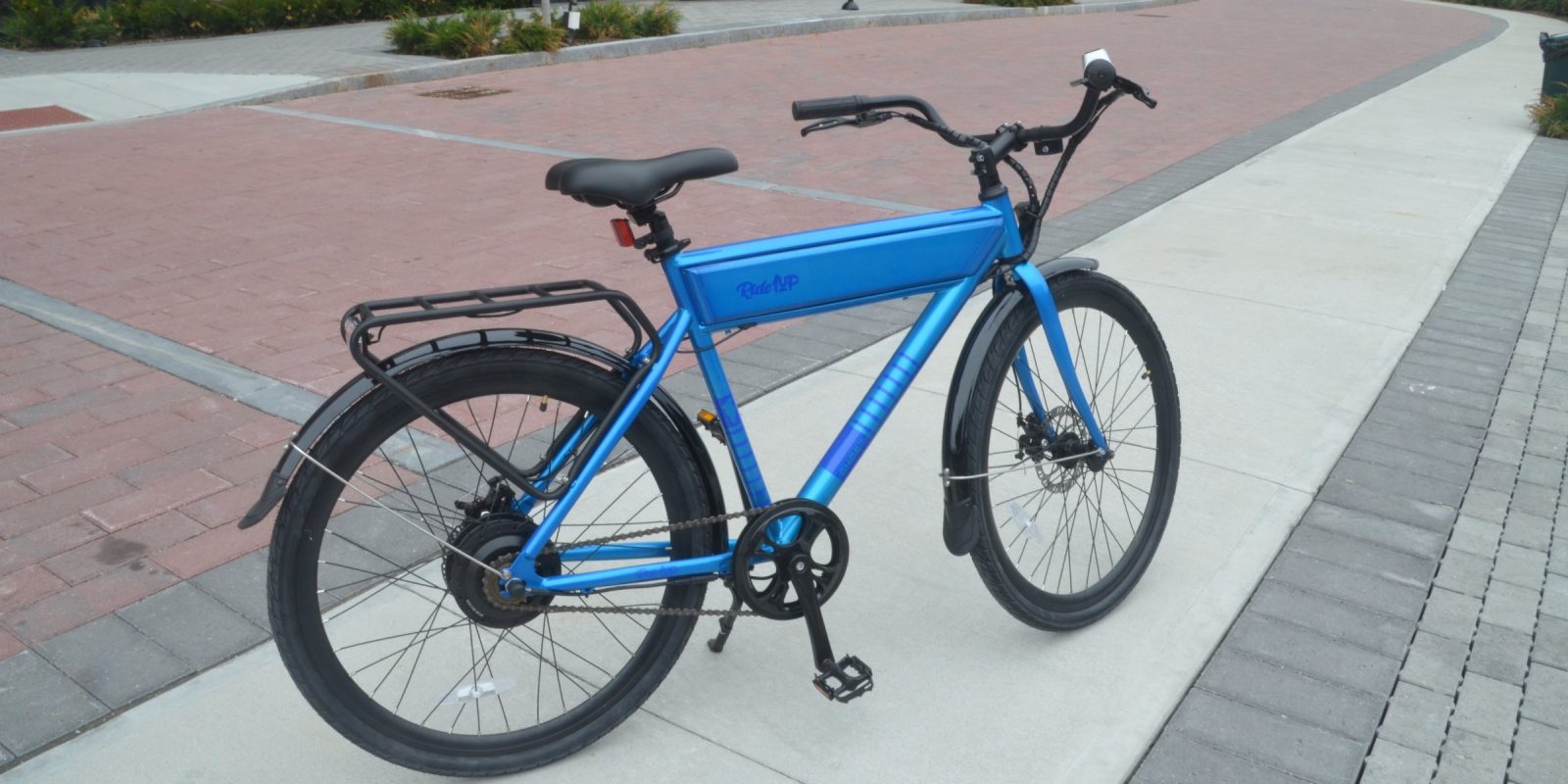 While I enjoy riding around on $4,000 electric bicycles as much as the next guy, I know that such bikes have a more limited market. Budget-level electric bicycles in the sub-$1,000 range are a lot easier for us average Joes to justify.

But sometimes it can be hard to find an e-bike that is cheap on price without being cheap on quality. After spending some good saddle time on the Roadster Ghost from Ride1Up though, I think I’ve found a great entry-level e-bike for those looking to save a few (or a pile of) bucks.

The Roadster Ghost is a slick-looking electric bicycle that is a deal at just $949.

It is based on the classic roadster bicycles from the 1930’s and I think it’s done a good job of achieving that aesthetic. With so many electric bicycles these days looking fairly identical, it’s nice to have something refreshing like this.

The bike itself isn’t explicitly remarkable, but can any $949 e-bike be that remarkable? What really draws me to this bike the combination of fairly good quality with great price.

I can see the resemblance…

Instead of offering cheap components to reduce the sticker price, Ride1Up simply removed a bunch of components. The bike is a single speed, meaning no cheap shifters or derailleur to fiddle with. The battery isn’t removable, instead it is bolted into the frame. The battery isn’t huge, but at 418 Wh it is enough for at least 20 mi (32 km) of range in the worst conditions. And in the best conditions (including pedal assist) they say you can get 45 mi (72 km) of range.

Basically this is a pretty good e-bike at a great price – and with a cool design to boot!

But let’s check out the full tech specs before we dive too deep. 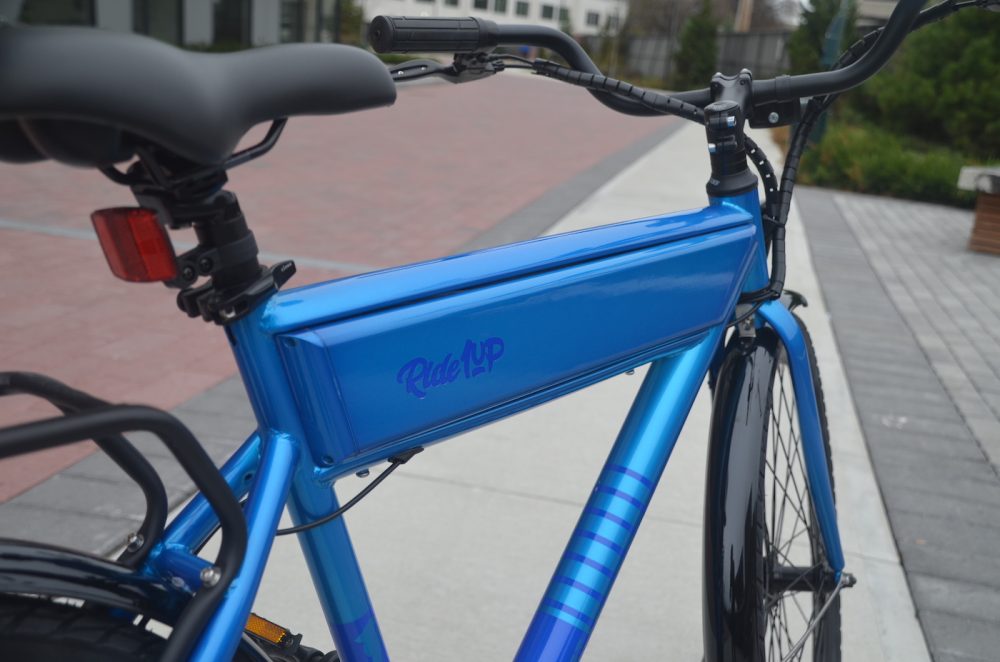 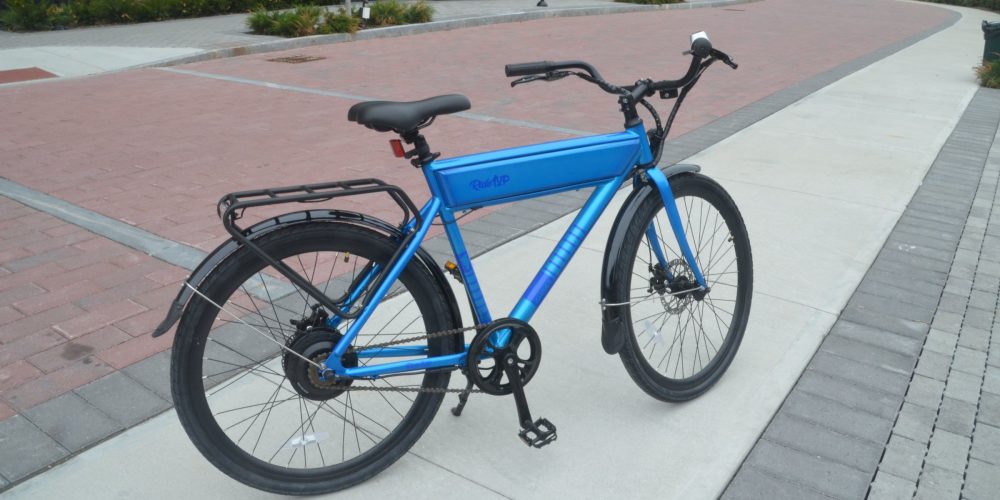 The clean lines of the Roadster Ghost are possible due to the rigid-mounted battery and rear hub motor. That leaves a lot more room for the designers to play with the layout of the bike.

The battery isn’t removable – at least not without a toolbox. That will make it harder for thieves to make off with the most expensive component on the e-bike. But it also makes it a bit less convenient to charge. I rolled the bike into my apartment and charged it in my living room, but if you have a garage then you could just charge it there. 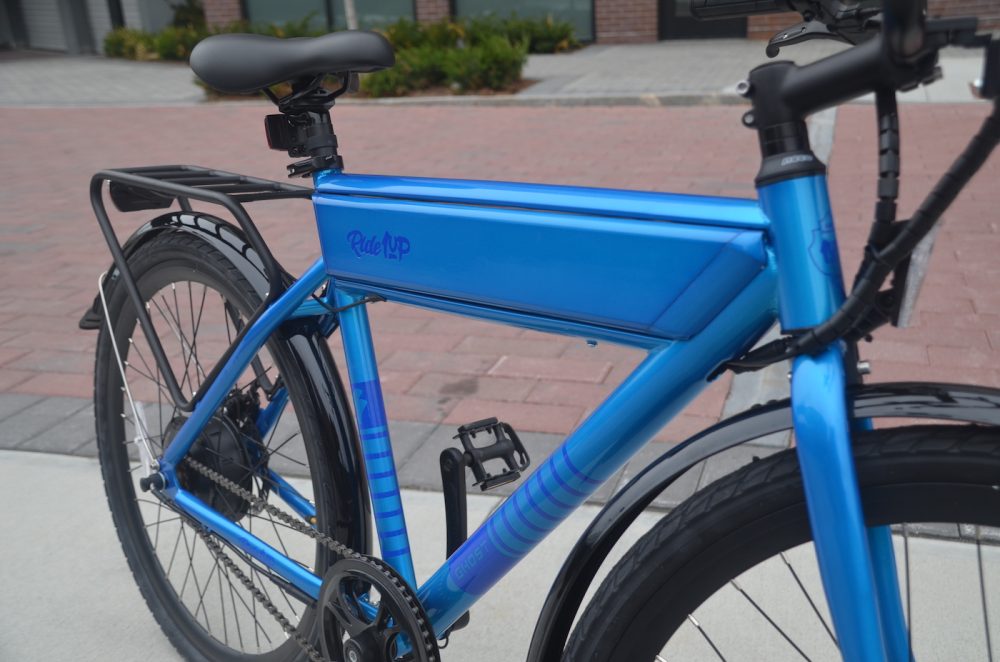 Compromise is a common theme with the Roadster Ghost. It’s an e-bike full of compromises.

That battery is hard to steal but also hard to remove. There are no gears to shift through, but that keeps it lighter (relative to other full-size electric bikes) at just 50 lb (22 kg). The disc brakes aren’t hydraulic, but the price is crazy low at $949. There’s no suspension, but they give you a gel seat. It’s compromise after compromise, but I think it works. You can’t have the best e-bike for this price, but you can have a pretty darn good one.

Consider the competition – at this level we’re talking about $600-$800 Amazon bikes. While they can be alright, they don’t have the same level of components and they don’t look nearly as good. Those bikes have no-name tires, shifters, brakes, and other components. The Roadster Ghost’s Tektro Aires brakes and other components aren’t top shelf, but they at least come from respectable manufacturers instead of whatever factory was pumping out the cheapest levers that day. And I’ve seen more expensive bikes that don’t offer added features like built-in lights or included racks and fenders.

The rack and fenders actually really surprised me. Both of those are usually $50+ accessories that manufacturers will offer to up-sell you at checkout. But the Roadster Ghost comes standard with both! And that’s not some cheap rack either – it’s a 50 lb rated rack that in all honesty could probably carry a passenger. Not that you should do that. Don’t do that.

The fenders aren’t quite as nice as the rack but they work just fine. I had a bit of trouble installing the front fender as the wire mount seemed to run into the front brake calipers. But I just bent the wire into an arc with my hands and it cleared the brakes just fine. That’s probably not something you have to deal with on a $4,000 e-bike, but I’m fine with some slight re-engineering if it will save me $3,000.

The Roadster Ghost actually rides quite well. The motor is surprisingly quick to accelerate. With a 48 V battery, that “500 W” motor is definitely putting out more power than it says on the sticker. The motor is also fairly quiet, especially for a geared motor. You can still hear it whine as you pick up speed, but it’s a gentler noise than some other e-bikes we’ve reviewed.

Both the throttle and pedal assist system (PAS) have a slight lag from the time you engage them to the time the bike starts moving under electrical power. It’s maybe only a half second, but its noticeable because when the motor does come on, it comes on strong. I asked the company about it and they said that it’s actually already been updated on their new controllers that all bikes are now shipping with. I just got an earlier one with the first version controller. The roll-on throttle and PAS should now be smoother. 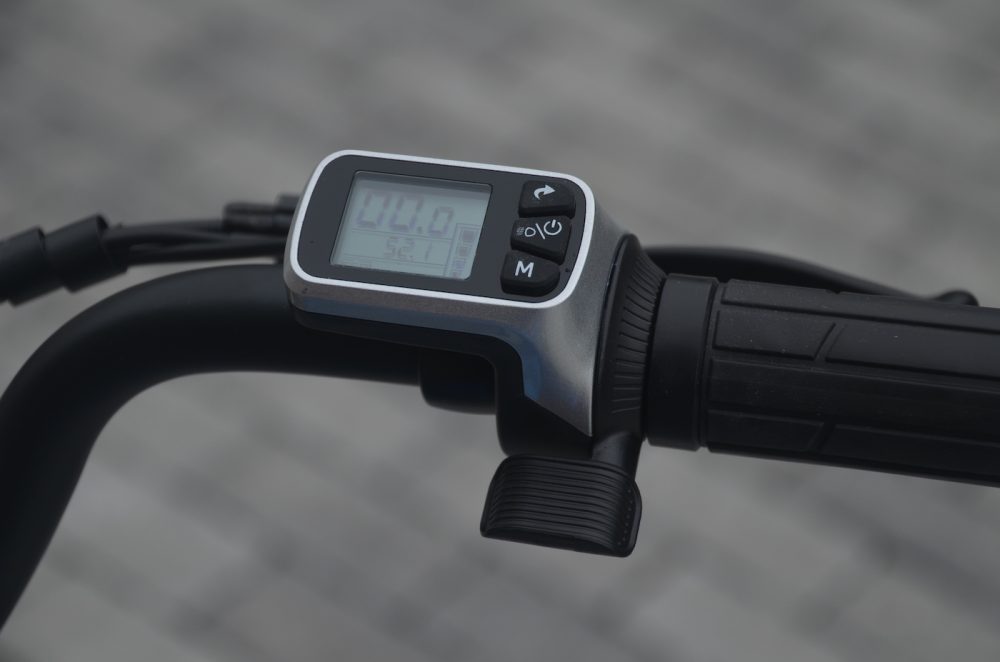 There’s no suspension on this bike so you probably won’t want to go smashing through too many potholes. But the gel seat helps a bit. I did some minor off-roading on gravel trails and the bike rode just fine. It wasn’t like a downhill mountain bike, but I was perfectly comfortable.

The range is pretty good for a full-size electric bicycle. I don’t use the pedal assist much, which means I’m looking at a range of around 20 mi (32 km) on throttle-only. But if you aren’t as lazy as me and want to pedal, you’ll do even better for range. 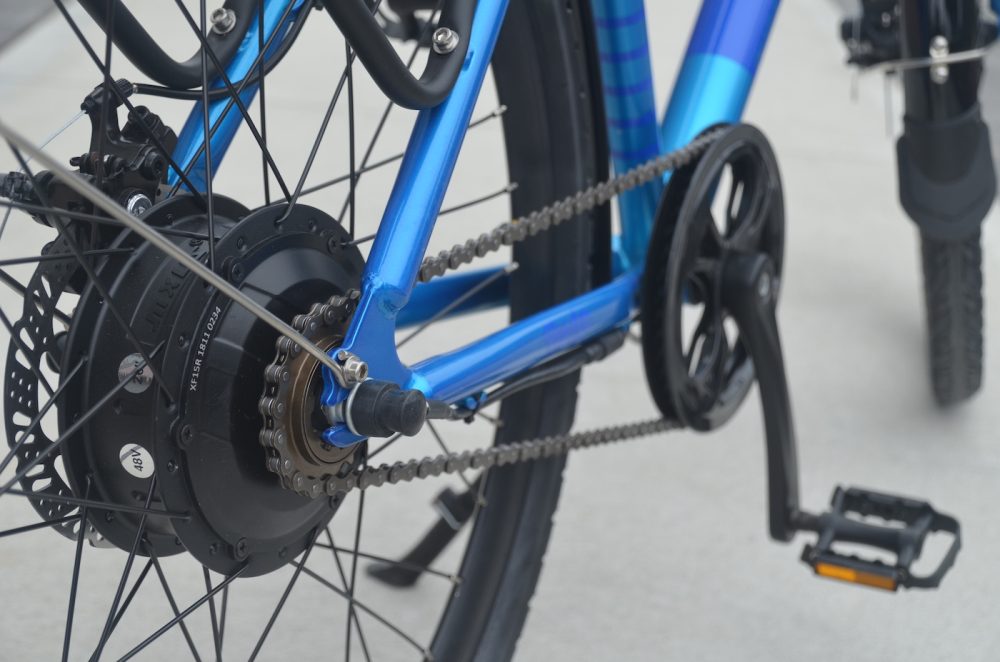 The downside of the single speed setup is that you can’t pedal it too well above 15 mph (25 km/h). The Roadster Ghost is geared a bit lower which is great for starts. But once you get near the top speed of the bike, your legs will be spinning like an egg beater. So if you’re happy with 15 mph then you’ll be golden. But if you like to pedal faster, then you’ll be left wishing for a higher gear ratio. Fortunately, the pedal assist system (PAS) keeps working even if you don’t pedal as fast as necessary to provide power to the chain. So you can sort of “mime pedal” at about half speed and reach somewhere around 22 mph (35 km/h).

There are three PAS speed settings: Eco, Mid, and High. They felt adequate to me, though I don’t pedal all that much.

In my opinion, this e-bike is all about getting around. If you’re looking for an exercise-focused electric bike then you’ll likely want one with more levels of pedal assist to fine tune the bike to your desired level of effort. The Roadster Ghost is a commuting machine and the throttle control makes it great for commuting quickly and nimbly in traffic and around obstacles.

For $949, I can’t really complain about anything on this bike. Sure, it could have nicer hydraulic brakes or a wider gear range or a mid-drive motor – but those are all more expensive add-on’s.

For its price, I think the Roadster Ghost is actually a steal of a deal. It’s well put together and seems like it could last you for a while. As a first e-bike or for anyone on a budget, I’d definitely recommend it.

What do you think about the Roadster Ghost? Let us know in the comments section below.