Electrek Review: The Boosted Stealth electric skateboard is still the leader of the pack

Electric skateboarding has been growing in popularity over the last few years as more people discover its benefits. From pleasure riding to actual commuting, electric skateboards and longboards are coming into their own as legitimate forms of personal electric transportation.

Boosted, a leader in the electric skateboard industry, recently released a new line of electric shortboards and longboards. Their flagship longboard is known as the Boosted Stealth, and I’ve been riding it around for the last few weeks. Here’s the skinny.

If you’re short on time then this is what you should take away from this review (and you should also watch the short video below).

The Stealth has re-affirmed Boosted’s status as the quality and performance leader of the industry.

Now let’s get into the details.

The Boosted Stealth is definitely one of the fastest and most powerful boards that Boosted has ever produced. In fact, it is so powerful that it comes with tons of warnings on the box and sprinkled around the manual about just how dangerous electric skateboards can be. With this much power under your feet, you really need to be careful and take your time getting accustomed to the board.

In fact, if you’re considering this board, or any electric skateboard for that matter, you better also be considering a good helmet.

Fortunately, Boosted makes getting accustomed to this powerful electric longboard easy with five different power levels that limit both the top speed and the intensity of the acceleration. The power levels are Beginner, Eco, Expert, Pro and Hyper. While Boosted’s other boards have the same first four levels, Hyper is only available on the Stealth. 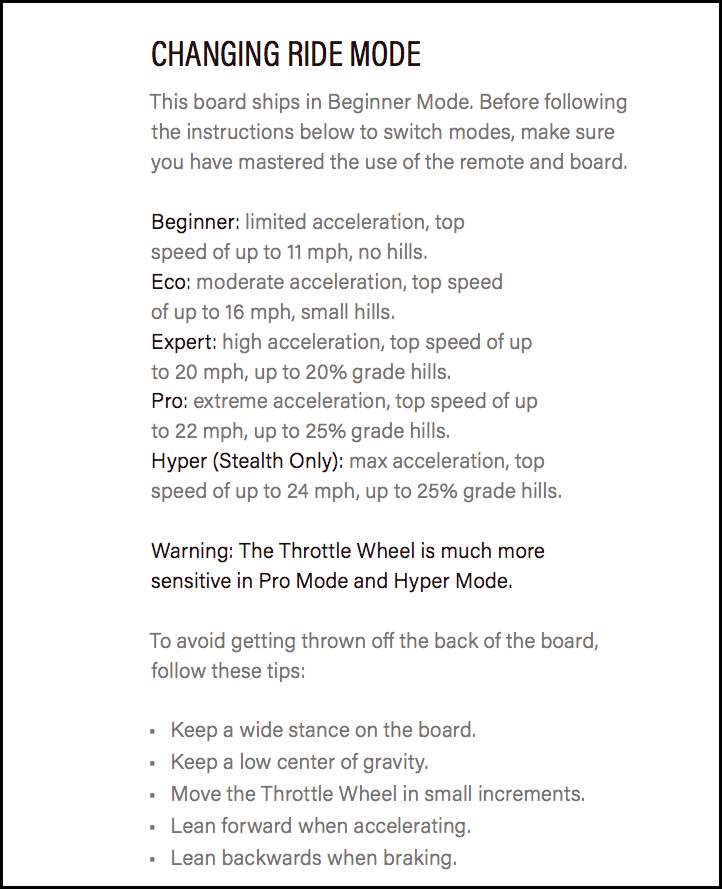 In Beginner mode, the board accelerates gently and tops out at 11 mph (18 km/h), which is a great way to learn to ride it. As you bump up through the power levels, you really start to feel the intensity increase.

In fact, I spent most of my time cruising around in the third level, with speeds of 20 mph (32 km/h) feeling plenty fast for my pleasure riding and commuting.

But with a board this powerful, you’re definitely tempted to see what it can do. You know, for science.

So I bumped it up into Hyper mode and put my faith in the build quality of the board and the path maintenance of the local Parks Department. At those speeds, you have the sensation of almost flying. I felt like Aladdin on my slightly-whirring magic carpet.

Slowing back down brings an “I survived” grin to your face as you decide how many more times to tempt fate.

While going that fast was a serious adrenaline rush, I still knocked it back down to level 3, Expert mode, for most of the rest of my testing since I don’t often ride past 20 mph (32 km/h) anyways.

Plus, Hyper mode devours the battery faster than the other more sensible modes.

Speaking of the battery, it’s massive, though it doesn’t look too big due to the elegant design of the board. However, it definitely takes me farther than any other electric longboard I’ve ridden. Many people won’t get the full 14 mi (23 km) that the board is rated for due to harder and more intense riding styles, but the board’s large battery and efficient drive team up to provide impressive range.

Unlike previous editions of the Boosted boards that used decks, trucks and wheels manufactured by other reputable skateboard companies, Boosted began producing all of these parts in house with their new line of boards. Since the previous companies Boosted had sourced parts from were known for their high quality production, some have worried that Boosted might not be able to match that quality.

In my opinion, the skate parts on the Stealth are just as good. The Stealth’s board is no longer bamboo and is instead a laminated mixture of composites, but is still just as springy and comfortable. The wide spacing of the trucks also helps take advantage of the shock-absorbing nature of the springy deck, as if you are riding on a rocket-powered leaf spring.

The wheels are also quite soft and are a night-and-day difference when compared to some hub motor boards I’ve ridden. While electric longboards with hub motors do have the advantage of cleaner lines and no external chunky motors to protect, their thinner wheel covers necessitated by the wide motors make the ride fairly harsh. Boosted’s wheels are soft and thick, helping them absorb the road vibration instead of simply transferring it to your feet and legs. 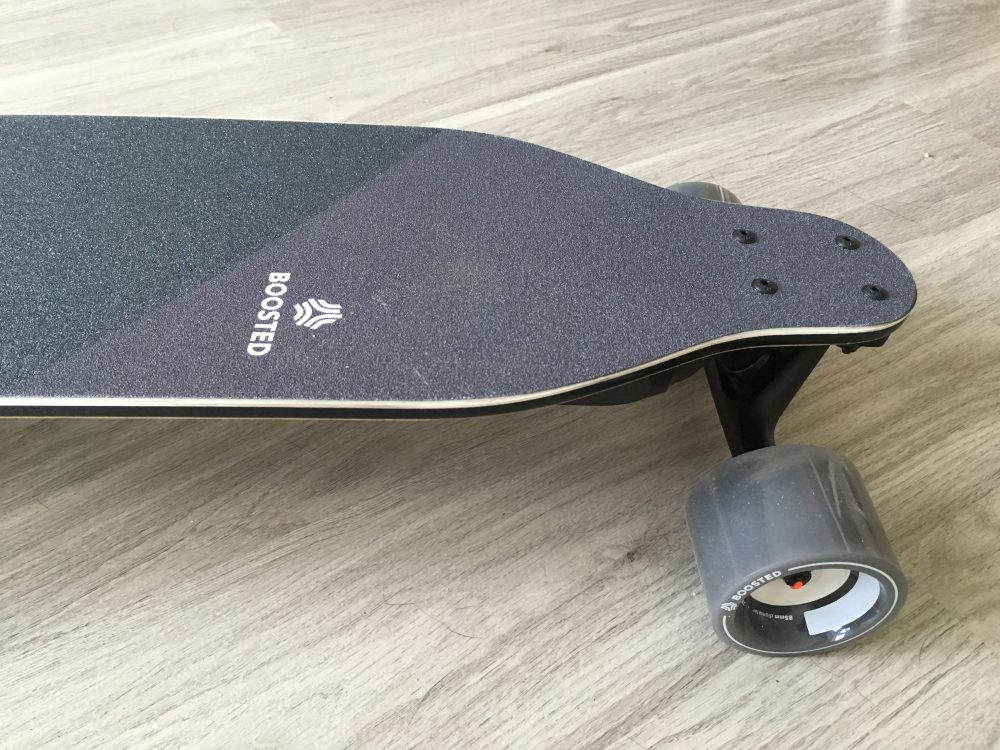 The Stealth’s controller also felt nice and comfortable, though it took some getting used to. I mostly ride boards with one button controllers, where you simply push a lever or wheel to accelerate. On the Boosted, you have to first squeeze a trigger to ‘activate’ the motors, meaning they are now able to receive a signal. Then you press the throttle wheel to actually initiate the motors spinning.

If you don’t pull the trigger, you just kind of coast without the ability to control the motors. It’s a bit of an odd thing to think about, and feels a bit like pushing in the clutch on a manual transmission vehicle. Most of the time you’ll just keep the trigger pulled though, meaning you have instant acceleration and braking power available.

This two button system removes the chance for an accidental take-off, which is important considering how much torque and power the Stealth has. If you slip the controller into your pocket, you aren’t likely to accidentally send your board flying if you forgot to turn it off.

The Boosted also has a reverse option, which not all boards have. This is actually my first electric skateboard to use reverse. At first I thought it was a bit of a gimmick – why would I need to go backwards? But I soon found it to be super helpful, especially when trying to make a sharp turn. If there wasn’t enough room, I no longer had to hop off and adjust my board by hand. I could just do a three-point turn and be on my way. Plus it was always fun to ride up to something I needed to see or touch, and then scoot backwards again.

Another area the Stealth excels at is hill climbing. For most inexpensive electric skateboards, flat land cruising is decent but hill climbing can overheat and destroy the motors. Not the Stealth though – it can climb steep hills all day.

Its hill climbing power is seriously amazing. I keep looking at the motors, which easily fit in the palm of my hand, and wonder how those things can drive me up a hill at such high speeds, but somehow it just works. 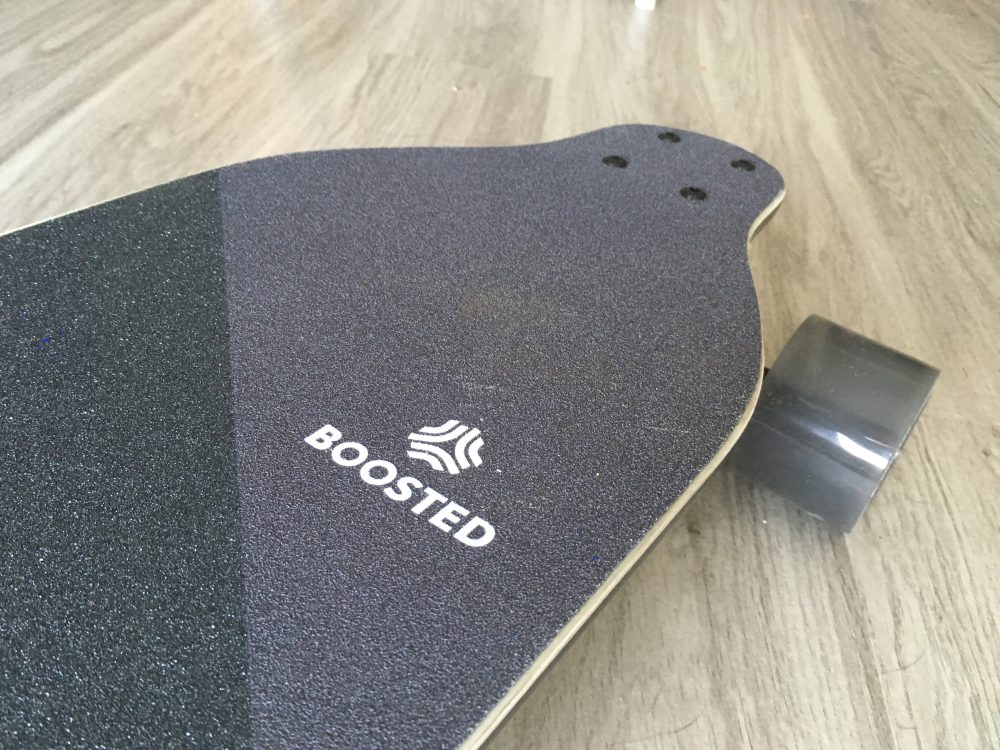 Of course no product is perfect, and the Stealth does have some downsides. For one, it’s fairly heavy. The stealth tips the scales at around 17 lbs (8 kg). It doesn’t feel too bad at first, but if you carry it around for any amount of time, it gets heavy. Of course that weight is also the reason it has such awesome performance – you can’t go far and fast without a lot of battery and motor – both of which are heavy components. So I understand why it’s heavy. But logic still doesn’t make my arms any less tired when walking through crowded areas.

Secondly, it’s expensive. $1,599 expensive. So this thing is anything but a cheap toy. But if you want these levels of power and range, you’re not going to find them in a cheap toy. Plus, Boosted includes top notch parts that you just don’t get with other cheaper boards, such as a high quality Meanwell charger instead of a generic, no-name fire starter. So you really do get what you pay for when it comes to the Boosted Stealth. And if you still want Boosted quality at a lower price, you can always give up some speed and range and pick up one of their more affordable boards.

But for those that want the best of the best electric longboards, the Stealth is your option.

What do you guys think of Boosted’s new flagship e-longboard? Let us know in the comments below!