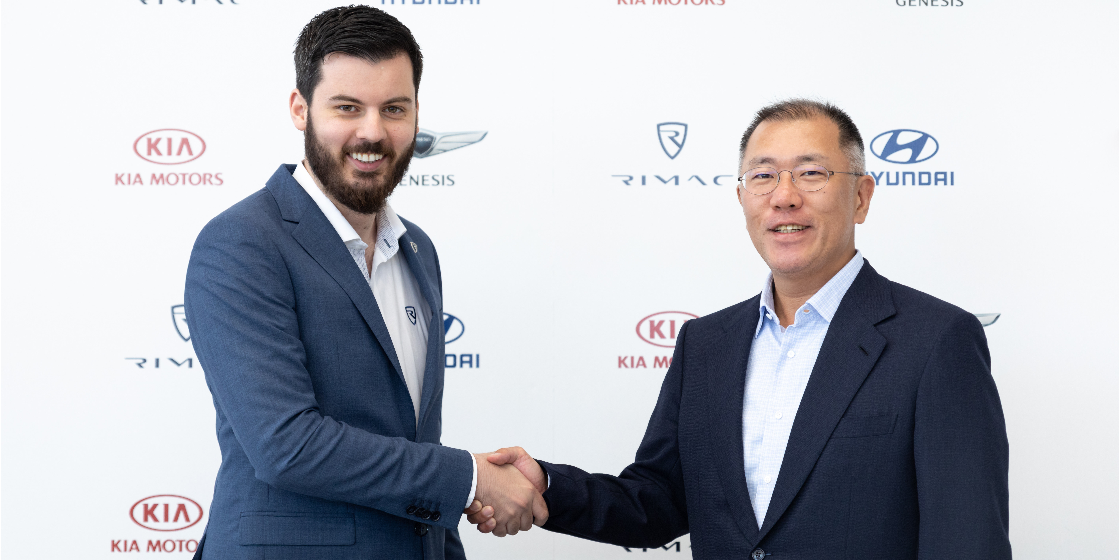 Hyundai and Kia have been getting more serious about electric cars lately, with the new Kona, Niro and Soul EVs coming out all as good packages at reasonable prices.  But none of these are performance monsters, moreso regular, everyday, utility cars.

That all seems to change starting today, as the two companies announced an 80 million Euro ($90m) investment into Rimac Automobili, the Croatian supercar maker behind the Rimac Concept_One and upcoming Concept_Two.  The intent is to collaborate on the production of two high-performance electric sportscars, one of which will debut under Hyundai’s “N” brand and the other which will use fuel cell technology.

The “N” brand isn’t well-known in the US, as until this year Hyundai had never released an “N” car here (the 2019 Elantra GT is available now, but it’s gas-powered).

So far, there are very few additional details surrounding the partnership and the car, except that they plan to have a prototype finished by 2020.  When that prototype will hit the road, we don’t know.

Rimac has partnered with other companies before.  They’ve supplied technology for Aston Martin, Jaguar and Koenigsegg among others, and Porsche has taken a stake in the company.  They’ve also had investment from Camel Group, a large Chinese battery manufacturer.  Their goal is to become a large supplier for electric cars, eventually reaching “Tier 1” status.

Despite all of these big partnerships and dreams, Rimac is still a small company.  They’re only about 500 employees, and are from a nation which is not known for its auto manufacturing prowess (Croatia).  Nevertheless, they’ve managed to do some very impressive things and clearly the industry has taken notice.

We here at Electrek have said over and over that while we obviously need normal, everyday electric cars for people to drive – and that these are more important because more people will buy them which means more gas cars (and thus more emissions) will be displaced – we also need exciting electric cars to capture the public imagination and let people know how cool EVs can be.

Tesla knew this, which is why they started with the Roadster and moved down from there.  The image that afforded them has helped them massively in selling EVs and remaining a desirable brand over the years.

Unfortunately, there are very few other electric sportscars out there not made by Tesla – at least not available in large numbers, or in a reasonable price range.  Most everything is either a front-wheel-drive economy car or a small crossover-style SUV.

While Hyundai/Kia’s new electric releases seem quite competent, and the Soul EV seems like it should be quite exciting in its own right (with more power than any other model in the Soul line), at the end of the day they don’t capture quite as much of the imagination as the Roadster did.

So a new high-performance electric sportscar, built with the help of Rimac, the company behind one of the fastest, craziest cars to ever exist, should bring a lot more excitement to Hyundai and Kia’s stable.

Of course, I’ve also said that I’m tired of seeing concepts and want to see EVs on the road.  As of now, this isn’t even a concept, it’s not even a concept of a concept – it’s just an announcement of intent to build a concept.  And while Hyundai and Kia have proven that they can build electric cars, and sell them, they are also only currently focusing on “compliance” states with their vehicles, rather than having nationwide rollouts.

Further, while they plan to build one battery EV, the other is a fuel cell car – and that technology, while a little interesting for certain applications (long-haul trucking would be one), seems a bit of a non-starter for consumer vehicles.  Hyundai seems to still think they’ll eventually take hold, but we doubt it.

In terms of electrification, they’re already ahead of a lot of Asian automakers – Honda and Toyota specifically, though they lag behind Nissan some.  Nissan has fewer models, but more of an ecosystem and sells their Leaf much more broadly and effectively – they are certainly committed to EVs.  We’d like to see Hyundai and Kia continue to build on their solid products and sell them on a larger scale, in larger numbers, and then show us what they can do with a serious electric sportscar.  I, for one, would love to drive it.