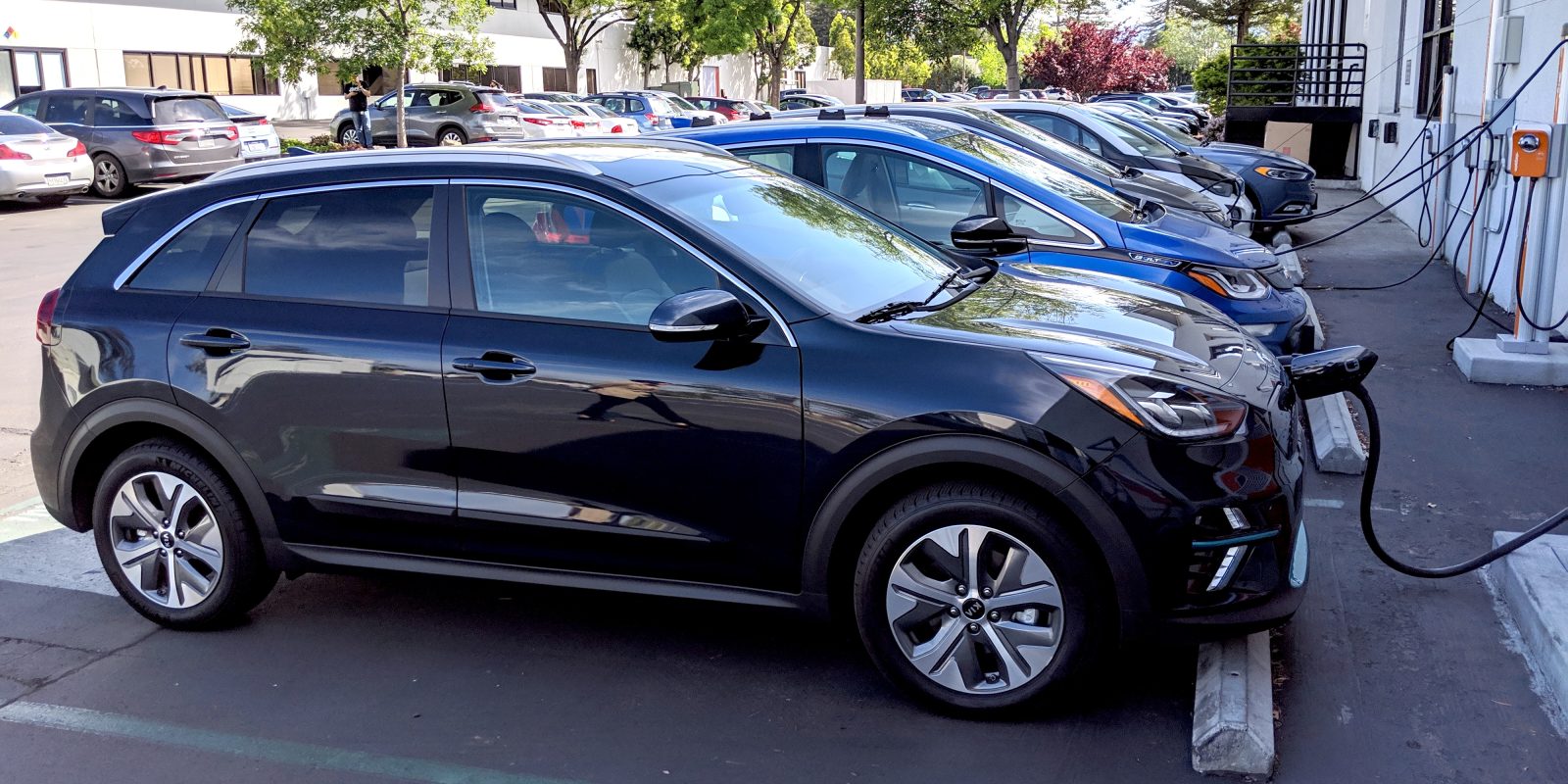 Ever since it was announced, Kia’s Niro EV has been an interesting proposition. Fred did a fantastic one day first look at the Niro earlier this year, but I wanted to spend some more quality time with it and throw in my family for “extreme” testing.

Our Tesla Model X lease is ending soon and my wife is looking for a replacement that rides high, has good range, and is all-electric. Obviously the Model Y makes a lot of sense for us, but it won’t be ready until late next year and figuring “Elon Time”, ramp up, and first dibs to Californians, it will probably be well into 2021 before these are rolling out en masse.

First of all, I will say that the Niro outsteps its step cousin the Hyundai Kona in both form and function. Sure they have a very similar drivetrain and battery, but the Kia Niro looks a lot more like a crossover or SUV with its higher stance. That makes significantly more room inside and a better drive height while only penalizing the range by a few miles (239 miles/charge). Fred noted that the front grill on the Niro has the charge port which he disliked. While I’m ambivalent about it ––  it sure beats that faux grill on the Kona.

The Niro isn’t going to win any design contests, but along with its hybrid and plug-in hybrid siblings, they don’t exude “weirdmobile” at all either. In fact it was hard to discern that this was even an electric vehicle from the back and sides. A lot of people, present company included, like that.

I got the premium black model. I like it. 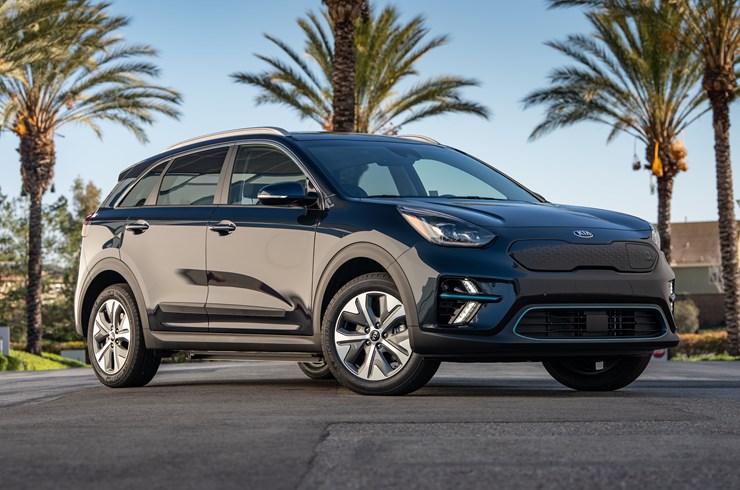 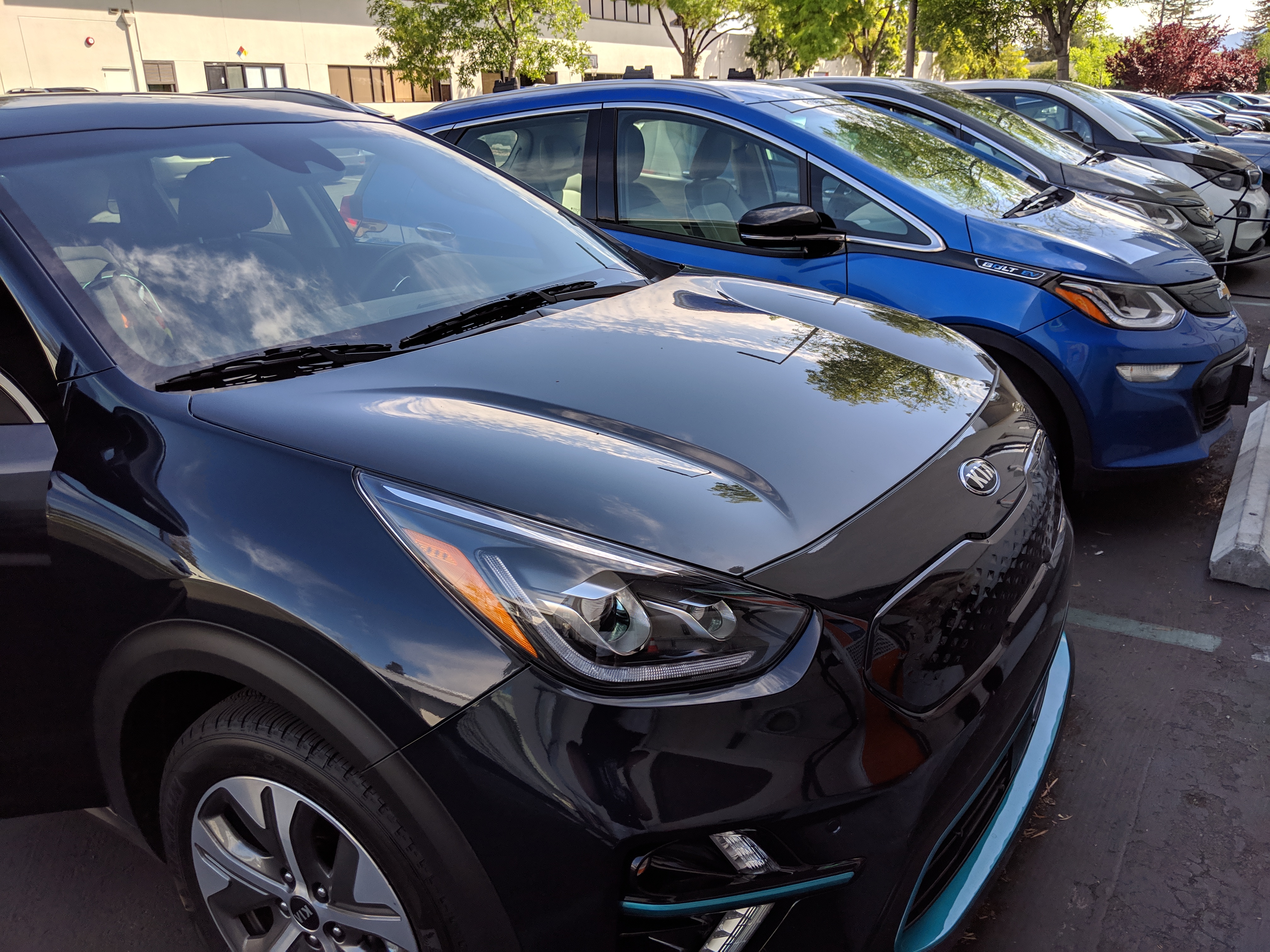 Besides the aforementioned 2021 Tesla Model Y and Kona EV, I would also put the Chevy Bolt and Nissan Leaf e-Plus in the same grouping of long-range crossover-ish hatchback EVs. As you can see in the chart below, they are all pretty similar. I have owned a Chevy Bolt for over two years and have driven the other cars on occasion, so I feel like I know this class inside and out. 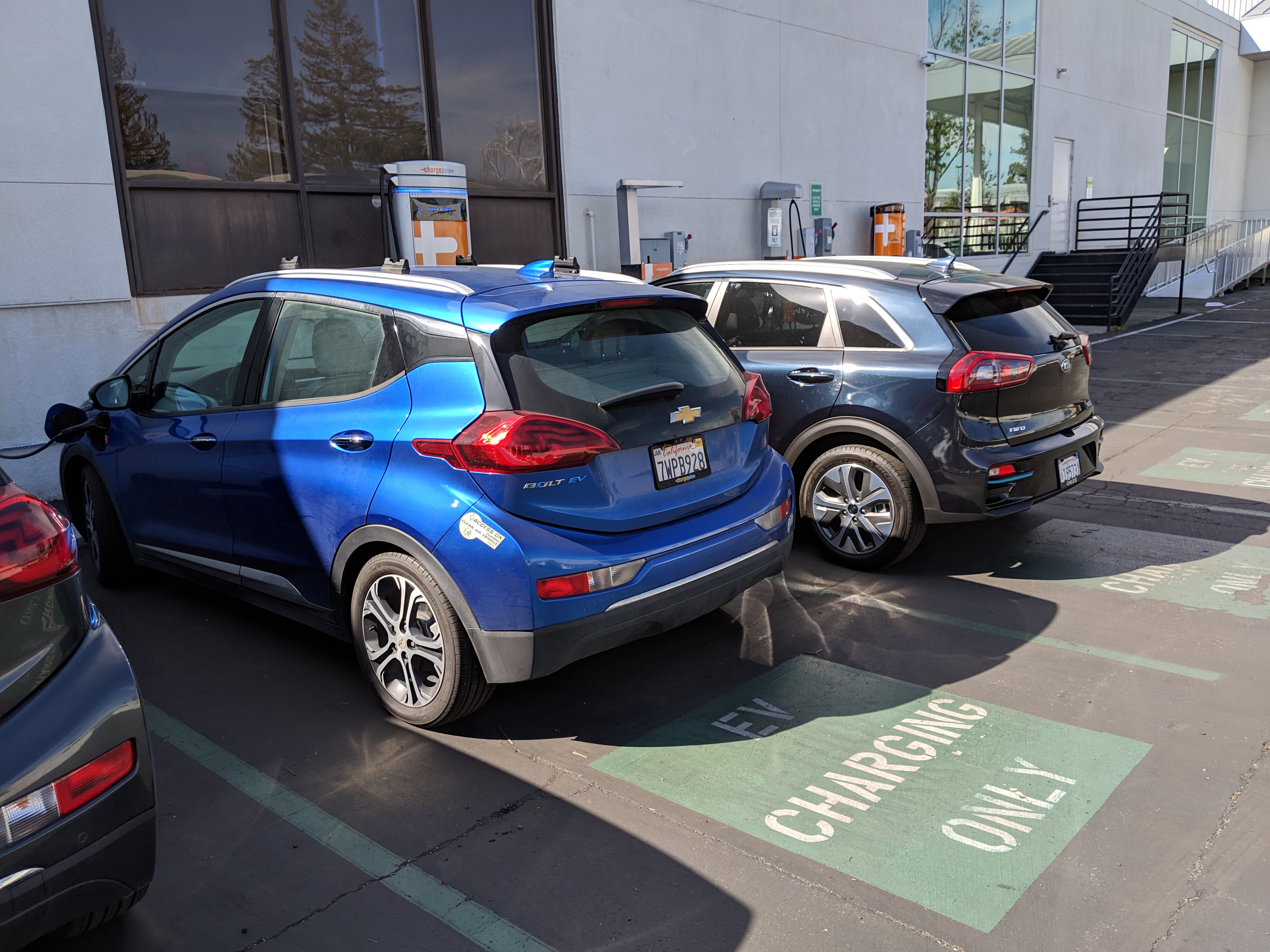 You get in the car, you push the power button and you DIAL into drive. Yes DIAL. The Niro has a dial rather than a normal gear shifter. I don’t know why, but it took a little getting used to and I’m not sure why EV manufactures think they need to reinvent the wheel on gear shifters. BMW’s i3 comes to mind here. The Chevy Bolt’s fake shifter isn’t perfect but at least you intuitively know how to use it even before stepping into the car. I eventually got used to the dial, but again, why? 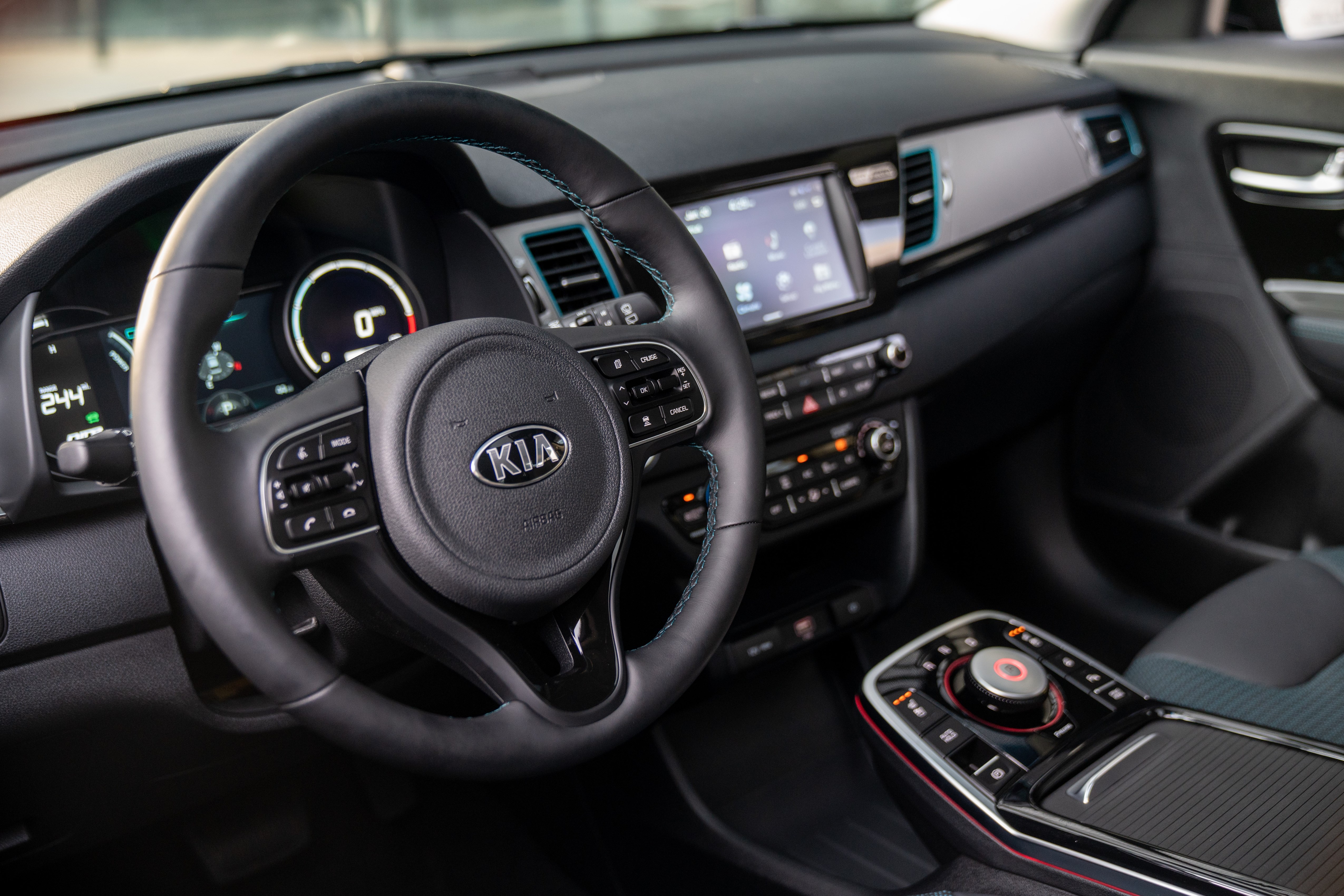 Behind the steering wheel are 2 paddles that control the amount of Regen. Clicking right means more and left means less. Every time you start the car you are in level 2. This is somehow worse than the Chevy Bolt which forces you to double-click down to “L” if you want strong regen.

Advice to EV makers: After the first week or so, almost everyone wants max regen all the time. Make this the standard and require extra clicks to make it regen less.

As for the regen, at max, it didn’t feel as strong as the Chevy Bolt, but was more powerful than Tesla’s current regenning and I was able to do most of my driving with one pedal. 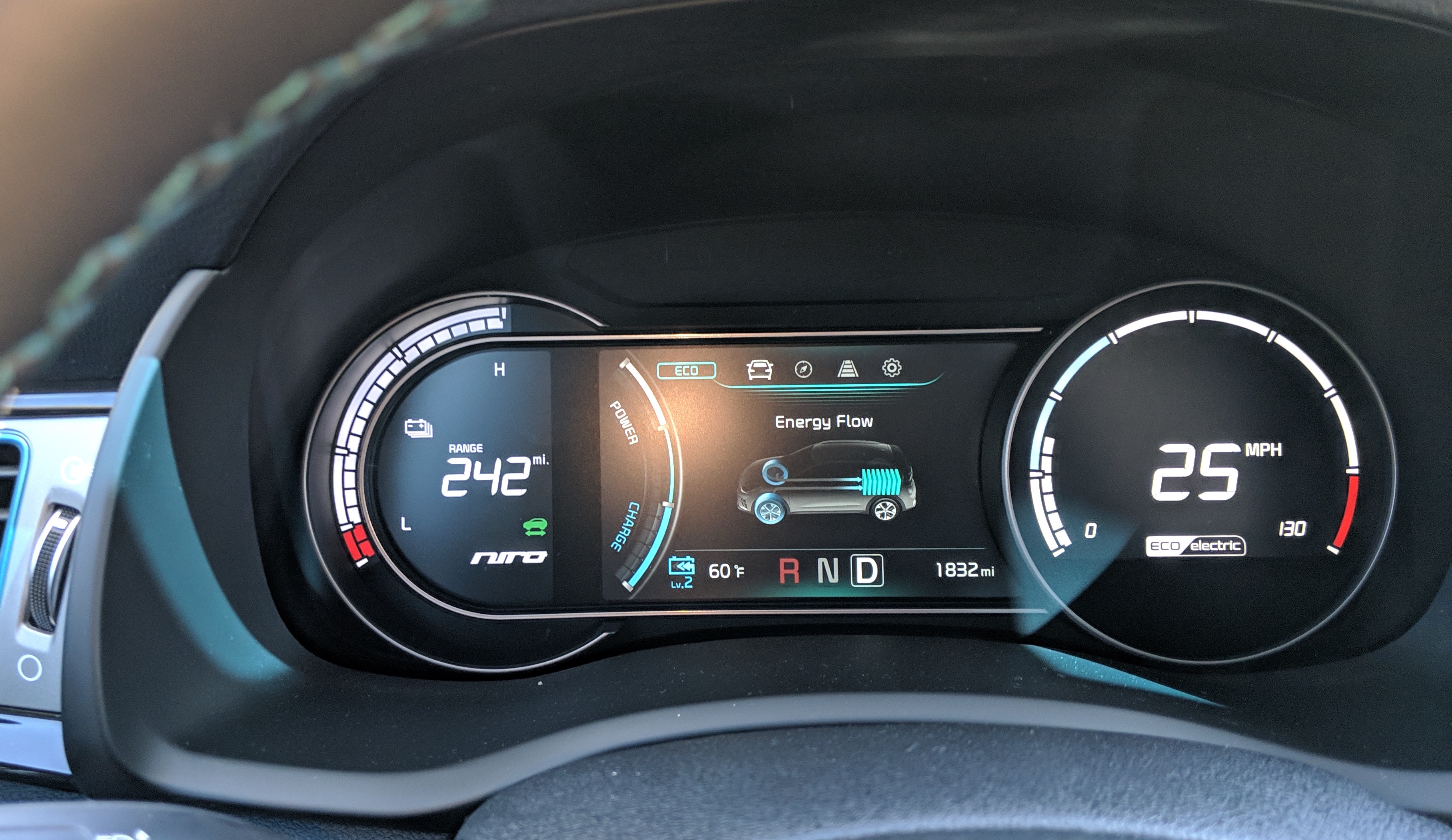 Probably the biggest disappointment I had with the Niro was the off the line acceleration. Sure it beats most ICE cars, but with a bigger battery and motor than the Chevy Bolt, I expected another level of G forces out of the gate. Nope, the Bolt crushes the Niro.

Instead, even in sport mode, I found the lack of acceleration to be off-putting. It really zaps the fun out of driving an EV when it accelerates like a budget ICE crossover. Of course my paranoid mind wonders if Kia is throttling the acceleration to keep its other offerings relevant. I think the Nissan Leaf might be quicker off the line (ouch).

Especially in sport mode I found highway 45-65 type acceleration to be much better and more similar to the Chevy Bolt or Nissan Leaf. The Niro really shines on the freeway, zooming around quietly and effortlessly.

Braking seems very solid for a car in this class. I had the family in the car most of the week so no intense brake tests this time.

The Kia Niro EV is about the only budget BEV I’d feel comfortable taking onto soft gravel and doing some light off-roading. During my time in the Bay Area, I found some bumpy mountain dirt roads to test on. While I wasn’t blown away by the way it handled itself, I was almost completely confident in not getting stuck or breaking something. I would not recommend taking the Niro into mud or ‘very’ off road. It just doesn’t have the suspension, AWD, clearance or tires to properly navigate in real dirt. However gravel and the odd pothole are no match for the Niro.

On the road, the Niro handles admirably for a small budget crossover. I found less wheel slip than I would expect in my Chevy Bolt, particularly on gravel or wet surfaces, and it also wasn’t as tight on turns on dry surfaces. There was no winter climate to be found or tested on this trip.

The interior of the Niro really shines when compared to the Bolt, but it is even good compared to Nissan’s Leaf and others in this class. I, of course was given the EX premium package and it felt as nice as you could expect for a $35,000 Kia. There are tons of buttons, some being redundant (like the “EV” button, in an EV! What happens when it isn’t in EV mode? Is it off?).  Point is, if you like buttons for everything and even a few things that you don’t even know what they do, this is your car. 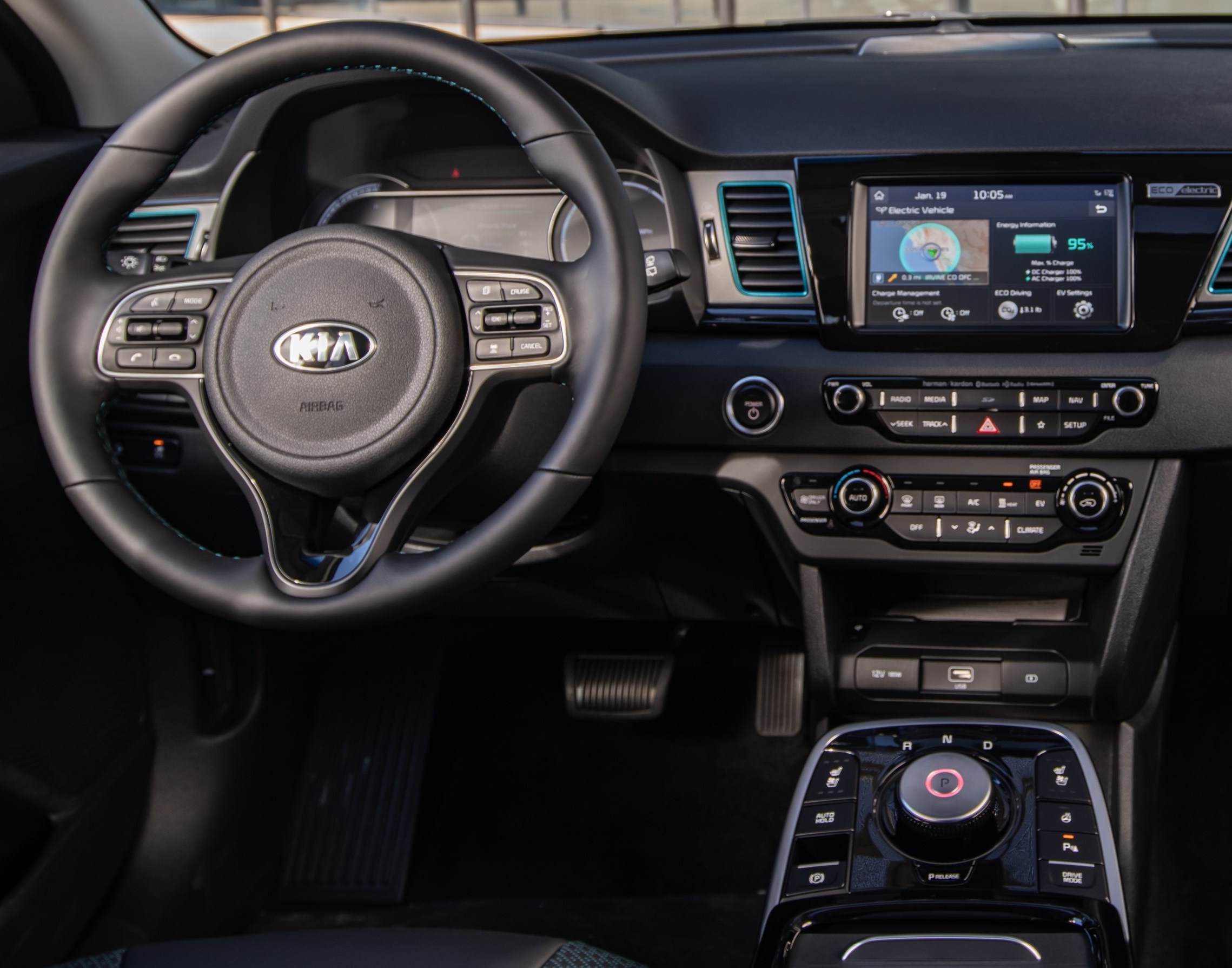 Kia’s drive software isn’t great, but I imagine most people will be almost exclusively using CarPlay or Android Auto for maps and music. For that it does work well, though I did have some freezes and black screens which were easily remedied by unplugging/plugging in my phones again.

I tried using the built-in ‘find the nearest charging spot’ software but gave up because the Plugshare app on my phone was so much easier and more helpful.

I would suggest some rear seat USB ports to Kia. We had to buy some extra long USB cords for the kids in the back. There is one hidden under the arm rest as well. There’s also a lighter port which you can use to charge an extra device in addition to the 3 USB ports included. Only one of them is for the console so you need to physically swap if you want to change phones on CarPlay.

The seats are more comfortable than the Bolt and probably as comfortable as the Nissan Leaf. One thing I love about the Bolt is getting into the higher seats and the Niro felt almost as easy to get into and out of. Looking at the vehicles next to each other, the Bolt still does ride higher, but you won’t notice a difference.

The kids had no problem falling asleep in the back on the way to the airport for our early departure.

Trunk space was quite nice but there’s no frunk. I was able to fit a very large duffle suitcase and a large backpack and could have probably stuffed some more in there. The Bolt’s trunch is surprisingly big and deep vertically but I think the Niro is bigger overall.

The premium Harman Kardon stereo is fantastic. I’d even say slightly better than the Premium Tesla sound system and the Bolt premium Bose system in my experience. They really nailed this one – great separation and bass playing off of CarPlay or even the FM tuner.

Charging with the Kia Niro EV 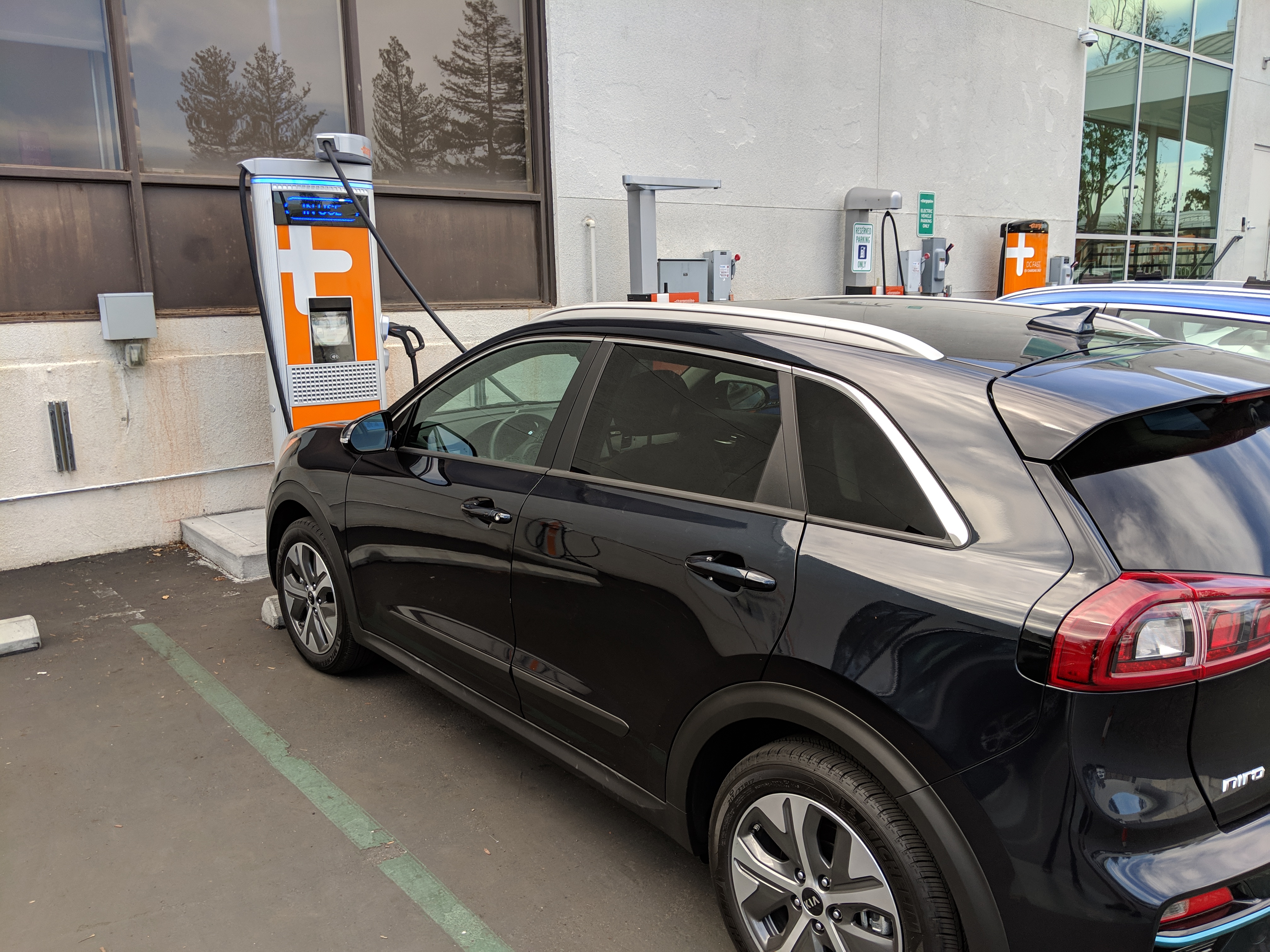 The car I got came with an orange Level 1 110V charger and frankly for most people this is all you will ‘need’ on a day to day basis. Because of the Niro’s solid efficiency, this equates to 5 miles/hour of charge out of a normal outlet. A 12 hour overnight charge will give you at least 60 miles of range, more than enough for the average commuter.

The Niro, as most EVs do now can accept up to 7.2kW of power (or over 11 in 3 phase Europe) on 240V outlets which will take the car from empty to full in under 10 hours. That means if you have a 240 at the house, you wake up with a full ‘tank’ every morning.

I want to say this loud and clear. If there are dangly plug-ins that need to be removed every time you plug in, you’ve lost the plot. Companies like Tesla and even Chevy where EVs aren’t an afterthought wouldn’t dare to have these things hanging out. But here we are: 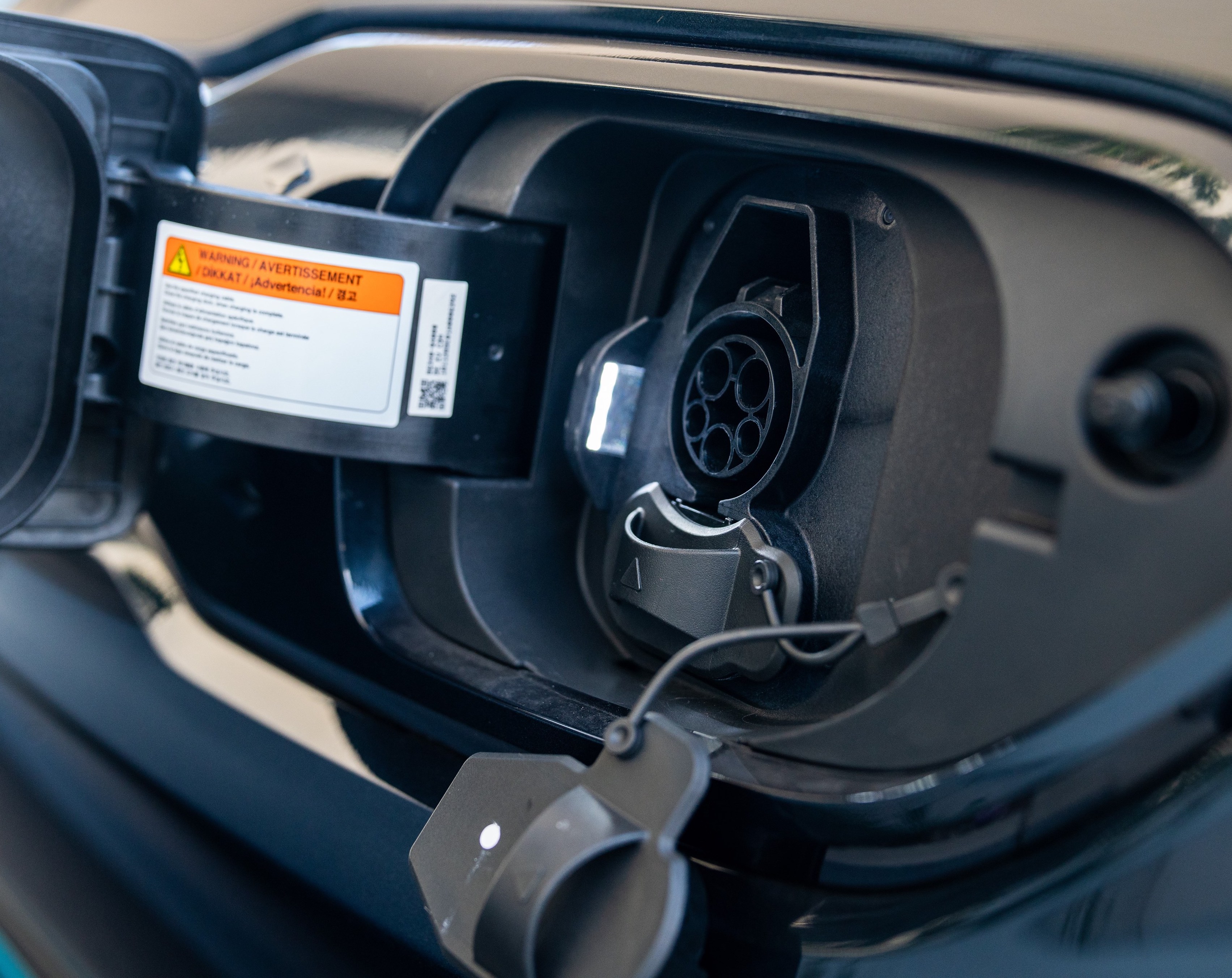 If I owned this car, I’d probably cut these off with some scissors.

DC fast charging was a bit of a disappointment. I visited one of the few 100kW CCS combo fast chargers in California which was at the ChargePoint HQ. Unfortunately, with the Niro’s incredible efficiency, I didn’t start with much under 50% of the range so I only got to charge with some of the taper already in effect. 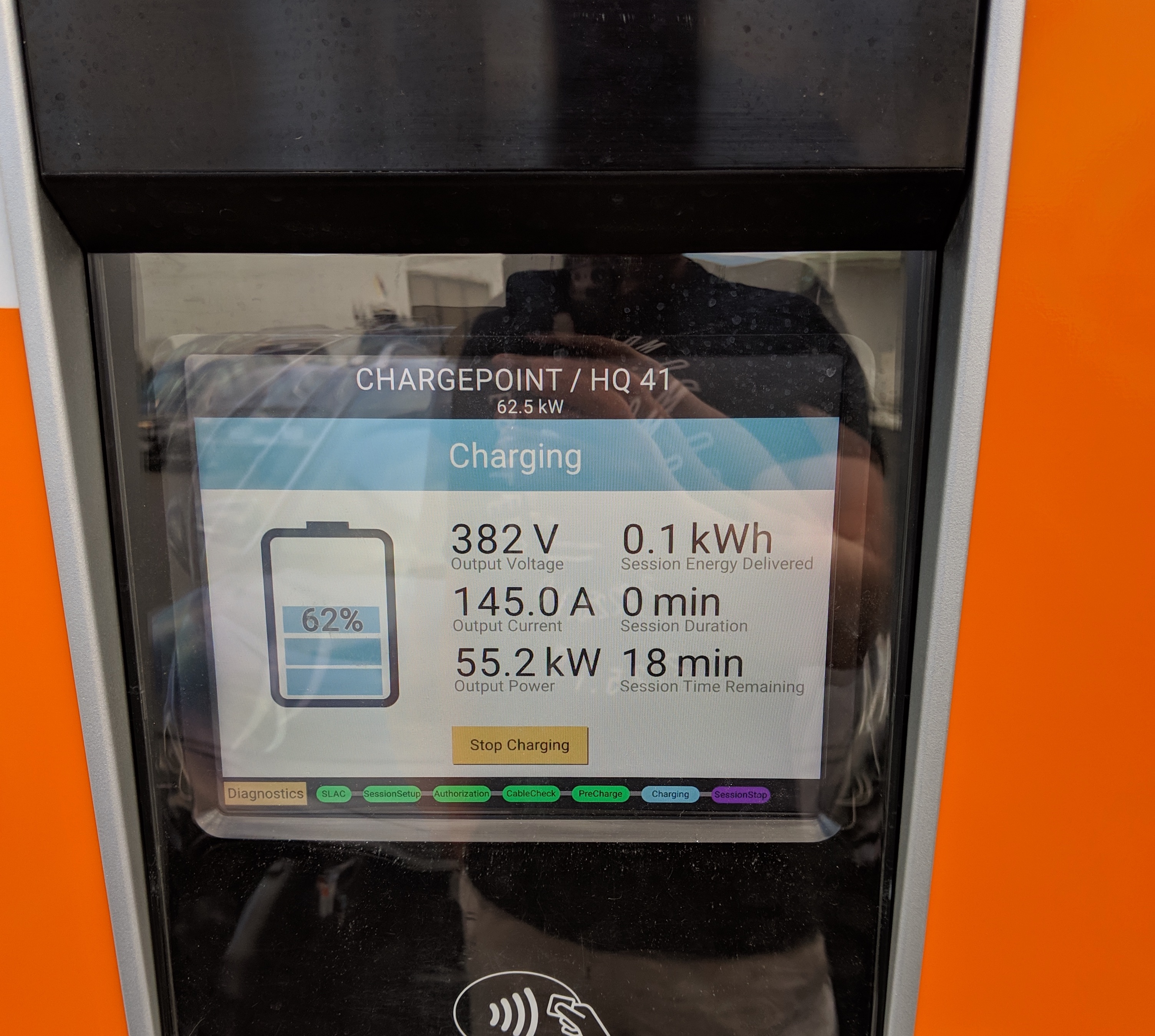 Kia says that the Niro EV will DC fast charge over CCS combo to 80% in 75 minutes on 50kW and 60 minutes on 100kW. The reason the math doesn’t work out there is that it never reaches 100kW and in my testing barely reached 70kW. The reality is that right now even 50kW chargers aren’t easy to find and 100kW ones from Electrify America, Charge Point, and EVGO are just starting to be produced. For travelling over 200 miles, you will need to do some planning. I’d suggest Plugshare.com.

If I had to choose between the Bolt, Kona, Niro, and Leaf with the same features and range, I would stick with my decision to buy the Chevy Bolt EV. Besides being available for purchase, the Bolt is straight up fun to drive. Driving the Niro is amusing at best, utility at worst. Also I love the smaller footprint of the Bolt vs. the longer Niro, particularly in my tight garage.

That said, the Niro is fantastic for the utilitarian customer it is aimed at. It is pleasant inside, drives nicely, has very long range and very decent power. The stereo and infotainment are great as is the ride height. Charging options are as good as they are going to get for a non-Tesla EV.

The problem however is that both Hyundai and to a lesser extent Kia never make enough of their EVs, nor do they market them, or sell them outside of ZEV states. That means dealers will try to price gouge and we’ve already heard of markups of this car that approach the $7500 federal tax credit – which is a real shame. A lot of people would love to drive this car.

The Niro EV is a crossover electric vehicle from Kia that gets an estimated 238 miles per charge. The starting price is $38,500.