One of the most important categories of ebikes is the low-cost, entry-level sector. What I call the eBigBox models.  Obviously, not everyone can’t afford a $7500 Riese and Muller and frankly a lot of people are skeptical on how much they will use and enjoy an ebike. So even if they can afford a few thousand dollars for an ebike, they might not want to put it all down on a category they aren’t sure about.

Last year we found a very low-priced (under $600 at Amazon) bike made by Ancheer. Overall, it made some good compromises to get down to the $600 price point but I had some issues with the build quality, the power of the motor, lack of display on the controller and size of the battery. This year a new low-cost Amazon ebike from Rattan seems to have answered many of my concerns.

Today I’m looking at the Rattan Challenger 350W ebike. It can be found for under $680 at Amazon (after Electrek coupon code 5AIDO2GB) shipped and includes free assembly at a local bike shop. I assembled mine at home however in about 15 minutes with the graciously supplied in box hex tool and wrenches. It is pretty straight forward – the hardest part was bolting the front light on.

Looking at the bike, it is a much more modern and sporty look than last year’s Ancheer with similar geometry. I love the red accents and matte frame. Rattan has also hidden away the controller and a lot of the wiring inside the frame downtube.

My powertrain concerns with the Ancheer were its low power and small battery: 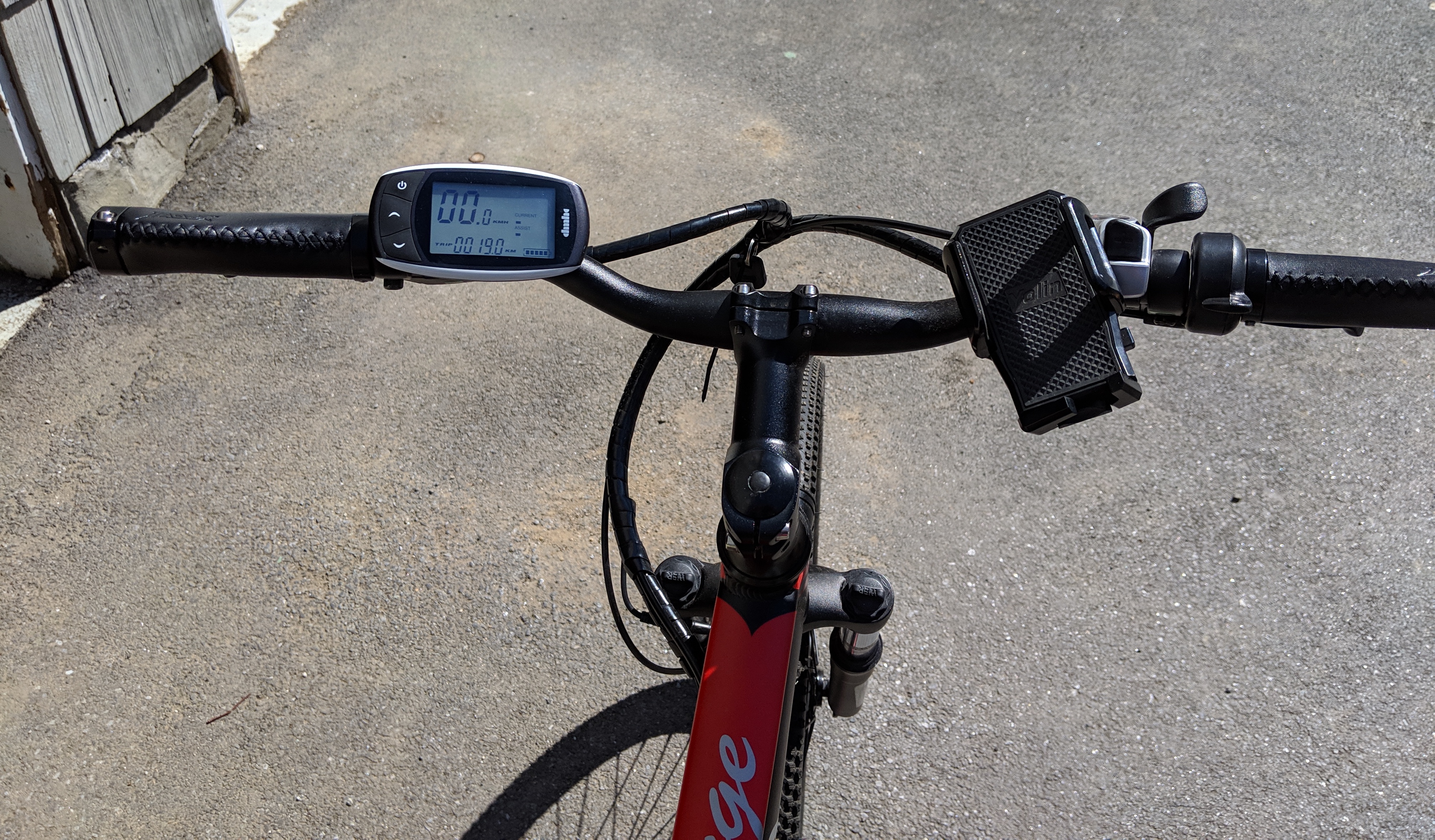 Rattan hit all of these pain points with upgraded specs:

The frame of the bike doesn’t just look sportier, and it doesn’t just hide electronics in the downtube. It also inspires some more confidence. Many of these components are still big box level but overall, the bike feels way stiffer and it rides a lot smoother than the Ancheer of yesteryear.

However, this is still a big box quality bike. Don’t expect a $3000 bike quality for under $700. I want to make sure we’ve got the expectations set correctly.

After the assembly you are going to want to go throughout the bike and make sure everything is tight, things are aligned and bolts are locked down.

So first off, it isn’t fair to compare the power of a Chinese rear hub motor watt for watt with a 250W Bosch or Brose or even a Shimano or Yamaha mid-drive motor. There just isn’t even close to the amount of torque or power on a per watt basis and that’s before we get to controllers. However, comparing the Rattan’s 350W motor to the Ancheer’s 250W motor seems more proportionally correct. Where as I could make it about a third of the way up my driveway hill from a cold start on Ancheer throttle, I made it about 2/3rds of the way with the Rattan, or another 100 feet. On a flat surface, again with throttle only, I hit 20 mph in about 10 seconds with the Rattan. It takes me another 5+ seconds to get there on the Ancheer. One note, the battery gauge does bounce around a bit depending on how much it is working. At full throttle you might lose a bar or 2 only to get it back once you coast. 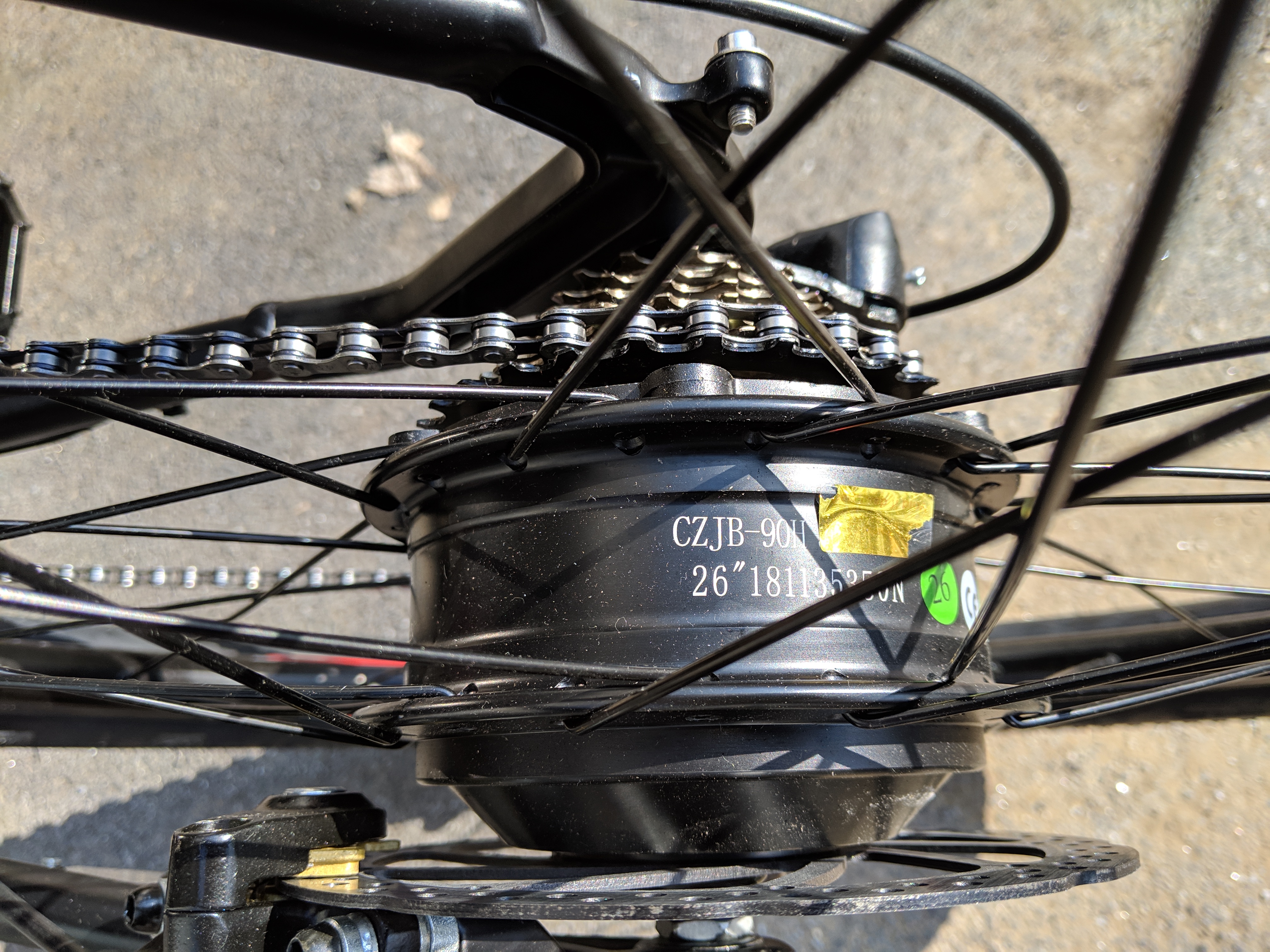 Both bikes have passable cadence sensor pedal assist that kicks in a little late and lets go a little early. Torque sensors are too expensive for this price level so you are just not going to get the same responsiveness as a bike store e-bike. Rattan has 5 levels of pedal assist while the Ancheer has 3. Over long periods of pedaling the PAS evens out or you can just use the throttle. 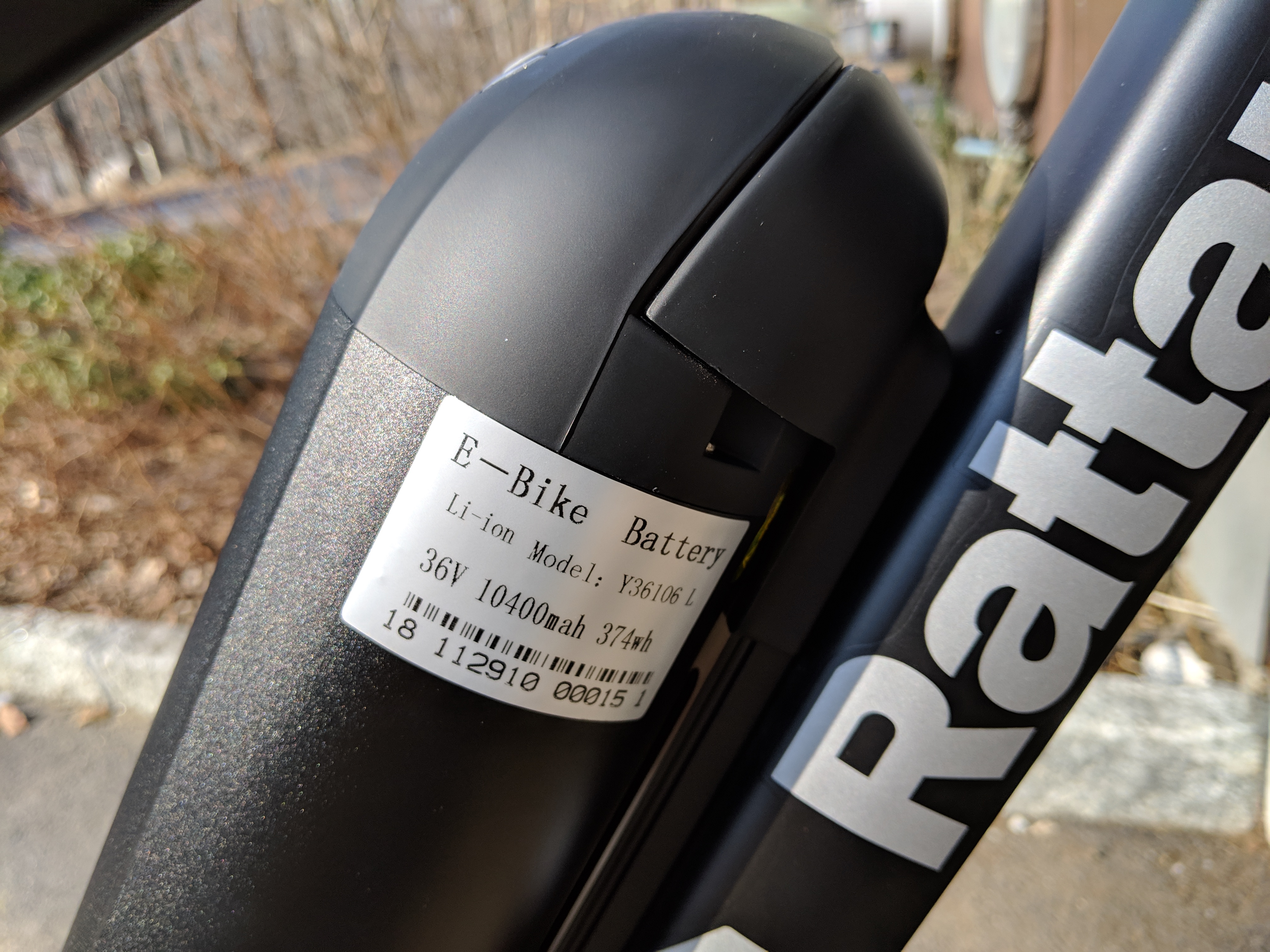 Another big upgrade here is the 36V battery. Instead of the 8Ah that the Ancheer had, Rattan has a 10.4Ah battery. The battery actually looks a lot like this one that goes for $190 on ebay or a little more on Amazon. Rattan tells me it is full of genuine LG cells which seem to perform quite well. On cold days, my 15 km (10 mile) very hilly commute would use up about half of the battery (Ancheer would be dying on the way back home). I imagine someone significantly under my 200+lbs could approach the 25 miles Rattan says you can get on throttle alone or up to 50 miles of pedal assist. I’ll just say it was significantly more than the Ancheer.

Again, these are base level components here. The Shimano/TX55 gearing is fine for this application level but I have lost my chain a few times in a few weeks. The frame is surprisingly solid aluminum alloy which feels stiffer and lighter than last year’s Ancheer. The supplied front 10W light is very bright, however the back light is charged via USB and has a push button rather than being wired into the controller. The disc brakes are the same no-name brand as the Ancheer but appear to be a size bigger. The fork, while not amazing, is a big improvement in stiffness and give over the Ancheer’s, which scared me a bit.

Overall the whole package weighs just over 50 lbs, which isn’t bad at all for what you are paying for. It comes in a typical bike box with a 2A charger and takes 4-5 hours to charge completely from empty. 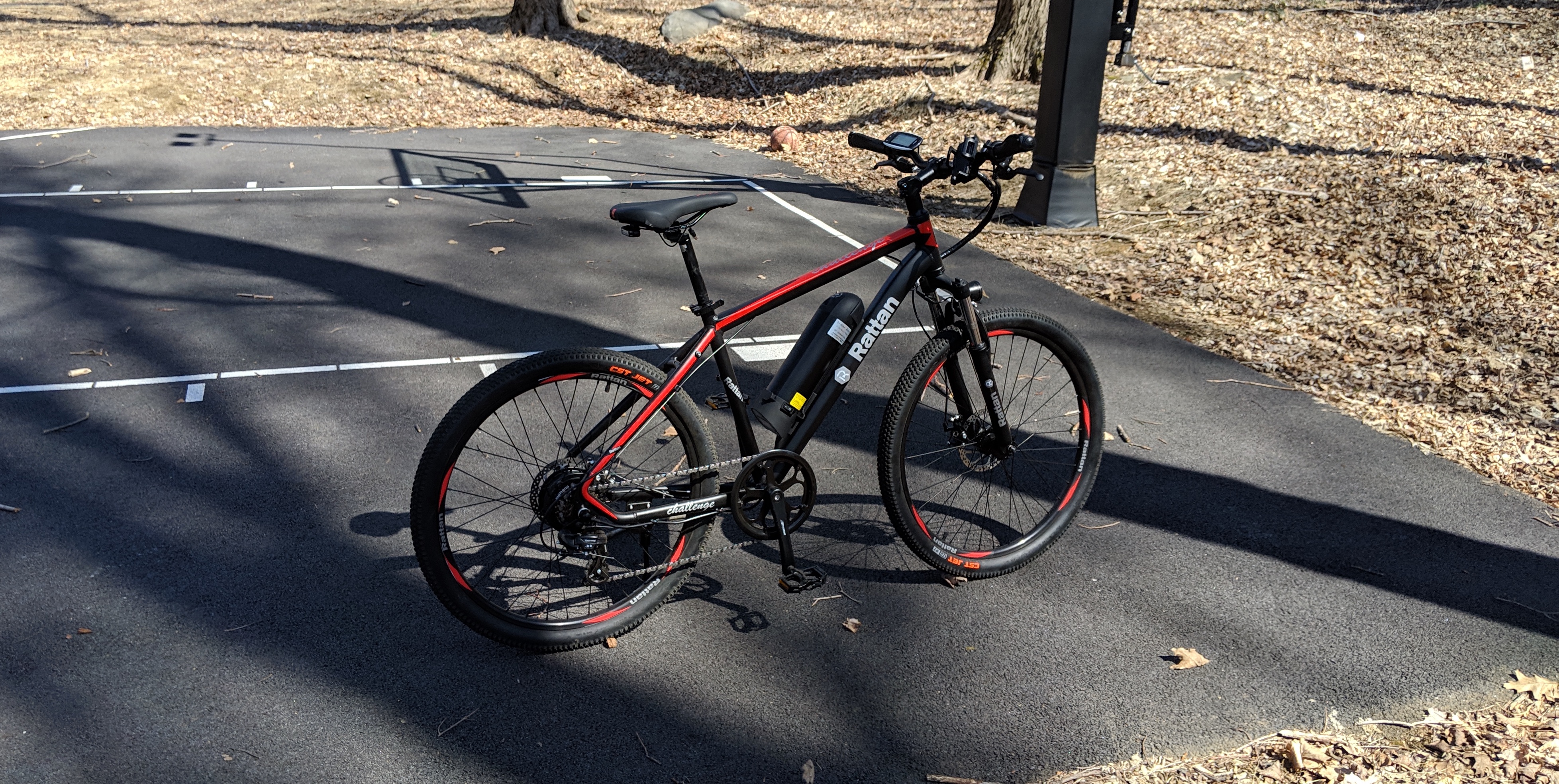 I did my commute a few times with the Rattan and while I would never give up my “bike store” e-bike for this, it was a worthy substitute. It never gave out on the big hills, nor did I have to brake because I felt the bike was falling apart. The frame is a little small for 6-foot me but it only comes in one size. I really miss the low rolling drag of having road tires however and this is something that both Rattan and Ancheer could improve upon. I don’t think many people are seriously off-roading with these bikes. Put some Schwalbe Big Bens on there! 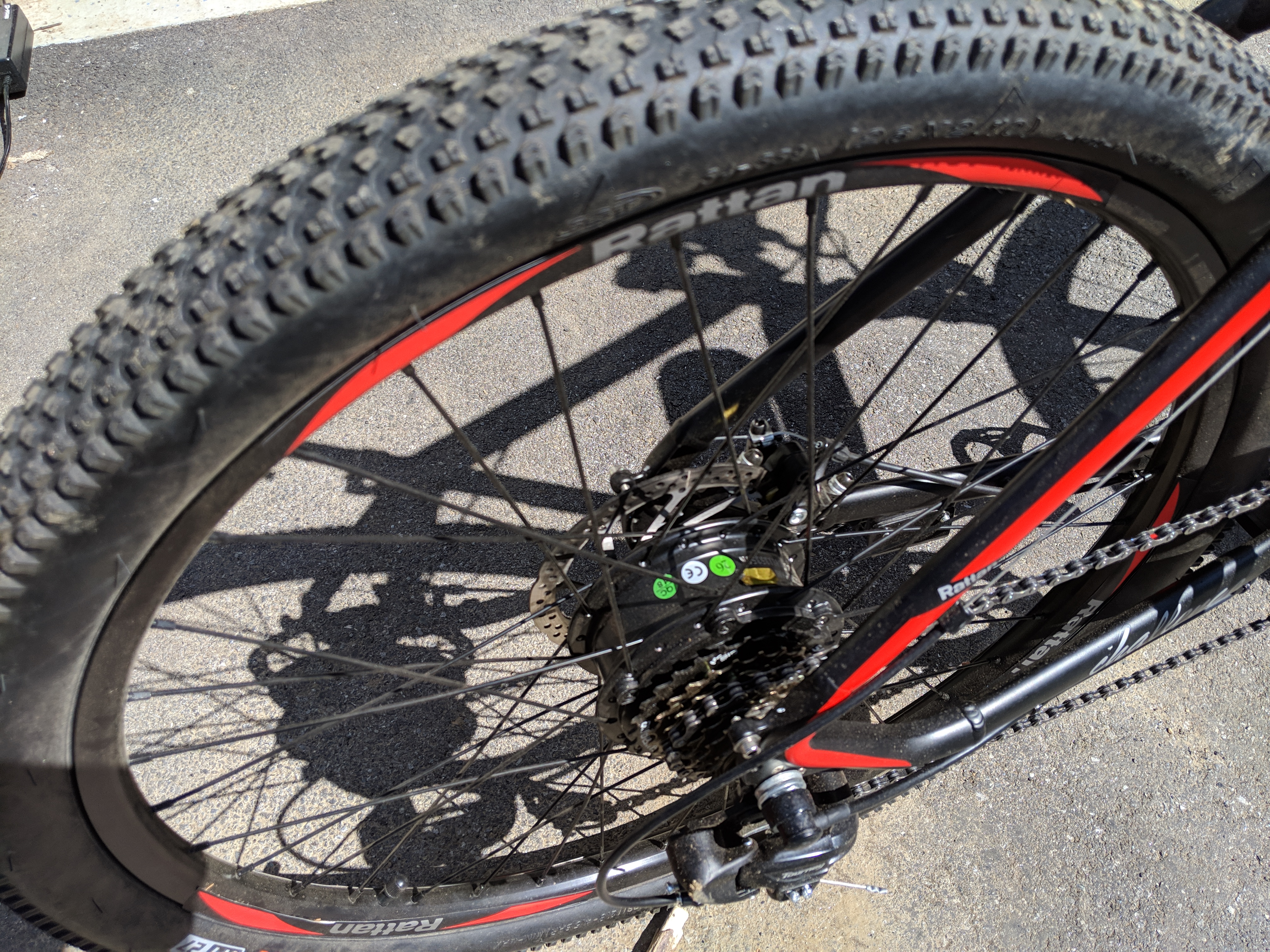 If you’ve got the cash and want to get into ebikes, don’t buy this Rattan. My best advice if you have the money is buy a bike store bike with a Bosch/Brose/Yamaha/Shimano drivetrain. We review lots of them here but I’m currently riding a $2000 Raleigh. If you only have around $1,000+ to spend, head to Luna/Rad/Sondors or at least something from a company you’ve heard of with a Bafang motor.

However, if you’ve only got $680 to spend (don’t forget Electrek coupon code 5AIDO2GB) I’d be hard pressed to find a better bike for the money than this Rattan 300W. More importantly, it is a significant step up from the less than $600 Ancheer I rode last year (and is still not a bad Amazon ebike). These are a lot of fun.