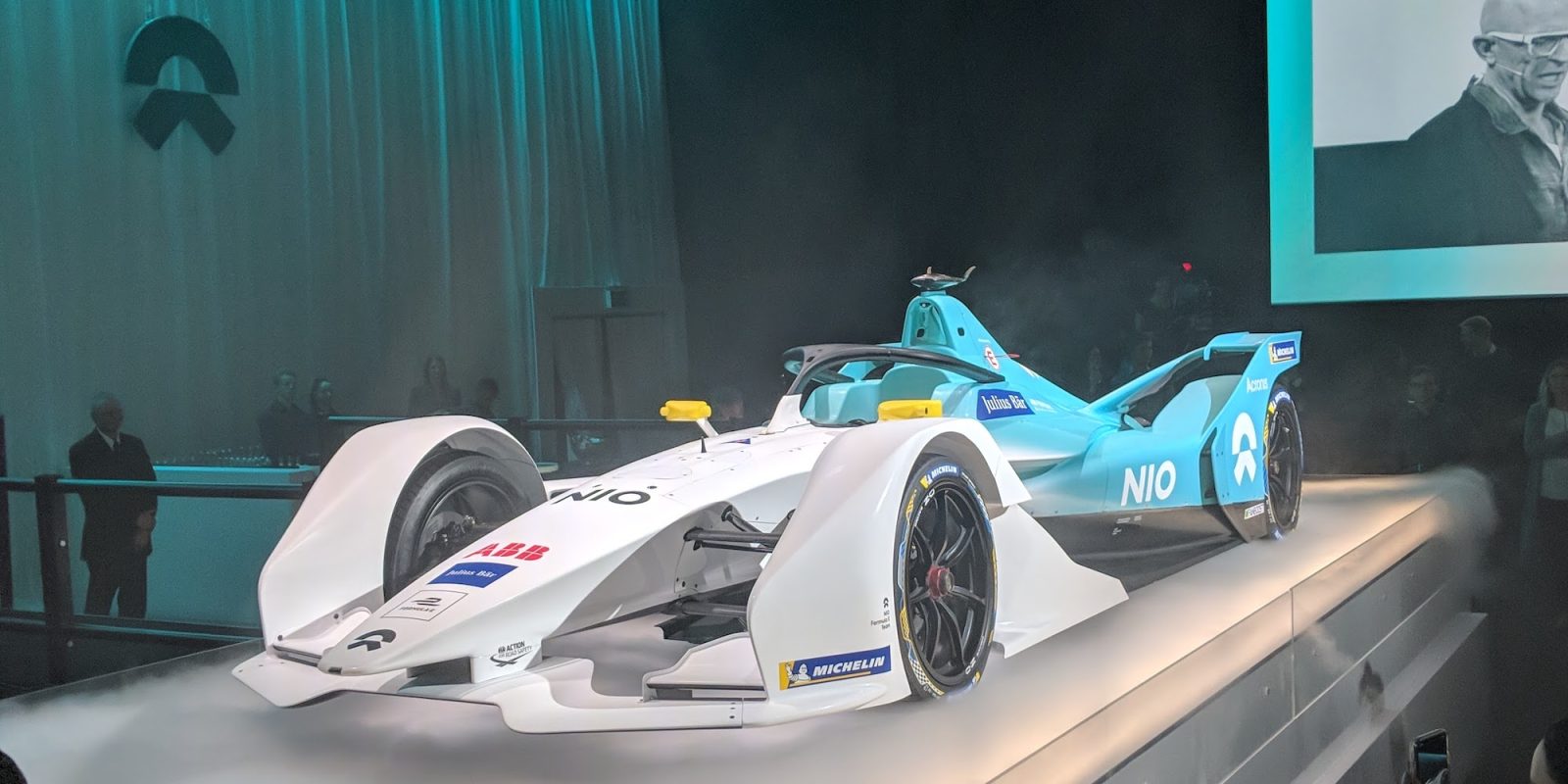 Nio was nice enough to invite us to London on the tail end of our 2018 Paris Motor show journey to witness the unveiling of its 2019 Formula E racing series car. As a background, the Chinese company has competed in the FIA Formula E championship since its inception in 2014, sponsoring the inaugural Drivers’ Championship winning team with Nelson Piquet Jr.

The company has some compelling consumer vehicles as well and we’ll take a look at them below but since they are in a quiet period after their recent US $1B IPO, we couldn’t talk much about them beyond what is already known.

Nio also got a huge vote of confidence this week from Tesla’s largest private stakeholder Balllie Gifford which reportedly bought over 11% of the automaker.

All of the Formula E teams will have the same McLaren-made battery this year but it is about double the size of the original 28 kWh battery pack (about the size of Hyundai’s 125 mile range IONIQ) to a ~55kWh battery pack. That allows the teams to race for 45 minutes plus one lap without getting out and switching vehicles mid-race like in years’ past.

Listen to a short but insightful interview I did with Paul Fickers Performance Program Engineering Director for Nio below.

Everything but the battery and the car however are up to interpretation by the Formula E teams which will increase this year to 11 and next year to 13 with the addition of Nissan (replacing Renault) BMW, Porsche and Mercedes. That means there will be some innovation and lots of experimentation with motors and inverters/controllers. The 45 minutes of driving will also require regenerative braking which has been upped to (an insane?) 250kW this year from 100kW in previous years. The new cars almost regenerate more energy than the tires can slow down the car even with the incredible downward force put on by the tail. That means a lot of strategy will be needed to reduce and conserve energy use so that the cars can not only complete the race but complete it faster and more efficiently than anyone else.

Here’s some snaps of the Season 5 Formula E car during the unveiling:

Again, were weren’t told anything new about Nio’s production cars, both are on sale and in customers hands in China at the moment. The reason the company didn’t have any new info to share is that they are still in a quiet period from their recent IPO. Nio, which began life as “NextEV” also has an autonomous car concept called Eve and an Electric charging van that goes around and charges Teslas.

One mildly interesting thing about the ES8 is that it has a battery swap option – something that Tesla has abandoned and startup Better Place went bankrupt trying to bring it to market. It also isn’t a slouch in the speed department. Some specs:

We already know that Nio plans to deliver 10,000 cars by the end of the year in China.

This was my first look at Nio’s cars in person so I snapped quite a few shots of both cars. We’re hoping that test drives will be happening soon in the US, which seems to indicate that Nio plans to be here sooner than its expected 2020 launch date.

As for the EP9, there’s hardly a more impressive electric or ICE car out there.  It beat every production car ever with a Nurburgring lap record of 6:45.90

US Investments in Nio

NIO claimed to have raised ‘up to $600 million’ in its first financing round led by Chinese Search giant Baidu. The recent $1B IPO valued the company at $5B which must’ve seemed like a bargain for some investors. Tesla’s biggest outside investor Baillie Gifford took an 11.4% stake in the company today according to regulatory filing.

I really like what this company is doing. Rather than going the Faraday Future way of creating tons of hype, they are creating cars, and quite good ones at that. While it is still very early – like Roadster Days if we are comparing to Tesla – the company is making some good moves, has some solid investors and a compelling list of products.

If you want to have a look at the dramatic Nio Formula E racer unveiling click here.