The electric motorcycle market is growing at a healthy rate with impressive new designs being introduced nearly every week. From Zero’s new line of commuter and sport electric motorcycles to high powered offerings from Curtiss and even a line of five upcoming Harley Davidson electric bikes, the future is looking good for anyone interested in two-wheeled electric fun.

Now a new Finnish company is throwing their hat in the ring with a design that sets it apart from the rest – a powerful electric motorcycle with a hubless rear-motor wheel.

RMK’s new electric motorcycle prototype is the E2, and is already taking pre-orders to be delivered next year.

Performance of the bike is in line with top-end expectations, with an electronically limited top speed of 160 km/h (100 mph).

High speed and high power is normally a range-killer, though RMK indicates that the E2 should be capable of 200-300 km (124-186 mi) of range, depending on the model selected. 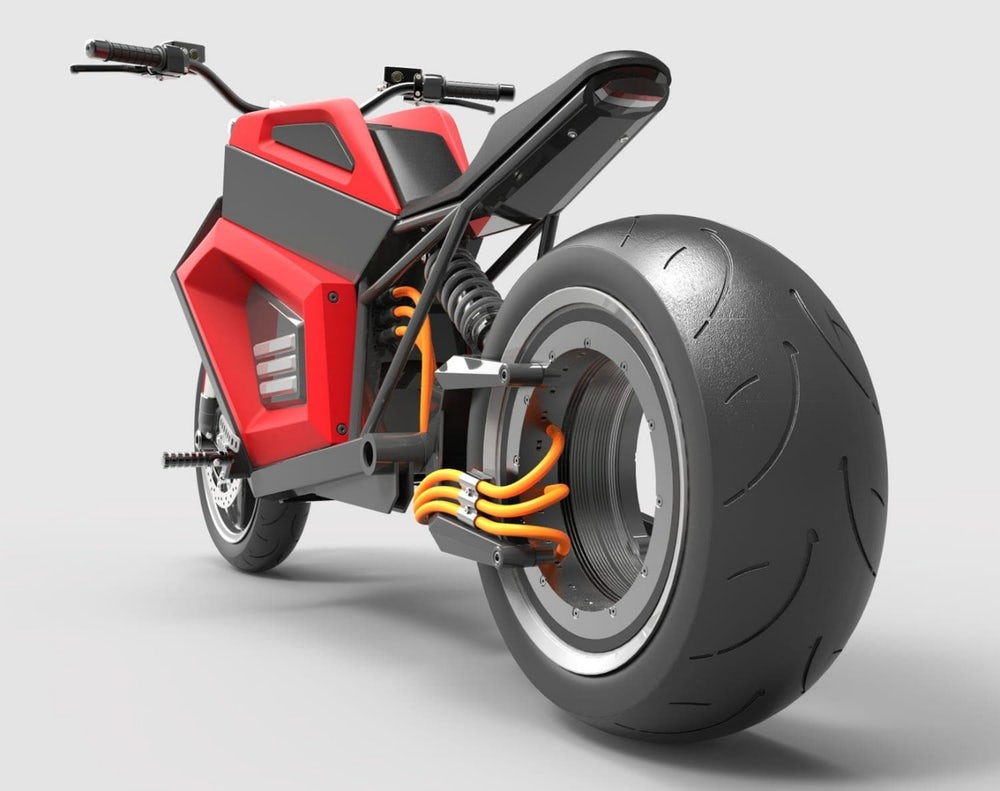 The electric motor is housed in a hub-less rear wheel. I’d normally call this a hub motor, but since there is no hub, I’m not really sure what to call this motor. It’s as innovative as it is striking.

Teemu Saukkio designed and patented the motor for RMK, which is produced locally in Finland by RMK’s manufacturing partners.

Saukko described his thoughts on the E2’s design to EVnerds:

“The bike itself is a bastard child of a naked sportbike and wide handlebar Harley-Davidson kind of bike. It looks like its a sportbike, but it is not.” 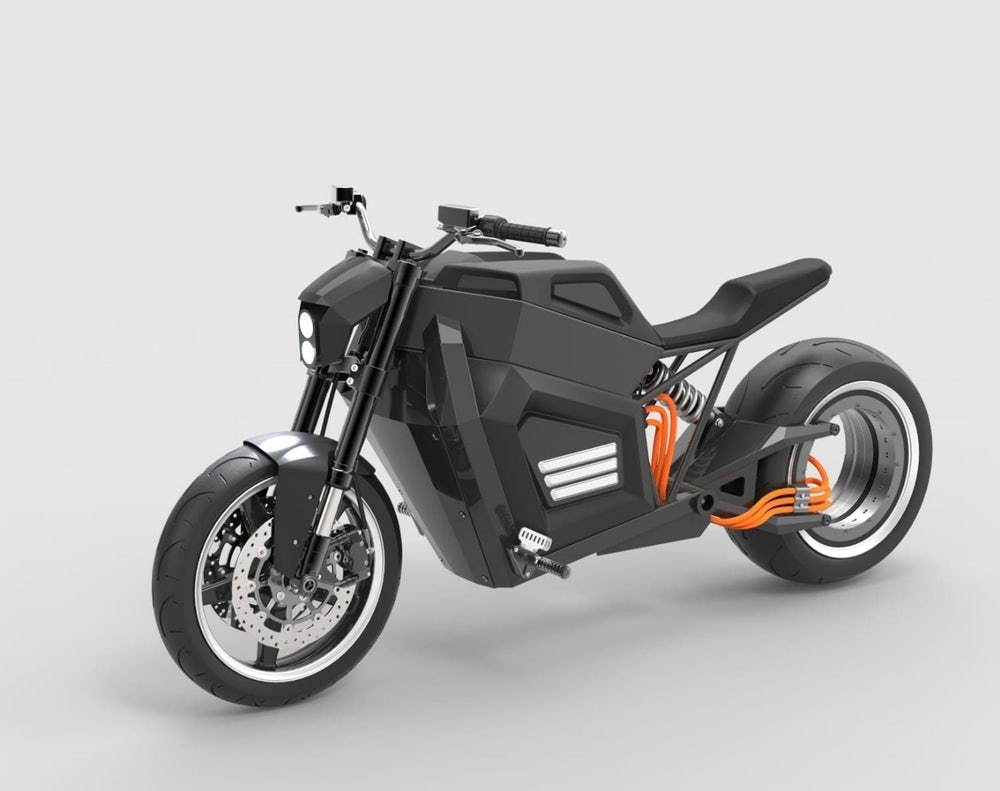 In a series of updated photos and renderings provided to New Atlas, the E2 demonstrates more of a street fighter type of stance.

Unlike many EVs which try to hide away unsightly heavy gauge wiring, the motor’s phase wires comprise a major design note on the E2. Their bright orange protective sheaths snake around the negative space under the saddle and along the swingarm to the motor’s stator.

RMK has also release prototype photos showing construction of the new electric motorcycles, revealing the 18650-based Li-ion battery. It looks like they might be using Samsung battery cells, potentially the popular 30Q or 35E cells.

RMK plans on slowly ramping up their production over 2019 to a peak of around 150 vehicles per year, with further production increases planned for 2020. Saukkio is also already planning on a followup E3 model as well, though hasn’t offered any details yet on that front.

Pre-orders have already opened for the E2, and early adopters can reserve their own for €2,000 ($2,300). But to make the E2 yours, you’ll have to tack on another €23,000 ($26,600). That’s pretty steep in comparison to some tamer electric motorcycles we’re eyeing coming out of Asia, but still cheaper than some of the other high-powered electric motorcycles produced in Europe.

I’m loving all of this innovation in electric motorcycles.

It doesn’t come cheap, but neither does most emerging tech. That’s how this stuff starts – the rich get to play with the first versions of these awesome toys, then prices eventually come down to a level where the rest of us plebeians get to enjoy the fun too.

Another great thing about seeing this new wave of high power electric motorcycles is that it will keep pressure on Harley-Davidson to get their own designs out there sooner rather than later. The company has been dragging their feet for years on EV’s, but has recently made strong commitments to electric vehicles and has some pretty interesting designs slated for release by 2022, with their first electric motorcycle coming in 2019. While I don’t think I’ll be riding a Harley anytime soon, as a major industry player, they can help move other companies and consumers towards electric vehicle adoption if they play a large role in the EV ecosystem.