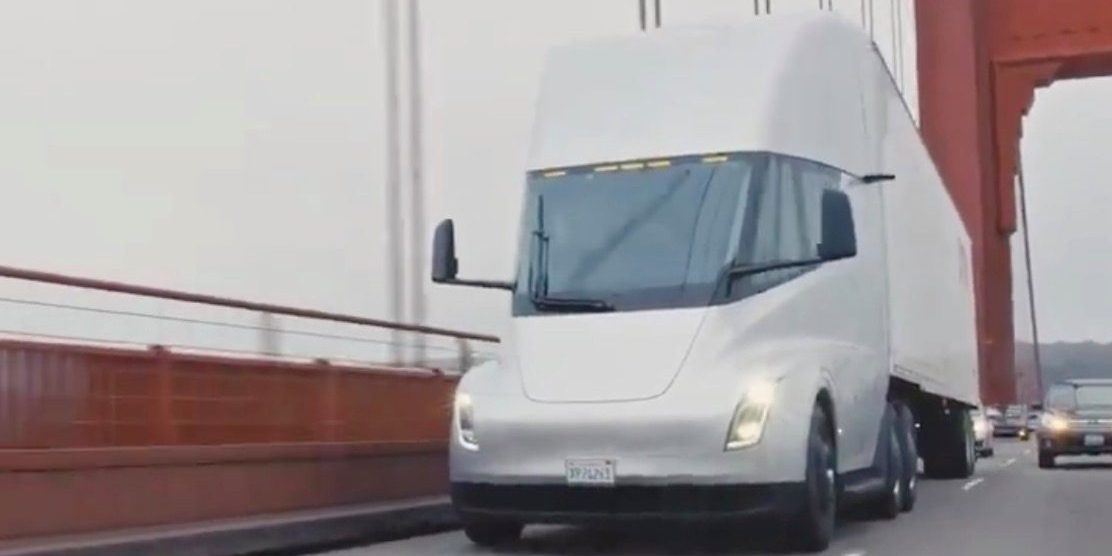 The first Tesla Semi prototypes, the automaker’s electric truck, are currently in their test program ahead of production.

This week, Tesla released some rare footage of the vehicle undergoing testing.

We have been tracking the Tesla Semi test program and the automaker is now deep into testing its electric trucks.

Earlier this year, Elon Musk announced that Tesla Semi was setting out on its first cargo trip with battery packs from Gigafactory 1 to Fremont factory. Tesla already said that carrying cargo between its two factories would be the first use of the Tesla Semi trucks and Musk referred to the automaker’s logistic costs to carry cargo between the two locations as “gigantic”.

It was first spotted in St-Louis where it visited Anheuser-Busch, the brewer behind Budweiser who also ordered 40 Tesla Semi trucks last year. The stop at the company gave us our closest look at a Tesla Semi electric truck prototype and its electric motors yet.

Later, it was spotted in Oklahoma and it created a little controversy on its way there when it stopped on the side of the road.

It made it to Texas and then in April, it was back in California.

The trucks weren’t spotted for a full month, presumably, they were off the road, before showing up at a Tesla Supercharger between San Francisco and Los Angeles a few weeks ago.

Now Tesla released a quick video of a Tesla Semi on the Golden Gate bridge going to Santa Rosa:

Santa Rose is about 50 miles away from the Golden Gate bridge – though the trip had to start at another location south of the bridge.

It wouldn’t be surprising if the vehicle started its journey from one of those locations – making the trip about 100 miles.

When unveiling the vehicle last year, Tesla announced an expected range of 500 miles on a single charge with a full load.

Earlier this year, CEO Elon Musk said that he now expects the Tesla Semi production version to have closer to 600 miles of range.

There’s still a lot of skepticism in the truck industry about Tesla Semi achieving its announced range.

For example, Daimler’s head of trucks said that Tesla Semi ‘defies laws of physics and is passing them by if true’.

The German automaker recently unveiled its own electric eCascadia semi truck to compete with Tesla Semi, but the vehicle has an announced range of ‘up to 250 miles’.

Tesla says that its electric truck could go into production as soon as next year.

That’s a short video that doesn’t show much of the truck, but I think the sound in this video is more impressive than what we can see.

At the moment, sounds from truck traffic are measured at 90 to 100 dBA. It is also believed that chronic or repeated exposure to sounds at or above 85 decibels can cause hearing loss and stress.

While the main benefit of electric trucks is obviously to slash emissions from freight transport, I think I’m almost as excited about their potential for noise pollution reduction.

The electric future just gets more exciting every day.