As we reported earlier this week, a Tesla Semi prototype made quite a trip after its first cargo test run last week.

The electric truck ended up at an early Tesla Semi customer in St-Louis and it resulted in one of our best looks at the truck so far.

Last week, Elon Musk announced that Tesla Semi was setting out on its first cargo trip with battery packs from Gigafactory 1 to Fremont factory.

Two days later, the two electric truck prototypes were seen in Fremont after having been spotted at a Supercharger station near Sacramento a day before.

Now that the trucks are moving around cargo, it’s giving us opportunities to see the electric trucks performing with trailers and some videos are quite impressive.

After this first cargo run between Nevada and California, one of the prototypes apparently set out to St-Louis for Anheuser-Busch, the brewer behind Budweiser who also ordered 40 Tesla Semi trucks last year.

People at the early Tesla Semi reservation holder were able to get a close look at the vehicle and Tony Knoblauch sent us a bunch of great up close pictures of the truck (thanks to his brother Brandon too): 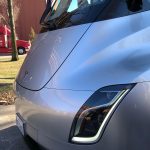 We can even see the 4 independent electric motors on the rear axles, which are supposedly the same motors in the Model 3, according to a previous comment by Tesla CEO Elon Musk.

With the Model 3 and now Tesla Semi, the automaker transitioned from AC induction motors used in the Model S and Model X to permanent magnet motors.

The automaker has recently been furthering its motor development by building an electric motor R&D group in Greece to tap into the strong local electrical engineering talent.

For Tesla Semi, the biggest unknown is the battery pack and how Tesla managed to make it so energy dense to work with the weight and cost restrictions of a semi truck, but a hyper-efficient drive unit is also part of the equation.

As we previously reported, Tesla appears to slowly be increasingly more active with its Tesla Semi test program with prototypes ahead of the start of production planned for next year. It’s giving us more opportunities to see the electric heavy-duty trucks at work and up close.

If you see one, please don’t hesitate to let us know and send us a few pictures or videos.