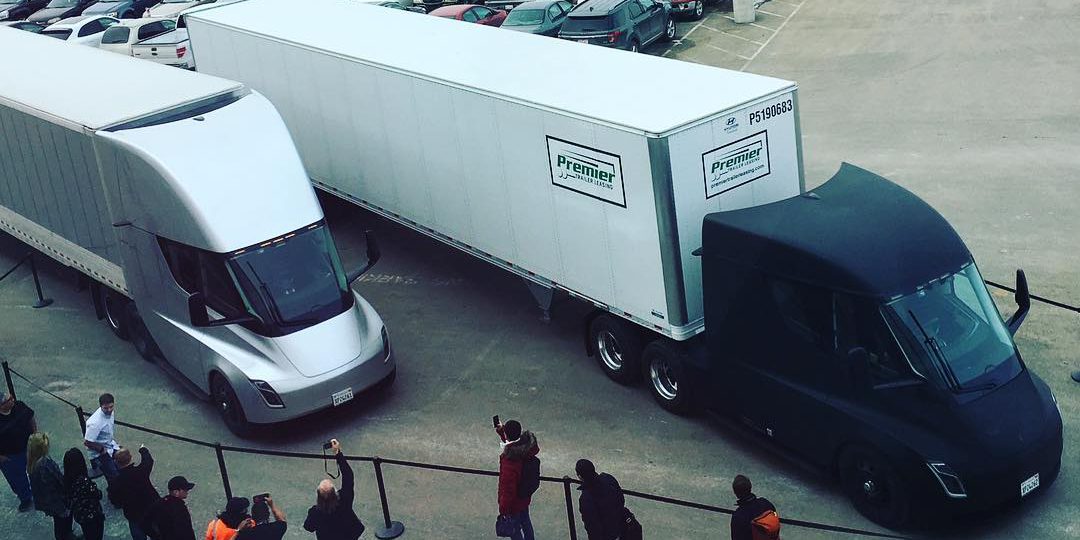 Tesla CEO Elon Musk announced that the company’s electric trucks, the Tesla Semi, are setting out on their first cargo trip transporting battery packs from Gigafactory 1 in Nevada to Tesla’s Fremont factory in California.

A Tesla Semi prototype was recently spied driving on the highway going up to Gigafactory 1 and we suspected it would be to test the route for transport since company executives already confirmed their intentions to use the electric truck on that particular route.

Today, both of Tesla’s previously seen electric semi truck prototypes were hooked to trailers with battery packs at the Gigafactory 1, where Tesla produces stationary energy storage battery packs, like Powerpacks and Powerwalls, and Model 3 battery packs.

Elon Musk shared a picture of the trucks leaving the Gigafactory today:

During a presentation about the new Tesla Semi at the annual conference of Transport and Logistics in the Netherlands last year, Tesla VP of Truck programs Jerome Guillen confirmed that the company will be using their electric semi trucks for freight transport between its facilities in California and Gigafactory 1 in Nevada:

Previously, Tesla CEO Elon Musk referred to the automaker’s logistic costs to carry cargo between the two locations as “gigantic”. He even suggested that they are considering building a hyperloop system for cargo with his Boring Company startup in order to address the issue.

But in the short-term, it now looks like Tesla Semi will do the job.

It’s a 250-mile trip and it would be the first solid demonstration of the range capacity of the Tesla Semi, which Tesla claims can travel up to 500 miles with a full load.

Though Tesla should benefit overall going downhill during a trip from Gigafactory 1 to Fremont. If they have cargo to bring back from Fremont factory to Gigafactory, that will be the real challenge.

Any truck maker should start to get very worried right about now. As we recently reported, some of them still don’t believe that what Tesla is doing is even possible.

Daimler’s head of trucks said that ‘Tesla Semi defies laws of physics and is passing them by if the specs are true’.

If Tesla can now really prove the specs of the electric truck and deliver it at the promised price points of $150,000 and $180,000 depending on the configuration, it’s virtually game-over for other truck makers since the economics grossly advantage Tesla Semi.

The next few months of testing ahead of the planned start of production in 2019 are going to be exciting.