Jaguar I-PACE Review: The 240+ mile luxury/sport/utility is everything… 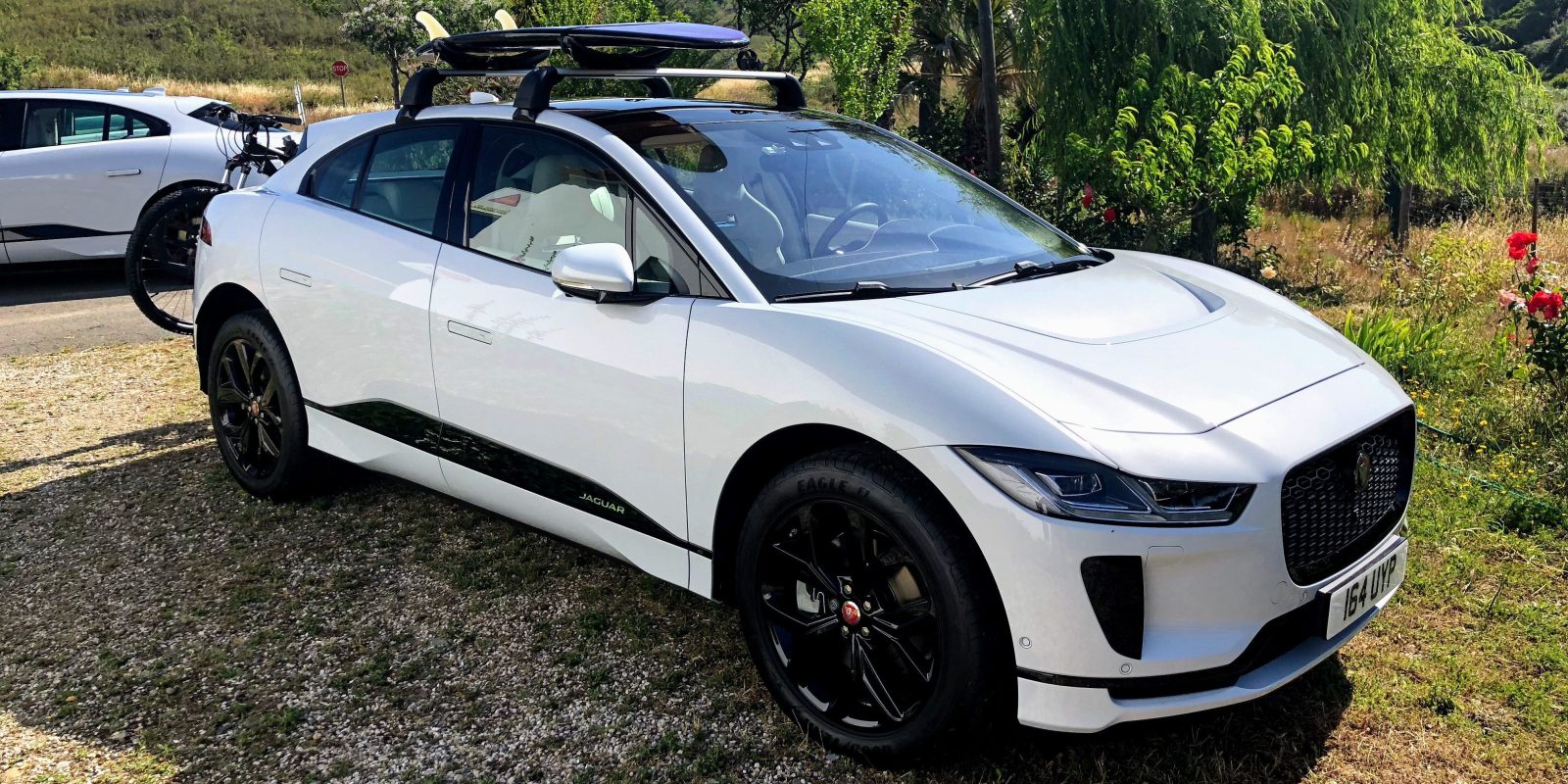 …except a Tesla killer

The first reviews of the Jaguar I-PACE came out last week and there’s a lot to digest. I won’t go through most of the information for the sake of repetition but when it was my turn this week to be in a group of 20 journalists to test the car, I noticed that I was one of the only folks with any EV experience. So we’ll talk below about the I-PACE experience from a Tesla and Chevy Bolt EV owner and electric car expert.

Note: Jaguar flew me to Portugal, put me up, provided food and was also very nice while testing the I-PACE.

First and foremost, the Jaguar I-PACE is an amazing car and embodies everything great about the promise of electric powertrains. It friggen flies off the line on the track, can torque up 45 degree dirt roads from a stop, and most importantly feels great on the open road and city streets: quiet and smooth with understated power. It is luxury, sport and practicality all in one.

It is also a Jaguar. It looks beautiful inside and out with quality components and a unique design. And most of all, Jaguar should be applauded for bringing this car to market before competitors Audi and Porsche bring their e-Tron and Taycan. 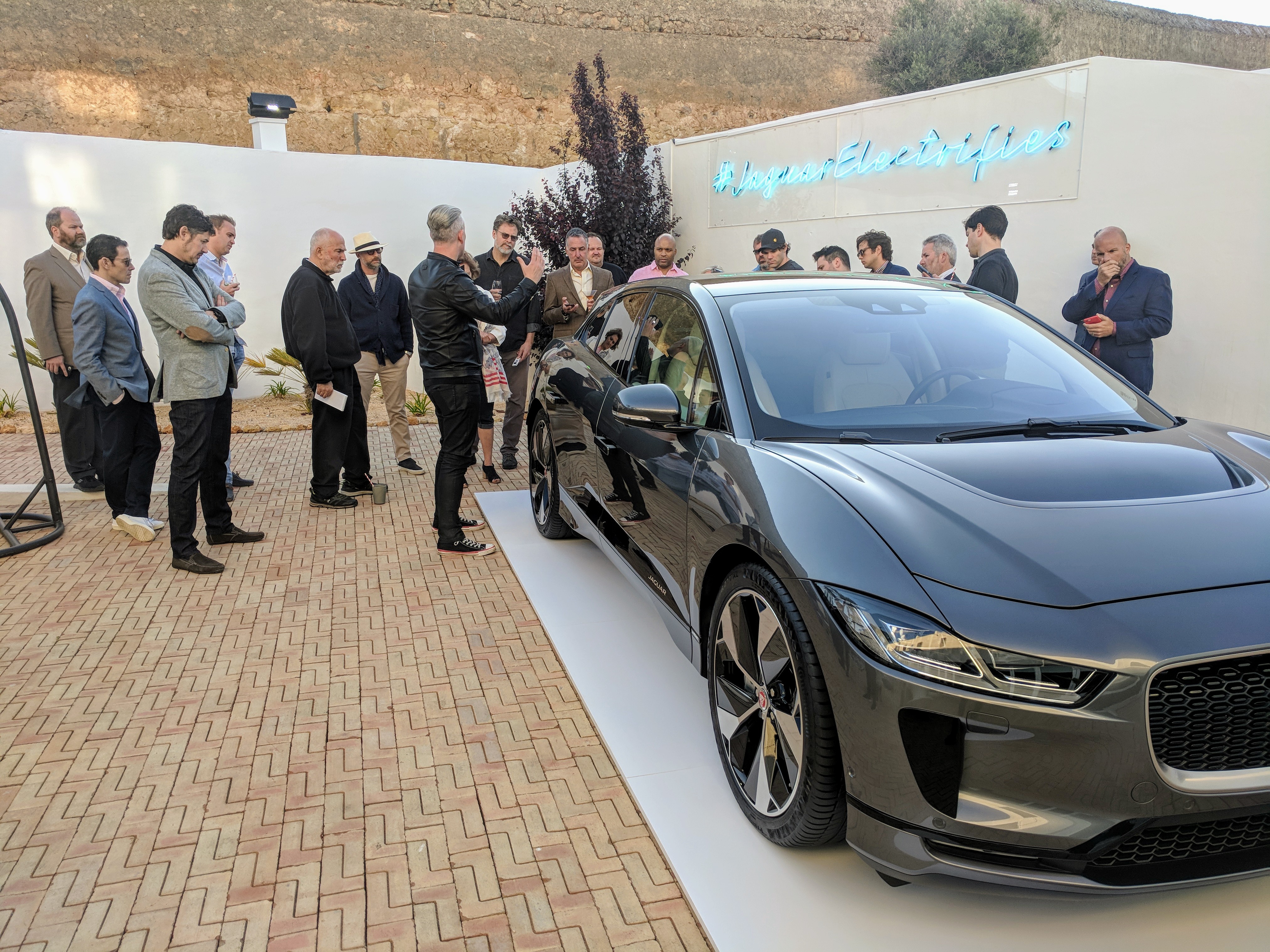 But in all the rush to compare the I-PACE to the few premium electric vehicles on the road today, the inevitable “Tesla Model X Killer” moniker keeps coming up. While its 240-mile 400HP AWD electric drivetrain certainly screams SUV, its actual body shape, internal space and ride make it feel more like a sedan.

If anything, it feels closest to a Tesla Model 3 inside, especially with its glass roof, but that’s beyond a stretch. Jaguar has beautiful and tasteful buttons, knobs and a small screen while Tesla’s spartan interior UI is simply a large touch screen with two simple knobs on the steering wheel. 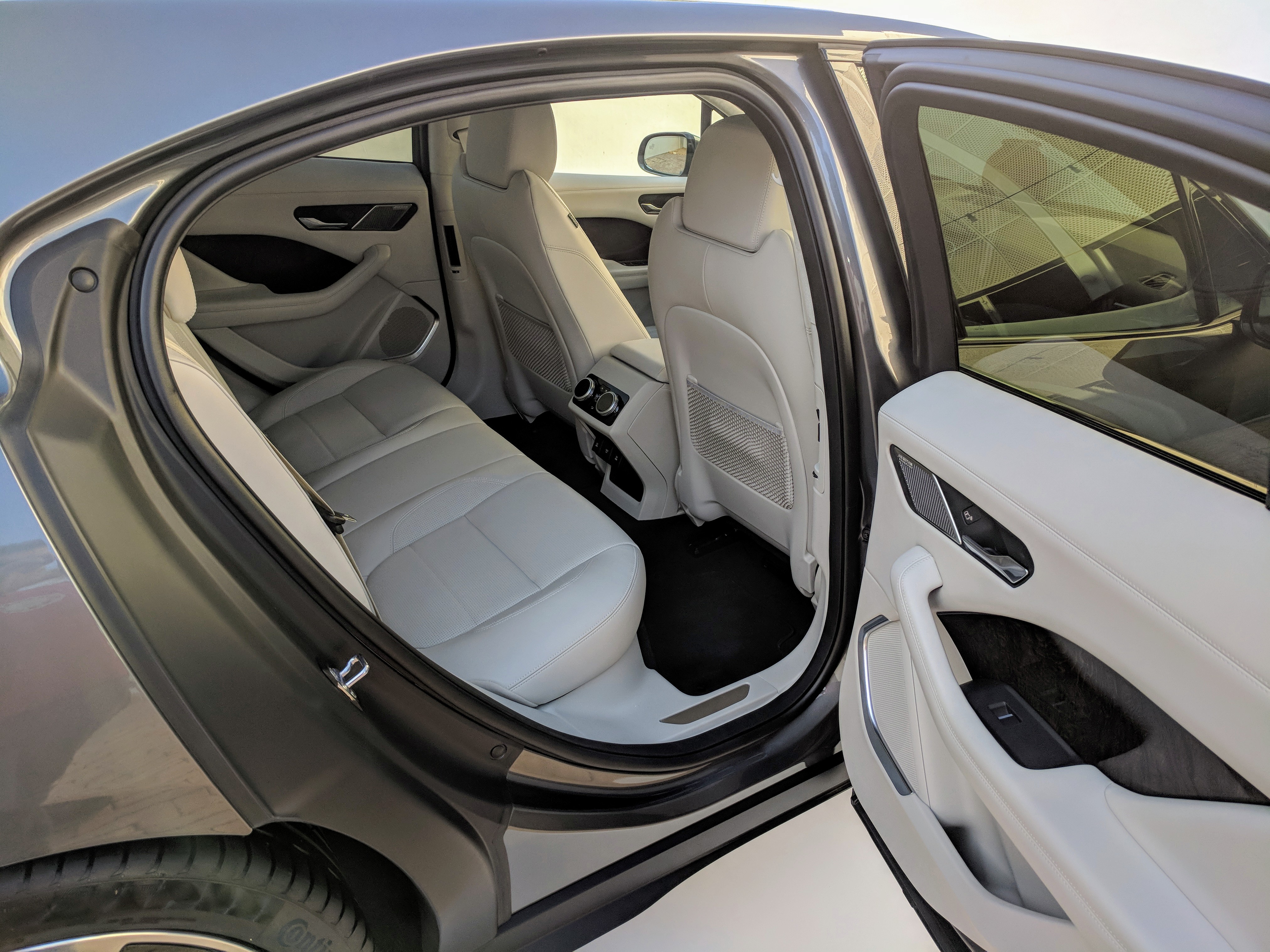 If we are thinking about the internal space and ride height, consider the I-PACE is more than an inch shorter (61.3 vs. 62.8 inches) than the Chevy Bolt EV. Then consider the huge 6-inch ground clearance (which grows in off-road mode) and the large pack battery in the familiar skateboard configuration below the floor. In between there, there’s enough room for a cabin that’s unmistakably a roomy car. 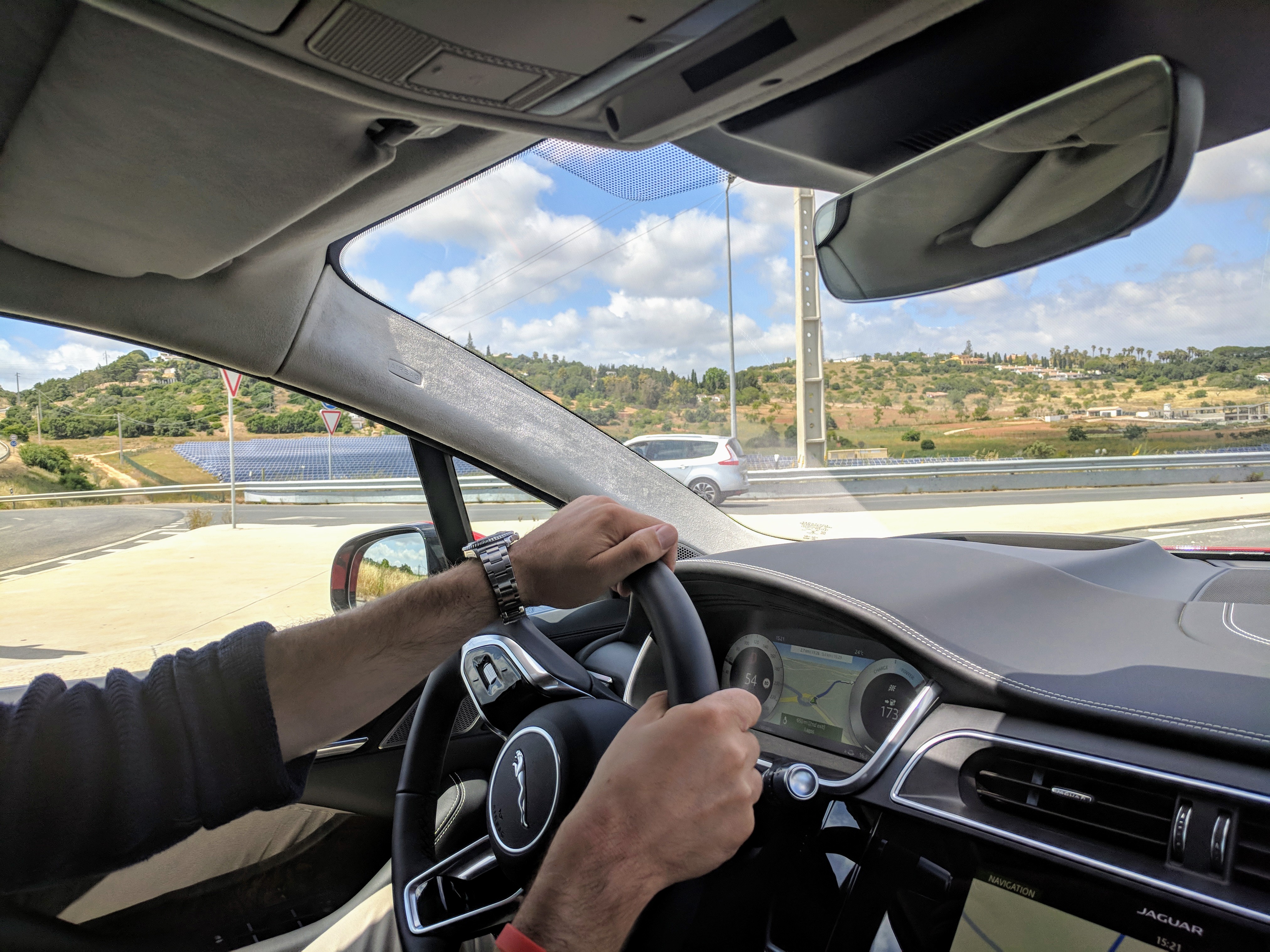 If you want a body type to compare, think: a better designed, premium Subaru with 400HP electric power.

The larger point here is that the I-PACE isn’t like any of Tesla’s current models (we’ll see what the Model Y looks like next year). If it weren’t for the electric powertrain, we wouldn’t even be comparing the I-PACE to any Tesla.

And it isn’t just skin deep. Tesla is a startup with an eccentric CEO that creates buzz with zany tweets while Jaguar is an age-old brand steeped in history. Tesla’s interior design philosophy is spartan looking forward to autonomy while Jaguar’s are full of trim, knobs and buttons.

Jaguar is relying on a nascent network of CCS standard charging infrastructure while Tesla is 5 years into building a global network of its own proprietary stations. The same goes for autonomy. While Tesla is nose down on its own AutoPilot, ask Jaguar about their self driving plans and you’ll hear about Google’s Waymo division’s recent announcement that it ordered 20,000 I-PACEs.

The point is: No one is going to mistake the I-PACE for a Tesla unless they are fresh out of ideas and need some clickbait. 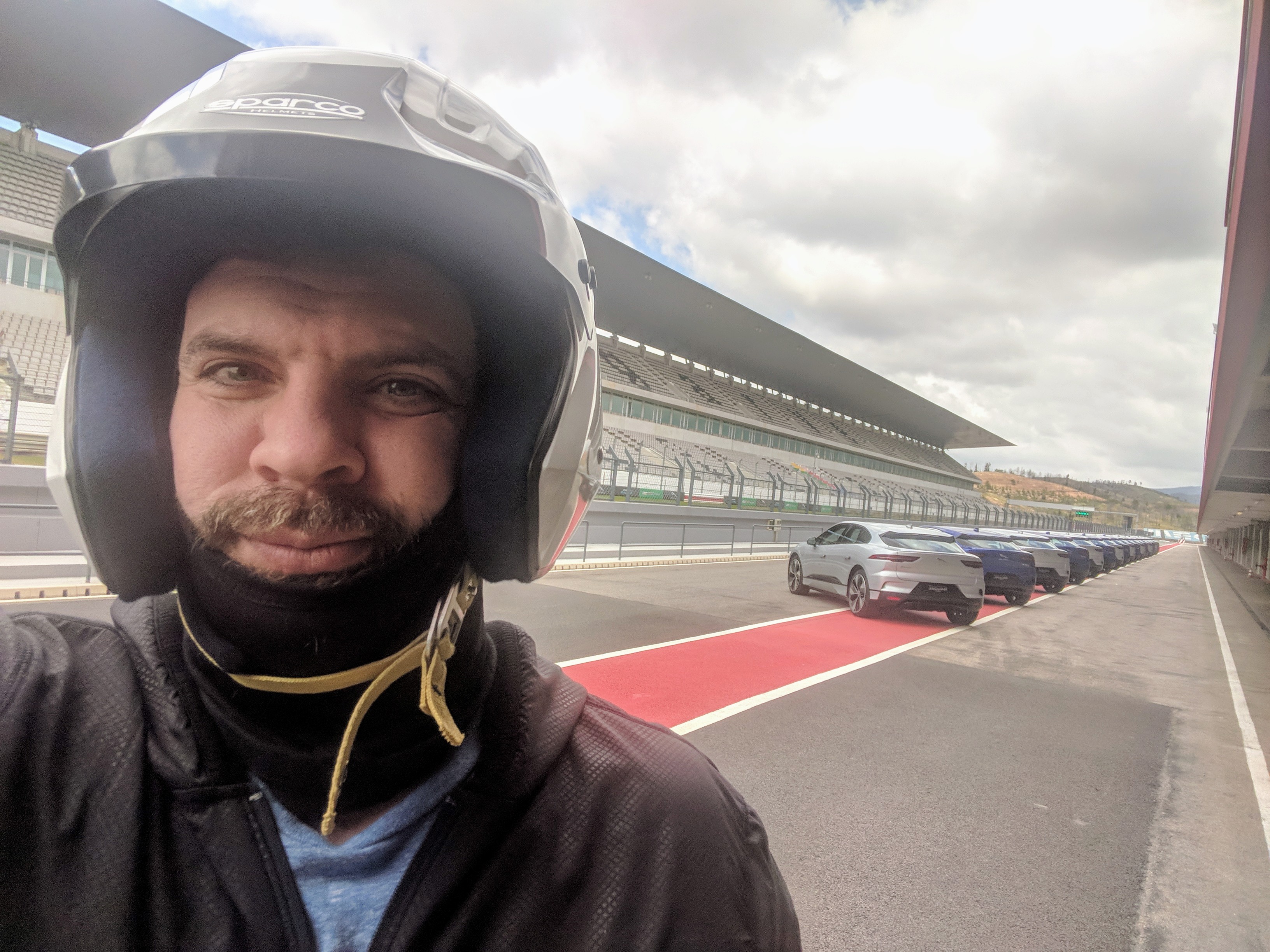 Now that we’ve gotten that out of the way, we can get to the finer details.

I want to dive into some observations I have about the EV side of the car that I didn’t see addressed elsewhere.

1. The official charging rate of the I-PACE is 100kW but I was told that a future OTA software update could push charging to over 110kW, closer to 120kW. It is hardware capable currently. That would match up with the current Tesla charging speed, though SuperCharger v3 is due out at the end of the year and is expected to double charging rates. Porche’s Taycan expects to offer 350kW charging, via their own CCS stations that can charge 0-240 miles in 15 minutes.

2. Sticking with charging, the I-PACE DC-DC converter knocks out 250A at 12 Volts from the larger 90kWh battery meaning that you can stick a 3kW inverter onto the 12V battery and run your home from it. You could also theoretically give someone in an ICE vehicle a jump. Or like 1000 jumps.

3. Jaguar won’t offer any vehicle to home or vehicle to grid services this year, but an engineer I spoke with said they were working on such things and could have something to announce later. He noted that battery to grid could save a lot of money by outputting power during high demand after work hours and charge up during low demand late night hours.

4. Jaguar’s designer Wayne Burgess talked about the I-PACE’s .29 drag coefficient and without prompting compared it to Tesla’s Model X at .24. He noted that the Model X doesn’t have proper cooling which affects its ability to do sustained track time. He also noted that the Model X creates lift which is something you don’t want at high speeds.

5. Speaking of Tesla, a Jaguar employee told me that the I-PACE would not have existed without Tesla. Others were very PR trained not to talk much about Tesla and specifically the I-PACE origin story but at this point, it is a forgone conclusion that EVs in general exist because of Tesla.

6. The 90kWh battery pack is only shielded from the road by a 7mm thin aluminum shell. It is reinforced I’m told, but I wonder if the I-PACE will have the same battery breach issues when highway debris shoots up into the underside of the car. Tesla, you’ll recall, added a titanium plate to the underside to prevent breaches and indeed it seemed to repel cinder blocks at highway speeds. 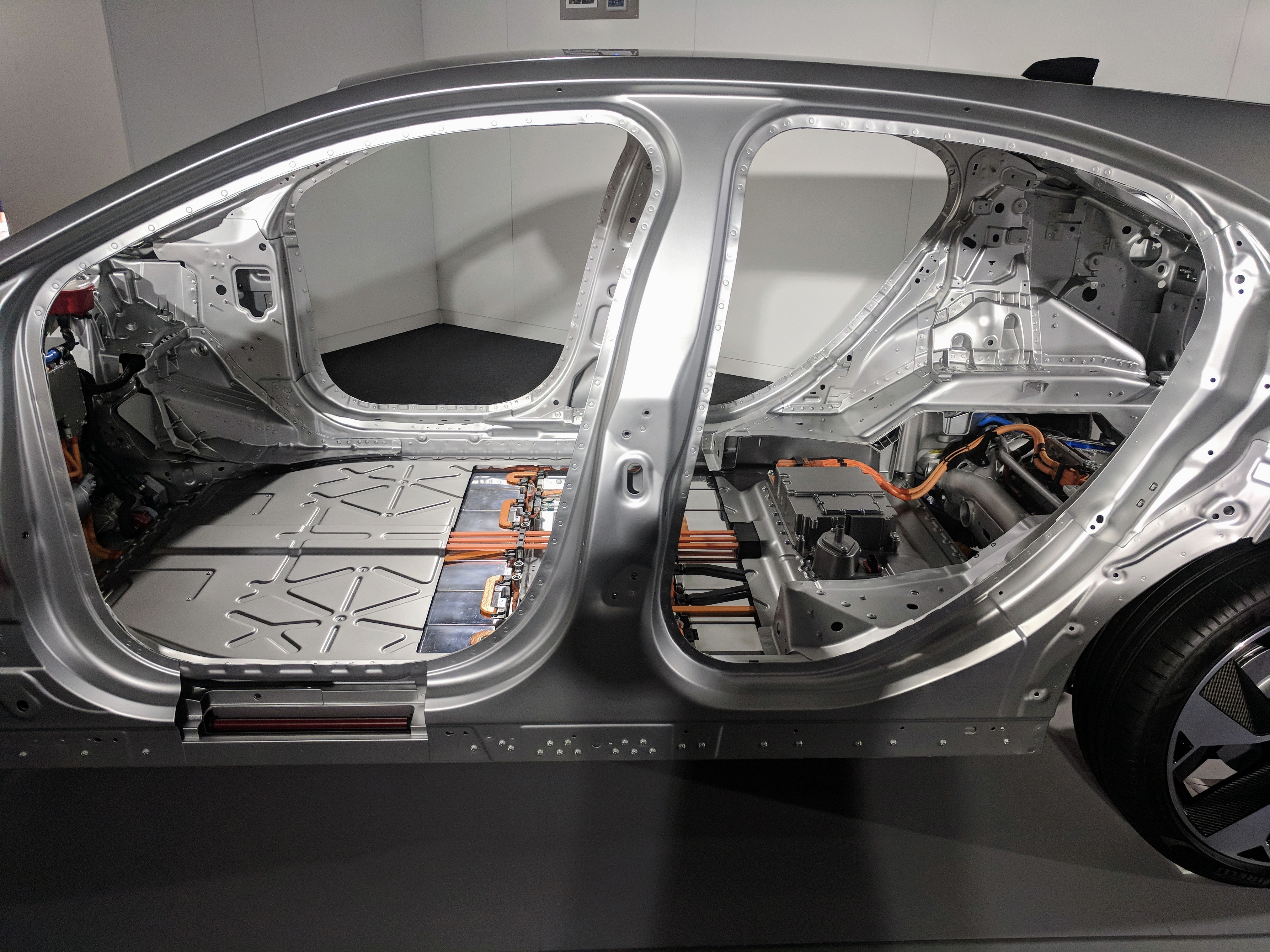 7. The I-PACE is currently doing EPA testing for range, but Jaguar thinks it will be over the 240 miles it is currently quoting. By how much isn’t certain but to compare, the bigger, heavier (but less draggy) Model X 90D gets over 255. The person I spoke to said 245-250 wouldn’t be surprising.

8. The silence on charging infrastructure and options was deafening at the event. Jaguar’s official line is that dealers will at least have L2 chargers (assuming 7.2kW or 240V 32A but unable to confirm). In my opinion, this is unacceptable. Requiring dealers to install 100kW DC fast chargers would go a really long way to show customers how they can really add miles quickly to an EV, not to mention creating an instant US charging network for the new customer base.

We didn’t even see a plug on the junket which seemed odd since charging is the number one concern that most folks have about EVs. The reason given was that European plugs are different than North American and Chinese, but reading over the EU reviews of the I-PACE, none showed any plug demonstrations. Hopefully dealers are treated to charging training or Jaguar is going to have problems.

9.  The I-PACE charges to 100% day to day unlike Tesla which charges around 90% on a day to day basis. That allows Tesla to go to a higher battery percentage on trips without excess battery degradation. I wonder if Jaguar is just not charging its batteries as high or the lithium pack design from LG doesn’t require less of a charge to hold capacity long-term.

10.  I-PACE design director Wayne Burgess on the sound that is played inside the car to tell you that you are accelerating:

11. Speaking of inspiration, the I-PACE itself was inspired by a lot of sports cars including Jaguar’s stable of classics, but the AMC Eagle wagon was also a fixture on the “inspiration board” the designers used.

Also, I made a ton of videos which we’ll add to our YouTube channel when I get back to the US. But none of it is really unique since hundreds of reporters have already posted their videos of the exact same circuit I did. The best I’ve seen is the highlight reel from Fully Charged by Robert Llewelyn, which is below.

The Jaguar I-PACE is an incredible, gorgeous vehicle that exudes all of the promise of Electric Vehicles as legacy automakers embrace the new reality. It’s not yet perfect however, and long-range charging, high cost and limited availability all need to be addressed. But, as I said at the outset, electrification allows this car stands on its own merits:

I look forward to the day when there is a vehicle worthy of comparison to the I-PACE. This is now Jaguar’s flagship vehicle in my humbled opinion.

I’ll have more thoughts on the I-PACE in tomorrow’s podcast. If you have any questions, put them in the comment section below.