Is this our first glimpse of the Tesla semi truck? 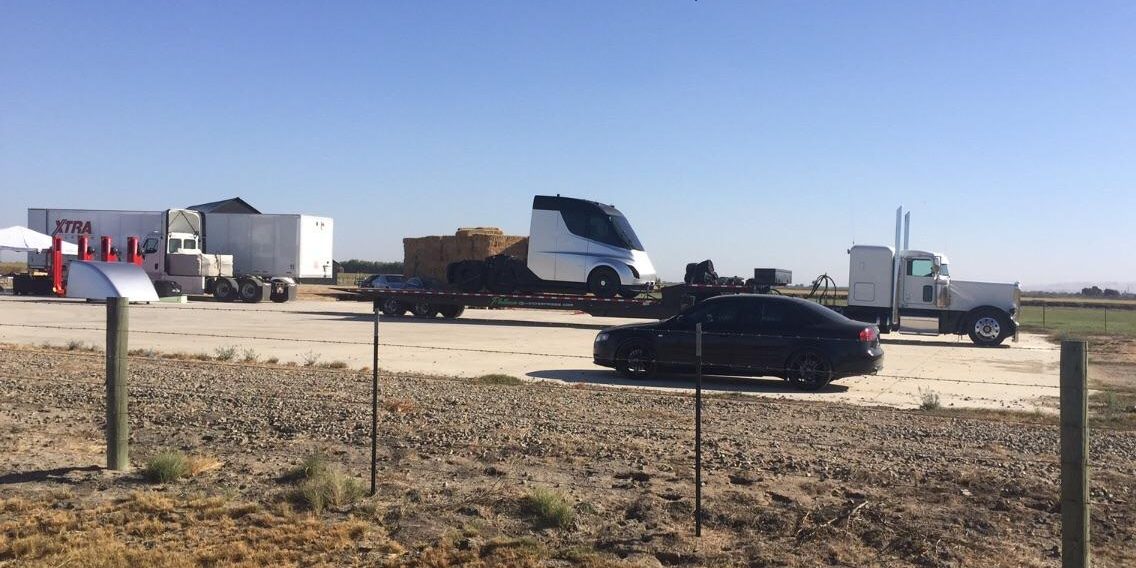 On October 26th, Tesla is set to unveil an all-electric truck which will surely shake up the trucking industry.   Details on the truck are light so far, and all we’ve seen from Tesla officially is one teaser photo.  The event is right around the corner however, as yesterday Tesla sent out a “save the date” email to owners who have reached 5 referrals.

So despite having few details, today we’ve seen our best tip yet.  On reddit, a user posted a photo which we can’t quite confirm the source of, but is reportedly from “an undisclosed place in California where they test Tesla vehicles.”  While we can’t see any logos or other confirmation that this is the actual Tesla truck, it certainly looks like it – the headlights and fenders match up, the nose looks like it doesn’t have an engine in it, and the angle of the windshield looks similar to the teaser photo.

Spy shots are a common thing in the automotive industry, because inevitably cars need to be tested before release, and in order to get real-world experience you can’t just test cars indoors.  Most manufacturers will wrap their cars with confusing patterns so as to hide aspects of the car’s design before release.  We’re not sure why Tesla decided not to do that here, as they have done it before.

So what can we glean from this single photo?  Well, first of all, the design definitely does look “futuristic” – particularly compared to the other semi tractor visible in the photo.  It’s common for semi tractors these days to have aerodynamic shrouds to reduce drag and thus reduce fuel consumption, but Tesla’s design goes a step beyond other designs on the road today.

The main difference between Tesla’s design and nearly every other traditional semi tractor – including the prototype electric/plug-in hybrid tractor recently revealed by Cummins – is the lack of a large engine compartment.  This engine compartment is, of course, wholly unnecessary in an electric truck, as the motors will likely be located between the axles as is the case on other Tesla vehicles.  By removing this engine bay area, Tesla’s design will be more aerodynamic and perhaps also be able to offer a more roomy cabin for the driver, which is a necessity if Tesla is aiming for the long-haul trucking market.  Or perhaps the extra room will be used to store batteries.

The truck in the photo does look slightly different than the teaser, in that the real-world photo seems to be lacking height.  However, on the left side of the photo there’s a large silver object sitting on the ground.  It looks like this might be one of those “aerodynamic shrouds,” intended to be placed on top of the tractor to reduce drag from the trailer.  Since the tractor is not currently towing a trailer in the photo (and in fact is being towed itself), it makes sense that the shroud would be off in this instance.

Tesla’s truck also looks like it may have aerodynamic wheel covers, much like the base Model 3 – but no word on whether they can be removed.  And for further aerodynamic benefits, it’s even missing side-view mirrors, like in the teaser image.  It’s hard to imagine that it will make it to production like that, though.

Given all of these aerodynamic features, it’s clear that Tesla is aiming for long hauls, rather than the urban freight routes which Cummins is targeting with their prototype tractor.  Tesla is going to have to squeeze every possibly mile out of their batteries to make their truck last on long haul drives, and a few percent aerodynamic drag improvement here and there can make a big difference.

The design is certainly futuristic, especially in contrast to the “classic” look of the tractor it’s being hauled by.  It’s possible that the short nose will rankle a few of the more “traditional” types, but that’s nothing new for Tesla given the design revisions they’ve gone through over the years in an attempt to make the public more used to cars without grilles.  But it’s clear from the design that Tesla has put a huge premium on aerodynamic performance, which makes sense, as semi trucks push a lot of air and any aerodynamic benefit will cut down on battery cost and weight, and increase range which is important for long-haul trucking.

What do you think about our first look at the Tesla truck?  Let us know in the comments.