I’m very excited to announce that I’m going to be going to LA for the Tesla D event launch and will be liveblogging it as it happens. Come back here Thursday evening at 7PM for all of the excitement.

We know a few things about the event, I’ve heard whispers on some other stuff, and I’ve got some learned speculation on other possibilities that might be announced. Here we go…

The D almost certainly stands for “Dual Motor AWD” and will be the platform on which Tesla announces a new Model S named the ‘P85D’ and the new-look Model X, which will have two dual motor configurations: 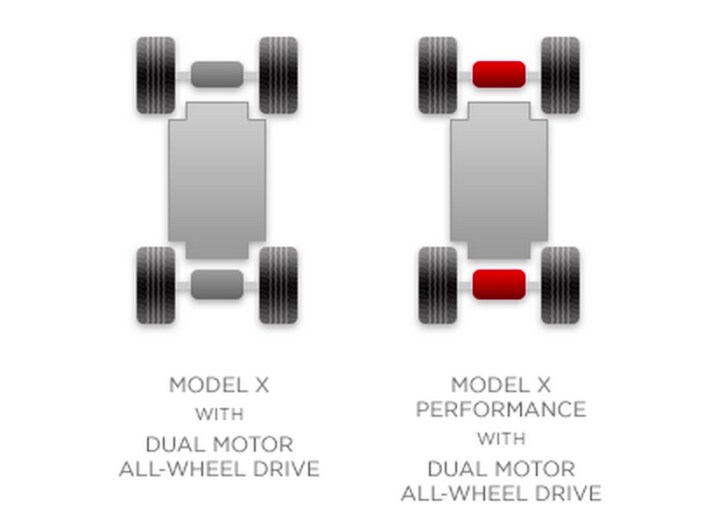 Besides all wheel drive (AWD), the P85D will boast incredible 0-60 numbers. Right now, the constraint on acceleration is due to the inability of the rear tires on the P85 model S to keep footing during acceleration (that’s what traction control is for). Tesla employees have told me that they expect the acceleration of the AWD P85D to dip below 4 seconds and even below the 3.7 seconds of the Tesla Roadster built on top of the Lotus chassis.  I don’t expect Bugatti Veyron numbers, but anything less that 4 seconds should blow people away.

It is useful to look at what Elon Musk said at the Model X reveal above (in fact the whole video is likely a prelude to tomorrow). There are a lot of advantages to dual electric motors and adjusting power to all four wheels including turning radius and feel, traction control and performance.

The downside? As you can see from the image above that front motor and gearbox unit is going to eat into “Frunk space” which will probably make the front hood more of a traditional motor access panel than a storage space. Although, in the video below Musk said there is Frunk space. For many people, the tradeoff will be more than worth it. Being Fall right now in the northeast we are all thinking about winter and how we’re going to get up the ski mountains (or in my case out of my driveway). A Tesla with AWD will be welcomed in many circles.

About that Model X:

Elon Musk, during the last earnings call answered a question about the Model X saying:

And of course this is Model X. So, I should say that the production version of the Model X actually looks different from this, it looks better.

One of the things that drive me crazy about cars is that very often you’ll see kind of the show car or demo car and then the production version is some much worse version of that. And at Tesla whenever we show of a car as a demonstration item the production car will always be better than what people saw. And now sometimes that takes a lot of efforts and it’s very difficult and that certainly is the case with Model X, but we have two choices which is either produce an amazing car that I think is going to blow people away or produce a pretty good car. And we want to have amazing car that just blow people away. So in the case of Model X that’s just taken a bit longer than we would have liked in particularly getting the buckling door right is extremely difficult and then things that you maybe wouldn’t expect also very difficult like the second row seats are quite a challenge because what we’re aiming for with the Model X is that when you open the buckling door you have the second row seats were essentially framed and we want that to feel like a work of art like if you open up the door it should give us amazing experience. I mean it may sound a bit silly but it should just feel like — And then the seat, I mean it’s just the seat but we want the seat to be like feel like a work of art like something you could have in a museum I mean that’s where we’re going for with the Model X since bloody hard.

I believe we’re at the point where Tesla has to start showing the final production version of the Model X.  Assembly lines have to be built, marketing materials have to be made and submissions to govt. organizations have to be done with the final look of the Model X has decided. Therefore, lots of people inside and outside of Tesla over the coming months will have their hands on the final look and so Musk and Co. will likely want to get ahead of any possible leaks. Musk has promised to keep the signature “Falcon Wing” doors, but I’m not sure government organizations will let Tesla continue to use the rear view cameras that replace the mirrors (which cause a lot of extra drag to the very efficient Teslas).

I’ve heard second hand from one source that the new Model X design is a big departure from the current tall Model S-esque look. Most prominent was the rear which looks more like a truck or wagon back  than a sedan, which was needed for extra adult headroom for the third row seats in the rear.  This has a marginal effect on drag and should help differentiate the look of the automobile. People seem to want SUVs and crossovers, so a look like that should be a benefit.

Musk said that 90% autonomous driving was attainable next year in an interview earlier this month, but he didn’t explain exactly how this will work. Initially it will be in increments with the newest Teslas rolling off the assembly line getting rear -view mirror cameras and the ability to track speed signs.

A TeslaMotorsForums member found some new features in the new Model S 6.0 manual. The first, Speed Assist, actually captures speed limit signs as you are driving around and tells you via the speedometer display how fast over the speed limit you are going. It also appears to geocache these from other Model S owners into a database from which Tesla can pull and confirm the speed limits.

The ‘Lane Departure’ feature is a little bit more useful (below). Like in some other cars, it detects when you are drifting into another lane and warns you.

Both features become available when the car is travelling over 30 miles per hour.

Analysts have even seen the new hardware Model Ses coming off the assembly line with Semi-Autonomous-Driver-Assistance System (SADAS) hardware ,which hasn’t yet been activated by software.

That’s all for now…of course there will be a few surprises and we’ll post any late-breaking news. Hope to see you all tomorrow for the show.