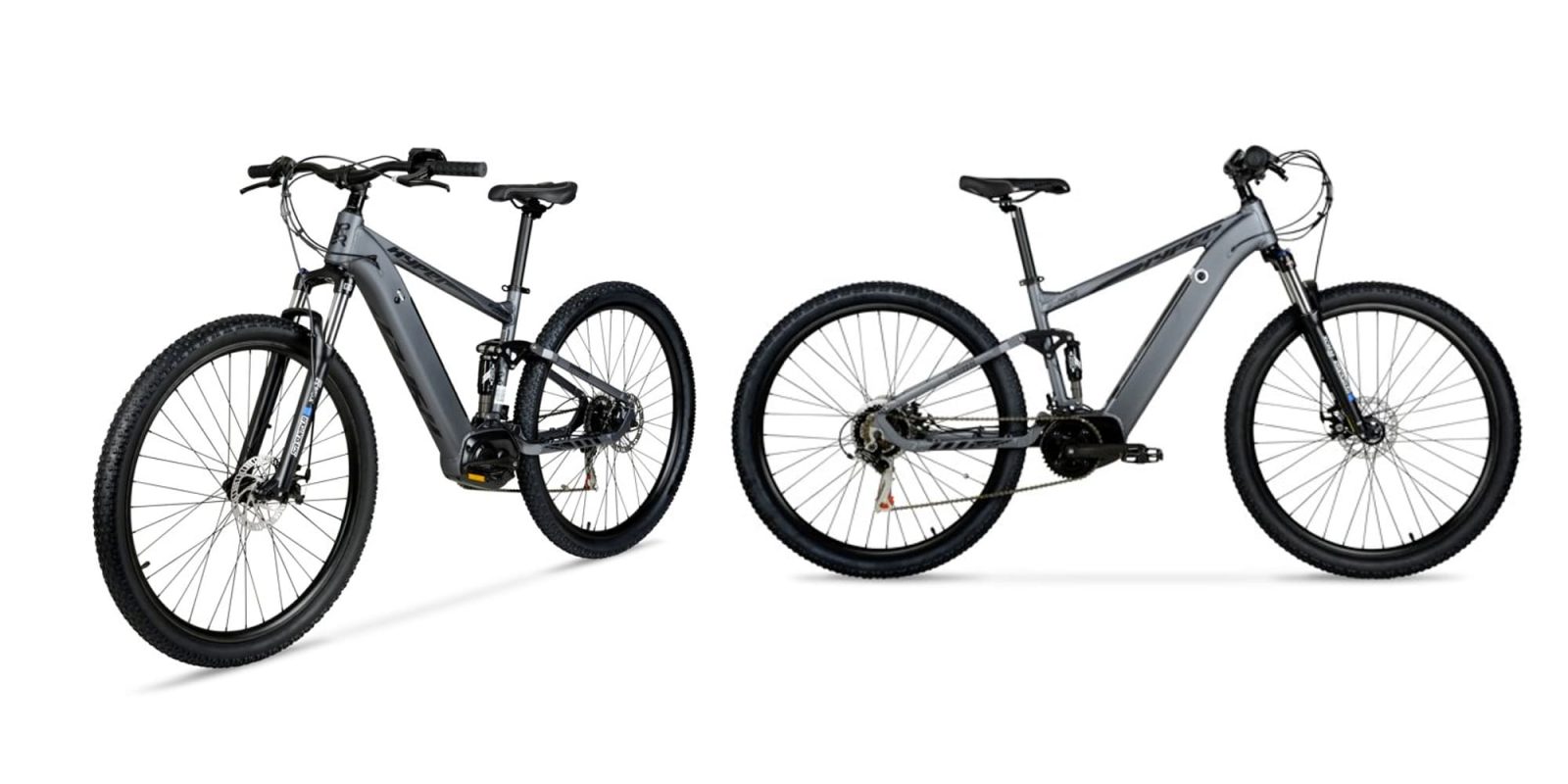 Walmart has long offered an interesting array of low-cost electric bicycles. Some of the bikes have even dipped down into ultra-budget territory with prices below $400. It can be a good option for those that want the utility of an electric bicycle but don’t have a lot of spare cash. But while Walmart is known for its super cheap e-bikes, the company has never offered higher-end e-bikes with nicer features like mid-drive motors. At least, not until now with the launch of Kent’s new mid-drive electric bike.

I’m not entirely sure what the exact model name is here. If Walmart’s product listing is any indication, the bike is known as the “Hyper E-Ride Electric Bike, 29inch Wheels, Men’s MID DRIVE MTB Dual-Suspension, 36 Volt, 20+ Mile Range, Matte Grey.”

Try telling that to someone while out of breath in the middle of a ride!

Whatever it’s called though, one thing is obvious: Walmart and one of its major e-bike suppliers Kent are stepping up their game with a nicer version of a popular electric bike model.

Mid-drive motors are one of the two most common electric bike drivetrains, with the other being hub motors. Most low-cost electric bicycles use hub motors – or a motor housed in the center of a wheel – simply because they are cheap and easy. They cost less to produce, and they are basically bulletproof in terms of user error.

Mid-drive motors, on the other hand, are more costly to produce due to their more complicated design. That complication also makes them a bit more touchy, at least for new riders that aren’t used to shifting a bike.

Mid-drive motors, unlike hub motors, actually power the bike through the standard gears on a bicycle. Hub motors, on the other hand, are single-speed drivetrains that bypass the gears and chain altogether, allowing them to be controlled quite simply as there are no gears to worry about. This is a gross oversimplification, but you can kind of think about it like automatic versus manual transmission cars, at least in terms of simplicity and ease of learning or use for the driver.

The advantages of mid-drive motors, though, mean that you’ll usually find them on higher-end electric bikes, whereas low-cost electric bikes tend to favor hub motors. With mid-drives offering advantages – including more efficient and more comfortable pedaling, plus the ability to downshift for more torque when pedaling up hills – many more serious e-bike riders that use their two-wheelers for fitness prefer a mid-drive setup.

In the case of Kent’s mid-drive electric bike, seen above, it’s not clear exactly which 250W motor is used. Nicer (i.e., more expensive) e-bikes tend to use fancier mid-drive motors like those made by Brose, Bosch, Yamaha, and other major German or Japanese manufacturers.

Cheaper mid-drive electric bikes tend to opt for Chinese-made mid-drive motors like those from Bafang, Truckrun, Tongsheng, and others.

With a price of $1,498, Kent’s mid-drive e-bike certainly isn’t competing with the several thousand dollar models that use German mid-drive motors, and so it likely opts for a Chinese motor. That isn’t a bad thing, as many riders (including myself) have been very happy with lower-cost mid-drive motors. I have a Truckrun motor on my daily rider city e-bike, and it works wonderfully.

The rest of Kent’s mid-drive e-bike fits more in line with the other budget models in its class. A 36V and 10.5 Ah battery claims a range of 20 miles (32 km) from its 378 Wh of capacity. Simple front and rear suspension offer a bit of spring without costing an arm and a leg. A 7-speed Shimano transmission may be low-end, but it is at least a name-brand component. And the mechanical disc brakes are likely plenty for a 250W bike that isn’t going to get up to 20 mph (32 km/h) very quickly.

It doesn’t exactly look like a master class in full-suspension mid-drive e-bike design and calling it a mountain bike requires a bit of a poetic license, but the bike also helps bring mid-drive functionality to riders who otherwise couldn’t afford it on more expensive e-bikes.

And yes, the Lectric XPremium is probably the best game in time now when it comes to mid-drives at affordable prices. For just a bit more at $1,799, the dual batteries, significantly higher power/speed, hydraulic disc brakes, and a pile of other features blow this Kent bike away. But Lectric’s model is also a folding fat tire e-bike and won’t fulfill the trail bike role that Kent’s offering here claims to satisfy.

Having not ridden Kent’s new e-bike (yet, but hopefully that changes), it’s hard for me to judge it too hard on the spec sheet alone. But for the $1,498 price, it’s at least an interesting addition to a slew of Walmart e-bikes that so far haven’t taken a shot at such higher-end (or perhaps even midlevel) markets.

What do you think of Kent’s new mid-drive full-suspension electric bike? Let’s hear your thoughts in the comment section below!