Electric bicycle hub motors vs mid-drive motors: Which should be on your next e-bike? 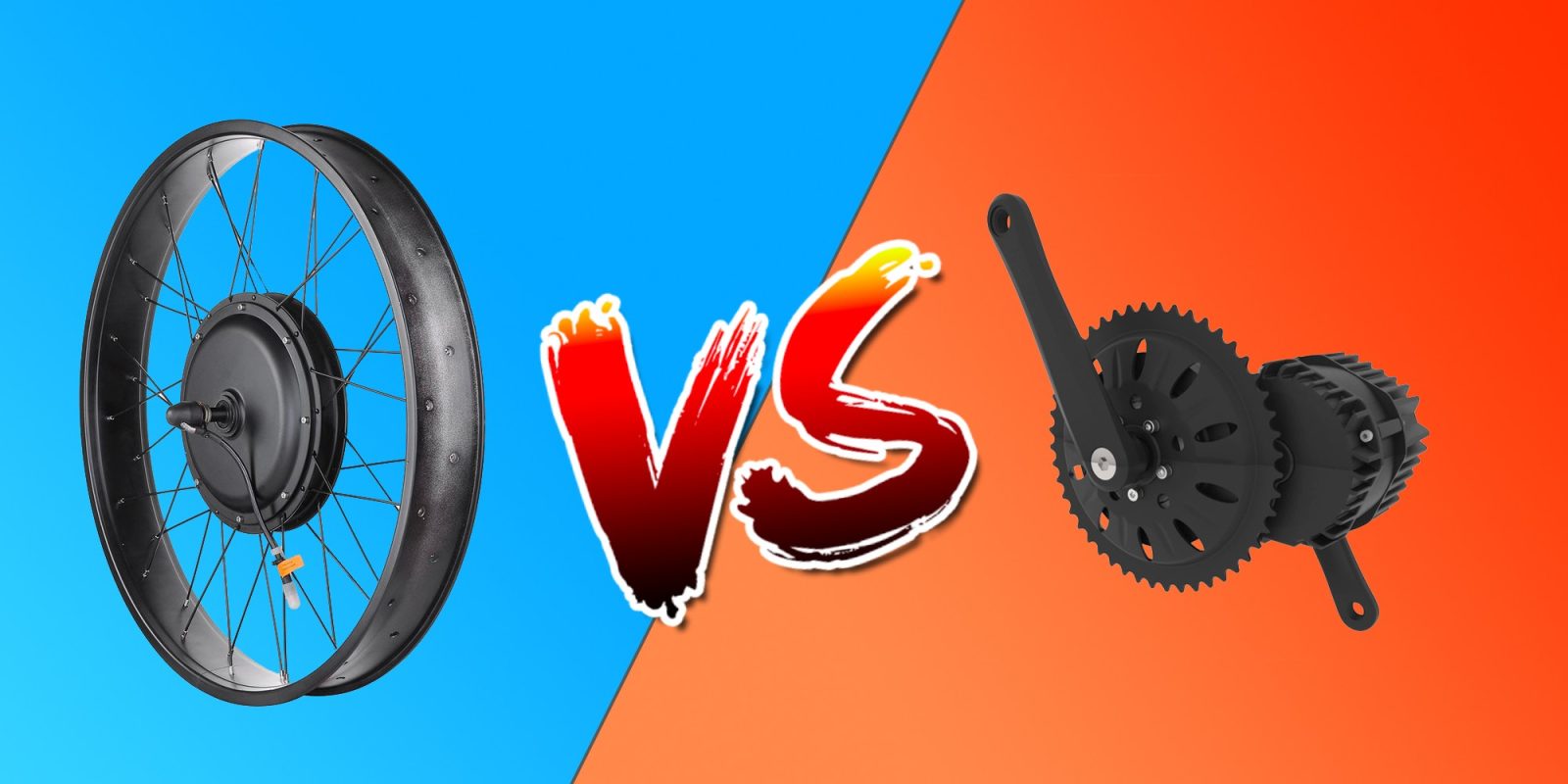 Electric bicycles are becoming increasingly popular forms of two-wheeled electric transportation for both commuting and pleasure riding. The two most common electric motor styles used in today’s electric bicycles are hub motors and mid-drive motors. Which one is best for your needs? Read on to learn more and find out!

Hub motors, which place the electric motor in the center of a bicycle wheel, are certainly the most common form of electric bicycle motors.

Mid-drive motors, which house the motor closer to the center of the bicycle and transfer the motor’s power to the rear wheel via the bicycle’s chain drive, have become much more common over the last 2-3 years, and are cutting significantly into the hub motor’s lead as the king of the e-bike motors.

Both have a number of unique advantages and disadvantages, so choosing the right motor for you will largely depend on your requirements and which advantages seem more useful to your needs.

One of the biggest advantages of hub motors is that they require little or no maintenance. They are an entirely independent drive system that retain all of their components inside the motor casing, leaving nothing for you to mess with or maintain. 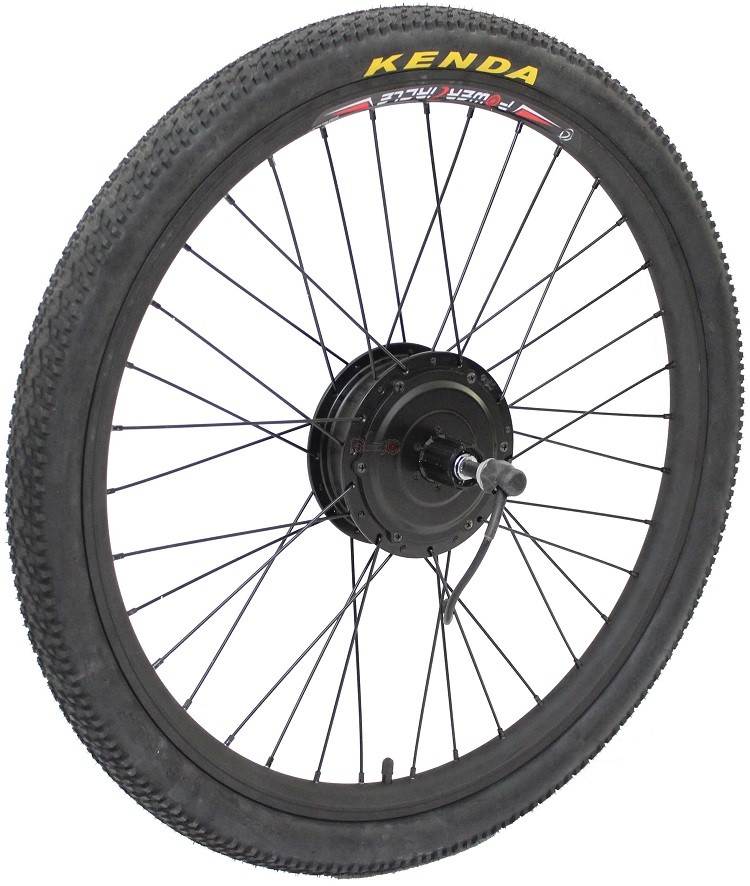 That enclosed system also means there is a lot less to fail. There are two types of hub motors: geared hub motors which have internal planetary gears to reduce the speed of a higher RPM motor, and gearless hub motors, which have no gearing and directly connect the lower RPM motor stator’s axle to the bike. Geared hub motors usually have just one point of weakness: the gears. Over time, a tooth can break off and the reinforced nylon gears will eventually strip.

Gearless hub motors, on the other hand, have zero moving parts aside from their bearings, so there is basically nothing to wear out. As long as they don’t rust out or wear down their bearings, they can pretty much last forever.

Hub motors also help reduce other bike maintenance tasks compared to mid-drive motors. Since they don’t connect to the main pedal drive system, hub motors don’t add any extra stress to your chain or shifters, and don’t cause any of those parts to wear out more quickly. If anything, your chain will probably last longer than a non-electric bike because the hub motor will be doing more work, allowing your chain to often sit idle. 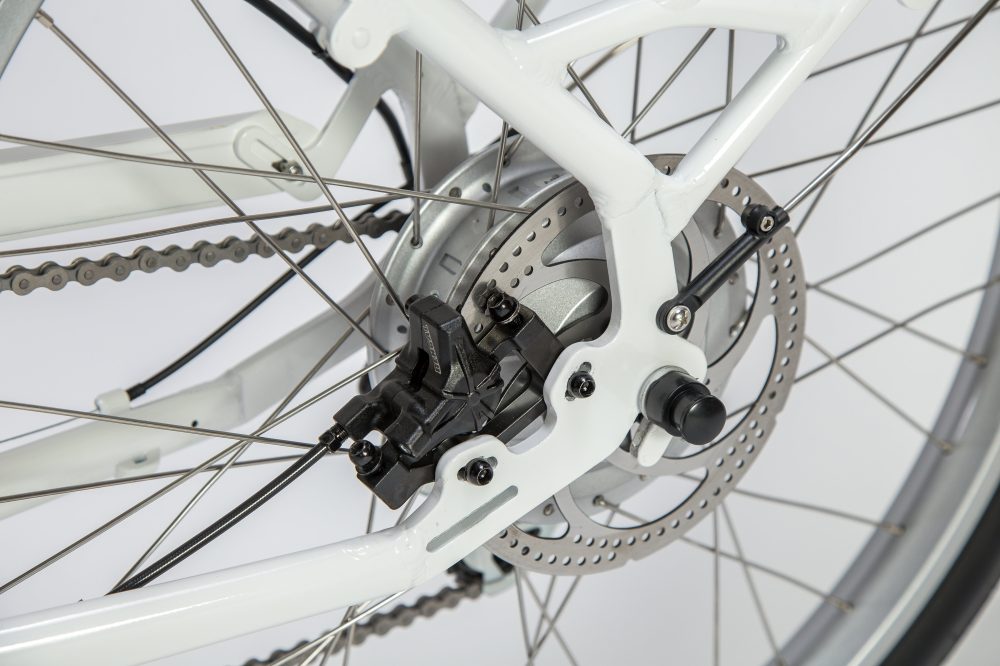 As an independent drive system, hub motors also add redundancy. Since the hub motor and the pedal drive system are completely independent, you can lose one and still get home on the other. Chain breaks while you’re hitting it hard on a trail? Toss the chain in your bag and ride home on just electric power. Hub motor somehow fails? Pedal back. Either way, you’ve got a backup. This can be huge if you’re far from home, especially for older riders or those who use e-biking as a form of rehabilitation.

The weight of a hub motor can both positively and negatively affect the balance of a bike, depending on the circumstances. In some cases, it can be nice to have the weight of a motor farther forward or backward in one of the wheels. This is especially true of e-bikes with rear mounted batteries. In such cases, a front hub motor can redistribute the weight so the center of gravity is still in the center of the bike.

Lastly, hub motors are much cheaper than mid-drives. Hub motor bikes are mass-produced by the hundreds of thousands, perhaps even millions depending on the factory. The same designs have been in constant use for over a decade in some cases. This means that the prices are astoundingly cheap.

As we’ve covered in some of our past DIY e-bike articles, you can get an entire 1,000 W hub motor kit, including the electronics, throttle, etc, for under $200. The same power level in a mid-drive kit can easily cost 3-4x as much. 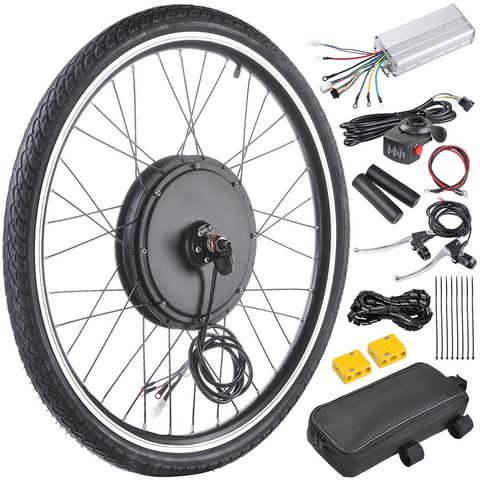 Perhaps most importantly, almost all hub motors only allow a single gear ratio. While this is usually fine for flat land cruising, a lower speed but higher torque gear would be preferable for hill climbing. It just isn’t as efficient to use a single speed motor when functioning at the lower RPM range under load.

Hub motors are usually heavier than mid-drives, and that weight is unsprung weight on suspension bicycles, which can reduce the effectiveness of bicycle suspension and transfer more bumps to the rider.

Hub motors can be more limiting when it comes to wheel components such as rims, tires and cassettes. Because you’re limited to the rim that comes with the hub motor, you might not be able to fit your favorite tire, and the width of hub motors often precludes cassettes with more than 7 speeds. 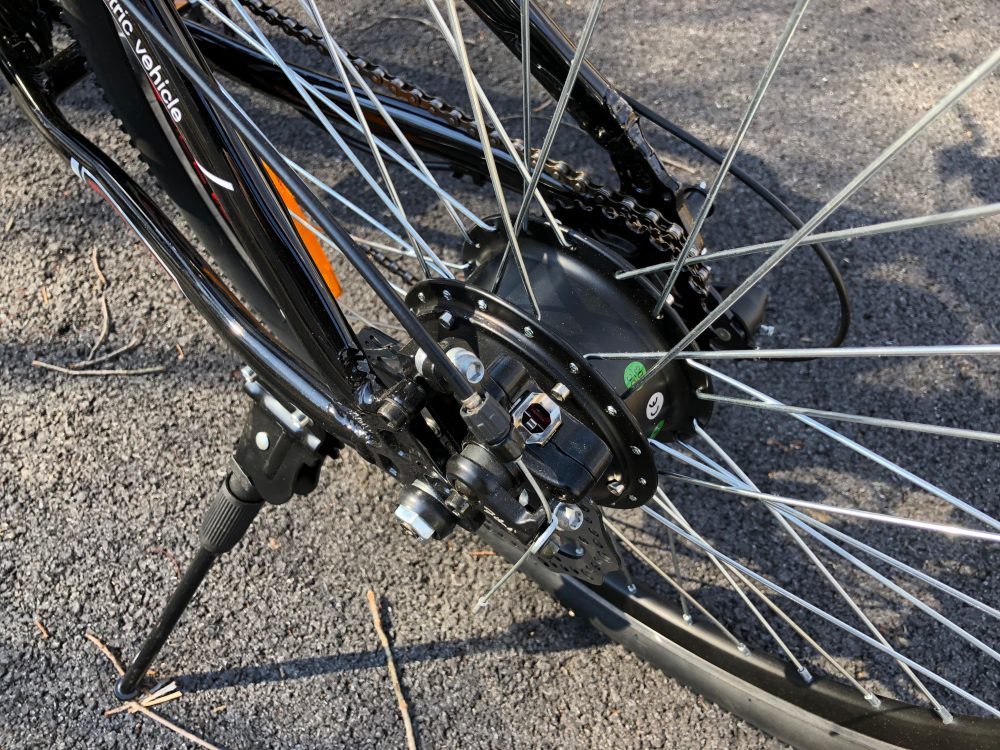 Tire changing is also more difficult with hub motors, since you must often disconnect the motor wire or wrestle a heavy wheel around while it’s still tethered to the bike. However, there are some really cool bicycle inner tubes that can be replaced without removing the bike wheel – great for hub motors.

Hub motors can of course be installed in either wheel, and the difference also creates a few other unique advantages and disadvantages.

Because more weight is usually focused on the rear wheel, front hub motors can help balance out the weight better.

Front wheels also usually receive fewer flats than rear wheels, as they often kick up road debris and prepare it for the rear. A front hub motor leaves the rear wheel unadulterated for easier tube and tire changes. 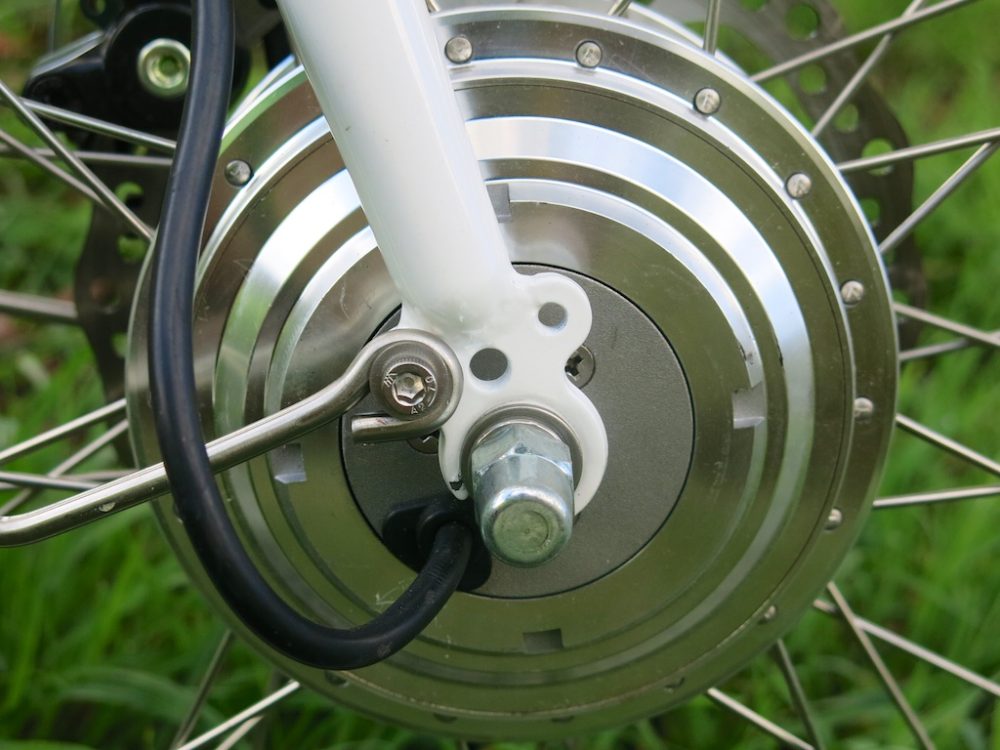 Rear hub motors have the advantages of better traction and stronger frame mounting.

Perhaps my favorite thing about rear hub motors is that they give you more of that motorcycle pushing feeling instead of the pulling feeling of a front motor.

Once you reach steady speed and are traveling in a straight line though, the differences between a front and rear hub motor are almost unnoticeable.

Mid-drive motors were designed to improve upon a number of shortcomings found in hub motors. 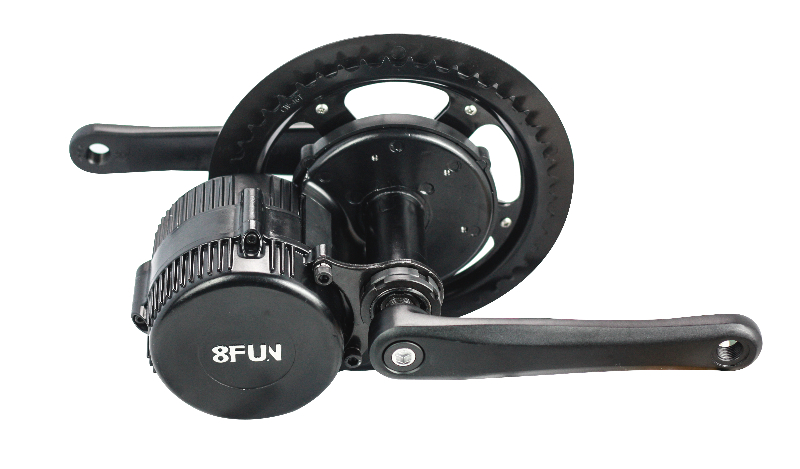 The single largest advantage that mid-motors have over hub motors is their gear ratio. They allow the rider to power the rear wheel via the same chain and gear set as the pedals, which means that a low gear can be selected for powering up steep hills or accelerating from a stop with massive torque. A mid-drive motor in low gear can climb steeper hills than a hub motor of similar power, and can climb hills for longer than a hub motor, which could overheat on long steep hill climbs. 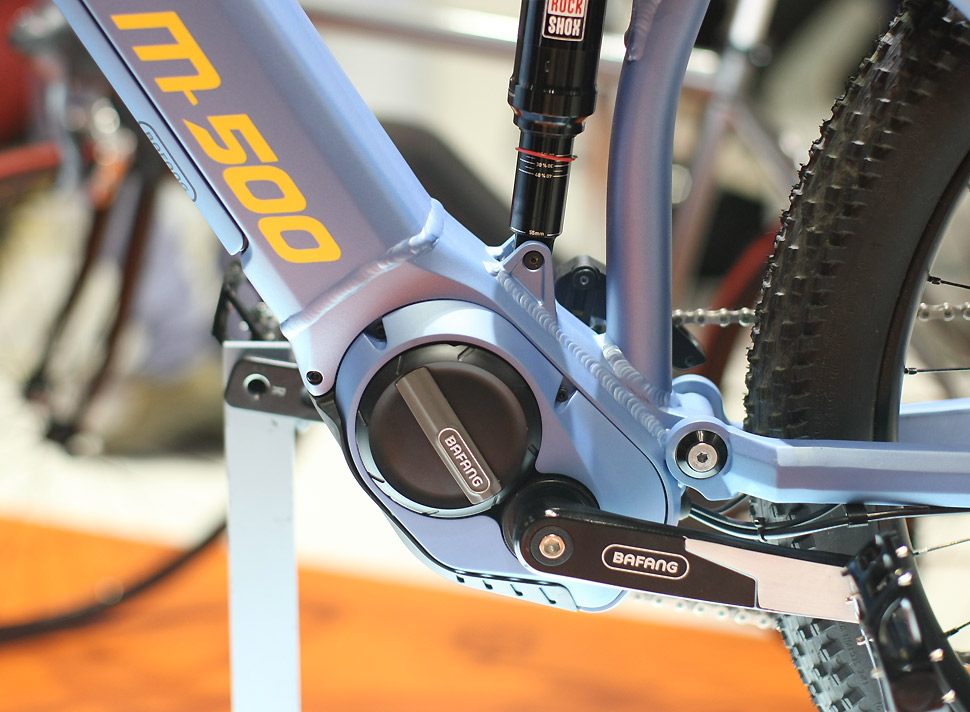 Changing a tire on a mid-drive motor e-bike is much easier, since you don’t have a heavy hub motor to deal with. You just change it out like on a normal pedal bike. Plus, since you can use normal bicycle wheels, you have the freedom to use any wheels, tires and cassettes that you wish.

Lastly, mid-drive motors allow the use of true torque sensors for pedal assist systems, which regulate the motor power based on how hard you push on the pedals as measured at the crank. Hub motors often rely on cadence sensors for pedal assist, which only regulate motor speed based on pedal speed, and can cause jerky or awkward motor timing, especially when hill climbing or moving the bicycle around obstacles.

Of course there’s a second side to this coin as well. Mid-drive motors can be brutal on your drive system, which is perhaps their single biggest flaw.

A healthy human can put out 100 W of power for a pretty long time, and 250 W of power during a hard sprint is reasonable. But mid-drive motors can output 250-750 W of power continuously. That’s like having a professional cyclist hammering on your pedals all day. A cheap bicycle chain just doesn’t stand a chance. Snap!

Retail mid-drive e-bikes usually come with upgraded bicycle chains for just that reason, since snapped chains is probably the #1 maintenance issue on mid-drive e-bikes. And because both the motor and pedals need the chain to drive the wheel, riding a mid-motor e-bike with a snapped chain is a strictly downhill affair.

One way to mitigate the chain issue altogether is to choose a mid-drive e-bike with belt drive, though factor the added price into your equation as well. 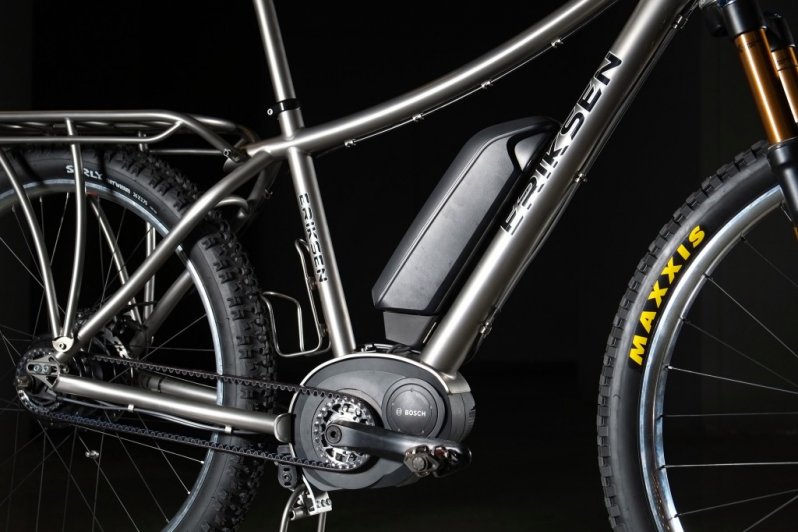 Because of the increased number of moving parts in a mid-drive motor, there are more points of failure. If the motor does fail, and its a motor that is built directly into the frame of the bicycle, it can be more expensive to replace than just swapping out a hub motor.

In fact, mid-drive motors in general are also more expensive than the tried and true, mass-produced hub motors found on many e-bikes.

There is another downside of mid-drive motors that a lot of people don’t consider until the first time they come to a stop. You can’t shift unless the bicycle is moving (except for bicycles with internally geared rear hubs, which are a minority). That means that if you were in top gear while flying down the street but are then forced to stop at a red light, you’ll want to remember to downshift before coming to a stop. Otherwise you’ll be stuck in top gear when you try to pull away from the light and your acceleration will suffer. 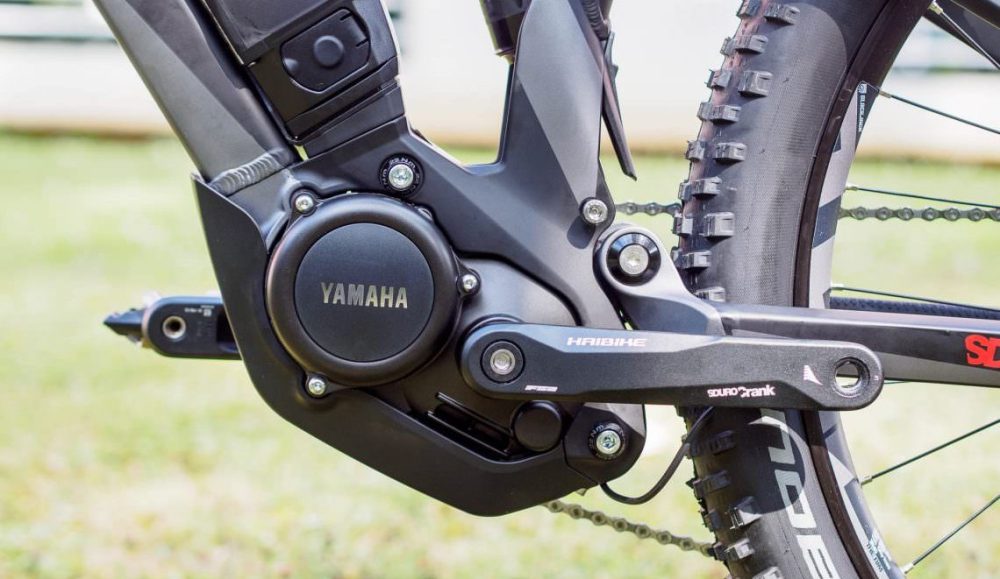 And don’t even think about shifting while under motor power. Doing so is the best way to rip your chain in two. There’s simply too much torque in an electric motor, and the extra stress can easily break the chain when it is between cogs. Nicer mid-drive e-bikes have gear shift interrupters that briefly cut the throttle when you shift gears. But many e-bikes lack this feature, and so it is on the rider to remember to relax the throttle when changing gears. No granny shifting!

So what’s the verdict?

The most annoying answer: it depends!

Mid-drives have a lot of improvements over older hub motor technology, but they have their own unique issues. There’s a reason hub motors have been around so long – they work.

The main advantages of mid-drive include lower weight and better gear usage, which makes them more appropriate for off-road use and those with hilly terrain to traverse.

Hub-motors, on the other hand, are fairly bulletproof and low maintenance, and thus are usually better for commuters and those that want a simple, reliable e-bike with very little maintenance.

However, many off roaders like the power and reliability of hub motors, and many commuters prefer lightweight, stealthy and unobtrusive mid-drive motors. It really depends on which features fit you best.

At the end of the day, the best e-bike motor is the one you have. So just get out there and ride!

What type of e-bike do you have, or which would you prefer to buy? Let us know in the comments below.