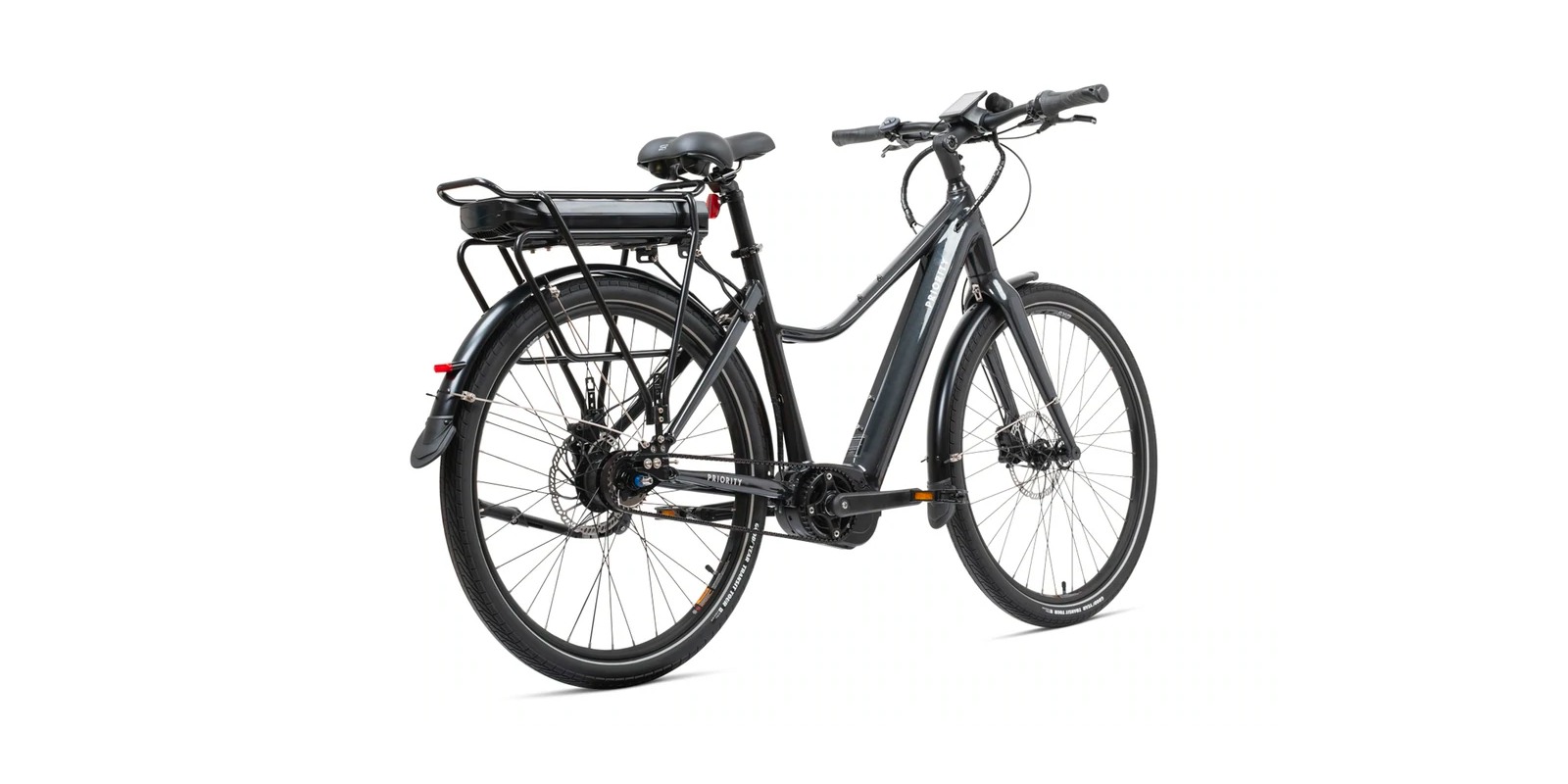 I ride electric bikes all the time. It’s kind of my thing. It’s a blast because I get an awesome ride experience without the pain and discomfort that normally comes from a long and arduous pedal bike ride.

But nothing harshes a good e-biking vibe quite like a low battery. So Priority decided to nip that problem in the bud by introducing a range extender battery for its popular Current e-bike, doubling the capacity and thus doubling the e-bike’s range.

The Priority Current is a hybrid-style commuter/leisure electric bicycle.

It’s a 28 mph (45 km/h) e-bike that features a mid-drive motor and internally geared hub, with a Gates Carbon Drive belt connecting the two to complete the drivetrain.

And it gets great range out of its 500 Wh frame-integrated battery. I know because I own one, and I usually average about 40 miles (64 km) of range per charge, though the company says you can get up to 50 miles (80 km) if you’re using lower power. The Priority Current is my go-to city fitness/transportation bike. It’s the one I grab when I want a good pedal ride (it doesn’t have a throttle, but instead relies on pedal assist) and I know I won’t be hitting any off-road trails that day.

I liked the bike so much after reviewing it last year that I bought it off of the company so I wouldn’t have to send it back. To be fair, they gave me a deal on it (Hey, some schmuck had already put a bunch of miles on it and the bike was now “used”).

But sometimes I want to go for a longer ride, especially on a weekend when I have the time to really put in some miles.

I’ve actually toyed with the idea of buying a second battery to carry in my backpack on a long ride and then swapping it in a couple of hours later when I’m halfway through the ride. It’s not fun carrying a heavy e-bike battery on your back, though there are backpacks designed for just that with special compartments to carry a spare e-bike battery. But batteries ride best where they’re intended to be: mounted on the bike itself.

And then this news landed on my desk: Priority introduced a new range extender battery. And it basically solves that problem for me.

“Double the range of your Current e-Bike to make it the ultimate car replacement, long distance commuter, or all-day cruiser.  Shipping with a custom rear rack, the Current Battery Extender integrates into the existing Current system with simple household tools, offering up to 100 miles of uninterrupted pedaling.”

Essentially, it’s a second 500 Wh battery that comes with its own rack and it simply bolts onto the rear of the bike. It doubles your original 500 Wh capacity, and it also gives you a rack.

The Current’s tail light and brake light are already built into the rear fender, meaning a rack won’t obscure it.

I had been toying with the idea of getting a rear rack for the bike as well to make it a bit more utilitarian for my city errand running, and so it feels like this news is kind of tailor made for me (or people like me, which is the less egotistical way to consider it).

The price feels a bit high, but that’s kind of the current state of things in the e-bike industry these days. Prices have been on the rise for everything due to supply chain constraints and skyrocketing demand landing a one-two punch on the industry.

[Update 21/2/22: Having learned a bit more about the battery extender, the price doesn’t seem quite as steep as I initially thought. Unlike so-called “dumb” systems that simply connect two batteries in parallel, Priority’s setup required designing a more sophisticated controller that drains the batteries in series. It prevents the issue of requiring the batteries be kept at similar charges, though it adds to the R&D costs. Between that and the specialized wiring as well as increased cell prices, you end up with an expensive range extender.]

But in terms of functionality, I love this thing. The ability to simply bolt on a second battery to double your range in a couple of minutes is pretty awesome. I’ve built my own range extender batteries for electric scooters before (I kind of wrote the book on DIY battery building), and so this is definitely an interesting product to me.

To be clear, most people probably won’t need a range extender battery. In fact, I’ve gotten by fine for over a year with 40 miles of range from the stock battery. But I’ve often pined for even more range, and this tickles that particular itch.

And all of this begs the question, “What about universal range extender batteries for e-bikes?” In this case, Priority’s range extender only fits Priority’s own e-bike, the Current. Theoretically, this could be done to lots of e-bikes, but the idea begins to fall apart in practice due to the lack of standardization in the e-bike industry. Every company has its own battery (or one of a dozen-ish common designs) with its own connector (or again, one of maybe a dozen connectors).

I’d love to see more standardization in the e-bike industry. But until then, range extenders like these will probably be brand-specific for the foreseeable future.