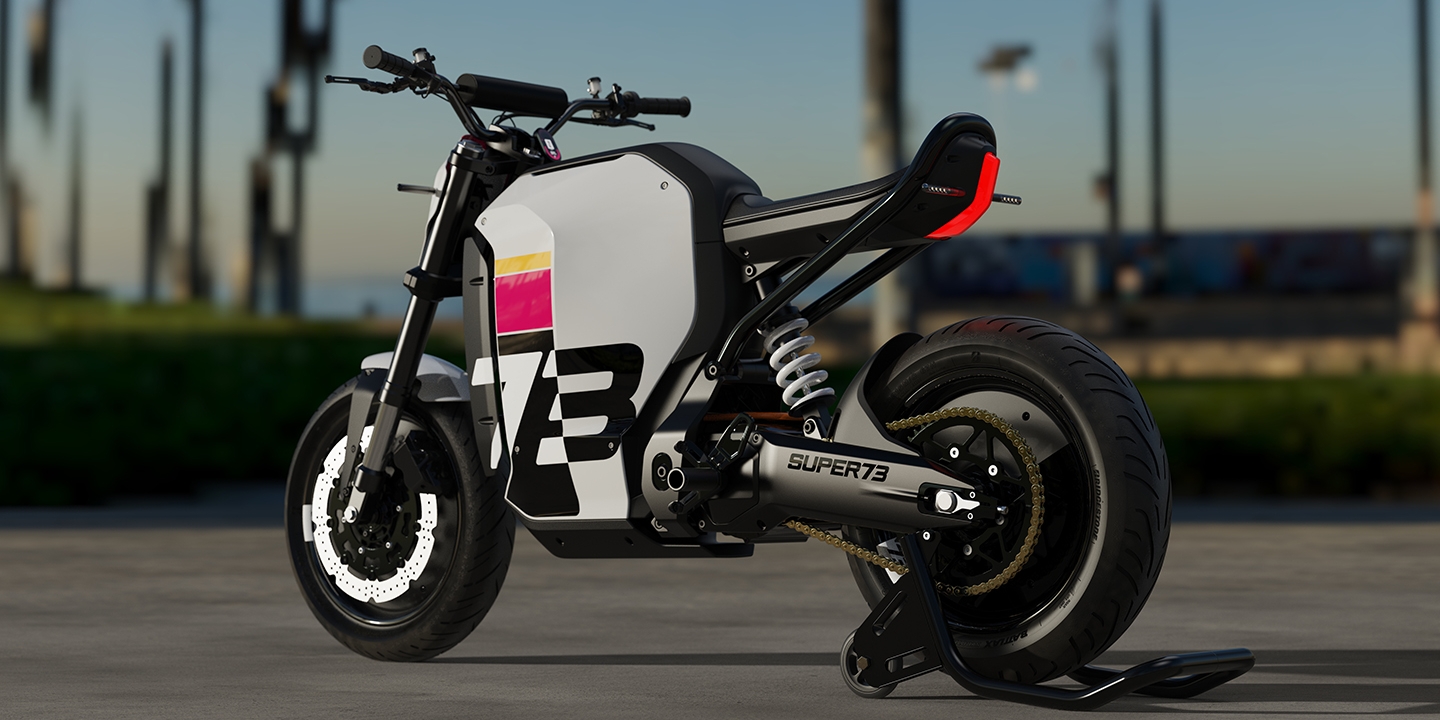 SUPER73’s highly anticipated (and then cancelled, and then rescheduled, and then delayed a bit again today) debut occurred just minutes ago in Los Angeles. The brand had teased multiple new electric bicycle models and hinted at a light electric motorcycle. Fortunately for anyone who values their e-bikes with an extra side or two of excess, SUPER73 delivered. The SUPER73-C1X electric motorcycle concept was unveiled alongside a new entry-level Z-series e-bike, an updated R-Series bike, and a new kid’s electric balance bike.

Anyone who is familiar with SUPER73 already knows that the brand walks a fine line somewhere between “high-powered electric bicycles” and “electric motorcycles that you can park at the bike rack”.

Look no further than the 2,000W and 30+ mph R-Series electric bikes that SUPER73 unveiled as the brand’s first full-suspension models.

But now the new SUPER73-C1X ratchets up the power even further, in the process kicking away the pedals and any remaining electric bicycle charade with them.

Instead of a high-powered electric bicycle, the C1X gives us a low-powered naked electric motorcycle. SUPER73’s disclaimer underlines the fact this ain’t your typical e-bike anymore: “License, Registration, & Insurance Required”.

Taking it a step further, CEO LeGrand Crewse described it on stage as the “natural evolution of a SUPER73.”

The smallish size and 31″ seat height puts it closer to a Honda Grom than a full-sized street bike, and the smaller-format 15″ wheels should keep it fairly nimble.

The bike should be lighter than full-size motorcycles as well, as the company says it has a “target weight of under 300 lb.”

The C1X features a mid-mounted motor, though the company has not yet released a power figure for the motor. SUPER73 did say that it should get riders up to a max speed of “over 75 mph,” or at least 120 km/h for anyone keeping track across the pond.

SUPER73 opted for a chain drive on the C1X, so don’t expect this to be a silent electric motorcycle. Unlike most e-motos that use belt drives, chain-driven electric motorcycles tend to have a bit more chainsaw sound than motor whirr.

There’s no word yet on how large the battery pack on the SUPER-C1X is, but the company claims it can eke out a maximum city range of 100 miles (160 km).

What’s the range at its top speed of 75 mph? Your guess is as good as ours, but around half of that figure or less would be a wise wager.

Recharging should be fairly quick though, as the company claims an 80% charge in less than an hour.

Adding to the lack of information released for the C1X is the price. SUPER73 didn’t reveal a final figure for the brand’s first street-legal motorcycle, but they are taking $73 deposits for reservations. Production is expected to begin in “late 2023.”

The SUPER73-R Brooklyn was unveiled as the latest full-suspension e-bike in the brand’s lineup. While the previous R-series e-bikes from the brand have had a more off-road focus, the Brooklyn model will be destined for road use.

The bike also includes a healthy combination of new components as well as popular retained features, as the company explained:

“The SUPER73-R Brooklyn now includes a front and rear lighting package plus a horn – items that were previously reserved for the RX. The R Brooklyn also gets air assist for its inverted coil spring fork to enhance comfort and control, while its two-piston hydraulic brakes are retained. As before, the SUPER73-R Brooklyn has a powerful internally geared brushless DC hub motor capable of 2300 watts peak output. Powered by a state-of-the-art 960 watt-hour battery, the R can deliver more than 40 miles of range at 20 mph under throttle activation, or in excess of 75 miles using ECO pedal assist mode, selected via the SUPER73 phone app.”

The bike may get 40 miles of range at 20 mph, but many riders will surely be keen to unlock its top speed to a more thrilling 28+ mph.

The new Super73 Z-Miami may look like a familiar Z1 e-bike like we’ve seen before, but it sports some key updates.

The bike also sports some healthy performance, as the company explained:

“The internally geared brushless DC hub motor is capable of 1200 watts of peak power. Coupled to a durable 615 watt-hour removable battery, the SUPER73-Z Miami is capable of providing more than 30 miles of range at 20 mph under throttle-only operation, or approximately 50 miles of range using ECO pedal assist mode via the selectable riding modes in the SUPER73 phone app. Additionally, it will be supplied pre-wired for easy installation of optional accessory lighting.”

SUPER73’s new electric bike for kids is a bit more motorcycle than balance bike, though SUPER73 CEO LeGrand Crewse certainly pitched it as a balance bike to help kids ages 4-8 learn to ride a bike and develop key balancing skills on a two-wheeler.

The bike features a right-side twist throttle, low seat height, large foot platforms, and an adorable little removable battery with 60 minutes of ride time. There’s even a hydraulic disc brake setup on the rear – a surprisingly nice component for a kids’ bike.

There are multiple parent-controlled ride modes that should allow moms and dads to adjust the ride intensity as junior’s skills improve.

With a maximum rider height listed as 48″ inches, it seems some bigger kids might be able to enjoy it for more than just “learning.” Cruising the block on the tiniest little electric motorcycle you’ve ever seen sounds like a hoot.

Better get your parents to pay for it though – the Youth Series will be priced at $995.

The design of the C1x is definitely going to be divisive. In fact, SUPER73’s EU website accidentally leaked the design when someone found a cached version of the C1X’s launch page and posted it on the SUPER73 subreddit. The mods made quick work of taking the Reddit post down, but not before comments poured in largely panning the bike’s aesthetics.

Then comes the price. It was always going to be tough for SUPER73 to compete on price – it’s just not in the company’s playbook. SUPER73 has always charged a premium over comparably performing bikes like those from Ariel Rider. Then you have to consider that something like CSC’s City Slicker electric motorcycle, which does nearly 50 mph (80 km/h), is priced at just $2,795. Not to mention a more comparably-spec’d Kollter ES1, which can do 75 mph (120 km/h) for just $5,995. Without yet knowing what SUPER73 will charge, it remains impossible to say if it can compete with the many new entrants into this growing market. But with world markets in a tailspin and the company likely keenly aware of SONDORS’ Metacycle debacle, not announcing a price until the years-out production grows closer was probably a wise move.

The Youth Series is an interesting move for the company. I’m not sure how much of a need there was for an e-bike in the ages 4-8 demographic, but I sure do want to try riding that little thing.

The Brooklyn version of the R-Series definitely seems like a nice move, as that bike is going to be a great e-moto in an e-bike package for street commuters.

All in all, SUPER73 had some solid showings. Now the waiting game begins to see if we ever get a C1X and if it comes in at a reasonable price.