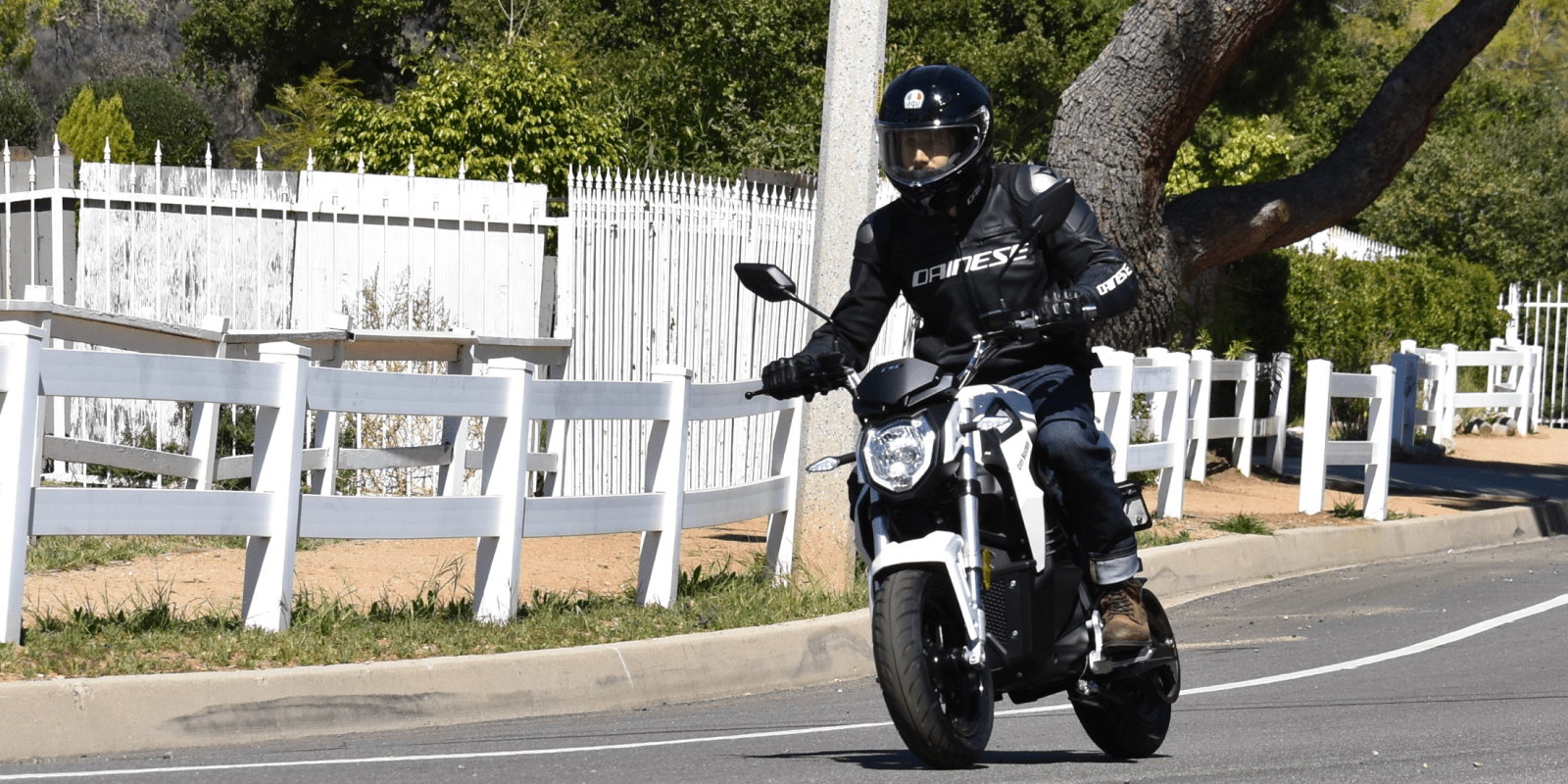 I have frequently written about the benefits of electric motorcycles and how they can play a large role in saving our cities from pollution and congestion. But as beneficial as they are, there are two major factors holding back large scale electric motorcycle adoption: high sticker prices and a general fear/skittishness of motorcycles. That’s why I believe that smaller, urban electric motorcycles like the CSC City Slicker are such an interesting part of the market. They offer the approachability of an electric bicycle or scooter but with high enough speed and power to actually serve as a true city/suburban commuter vehicle.

The 2020 CSC City Slicker is priced at $2,495. Tack on around $400 in assorted dealer fees for documentation, assembly, inspection, transportation, etc., and you’ve got a fully functional electric motorcycle for under $3,000.

Of course “fully-functional” doesn’t mean it’s going to be giving Zero Motorcycles a run for their money anytime soon. The City Slicker, as you may have guessed from the name, is not a highway-optimized vehicle. It’s meant for the city and suburbs, which is where it excels.

The speed tops out at around 46 mph, though lighter riders claim to creep right up to the edge of 50 mph if they grit their teeth hard enough.

And the range isn’t going to win any awards either. In the city, you’ll get around 40-60 miles while riding full out at top speed will drop that closer to the low 30’s.

But again, this is an electric motorcycle that costs less than many electric bicycles. In fact, it costs half as much and goes twice as fast as many models.

It might not be right for everyone, but it could be right for a lot of people – more than you’d think. Check out my video ride of the 2020 CSC City Slicker below, then read on for the whole story. 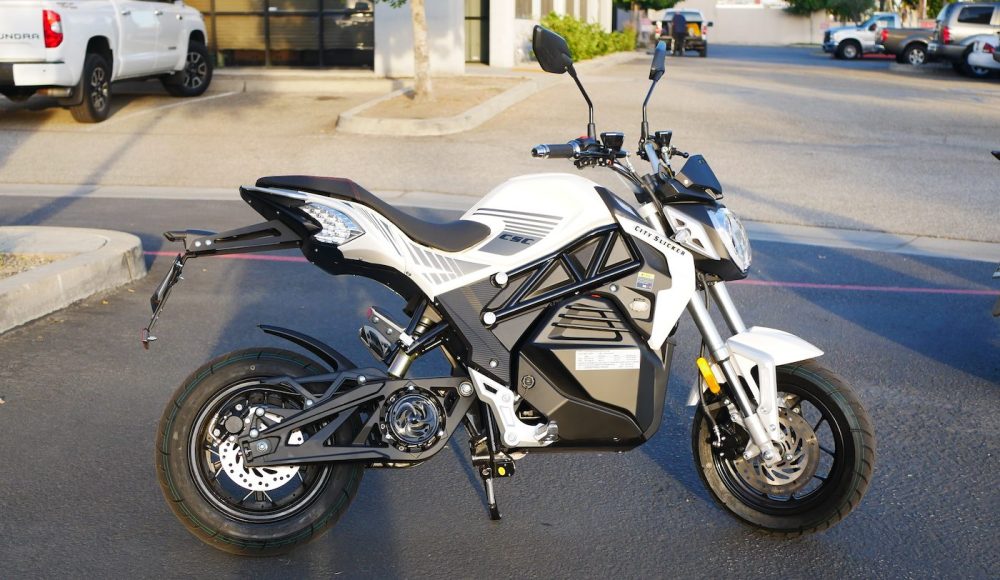 When it comes to size, the CSC City Slicker feels approximately like a Honda Grom. It’s a legit motorcycle, but you don’t stretch out or lean forward as much as you would on a roadster or a sportbike. The peg height feels sporty, but you sit more upright, which is actually more comfortable for me. You can lean in if you want, but the bike definitely offers a mostly upright seating position.

With the small wheels and short wheelbase, it’s oddly nimble. It’s almost like maneuvering a bicycle. When it comes to a garage or driveway, it’s actually a dream vehicle.

If I was doing 90 mph, that short wheelbase might feel a bit funny, but I’m not. I’m doing high 40’s. Because this is an urban/suburban commuter. Remember?

And so while some people can’t seem to get over the fact that it’s “little”, the 2020 CSC City Slicker has big potential. You’re not going to be flying at nearly 50 mph on a bicycle – but you can do it repeatedly on this little guy.

And considering some people consider motorcycles to be a form of compensation for some men, by that logic this little bike should be getting you phone numbers left and right!

And that seems to be the key to the City Slicker: It offers a fun motorcycle-like ride with the approachability and ease of use of a bicycle or scooter. It even has dual hand brakes instead of the conventional motorcycle foot brake lever for the rear brake. That means anyone used to riding a bicycle or scooter will immediately feel at home (though you should note that the levers are backward from American bicycles – rear brake is on the left side).

The power is there – all 3.2kW. I actually had a 2019 model CSC City Slicker and used an electrical meter to clock the power at just over 4kW. Your interpretation of that power will likely depend on your frame of reference. If you’re coming from the electric bicycle world, that power will knock your socks off. If you come from the motorcycle world, it will feel like a scooter.

But to put it in real-world terms, I rolled up to the CSC shop for my 2020 City Slicker test ride on a 2020 Zero SR/F – the most powerful bike in Zero’s lineup. And I still had a blast riding the City Slicker all afternoon. So there’s fun to be had even with a power level that can’t quite pull a wheelie.

When used in its element, the City Slicker does everything I need. In the city, I can pull away from streetlights faster than cars. In the suburbs, I can ride in the lane, even on 40 mph posted roads. Try that on an electric bicycle!

The range is fine for city use, though it means you’ll likely want to charge it each night to start with a fresh battery. If you need more than 30-40 miles of range for your commute then there’s a chance you’re taking a highway anyways, so the City Slicker might not be for you. But if you’ve got a 10-15 mile commute through the city or suburbs, this would be the perfect way to turn your boring commute into a daily adventure. 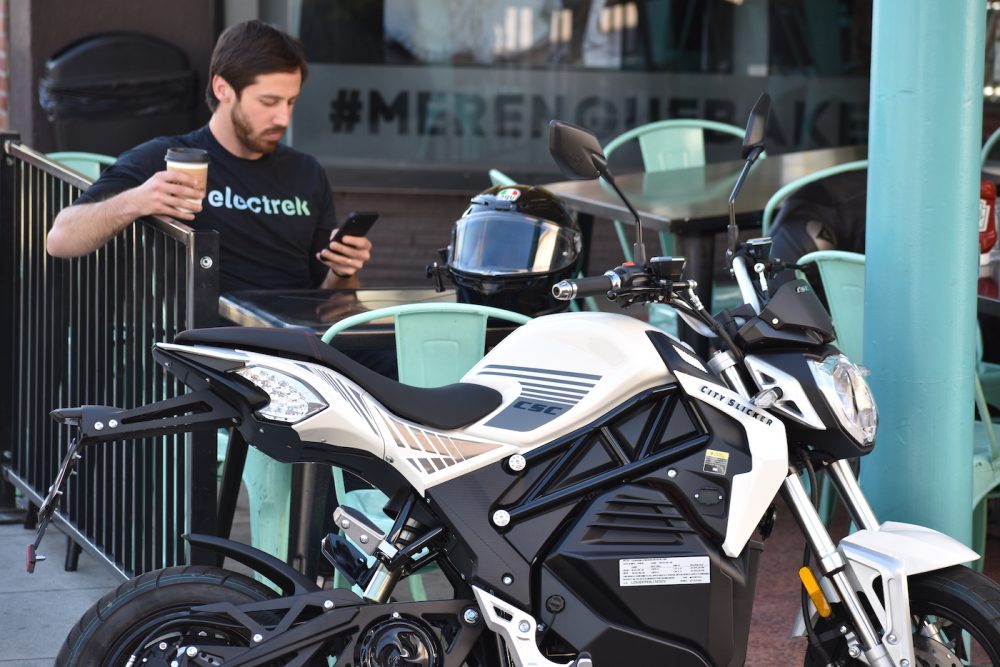 The 2020 City Slicker even got an upgrade this year to the one area that I felt was previously lacking on the 2019 model: The battery lock. It always worked, but it required a bit of fiddling to remove the battery each time. This year the lock has been made more robust and streamlined, resulting in a smoother battery removal-experience.

As it stands though, most people won’t need to remove the battery that often, especially considering the number of garages you’ll find in suburbia. But for apartment dwellers that park on the street and don’t have a garage to charge in, you can muscle the 35 lb battery upstairs and charge it in your living room. Try that with a Harley-Davidson LiveWire!

So is the CSC electric motorcycle right for everyone? Of course not. But I think it could be right for more people than you’d realize. We’re talking about a lightweight, energy-efficient vehicle that can travel on any city or suburban road, costs pennies per week to operate, and can turn a boring commute into the highlight of your day. All for the cost of an electric bicycle.