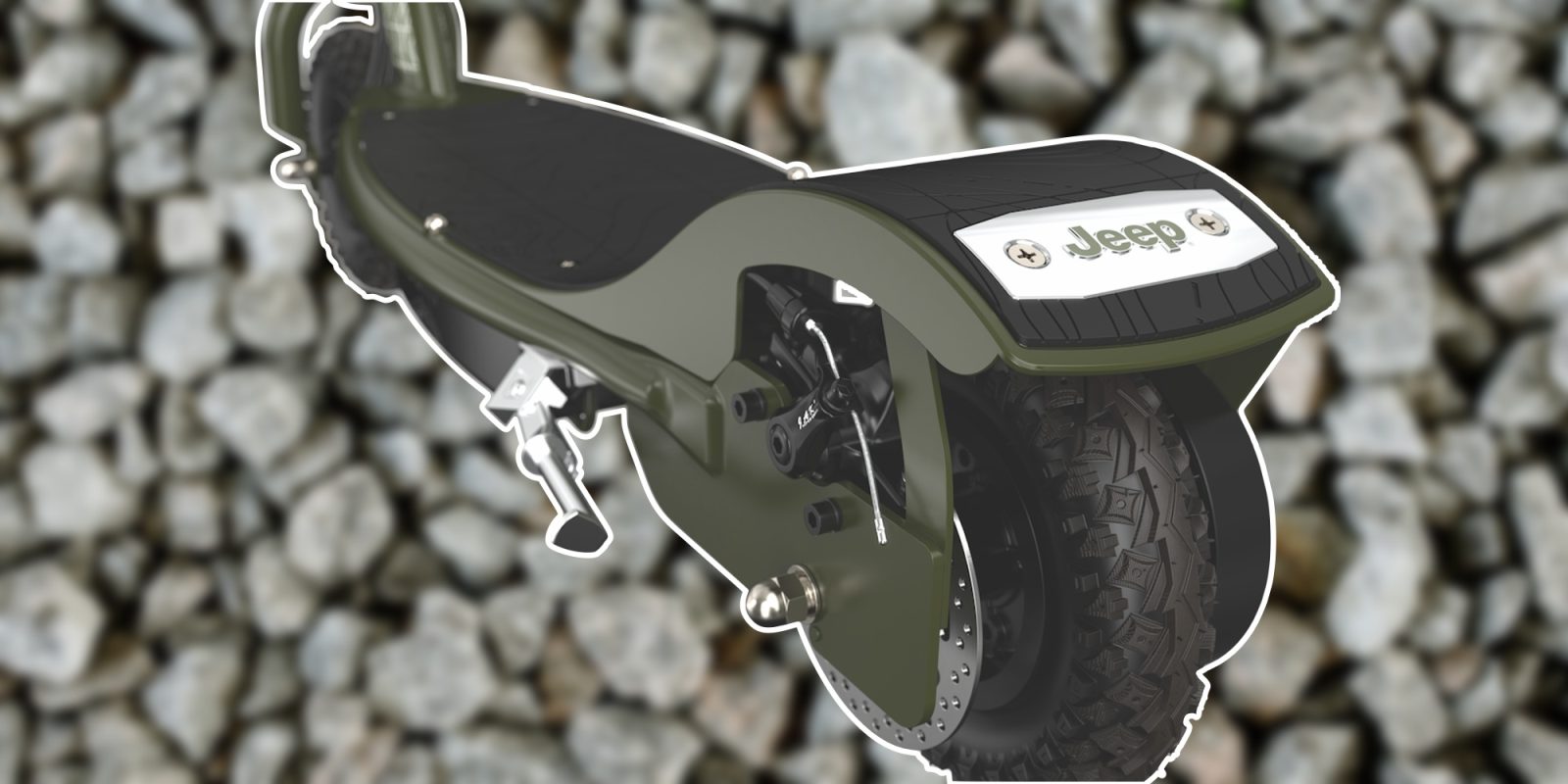 Jeep has a new electric scooter known as the “Jeep RX200 with Razor” heading your way soon, expanding the brand’s presence on two wheels. But just like with Jeep’s electric bicycle project, it didn’t go it alone. This time the automaker teamed up with Razor to create Jeep’s first electric scooter model.

The partnership and resulting electric scooter was just announced this morning, with the mashup resulting in the “Jeep RX200 with Razor”.

The duo claims that the scooter has the “style and feel of a Jeep Wrangler,” though we’ll leave that up to you to decide. Either way you slice it, the scooter is definitely arriving before any potential electric Wrangler we might see in the future.

Riding on 8″ pneumatic tires, the electric scooter comes in an olive drab colorway that harkens back to the WWII-era Willys Jeep.

The color comes from a powder-coated steel frame as opposed to a traditional painted frame.

The handlebars on the 39.5 lb (18 kg) electric scooter are adjustable and sport rubber grips with a twist throttle.

Jeep says that the scooter “was made to rip through the rough, off-road terrain,” but it doesn’t seem like it will be doing so at terribly fast speeds.

The top speed is rated at a mere 12 mph (19 km/h), which falls short of most of the currently available off-road electric scooters on the market today.

The scooter’s price of just $499 might be its saving grace. Rider’s won’t get there fast, but they’ll sure do it for cheap!

The low speed is likely due to the underpowered 200 watt motor that uses a chain to drive the rear wheel. It’s a design we’ve seen on Razor’s smaller electric scooters before and it seems like they’re sticking to their guns on the drivetrain.

There’s no suspension to speak of, but you do get some trail-lookin’ dual headlights. Braking is accomplished via a disc caliper on the rear wheel.

The scooter appears to be designed for a good time, not a long time. The 40-minute ride time is limited by the 24V 7Ah lead-acid battery pack. With just 168 Wh of battery from rather old lead-acid technology, the scooter isn’t meant for long meandering cruises or all-day mountain path traverses. Instead, it’s likely best used as a recreational scooter for shorter excursions and joy rides.

Razor says the scooter is designed for adult riders aged 18 and up, though the weight limit of just 154 lb (70 kg) means there’s going to be a somewhat narrow window of adults who fit the rider window.

While there’s a lot of Jeep branding on the scooter, the DNA seems to be largely Razor.

“Razor is always looking for creative ways to excite our riders and provide an exhilarating adventure. We are thrilled to collaborate with the iconic Jeep brand to create the Razor Jeep RX200, which is powerful enough for off-road capability to go explore the outdoors.”

I’m not entirely sure what makes the “Jeep RX200 with Razor” different from Razor’s existing RX200 scooter that appears to have the same specs but is priced at $318 on Amazon right now. Besides the Jeep stickers and dual headlights, there doesn’t appear to be much else missing.

Compared to the last electric two-wheeler we saw Jeep partner on, the Jeep scooter is a rather low power offering.

The QuietKat partnership that resulted in a high-power and high-speed electric mountain bike that was likely closer to Jeep Wrangler territory, though you could buy 10 of these electric scooters for the price of one Jeep e-bike.

It’s great to see Jeep expanding their electric bike and scooter presence, but this doesn’t appear to be the thrilling ride I thought it was going to be.

Maybe the power rating is under-spec’d and perhaps it feels pretty powerful in real life. Without having tested it, it’s hard for me to vouch for the scooter’s off-roading merits.

From the looks of the spec sheet though, I’m wondering how well this thing can perform on real trails.

But who knows, maybe it’s a Jeep thing?