When you hear about Razor scooters, you probably think back to the scooter craze of the early 2000’s. Those little metal scooters were everywhere in my neighborhood, and nary a child on the street refrained from begging their parents for one.

Well now Razor is back, and this time they have something for parents too: the new Razor E-Prime electric scooter.

Even though you might not have heard about Razor in a while, they’ve been hard at work putting out a number of new electric scooter models. Besides their electric scooter share model, which is taking on big shots like Bird and Lime, the Razor E-prime electric scooter is their main commuter scooter meant for teens and adults.

They have always had a nice selection of electric scooters for kids and teenagers, but the Razor E-Prime is the one I wanted to review. Its low $379 MSRP makes it the most affordable electric commuter scooter on the market. I hoped to see how it would stack up against many of the other electric scooters that are popular among commuters.

Upon receiving the E-Prime, unboxing was super simple.

The only assembly required was to bolt the handlebars onto the stem, and they include the Allen wrench for anyone who doesn’t have a tool kit.

Of course with the number of e-bikes, e-scooters and e-everythings I have, plus my eclectic assortment of Ikea furniture, I must now own a collection of a few dozen 5 mm Allen key freebies.

The first thing to know about the Razor E-Prime is that this isn’t a high powered electric scooter. It will get you where you need to go, but not with insane acceleration.

The company hasn’t disclosed the exact wattage of the motor, but I can tell you it’s not over 250 W. Its top speed is approximately 15 mph (25 km/h).

The E-Prime has a 36V battery, but again, the company doesn’t disclose the exact specs so I can’t tell you the capacity.

Razor does say the scooter has enough capacity “for 30-40 minutes of riding”. Not enough for long pleasure cruising, but likely sufficient for any last mile-type trips.

The handlebars are adjustable for different rider heights.

The wheels use 8″ airless tires, designed to avoid getting a flat.

Braking is accomplished via motor braking or a rear scrub brake activated by the rider’s rear foot. 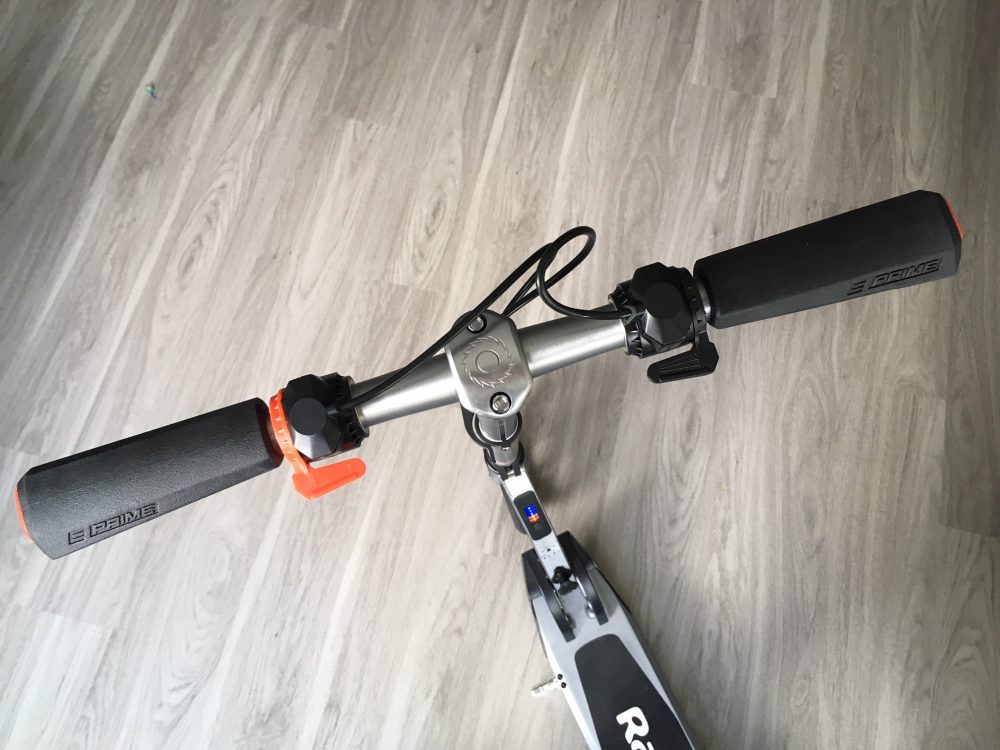 There’s a charging port under the deck with a waterproof cover that is impressively hard to pull off. It’s got a nub that has to be forced in. On the plus side, you could probably dunk the scooter and water wouldn’t get into that port. On the other hand, it’s not super easy to open. I imagine that unless you ride in a wet environment a lot, you’ll probably just end up leaving it open.

I know that a lot of people will look at the sub-$400 price and think “alright, well there’s a disposable scooter”, but let me put that thought to rest. The Razor E-Prime definitely feels well made and properly put together. I can jump up and down on it without it feeling like its going to fall apart. I’m only about 150 lbs (68 kg)  and the company rates the scooter’s carrying capacity at 176 lbs (80 kg), so keep that in mind. But it definitely isn’t a throwaway scooter. It’s well designed and feels built to last.

The E-Prime accelerates decently quickly, though you aren’t going to win any drag races with some of the larger scooters on the market.

Despite taking a few additional seconds to get up to speed, the E-Prime has no trouble reaching almost 15 mph (25 km/h).

Once you’re at that speed, the scooter handles nicely. Its deck is lower to the ground than many other scooters, making the ride more stable. This is especially noticeable in turns, which feel quite solid.

Speaking of solid, the 8″ wheels are solid, airless tires. That’s great for maintenance since you’ll never get a flat. However, the lack of suspension and rigid tires means that all the bumps are transferred up through the scooter to the rider.

While riding on smooth bike lanes and nicely paved roads, the Razor E-Prime glided nearly effortlessly. But on sidewalks with large, repeating cracks or in areas with potholes, the ride quality was less than optimal. Its getting pretty cold up here in the Northeast so I was wearing gloves while riding. That helped dampen the vibrations transferred up the handlebars on uneven terrain. But without gloves the ride would have been worse.

Rides beautifully on smooth surfaces, less so on bumpy ones…

That doesn’t mean you can’t ride the scooter on imperfect surfaces. When I review a personal electric vehicle like a scooter, I always like to push it hard to get an idea of what the scooter can handle. I was riding over nature trails and hopping tree roots on the Razor E-Prime. It can absolutely do it, it just won’t be nearly as comfortable as an electric scooter with suspension or air filled tires.

The braking on the Razor E-Prime could certainly be stronger. By itself, the motor braking isn’t powerful enough to feel comfortable in an emergency stop. Same for the foot brake. Together, the two bring me to a stop fairly quickly, but it’d be nice if just one could do the job alone.

The Razor E-Prime will absolutely get you where you’re going. So if you are trying to find a decent personal electric vehicle without breaking the bank, this could be the one.

The range isn’t what I would call incredible, at around 7 miles (11.2 km). This isn’t a long range scooter. But then again, I don’t think it’s meant to be. Filling it full of more battery would push its price out of “the most affordable scooter I’ve tested” territory. The E-Prime is designed for short jaunts – trips that are too long to walk but too short to drive. As a keep-it-in-your-trunk kind of vehicle, this scooter would be perfect. Cheap enough that you don’t have to worry about using it every day to justify the price, but effective enough to get you from one side of the city to the other.

For such a low price, can you really ask for much more than that?

Let us know what you think of the Razor E-Prime electric scooter in the comments below.