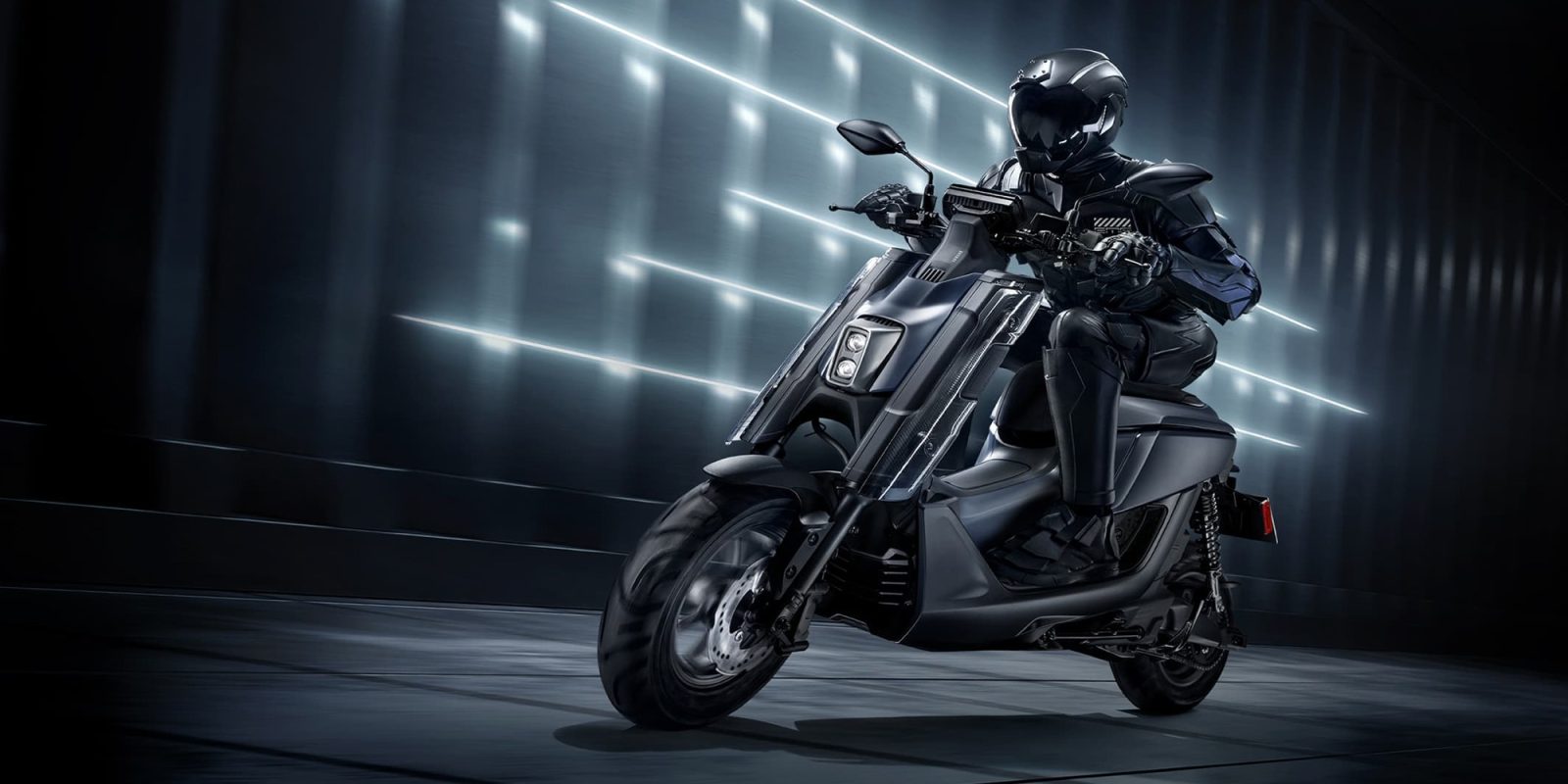 The new electric scooter is known as the Yamaha EMF, and it carries a seriously striking design.

From the futuristic body panels straight up the fork to the stacked headlights and even the afterburner tail lights, it certainly looks unlike anything Yamaha has built before.

The company hasn’t listed complete specs for the vehicle, but has revealed that it runs a 7.6 kW mid-mounted motor. It appears to use a final chain drive to the rear wheel, which wears a 130/70-10 tire.

Four piston hydraulic disc brakes with a Combined Braking System (CBS) for safety bring the scooter to a stop quickly.

Acceleration is claimed to be quite peppy, with Yamaha boasting a 0-50 km/h (31 mph) time of 3.5 seconds. The company hasn’t shared the scooter’s top speed yet.

The scooter also features an interesting storage compartment between the rider’s feet.

It appears to include a cupholder as well as room for small items, but does not look like it locks when in the closed position.

Powering the Yamaha EMF are Gogoro’s own batteries, which are designed to operate within Gogoro’s battery-swapping network.

GoStations that contain dozens of batteries are placed strategically throughout cities to allow riders to swap in a freshly charged battery when their own becomes depleted.

In Gogoro’s native Taiwan, where Yamaha will be first releasing the new EMF, there are nearly more GoStations than gas stations.

Gogoro’s swappable batteries have become popular among scooter manufacturers as a way to bypass battery development. They allow manufacturers like Yamaha to fast-track electric scooter designs by building around an existing battery architecture instead of reinventing the wheel (or the battery).

In Taiwan, 98% of electric two-wheelers use Gogoro’s batteries, and the company has been listed as the international leader in battery swap architecture.

This isn’t Yamaha’s first dance with Gogoro. Back in 2019, the two partnered for the first time when Yamaha unveiled the EC-05 electric scooter. That scooter also used a pair of Gogoro’s batteries.

To get a better look at the new Yamaha EMF electric scooter, you can check out the company’s launch video below where a Power Ranger seems to take it for a late-night joyride.

Good for you, Yamaha. It’s never too late to get your head in the EV game. It’s late, don’t get me wrong. But it’s not too late. And partnering with Gogoro is a smart way to help speed up the process.

I think we’re going to be seeing a lot more of this, and I like it.

Gogoro already has an awesome battery-swapping system, and it makes sense for OEMs to hop in bed with the company to speed up development of their own electric two-wheelers.

I’d love to get a half dozen Gogoro batteries to power my electric mini-pickup truck. Now that’d be the future!