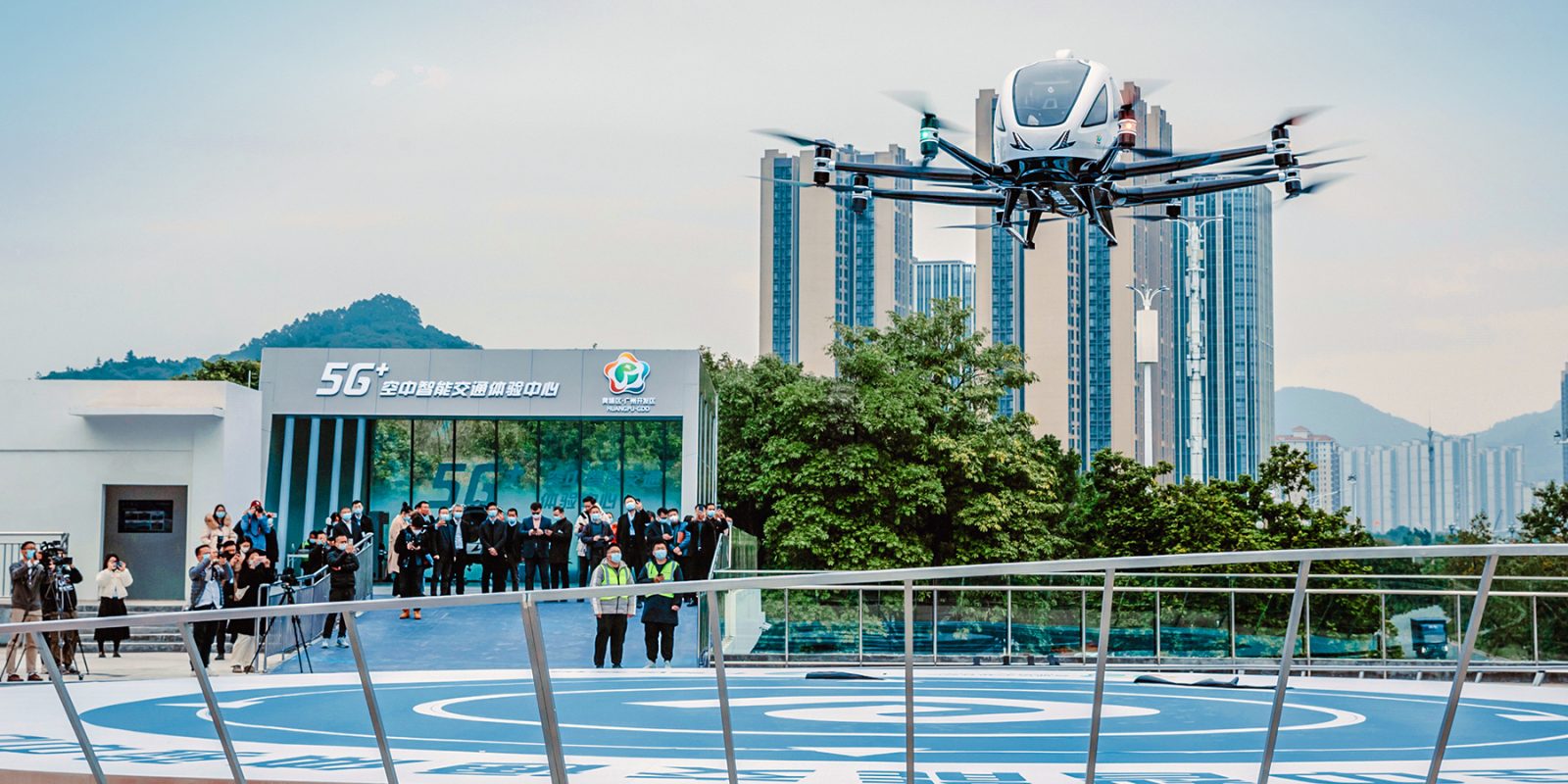 The Chinese city of Guangzhou was been chosen as a first-of-its-kind “pilot city” for a low-altitude aviation, eVTOL-powered transportation network that would shuttle passengers and goods around back in 2019. It’s a proof of concept, in other words, to prove whether eVTOL vehicles can safely, reliably, and efficiently keep the economy of a city going. This new hub is the latest addition to the ever-expanding project.

Named the 5G Intelligent Air Mobility Experience Center, the vertiport includes rooftop takeoff and landing capability for autonomous aircraft (automated aerial vehicles, or “AAVs”) as well as a hangar to be used for vehicle storage, charging batteries, or any required maintenance.

“We are very excited about exploring the various meaningful ways in which AAVs can solve some of the stressors our congested cities face,” said Hu Huazhi, EHang founder, chairman, and CEO. “We are in conversations with other cities, not just in China, to develop safe, efficient and affordable autonomous air transportation.”

What EHang is up against

The dream of flying cars has been around for a long time, but getting it off the ground (sorry) has been difficult, to say the least. That’s partly down to the safety concerns associated with riding in a lightweight, pilotless aircraft hundreds of feet in the air. If the AAV breaks down, it’s likely there won’t be anyone on board who’d be able to safely “glide it down,” assuming there are even controls on board to make that possible. Safety, therefore, is a real concern.

To that end, EHang conducted over two thousand flight tests both inside and outside of China to ensure that its AVVs operated safely, even in harsh weather conditions, before beginning to build out the UAM test city project. “Safety has been the top priority for EHang from day one,” said Hu.

The logistics and delivery side of things, too, present a challenge. There are concerns of efficiency gains, cost, and similar questions of safety and reliability. To help answer those questions, EHang is working with both the international shipping giants DHL (through DHL-Sinotrans) and Chinese retail company, Yonghui.

For their part, the early tests seem promising, with the EHang Falcon UAV reportedly reducing DHL’s delivery time for an 8 km trip in Guangzhou from 40 minutes to eight minutes – significant time savings!

Finally, there’s the matter of convenience. Is a trip to an eVTOL “vertiport” going to be more convenient than a similar ground-based mode of transport? In a country with a well-sorted public transit system, that’s not immediately obvious even if you own your own aircraft and don’t have to wait for one to “free up” before you take off.

Study after study shows that autonomous cars behave in a safer, more predictable manner than cars being driven by humans. That’s not true in all conditions, of course, and tragedies can still happen when something unexpected gets thrown at the AI, but as the cars rack up miles and the technology just continues to improve, it’s hard to imagine a world where the same won’t soon be true for light aircraft, as well.

By taking the initiative and launching a pilotless “pilot program” in Guangzhou, it seems like China is leading American cities like Los Angeles in making the flying car a reality. At least for now.