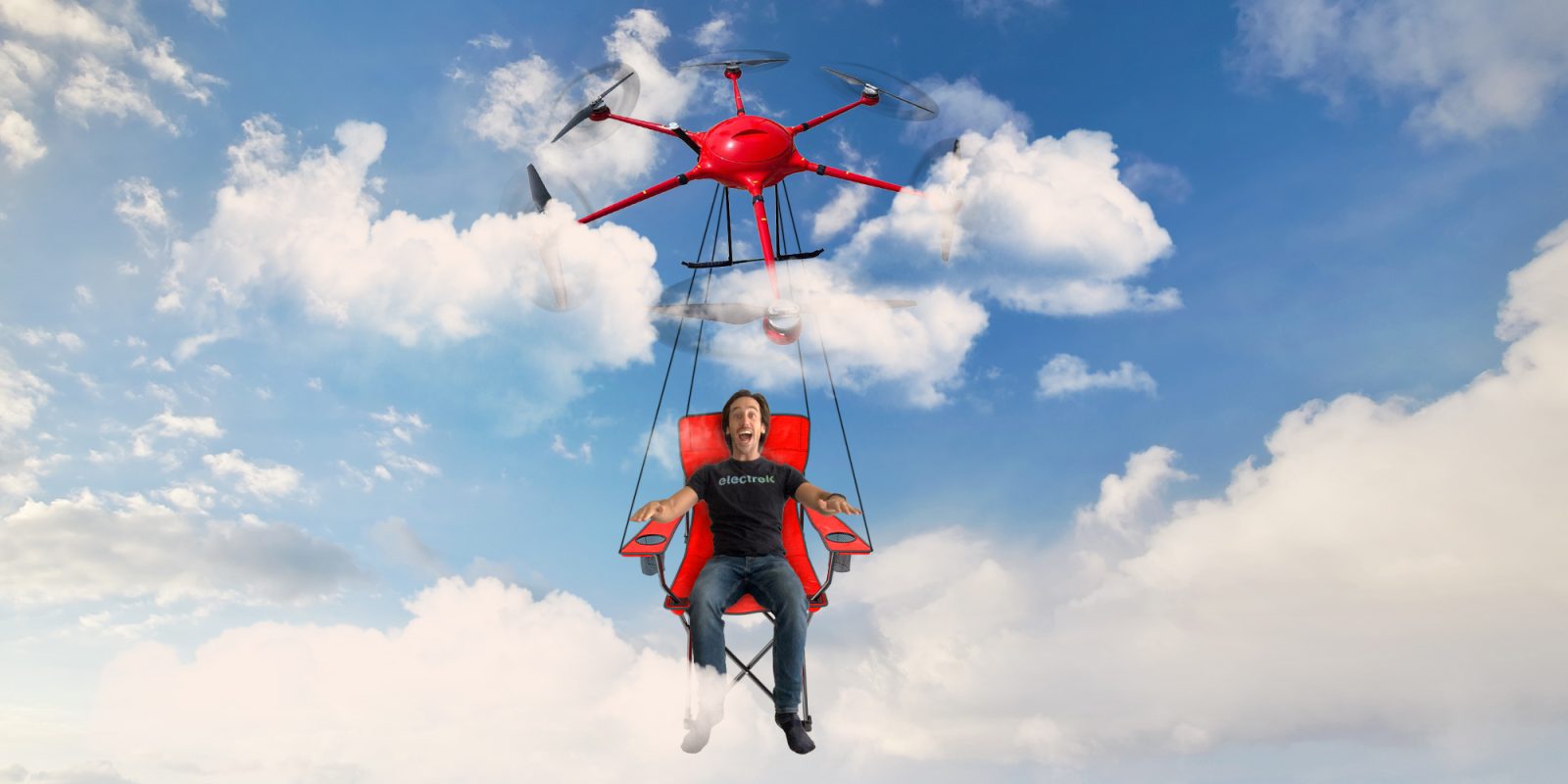 I’ve finally done it, folks! Ever since I started this Awesomely Weird Alibaba Electric Vehicle of the Week column, where I search for crazy EVs on China’s largest shopping platform, I’ve been hunting for an electric passenger aircraft. I was hoping to find some type of ultralight plane, but it’s been pretty tough.

Don’t get me wrong, you can find all sorts of ultralight deathtrap aircraft, but they’re all gas-powered. Alibaba is definitely full of shady-looking EVs that seem near death-defying (remember that one-wheeled electric motorcycle?). But for the life of me, I just couldn’t find an electric aircraft.

So today I had to virtually jury rig one instead. All it took was getting creative with a heavy-lift drone. And so now I present to you the most awful idea in aircraft since the Christmas Bullet.

It all starts with the perfect heavy-lift drone. I found this beautiful model while perusing Alibaba’s drone section.

The $10,000 hexacopter is a carbon fiber multi-rotor drone with six electric motors.

I’m not sure why they still use milliamp-hours when we’re talking units that are in the tens of thousands? Drone industry, I’m still looking for an answer on that one.

But either way, that adds up to 2.84 kWh of stored energy, which is about the size of a light electric dirt bike’s battery. Or as the drone industry would probably write it, a whopping 2,840,000 mWh! Ohh, that sounds good. Now I get it.

Now I know what you’re thinking, “this thing isn’t a passenger-carrying drone!”

Well ok, ye of little imagination. Technically it’s not a passenger-carrying drone… yet. But that’s nothing a bit of rope and a lawn chair can’t fix.

With a heavy lift drone and a new captain’s chair dangling precariously underneath, there’s little this drone can’t do.

Well, except lift me.

Each of the six electric motors carries an 18-inch prop that combine to offer some seriously heavy-lift capabilities of up to 60 kg (132 lb).

The only problem is that I haven’t weighed that little since probably freshman year of high school. At my current 70 kg (155 lb), I have a feeling my flying dreams alone aren’t going to get me off the ground. I’d just have an expensive fan struggling to climb skywards a few feet above my head.

But as long as I can find a sub-60kg volunteer to put his or her life on the line for science, we’ll be back in action!

And action is a good way to describe it, because this isn’t some boring slowpoke drone. It can fly at speeds of up to 72 km/h (44 mph). Now that’s a thrilling ride!

It also has an operational ceiling of 4,000 meters – roughly 2.5 miles. That might sound dangerous, but consider this: at least if something goes wrong at that height, you’ll have the rest of your life to solve the problem.

Speaking of time, I’m not quite sure how long the flight experience will be. Drones’ flight times decrease quickly as payload goes up. The unloaded flight time is an impressive 90 minutes, while that drops to 51 minutes for just 10 kg of weight. If I try to max out the full 60 kg payload capacity, I’m guessing the ride isn’t going to last very long.

That’s fine by me. I came here for a good time, not a long time!

Please don’t try this at home

I should probably add a disclaimer here that you should by no means attempt to actually do something like this. It’s a terrible idea, and it will almost certainly end in disaster.

This Awesomely Weird Alibaba Electric Vehicle of the Week column is a tongue-in-cheek series exploring some of the wilder EVs found on the hilarious Chinese shopping site.

While many of the land-based EVs we’ve found are only moderately dangerous, I wouldn’t take to the skies in something like this for the same reason I wouldn’t head underwater in one of Alibaba’s submarines.

Alright, so we’re clear on this, right? No one’s going to hang onto a drone and go flying, right?

Perfect. So let’s just watch someone else do it instead and get it out of our systems.