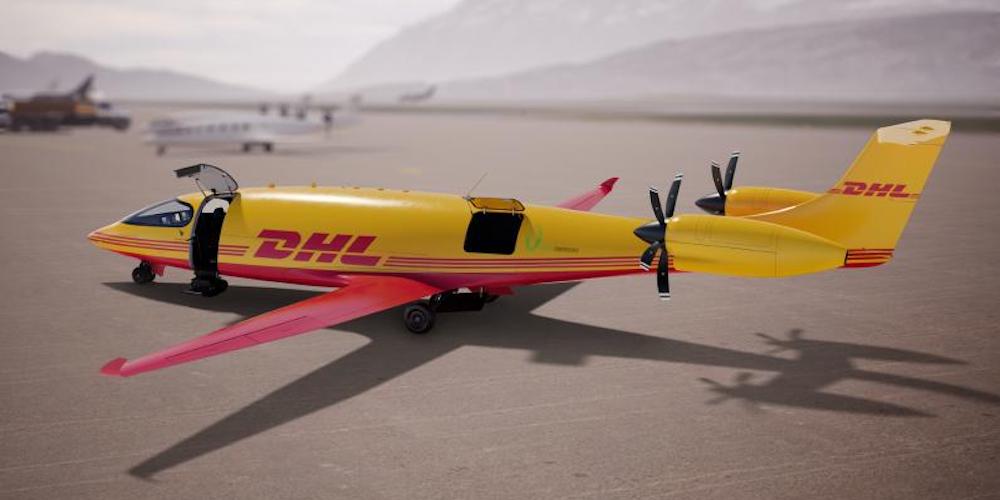 The Alice planes look almost identical, save for some missing windows and seats and an additional 100lbs capacity, to the passenger version of the Eviation Alice plane we’ve talked about in the past, amusingly calling it the “Tesla of Aviation.” It now boasts around 440NM of range or just over 500 miles (800km).

Changing from a V-tail to a T-tail will “optimise performance and handling, making it easy and reliable for pilots to seamlessly transition to flying the aircraft”.

Eviation also confirms Alice will use two of Magnix’s 850hp (634kW) Magni650 electric powerplants, rather than three 375hp Magni250s. In June Magnix said it was replacing the Magni250 and another previous model, the 750hp Magni500, with two new derivatives: the 469hp Magni350 and the Magni650.

Additionally, figures from Eviation’s website show the company has in recent years tweaked Alice’s advertised capabilities, shaving some 100nm (185km) off its range.

Eviation moved its headquarters from Israel to Seattle but retains most of its Israeli leadership.

DHL plans to build the world’s first electric air cargo network with the electric plane, noting that Alice can be flown by a single pilot and will carry 1,200 kilograms (2,600 lbs). It will require 30 minutes or less to charge per flight hour and have a maximum range of up to 815 kilometers (440 nautical miles).

What’s more important is that Alice will operate in all environments currently serviced by short-range piston and turbine aircraft.

Electric airplanes cut costs (oh and save the planet)

Alice’s electric motors have fewer moving parts to increase reliability and reduce maintenance costs over combustion. Its operating software constantly monitors flight performance to ensure optimal efficiency. Electricity costs a lot less per mile than AvGas or Jet Fuel. The plane only requires one pilot for cargo, saving on human resources. Not to mention it is quieter for noise abatement.

“We firmly believe in a future with zero-emission logistics,” says John Pearson, CEO of DHL Express. “Therefore, our investments always follow the objective of improving our carbon footprint. On our way to clean logistics operations, the electrification of every transport mode plays a crucial role and will significantly contribute to our overall sustainability goal of zero emissions. Founded in 1969, DHL Express has been known as a pioneer in the aviation industry for decades. We have found the perfect partner with Eviation as they share our purpose, and together we will take off into a new era of sustainable aviation.”

“The next time you order an on-demand package, check if it was delivered with a zero-emission aircraft like DHL will be doing,” said Eviation Executive Chairman Roei Ganzarski. “With on-demand shopping and deliveries on a constant rise, Alice is enabling DHL to establish a clean, quiet and low-cost operation that will open up greater opportunities for more communities.”

The commercial passenger version of Alice specs are below and appear to be very similar to the cargo version:

Check out some of the images below:

You love to see it. Short-haul aviation is where we can actually make strides in the next 5-10 years. Long haul will probably require hydrogen if we have to go 0 carbon. There just aren’t battery breakthroughs that are going to solve 10-hour, over-ocean flights in the next decade.

As for this plane, it hits a lot of the right spots, being great for general short-haul aviation. Cape Air in the US has already signed on for its expensive NYC to Cape Cod/Martha’s Vineyard route. I expect to see more of these flying between places like Los Angeles and San Francisco.

Another vector these planes might be able to exploit is flying out of quiet little airports that have noise abatement regulations that are prohibitive to jets or turboprops. Flying an electric airplane overhead is a lot easier to swallow than jet fuel exhaust-dumping dinosaurs currently inhabiting our skies.